Pulling back the curtain for opening night. Restoring the Forrest Theater.

Pulling back the curtain for opening night. Restoring the Forrest Theater. 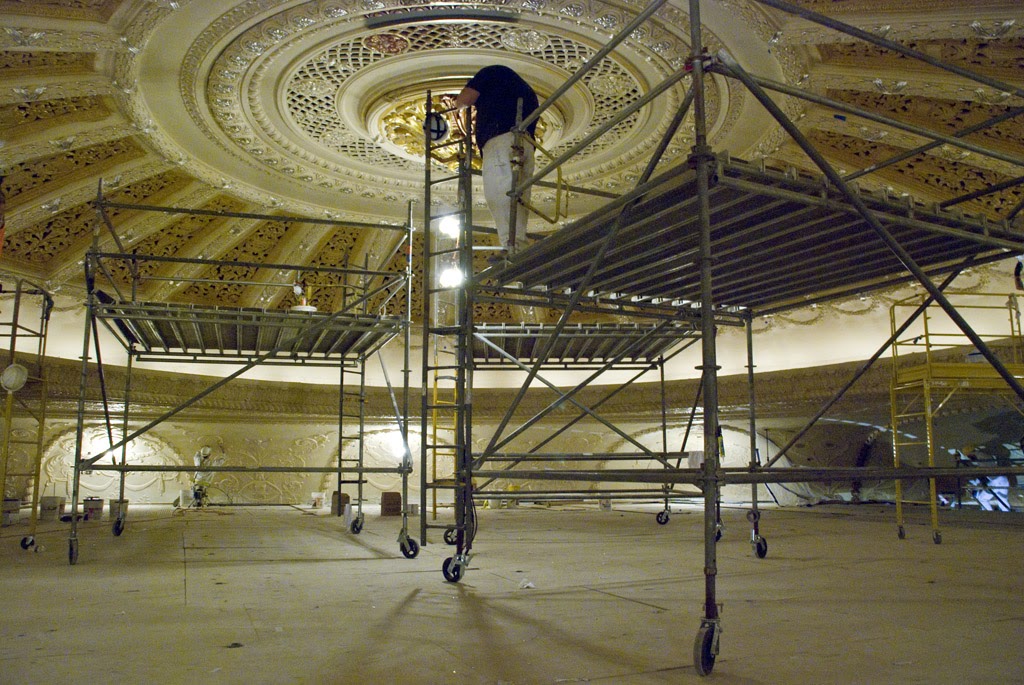 The Forrest Theater is a beautiful, classic, playhouse built in 1928 and located at 1114 Walnut Street in the Center City area of Philadelphia, Pennsylvania. 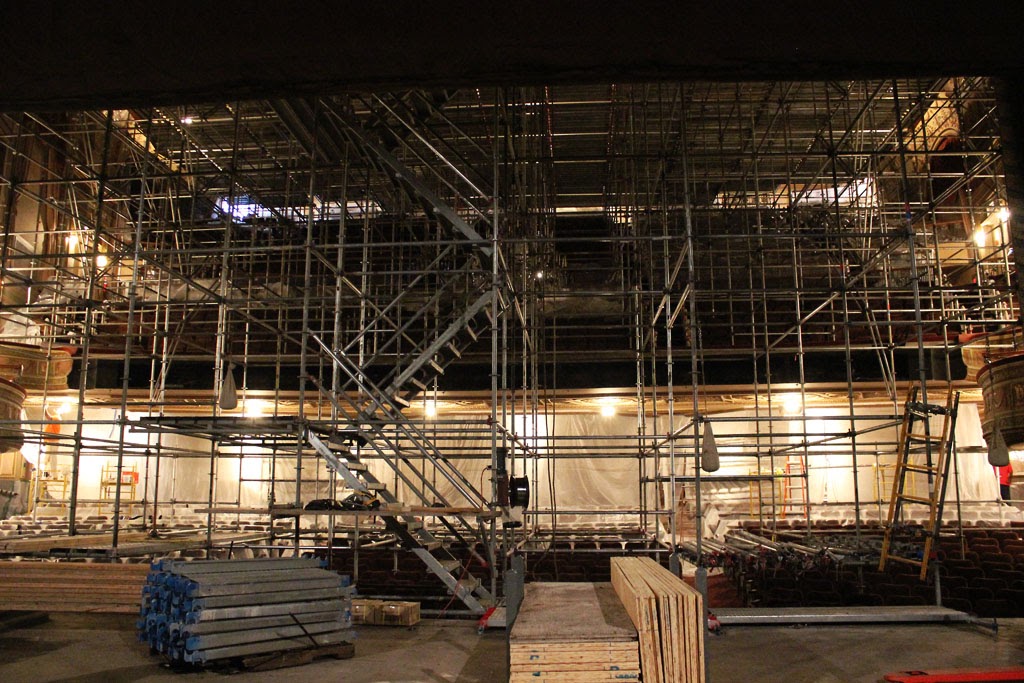 Built at a cost of $2,000,000 it was one of architect Herbert J. Krapps more elaborate theaters. The interior is intricately decorated with gilt detailing (silver gilded with gold) and silk fabrics.  And that’s exactly why Superior Scaffold was brought in.  We provided the painting and restoration crews access to the entire perimeter of the theater, including the walls, ceiling and all surfaces, so they could restore it to it’s former glory.

Crews needed to paint and re-gild the highly detailed, multicolored embellishments and areas that had chipped or faded over time. 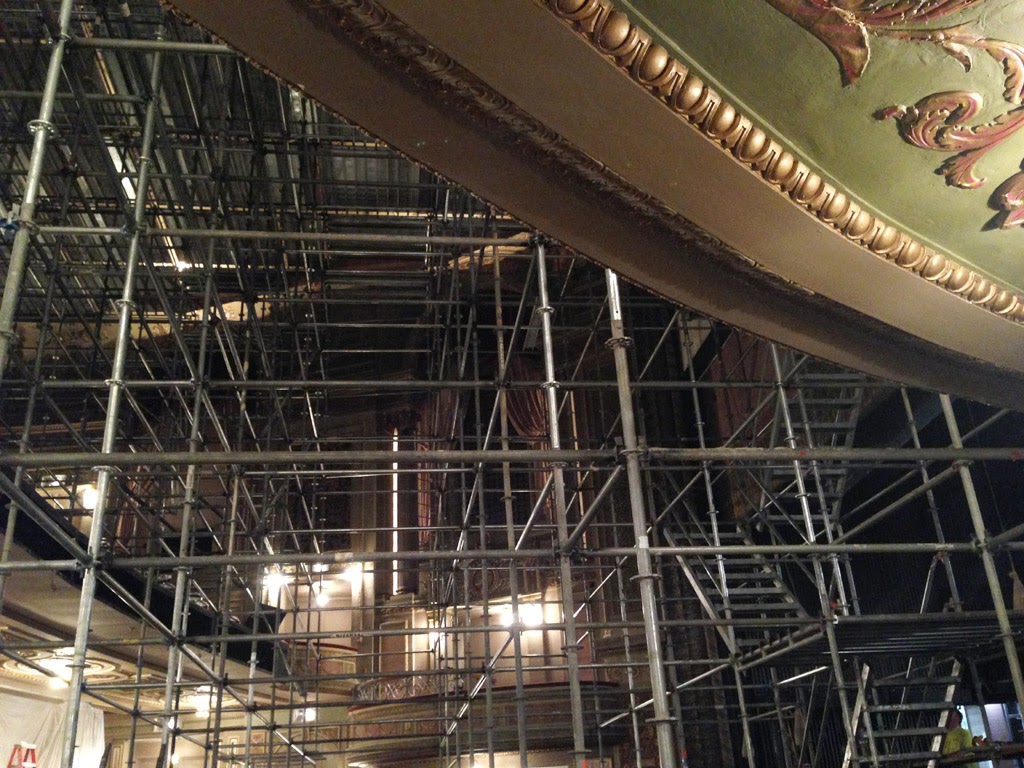 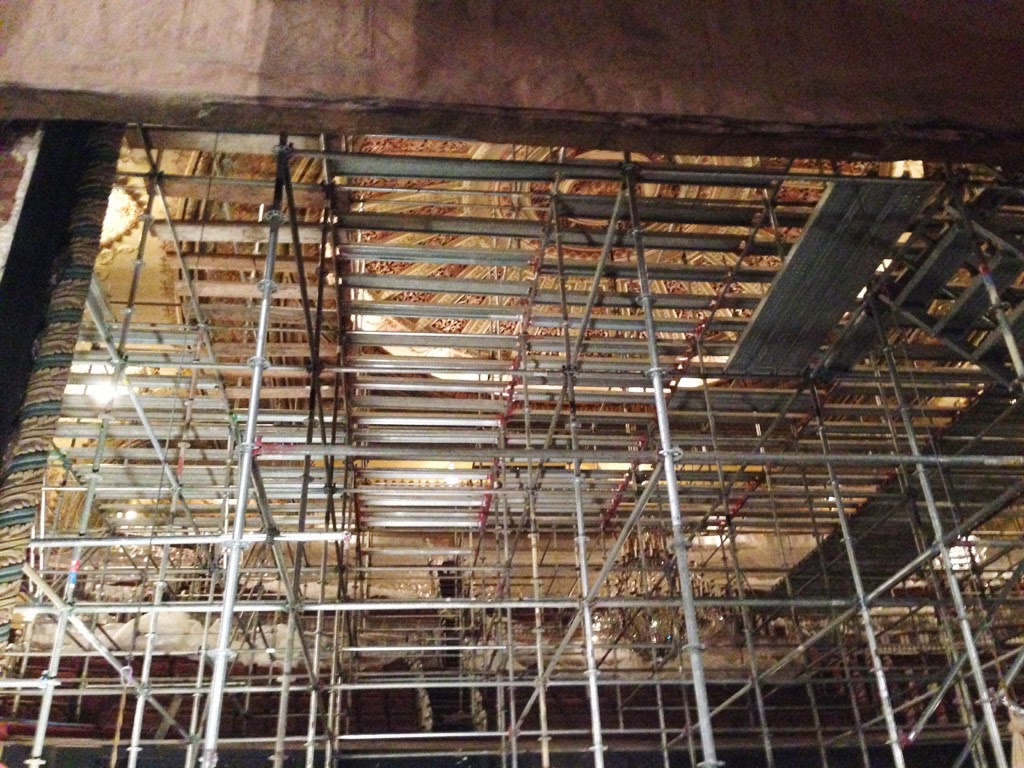 There are so many great pictures; I urge you to scroll down and see them all. 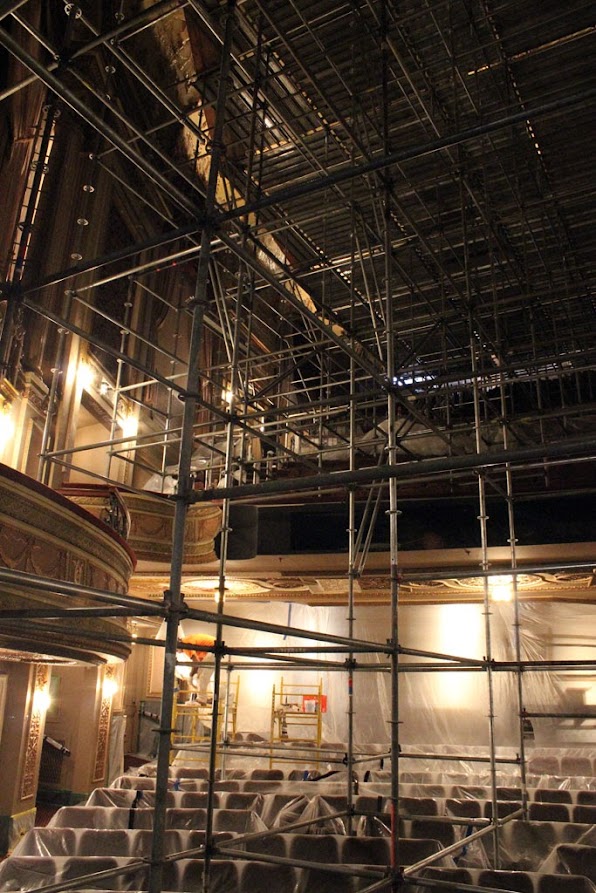 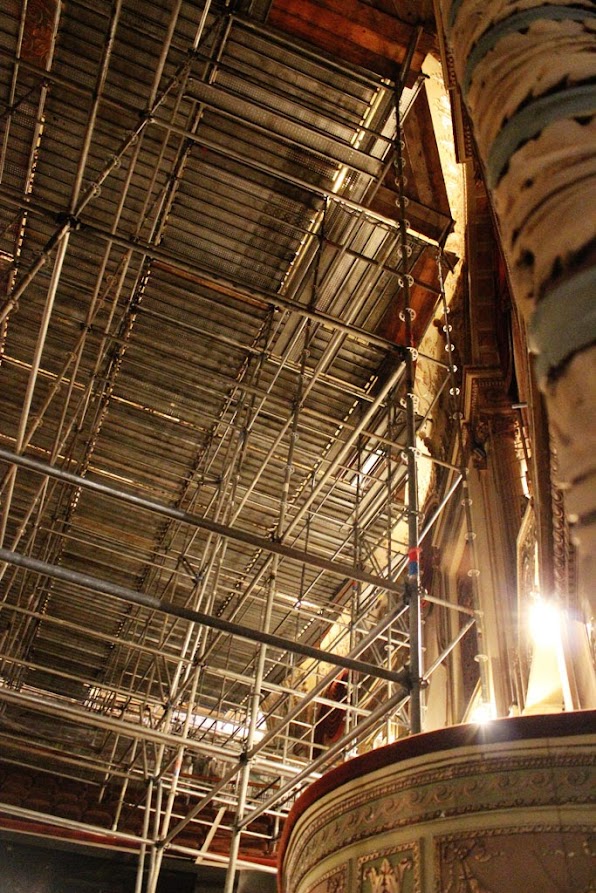 It might look great now but our scaffold crew had some huge challenges to get this built. 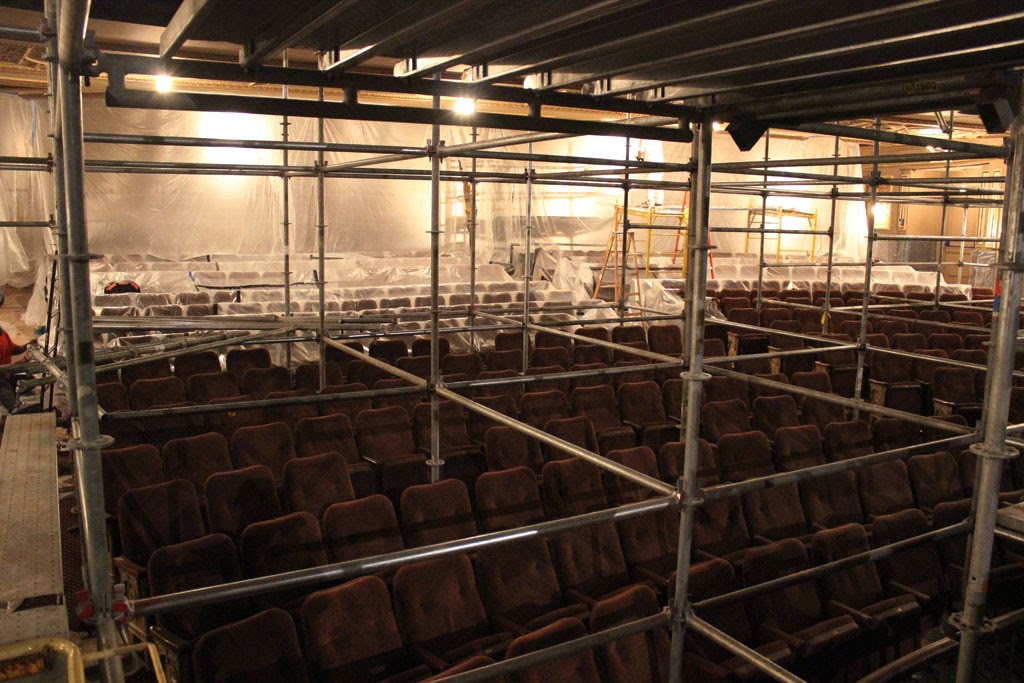 The first big challenge was dealing with all of the theater chairs.  Imagine having to strategically place each of your scaffold legs in between or around the chairs and then build upwards five stories. 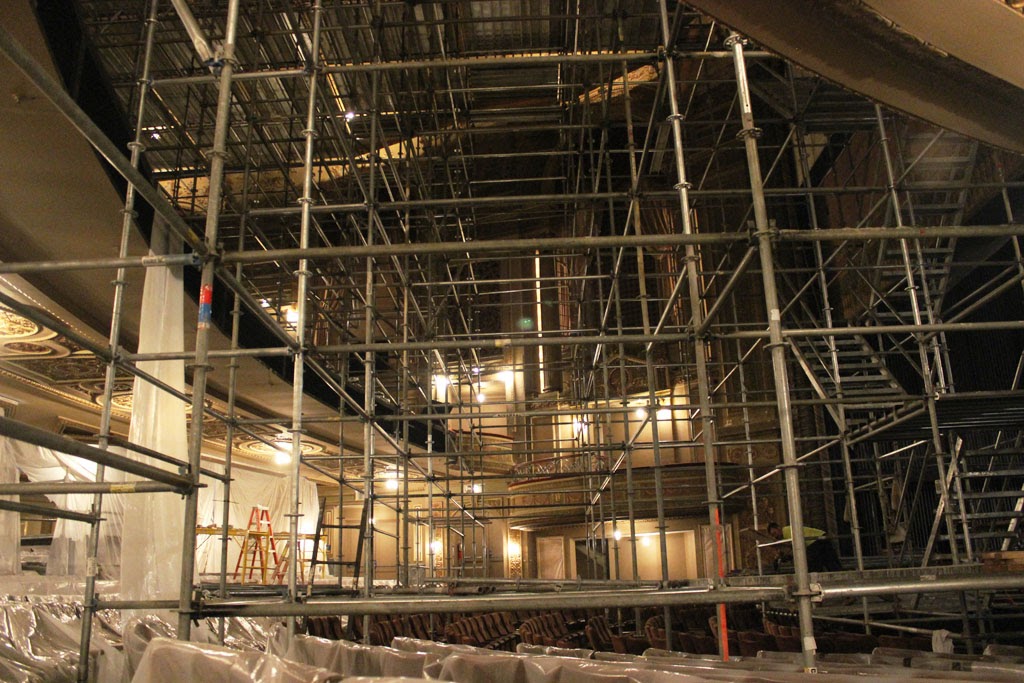 It’s quite the maze the team had to think around while laying it out. 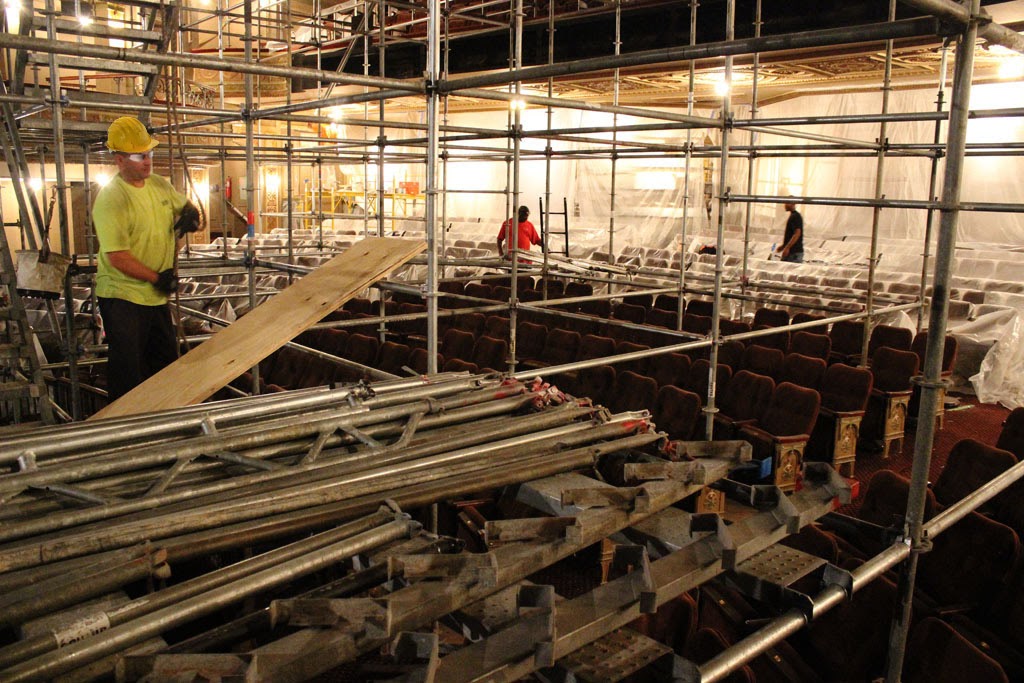 The second was that they had to lay the scaffold out on a radius and as you know we are dealing with straight lines and rectangles. 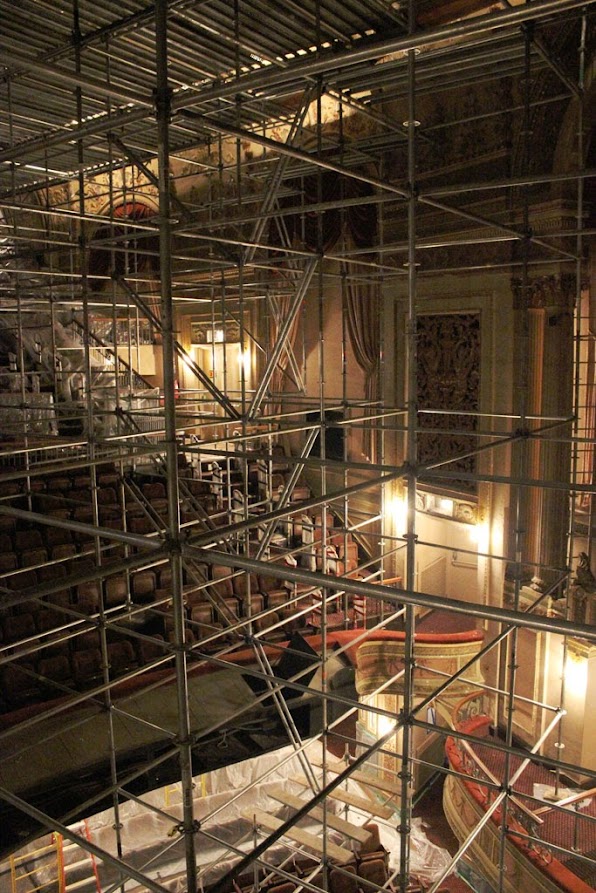 The third challenge was the fact that the theater is on an incline, sloping up and away from the stage.  So everything had to be leveled out so the work platform up top was perfectly flat. 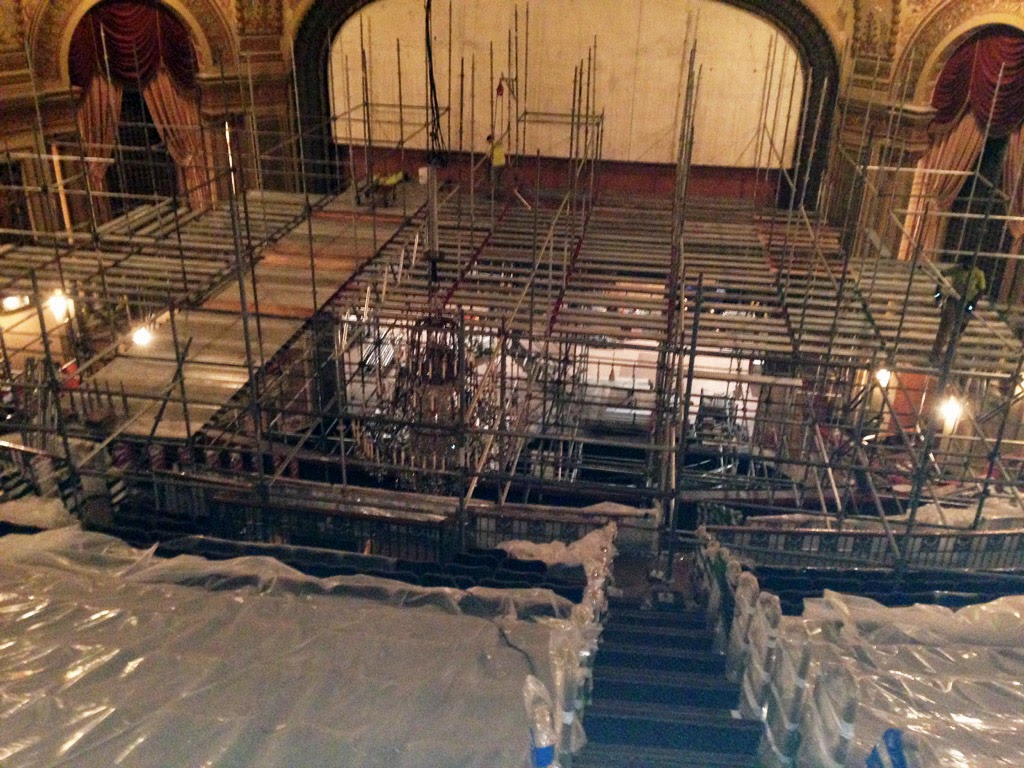 And the fourth was that the scaffold had to continue and seamlessly connect to the lower and upper mezzanine levels. 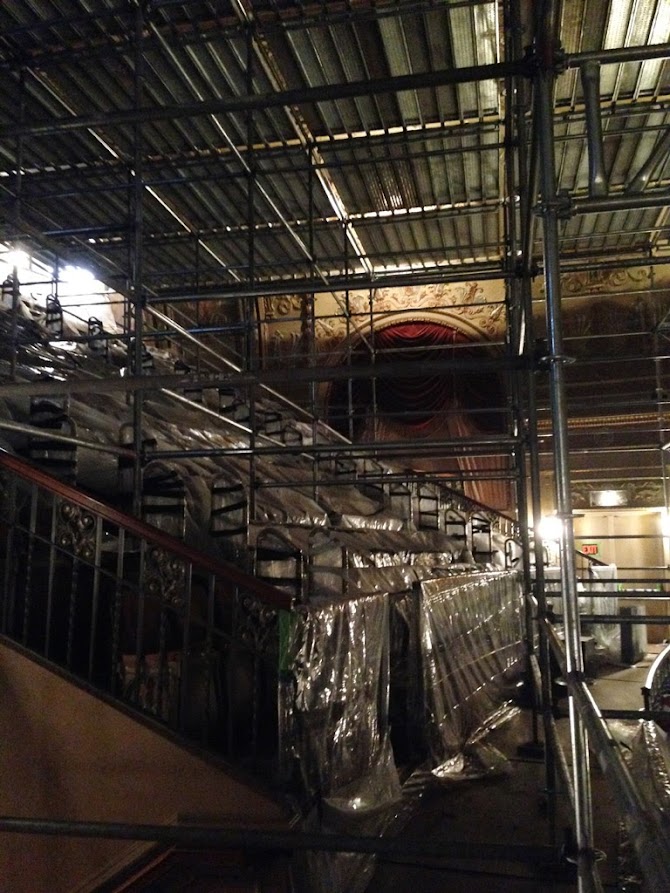 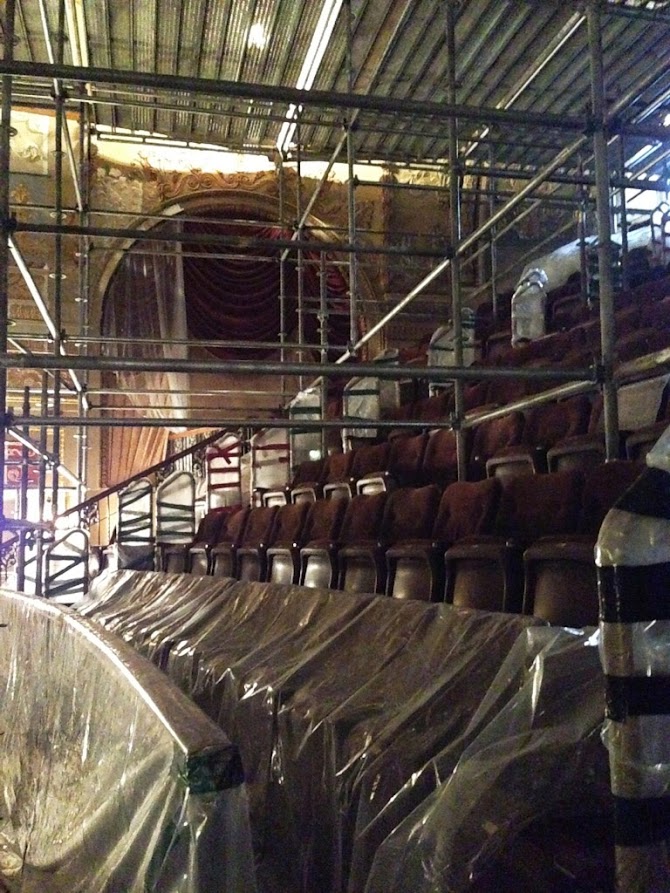 So not only did our team have to build around the maze of chairs and curves but they also had to balance out the difference in elevation and continue it into the balcony so that the dance floor at the top would be level.  Great job guys! 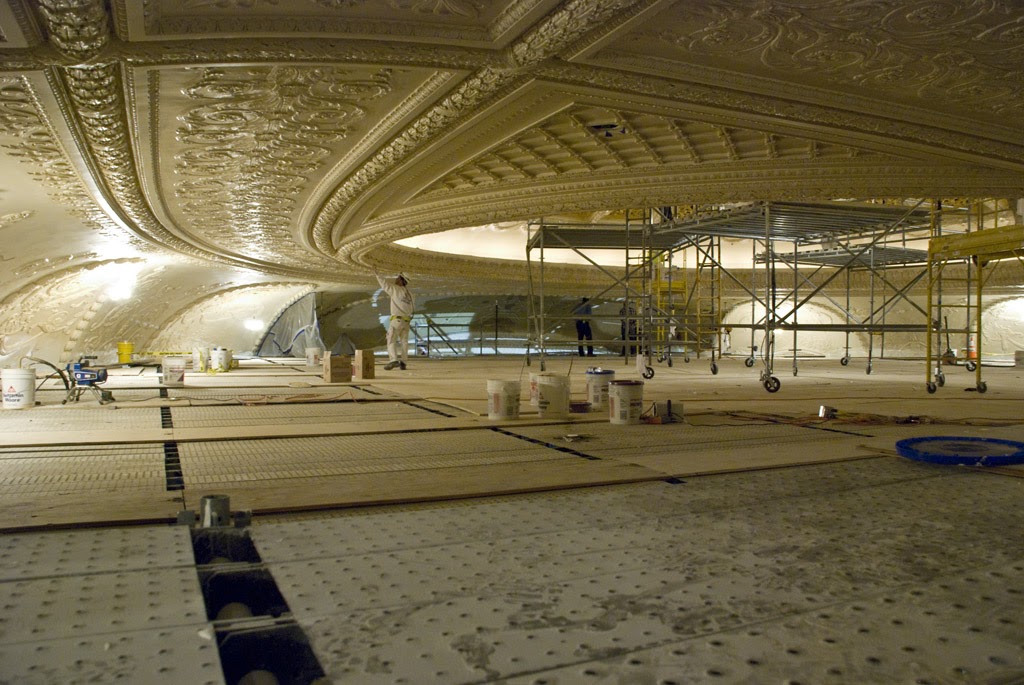 As I mentioned, we erected scaffolding that gave the crews access to all of the surfaces so they could paint and restore it to its former brilliance. 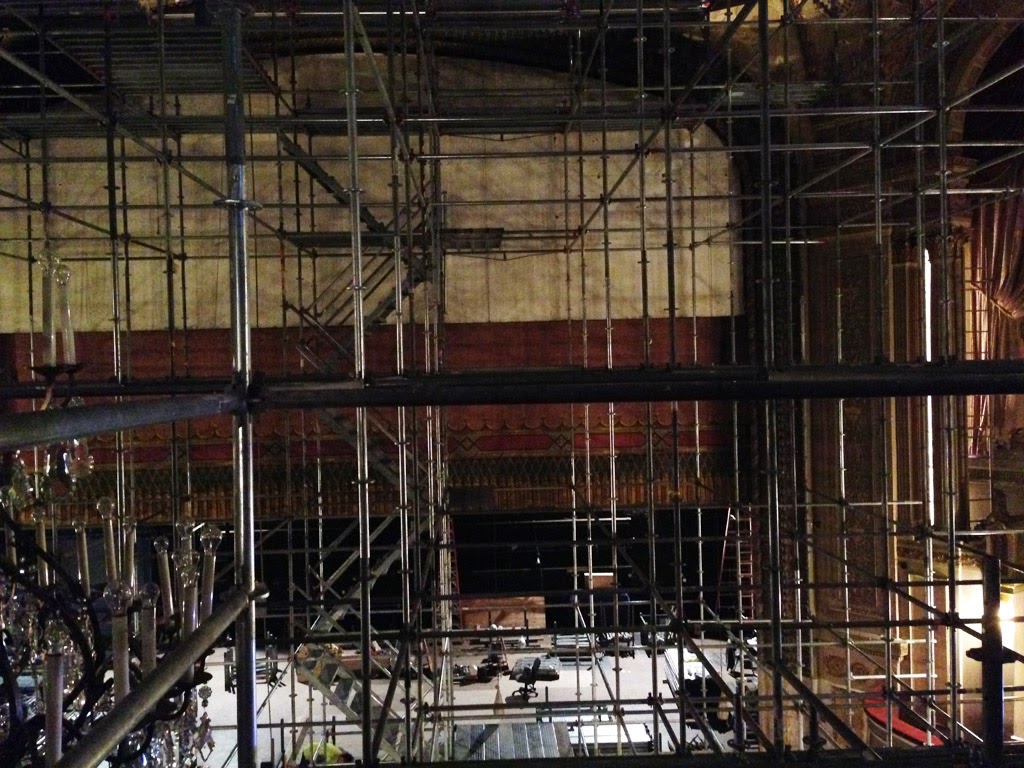 The giant scaffold that we erected in the main part of the theater consists of system scaffold, 2 and 3 foot outriggers, trusses, steel plank, a stair tower for access and a rope and wheel to hoist material.  The elevation is 4’ in the rear and 54’ high in the front of the theater.  It’s 42’ wide across the front of the stage and 92’ wide at the rear. 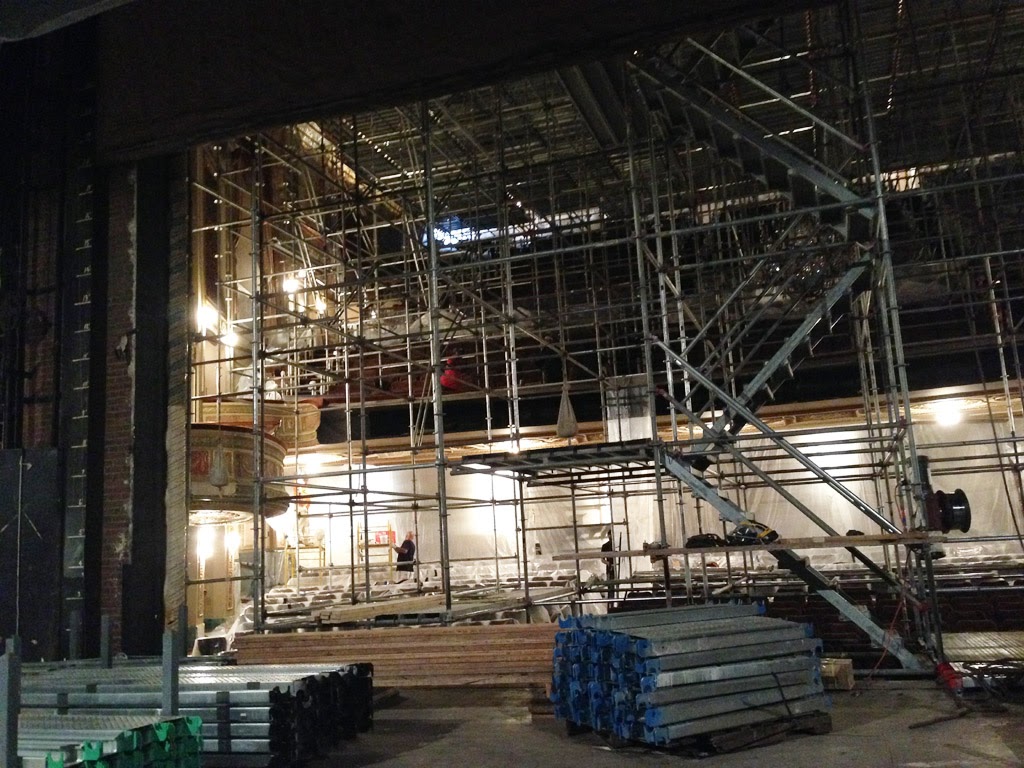 It’s primary purpose was to build this large work platform for the crew to reach the dome. 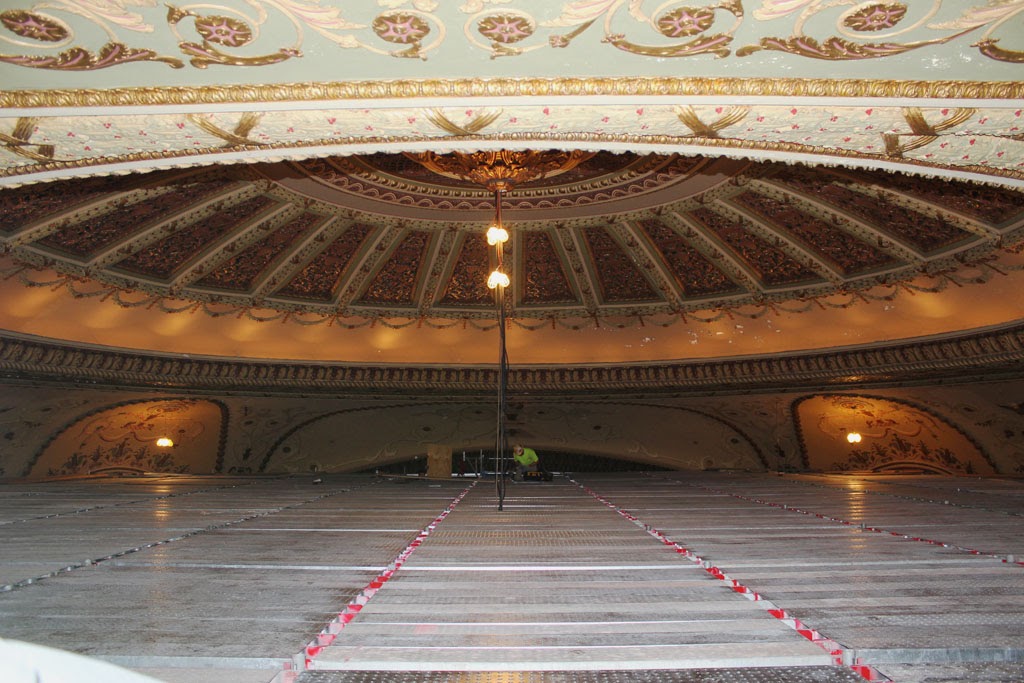 This dance floor consisted of skip plank and plywood. 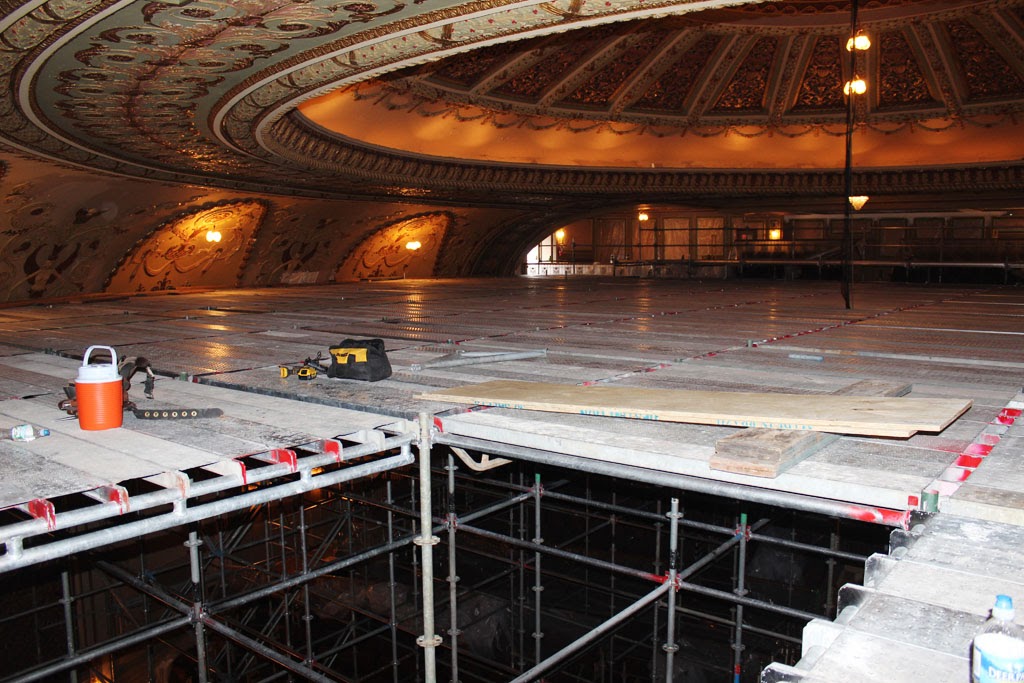 We also gave the crew rolling towers to reach the highest elevations. 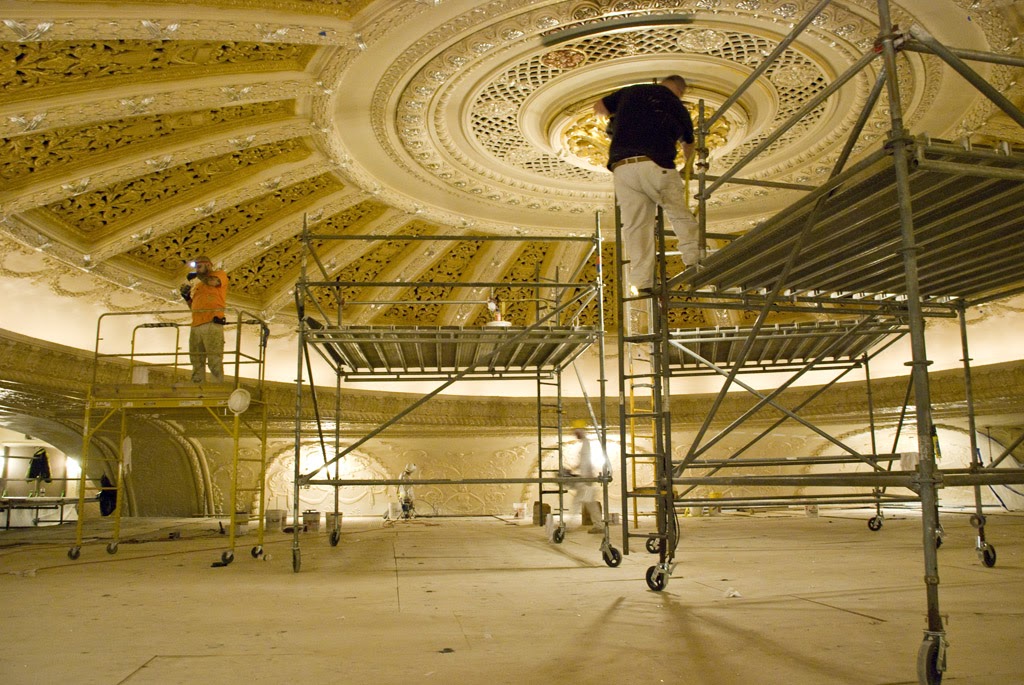 Here you can see them putting the final touches on the incredible ceiling.  It looks amazing.  They are doing a great job! 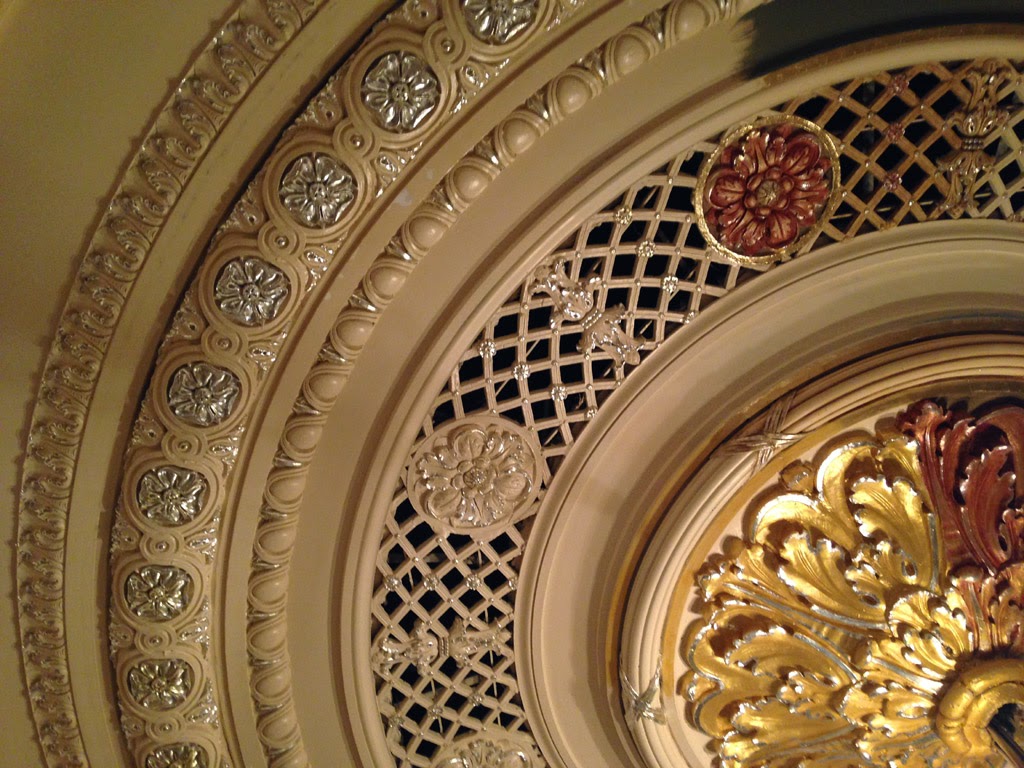 You can see the intricate details of the multicolored embellishments.  I would guess they were made from plaster and not carved out of wood but you just never know. 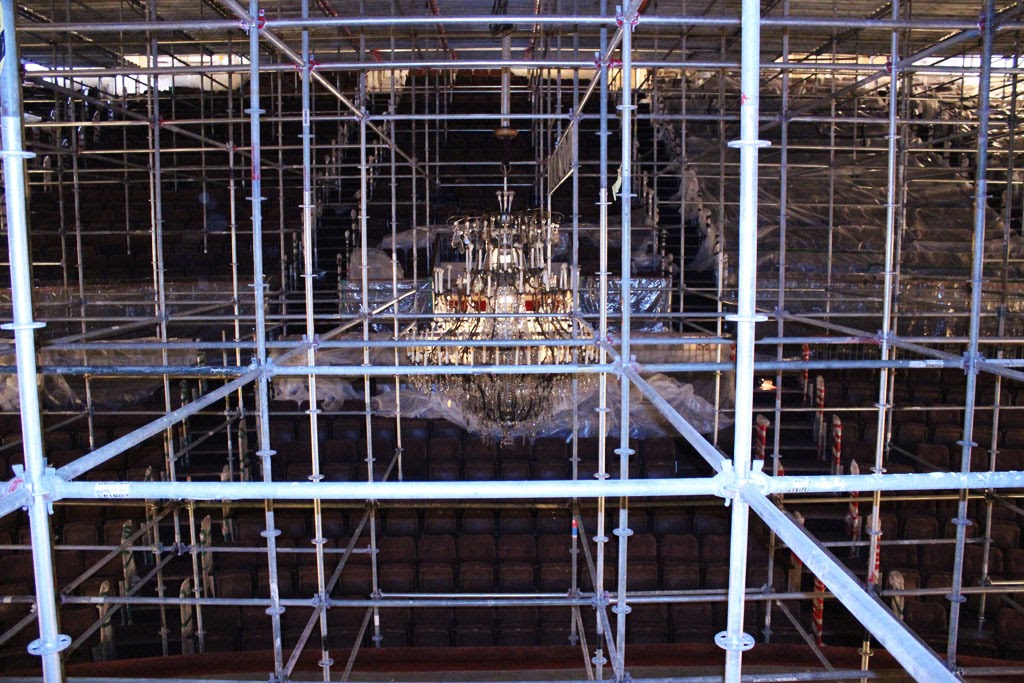 They lowered the chandelier down and out of the way.  We erected our scaffold around this delicate, priceless work of art.  It will be put back into place once the painting and restoration is complete. 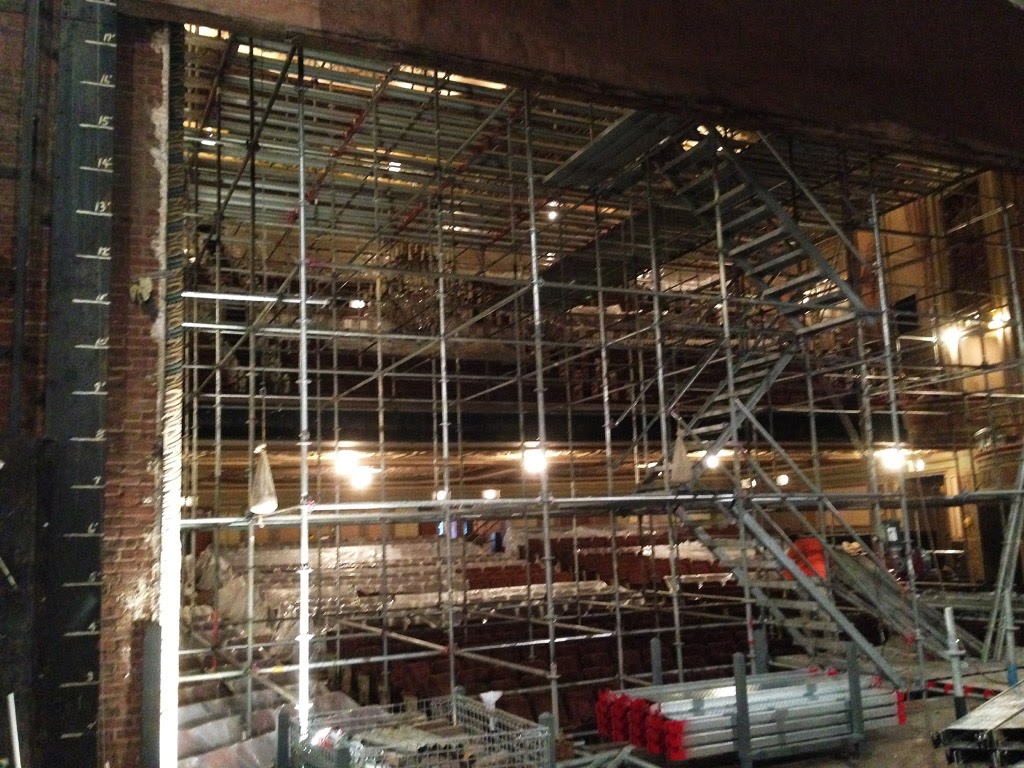 The stage was our lay down area.  We had to get the equipment in from the garage across the alley.  We also provide scaffolding and access in the attic as well.  That will be fodder for another blog.  It’s just too much to detail here. 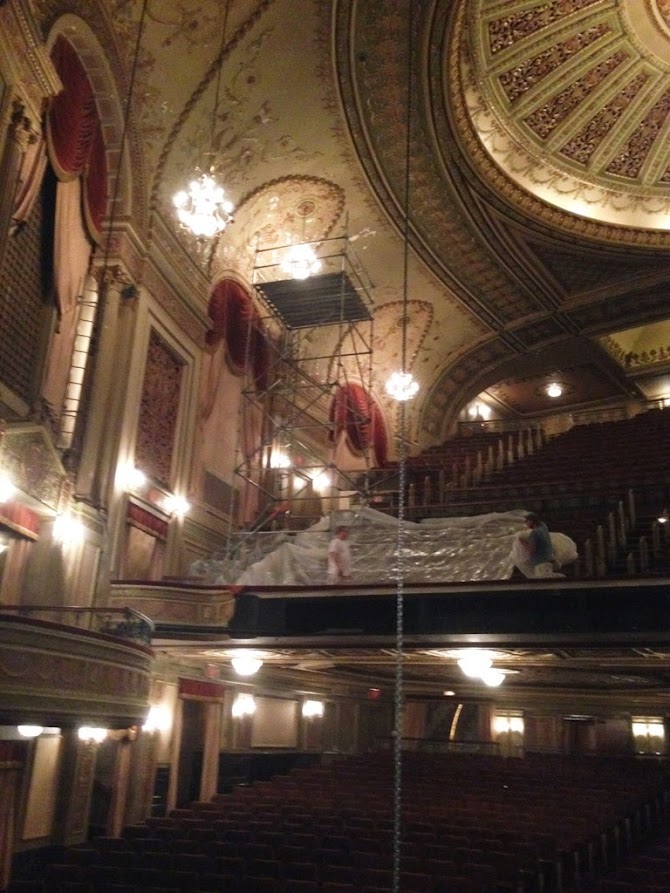 We had been called out the previous season to provide scaffolding in the balconies and perimeter to do some minor touch ups until they could do this entire restoration.  The photo isn’t the greatest but you can see what the theater looked like before. 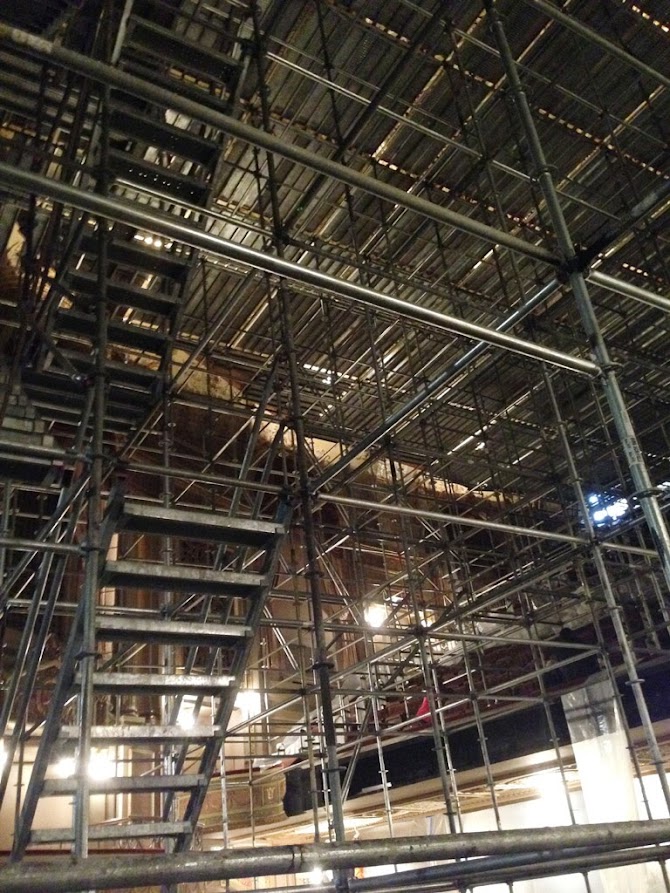 They are racing to meet the opening deadline of April 18th  for Hedwig and the Angry Inch. Everything is on schedule. 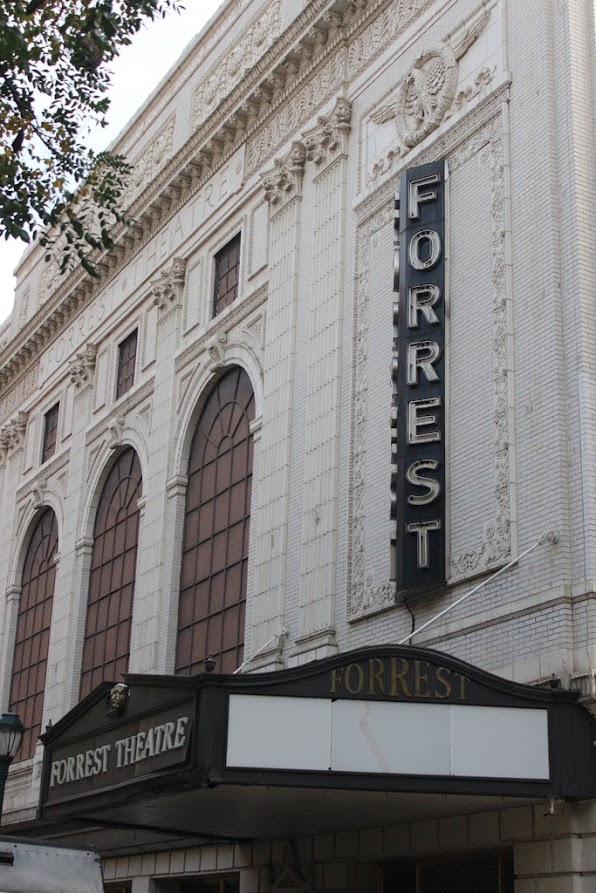 We are so pleased that the Shubert Organization asked us to be a part of this incredible restoration.   For a schedule of upcoming shows or to just stop in the lobby and see the wonderful restoration job visit:  http://www.forrest-theatre.com/ 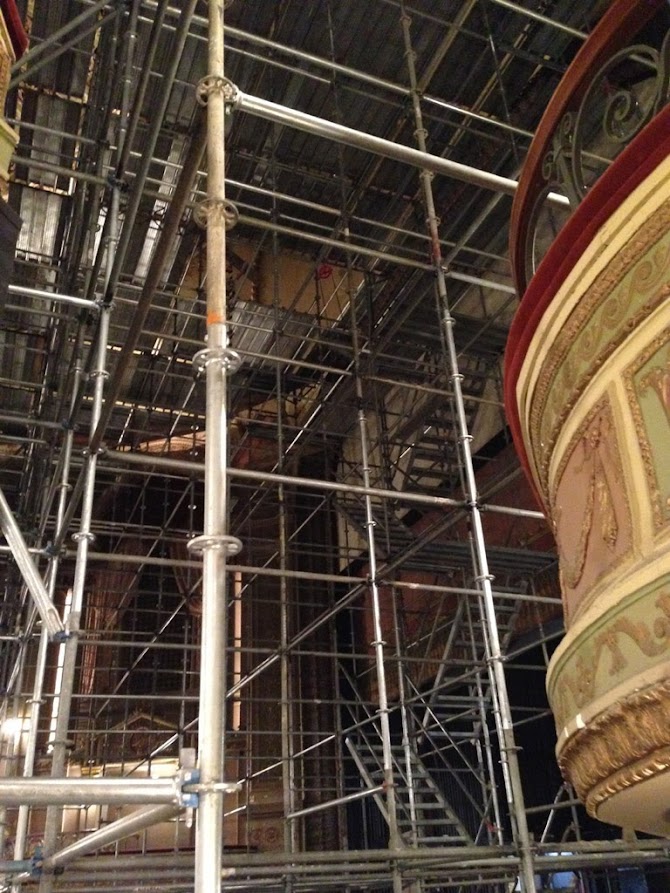 If you need scaffolding or access call Pat at Superior Scaffold today – (215) 743-2200 or visit www.superiorscaffold.com for more information.

The musical number is a perfect fit for today’s blogpost.  As the critics once said, “Geddy Lee sounds like Mickey Mouse on helium.”  I give you Rush!