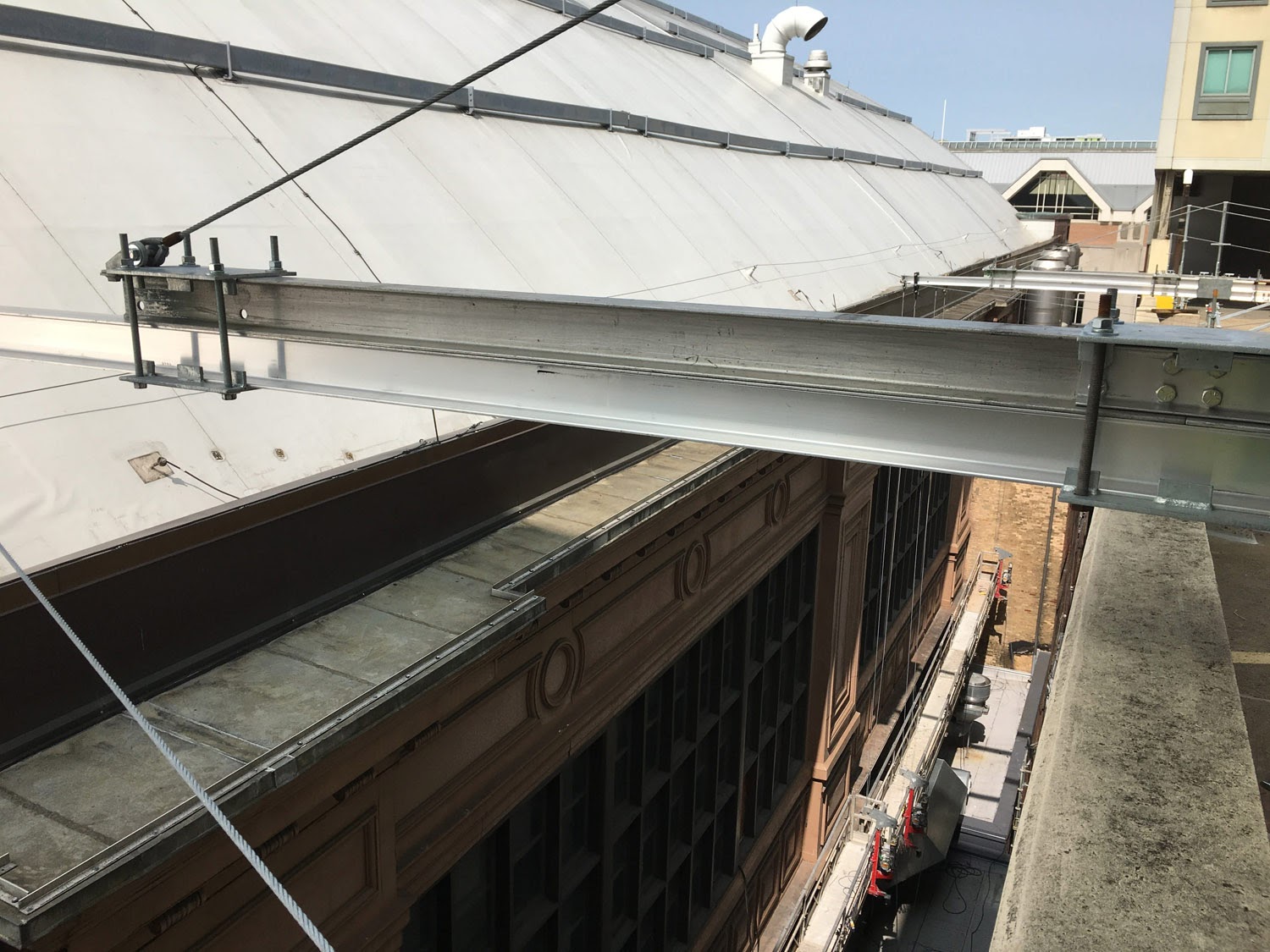 When Premier Building Restoration needed access the to the side of the Reading Terminal Market building for restoration, they realized they had a big challenge on their hands.  There wasn’t much room and the lower roofs didn’t have the structural steel to support a big scaffold, or any scaffold for that matter. To top it off, the dome-like curved roof and jutting cornice wouldn’t allow traditional roof rigging. 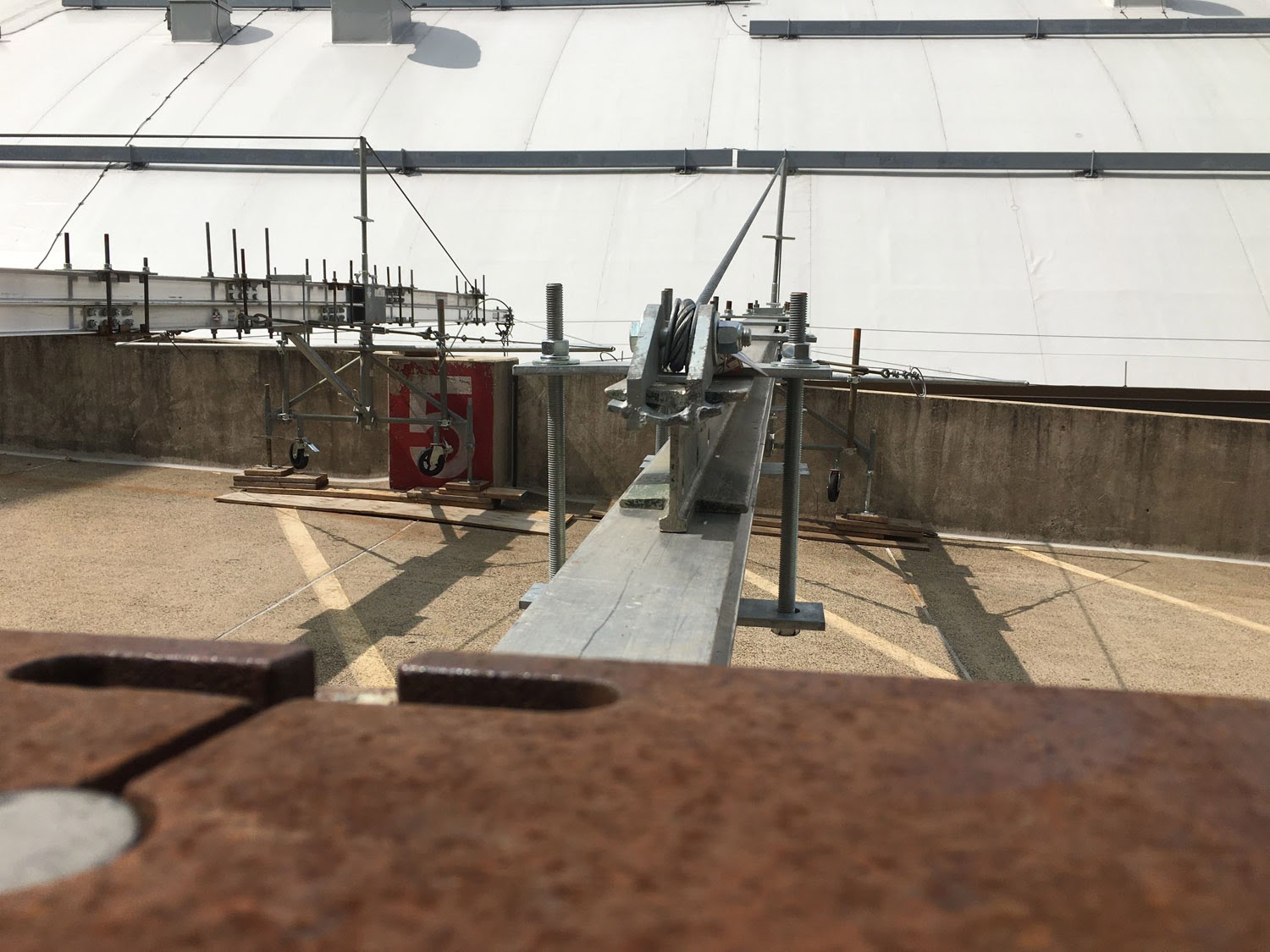 So how could they get their crew to the facade of the Reading Terminal Market to restore windows, masonry, pointing, caulking, you name it? 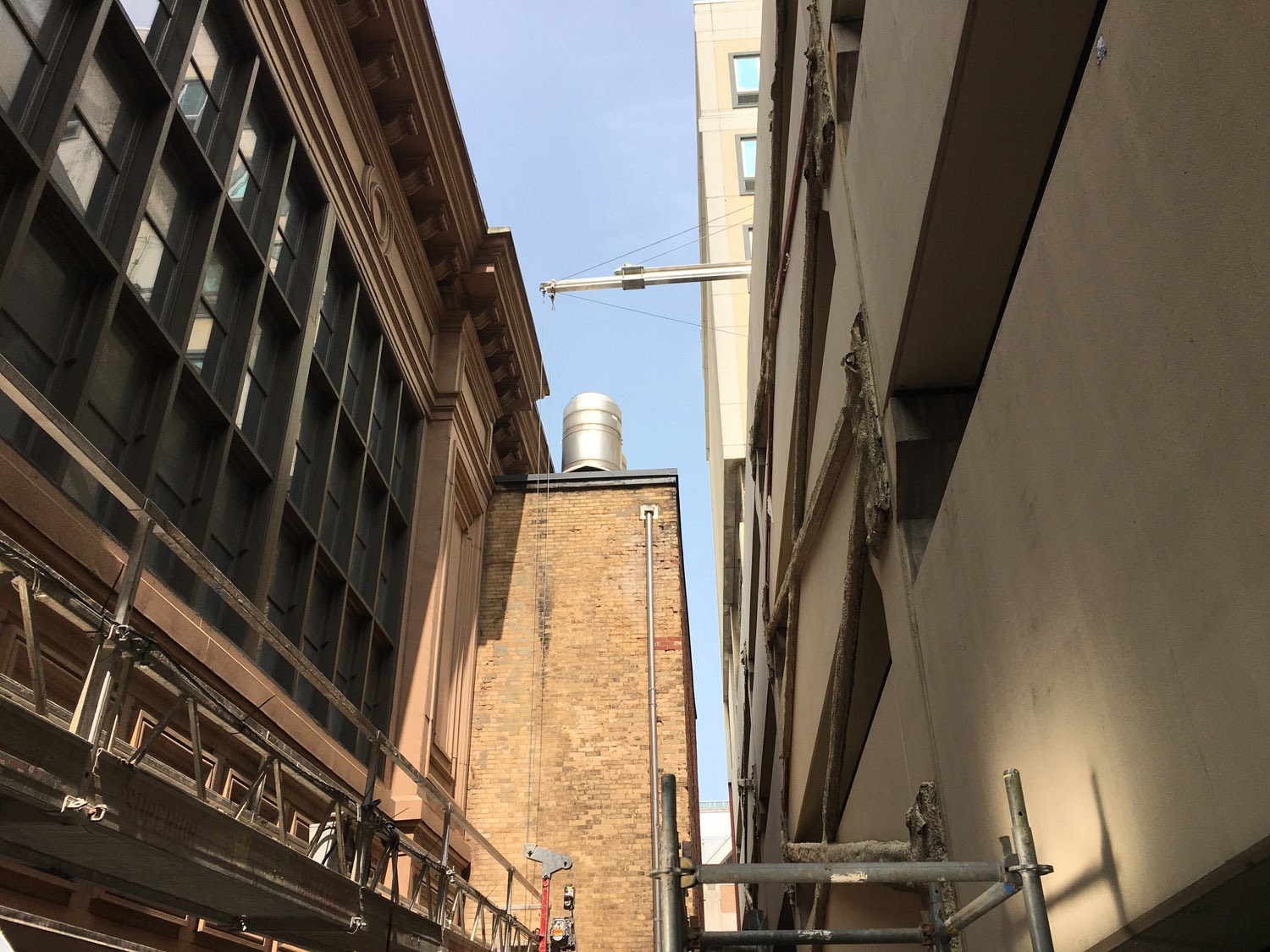 They called Superior Scaffold. And as Bob, “King of Swing”, Sarkisian was on the ground in the alley in between the two buildings… He looked back… Not to the past, but literally, right behind him, and then he got that look in his eye. The look he gets when he figures out how to accomplish a task that NOBODY ELSE could figure out 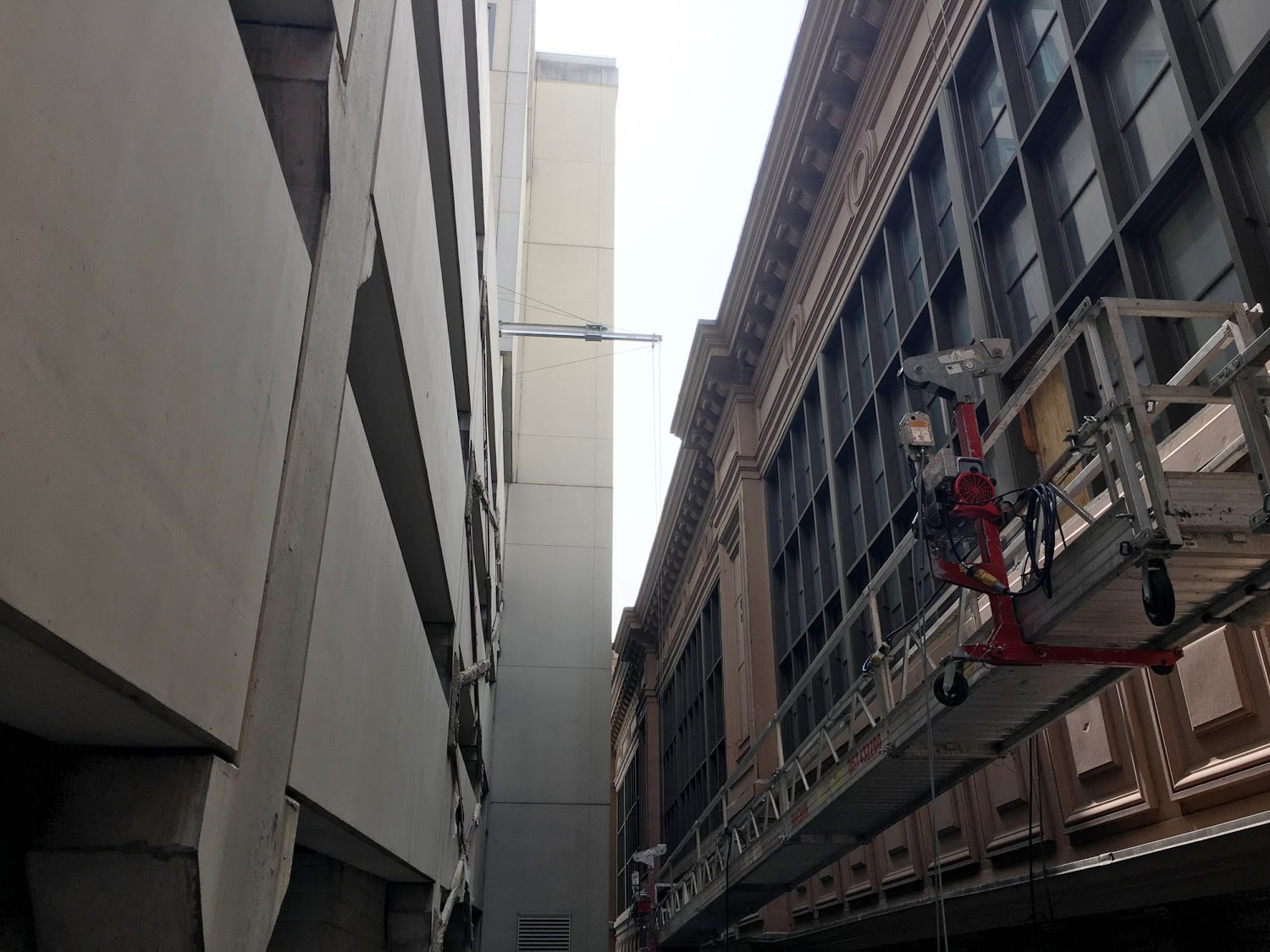 “What if we swung the job from the parking garage next door?” he said. 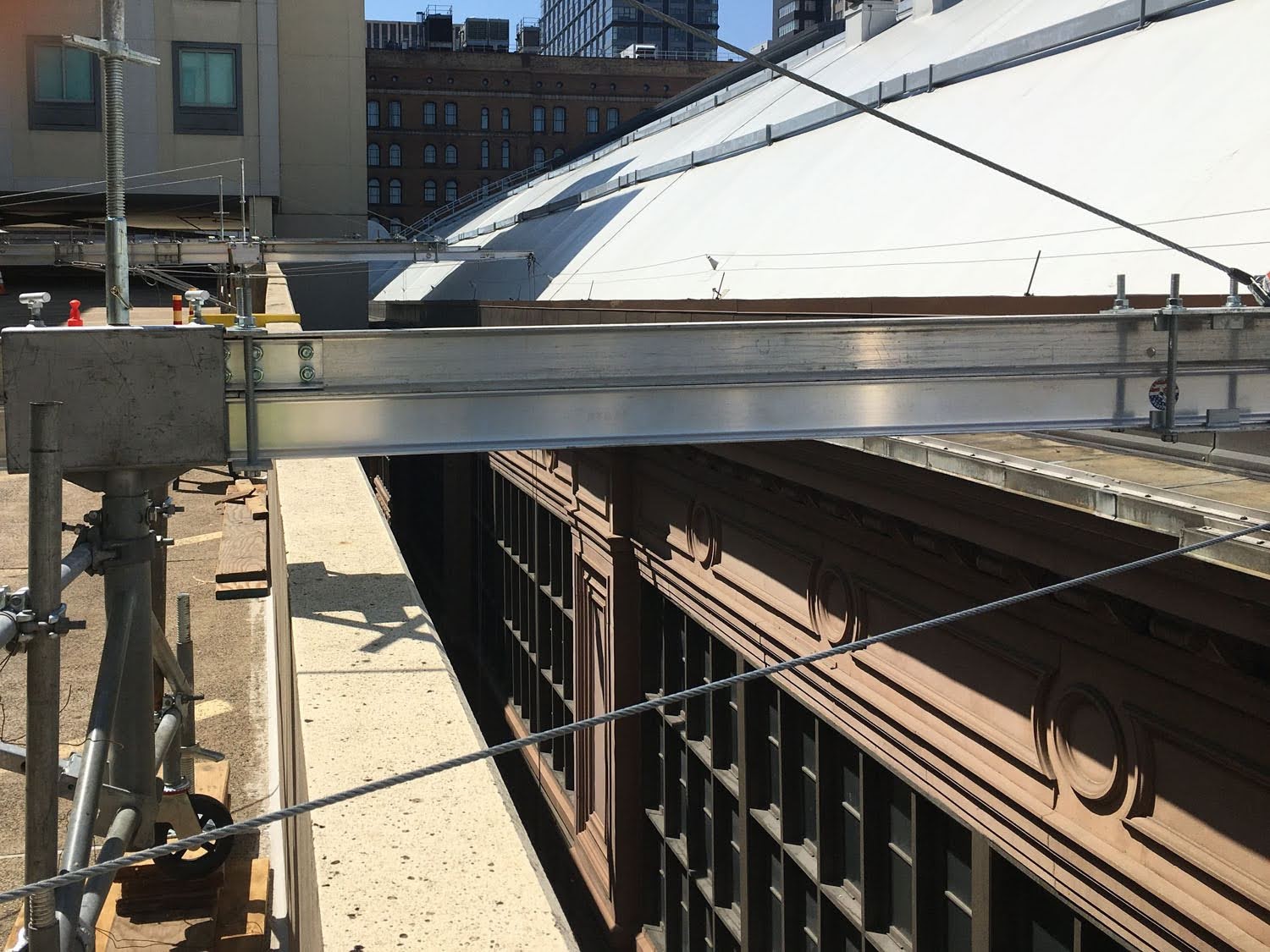 He recalled that Bee Access (swing manufacturer) had developed equipment that could extend the normal reach of a regular swing beam by combining multiple beams into one long unit.  But would this unit be long enough to extend out from the parking garage, span the gap between the buildings and put the suspended scaffold platforms close enough the Reading Terminal Market’s facade next door?  “Or would our Hero’s hopes and dreams be dashed to bits on the jagged rocks below???” 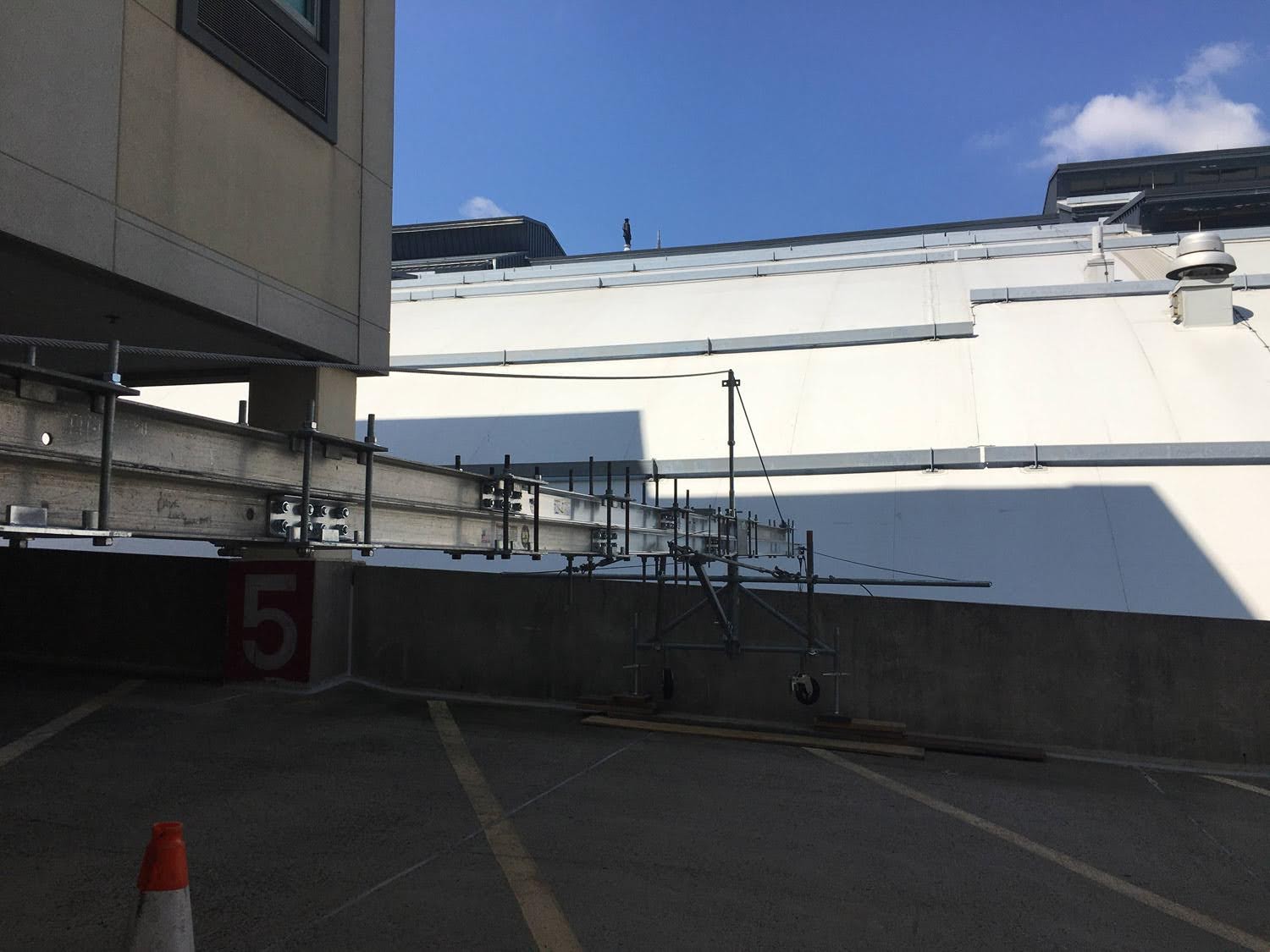 This was a tall order.  Could he pull it off?  Only one way to find out. 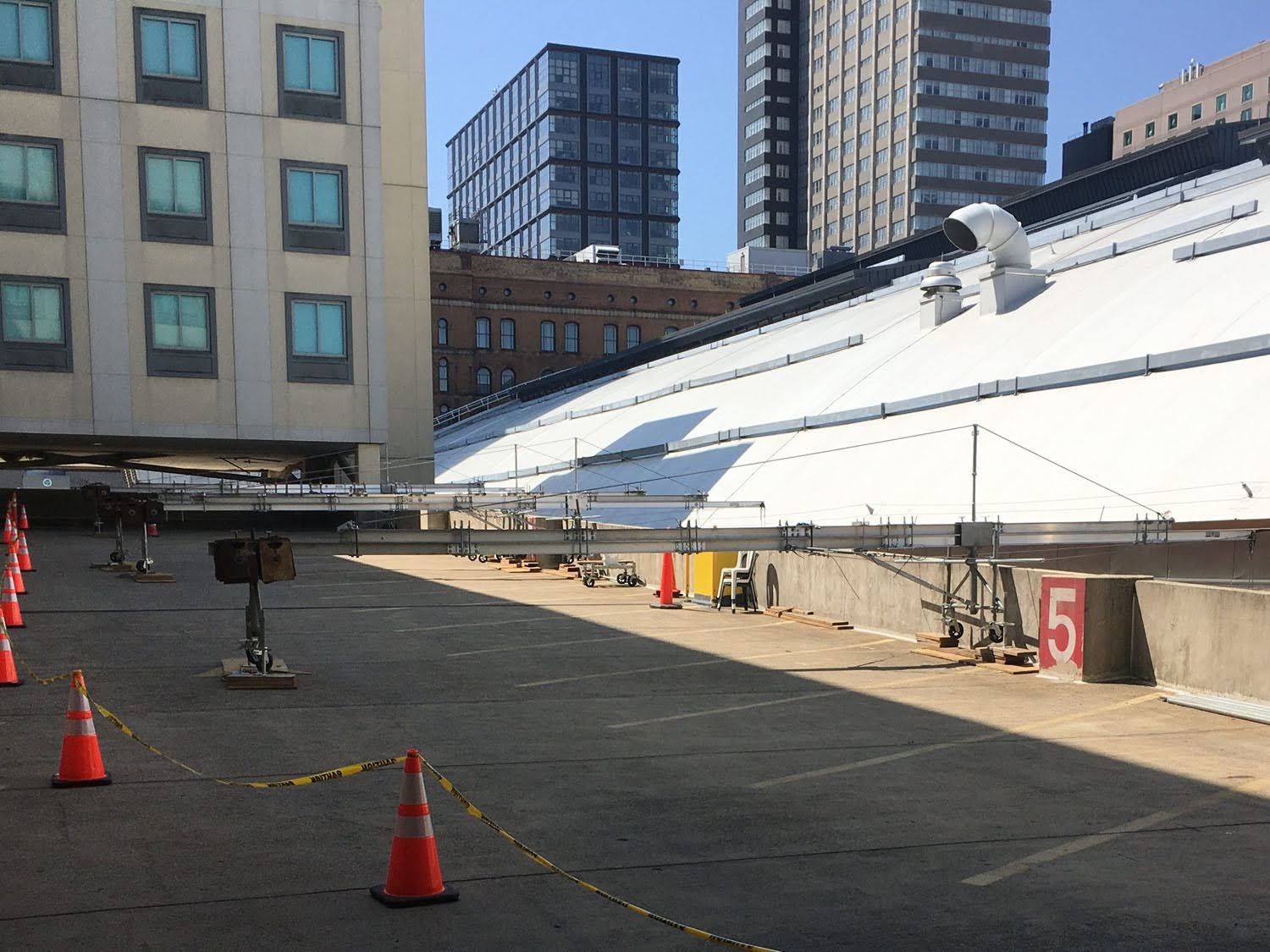 So Premier went about renting the empty parking spaces in the adjacent parking garage while Bob called Bee Access and ordered the special piece to make this extension work.  (Some of these photos were taken during the build process) 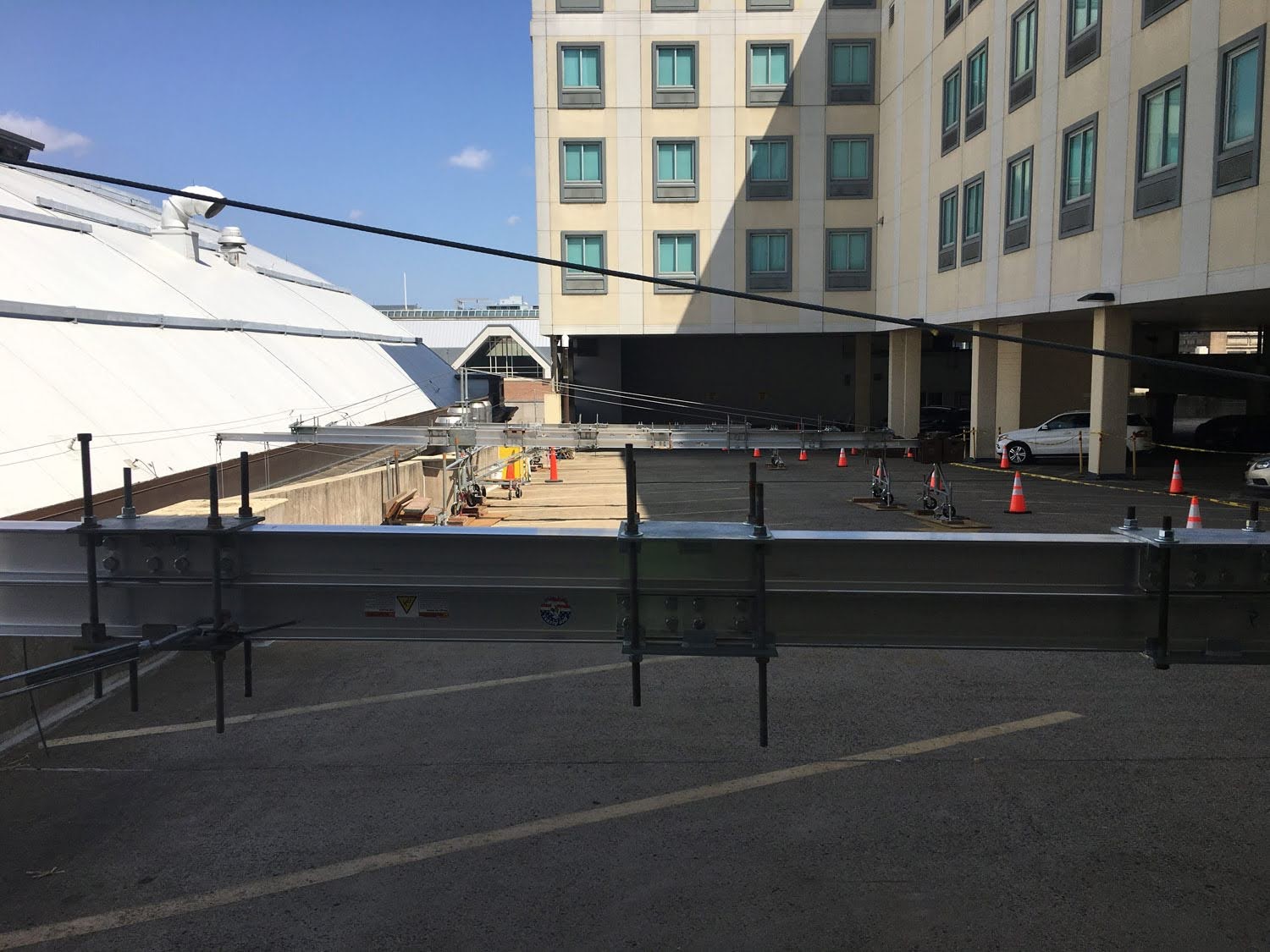 The result?  A suspended scaffold beam that’s almost 40 feet long and extends almost 14 feet out and over the gap in between the two buildings.  You can see the beam to beam clamps that attach two layers of beams, across the splices, to reinforce the strength.  And the special piece of equipment Bob ordered that is the key to the entire device.  They are diagonal cables that keep the keep the beam from moving left to right where it could buckle under the pressure, much like a bowsprit or yard arm on a sailing ship. 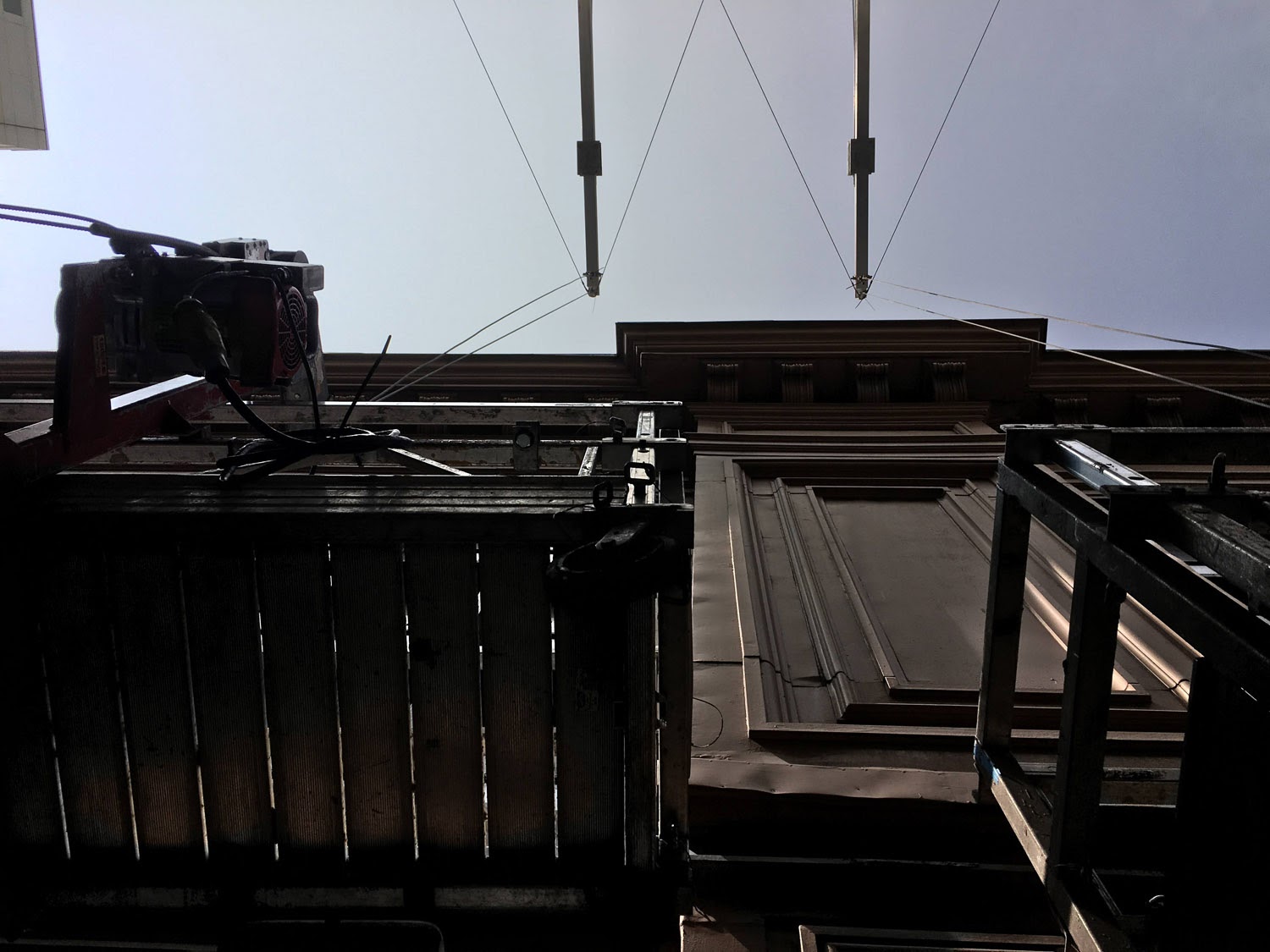 Counterweights were added to compensate for the extra leverage they put upon the beam and stands.  Tie backs were anchored directly into the concrete and tied off to the beam. 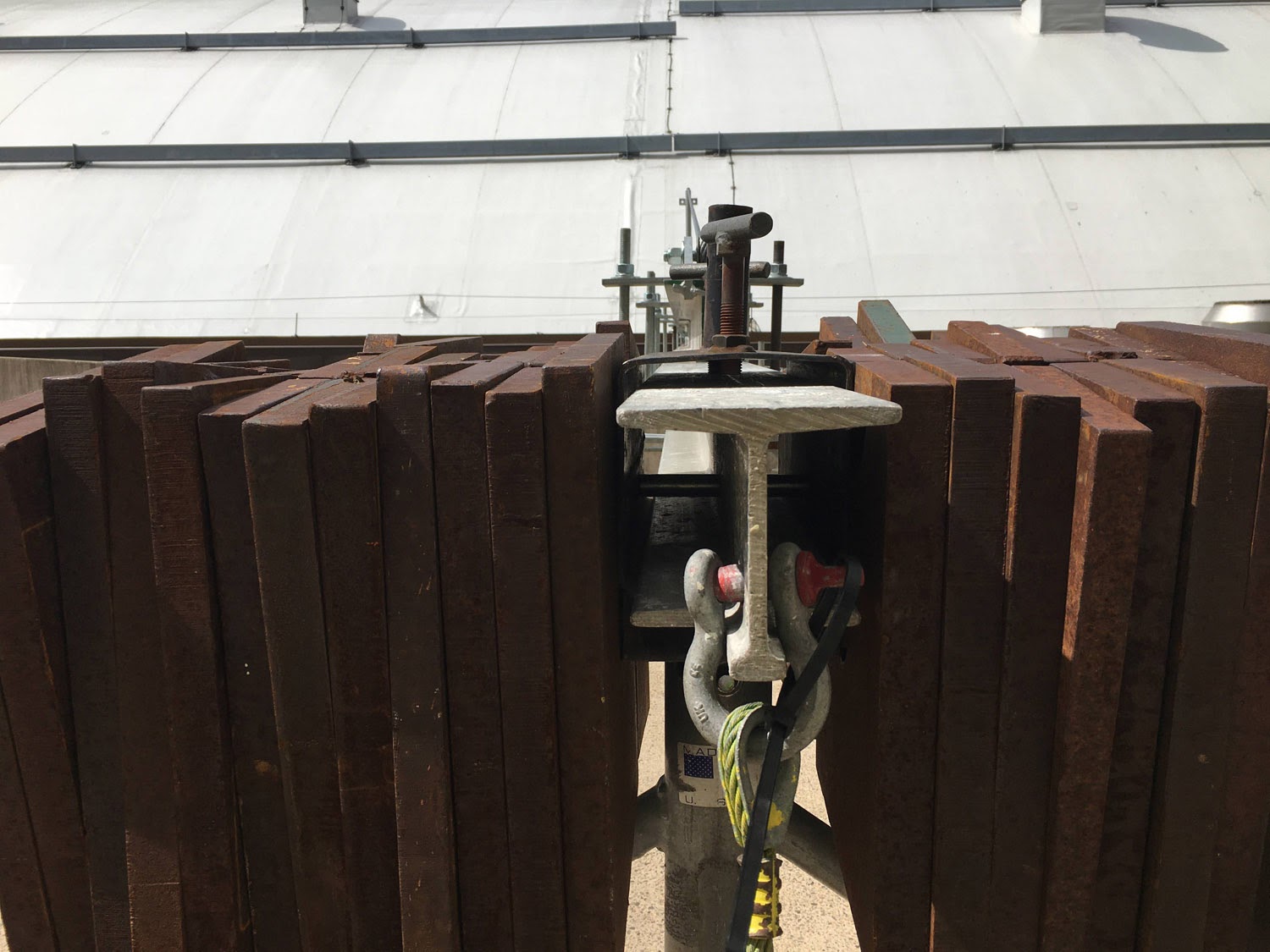 They erected two system scaffold towers in the alley where the crew could bring up the material and equipment necessary for the restoration. 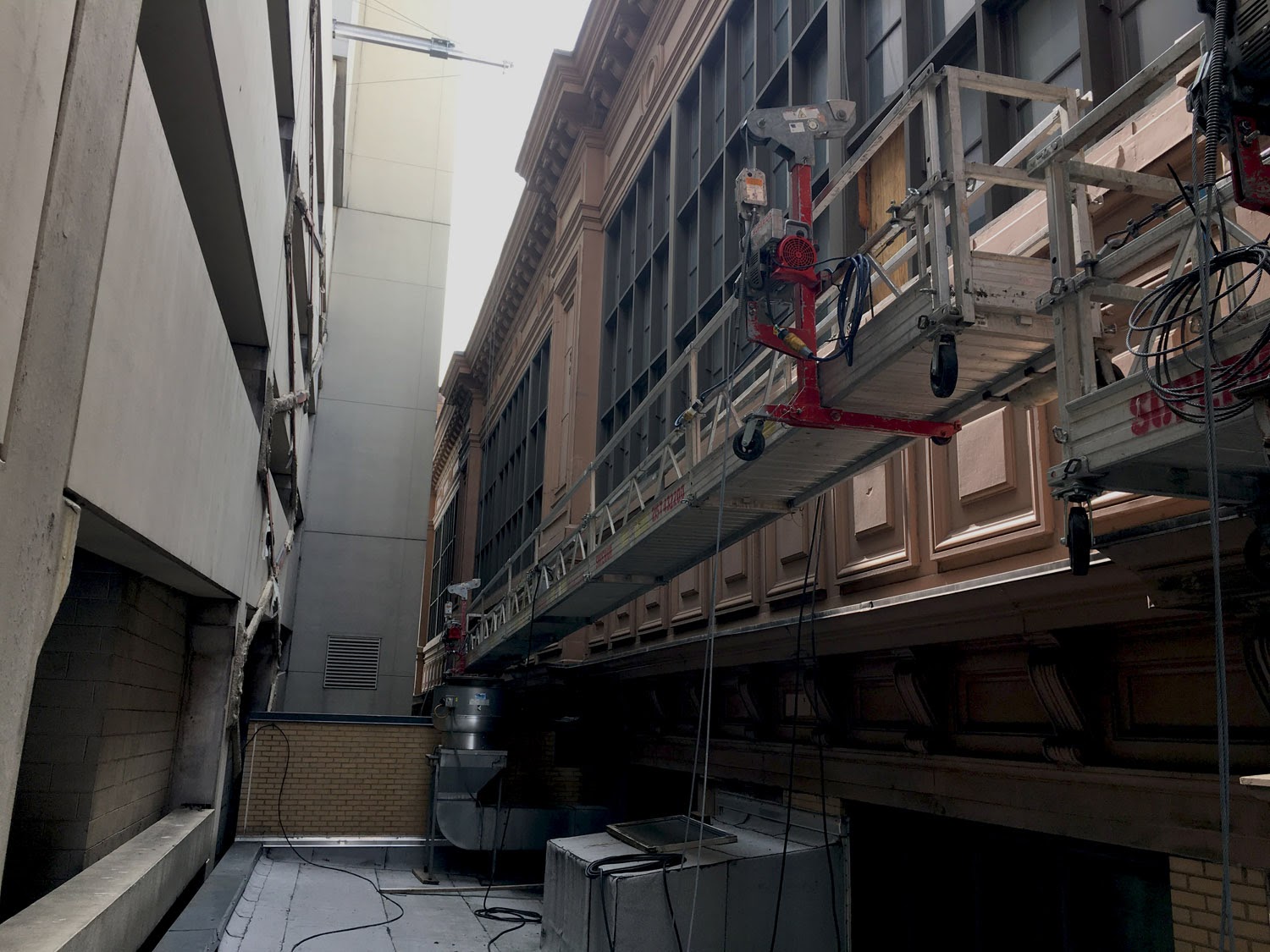 The suspended scaffold platforms hang perfectly in the area being restored and can go up and down at will providing safe access to any part of the facade.

Once again, the King of Swing, comes up with a most effective solution.  Thanks to Premier Building Restoration for allowing Superior Scaffold to think outside the box on this.  And we are always proud to be a part of the continual preservation of Philadelphia’s iconic structures. 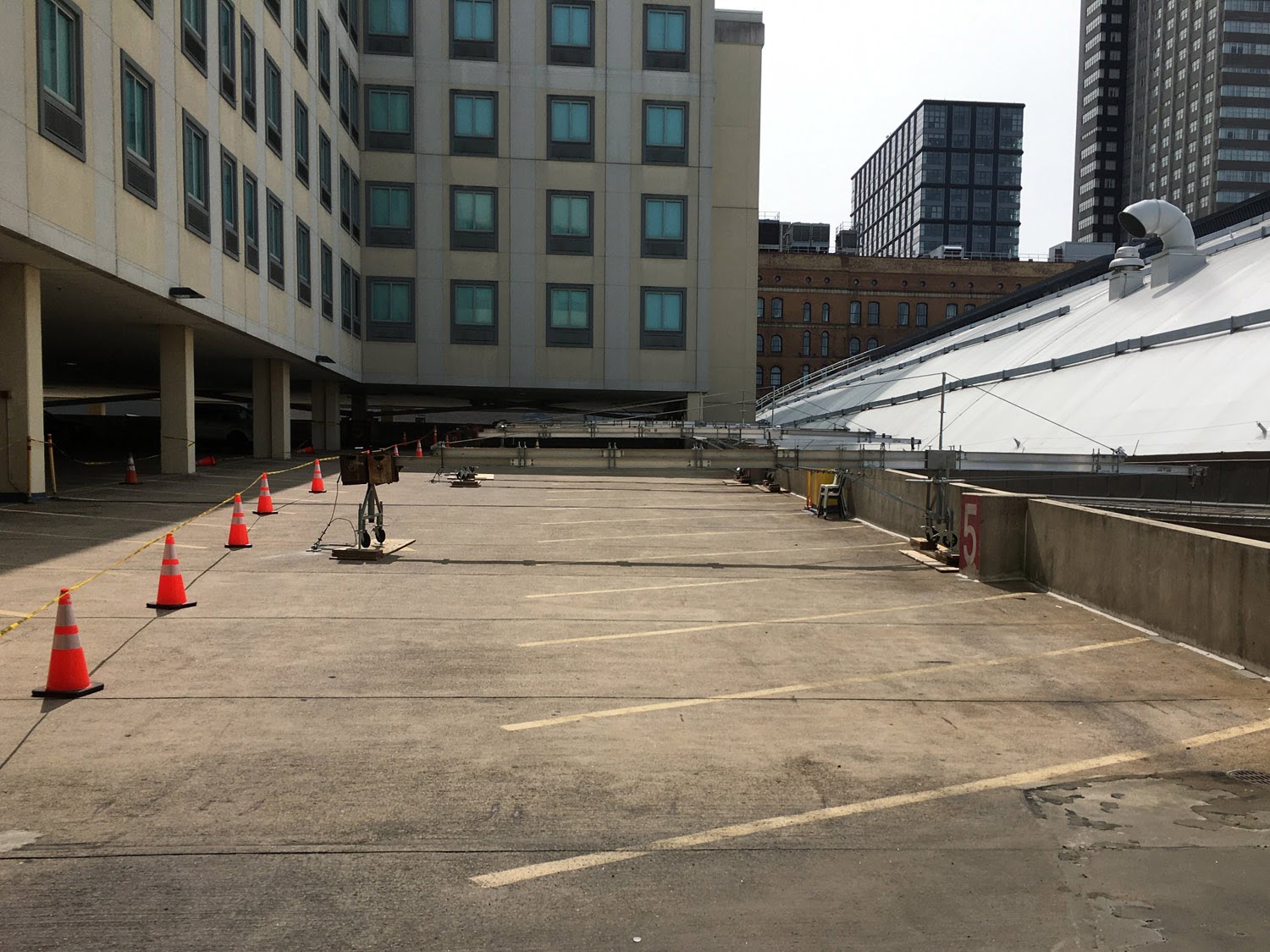 And since we lost one of the greats this week, I thought we’d better pay tribute.  What better song to represent Superior’s ability to get you to great heights. If you can dream it up, we’ll get you up there to access it. RIP Eddie.