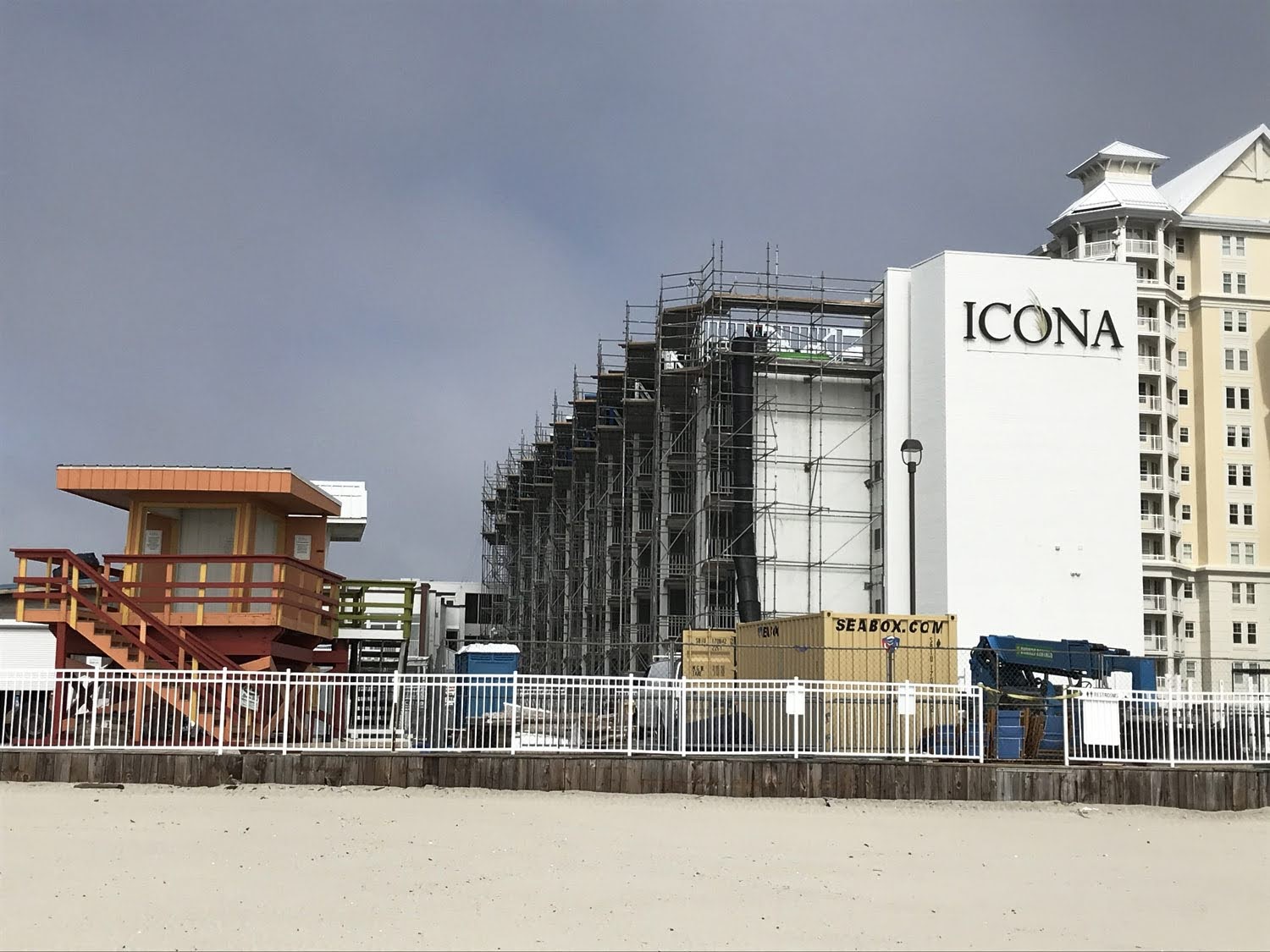 “Overlooking beautiful Diamond Beach on the quiet side of town, ICONA Diamond Beach Resort offers the perfect NJ vacation location: directly on one of the only private beaches in New Jersey. Also, one of only a few hotels in the Wildwood Crest area open year-round, this upscale Jersey Shore resort delights with sparkling clean, “feel-the-ocean-air” interiors by celebrity designer Blanche Garcia, spacious suites with galley kitchens, and beach attendants who set up chairs and umbrellas and serve fresh cocktails and delicious bites right on the beach.” 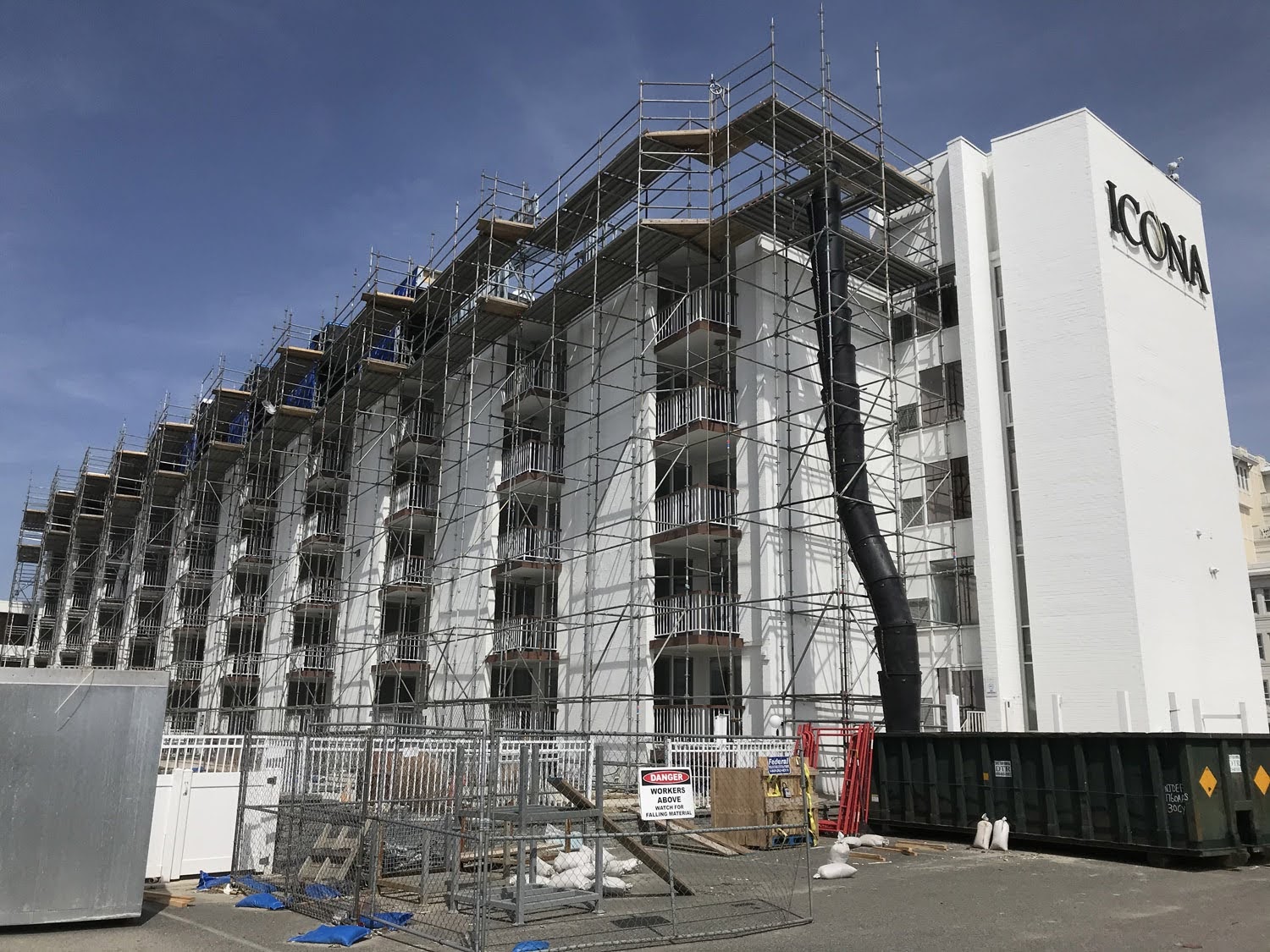 I don’t know who wrote that brilliant first paragraph from the ICONA website but they might have a second career writing romance or mystery novels.  I had been struggling for what to say about this job but after reading that paragraph, I thought, perfect.  This is my chance to win the Harlequin Prize for Scaffold Romance! 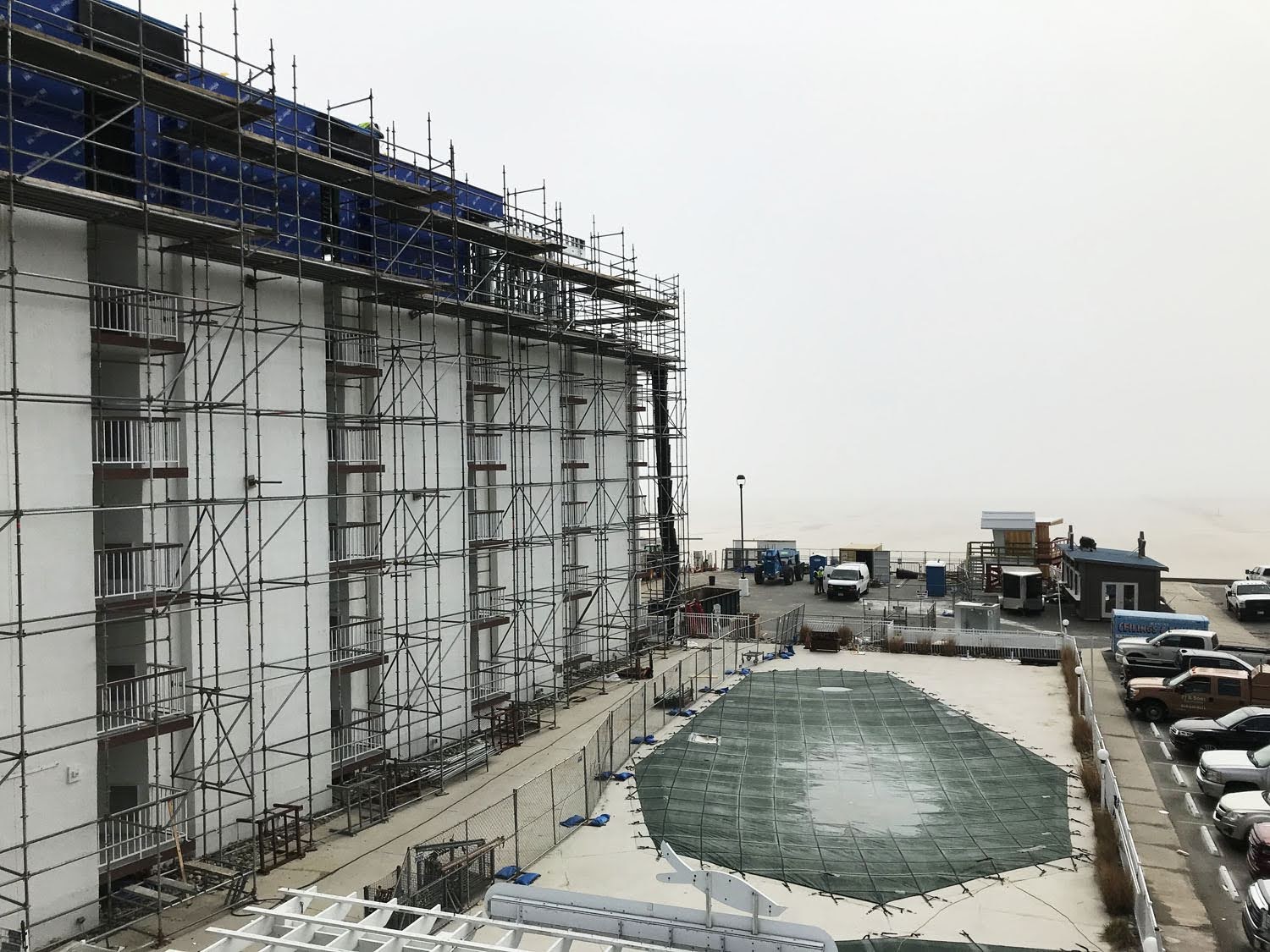 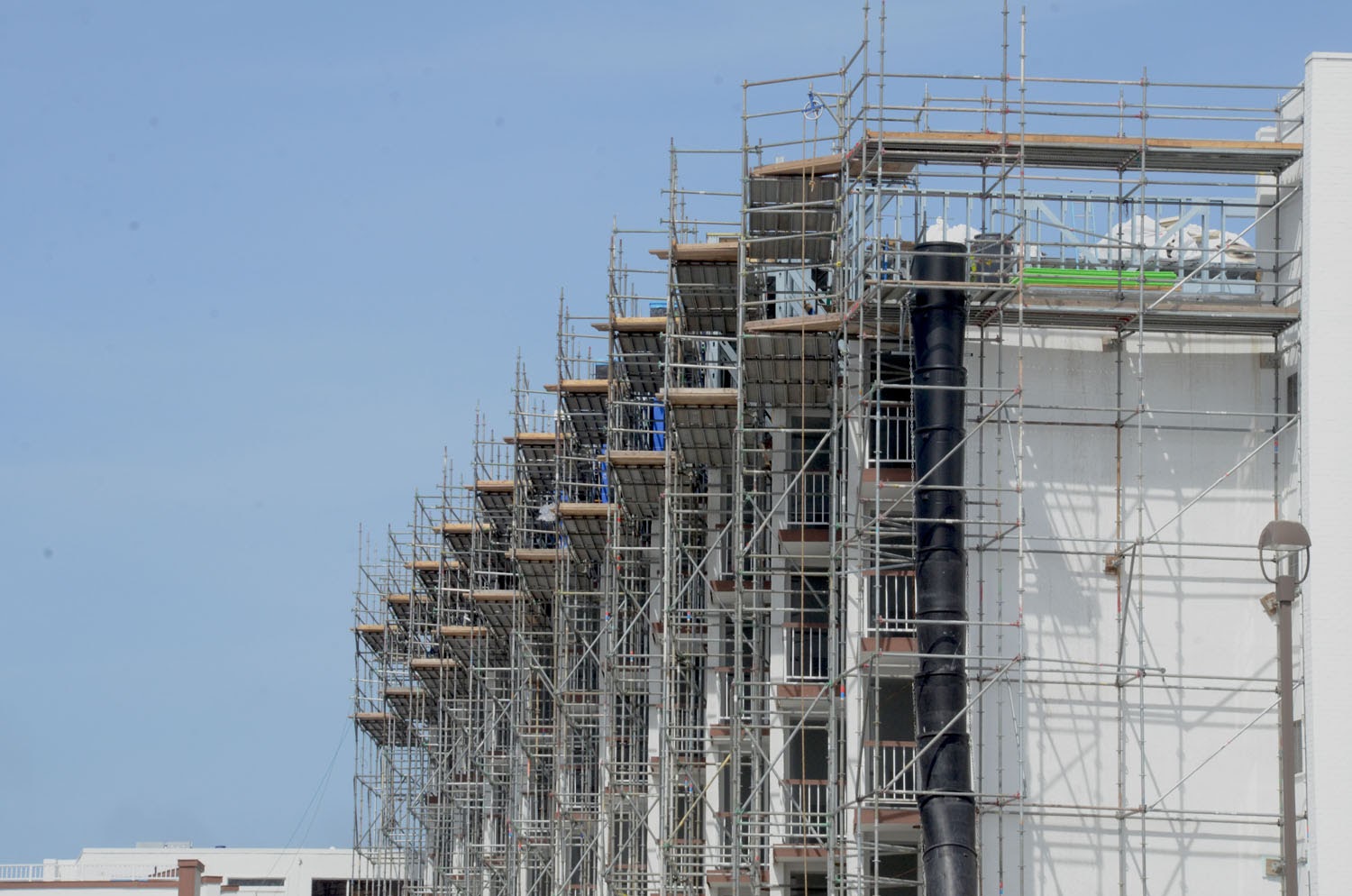 The wind blew the haze and light snow-like mist in from the sea that morning washing the ICONA in a diffused light that made it appear as if it was sitting on the edge of the world.  The molecules of the majestic Atlantic Ocean were traded for grains of sand in the desert.  The climate that day was as rowdy as a crew of sailors coming ashore after a long deployment.  It was, at the same time, freezing cold, blowing sand and snow, then sunny and cloudy. Preparing for work had to have been a chore. The metal framework clung to the side of the terraced hotel providing the support to breathe life into this structure rising from the beach. 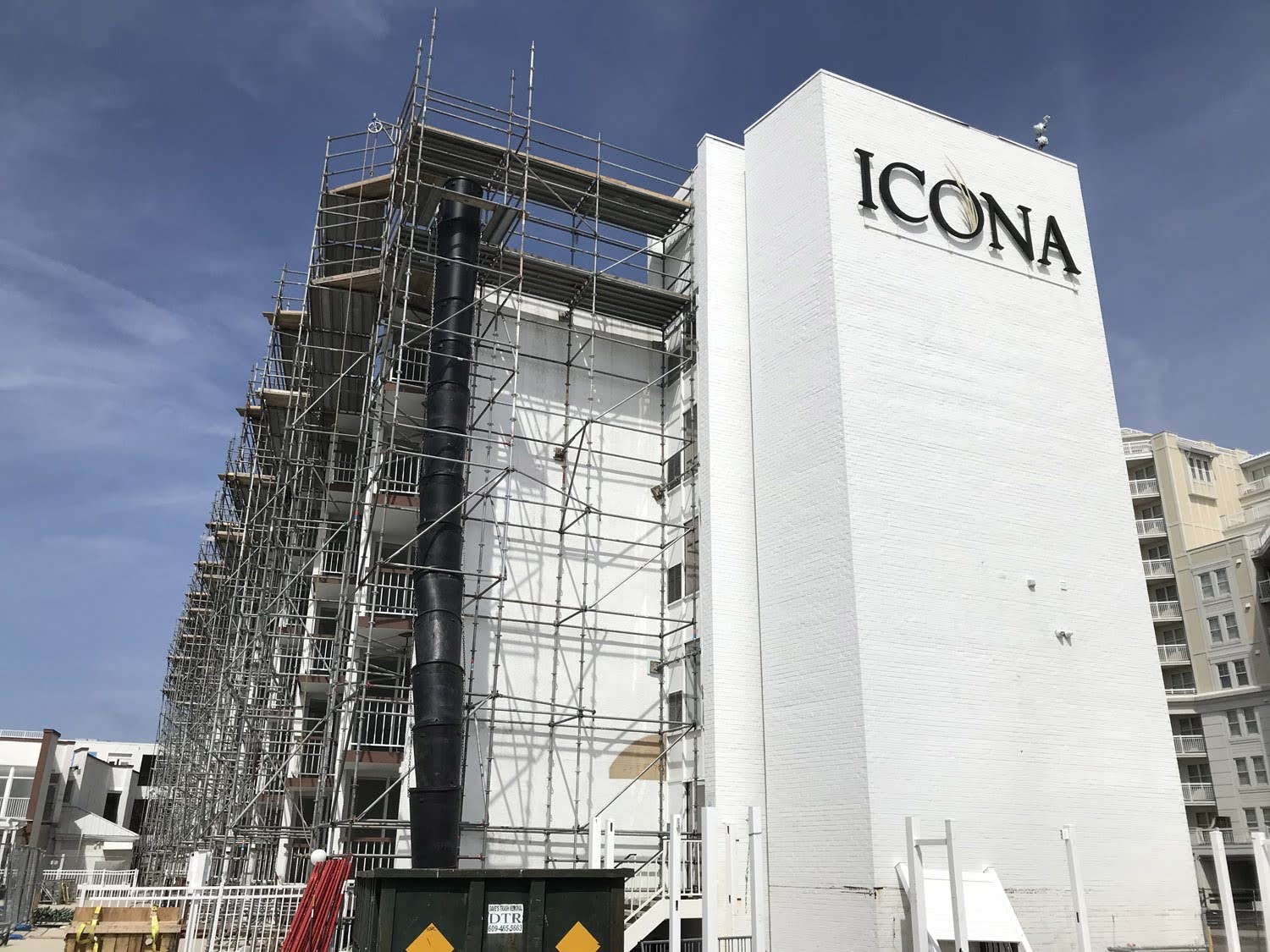 He was a navy sailor, separated for more than a year from the woman he loved.  They had a weekend encounter and their souls combined with an energy neither had ever experienced before. 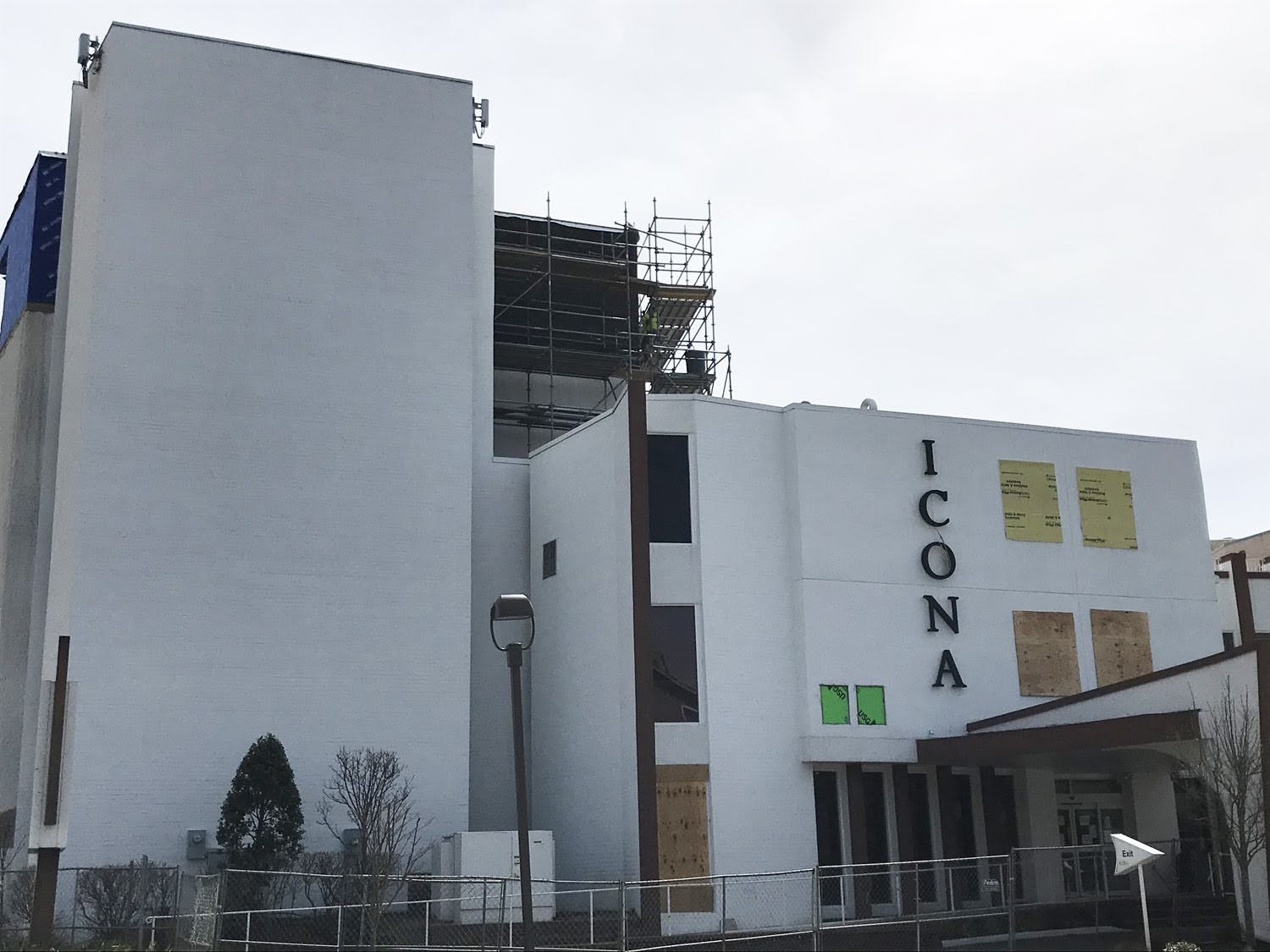 He was deposited at the foot of the newly remodeled ICONA Diamond Beach Resort in Wildwood.  It had been months without any communication.  In all truth, they barely knew each other but managed to keep their cosmic unity smoldering with sparse but electric communications.  Would they still have the same spark and burning desire to be together?  She had made the first move – he made the last. 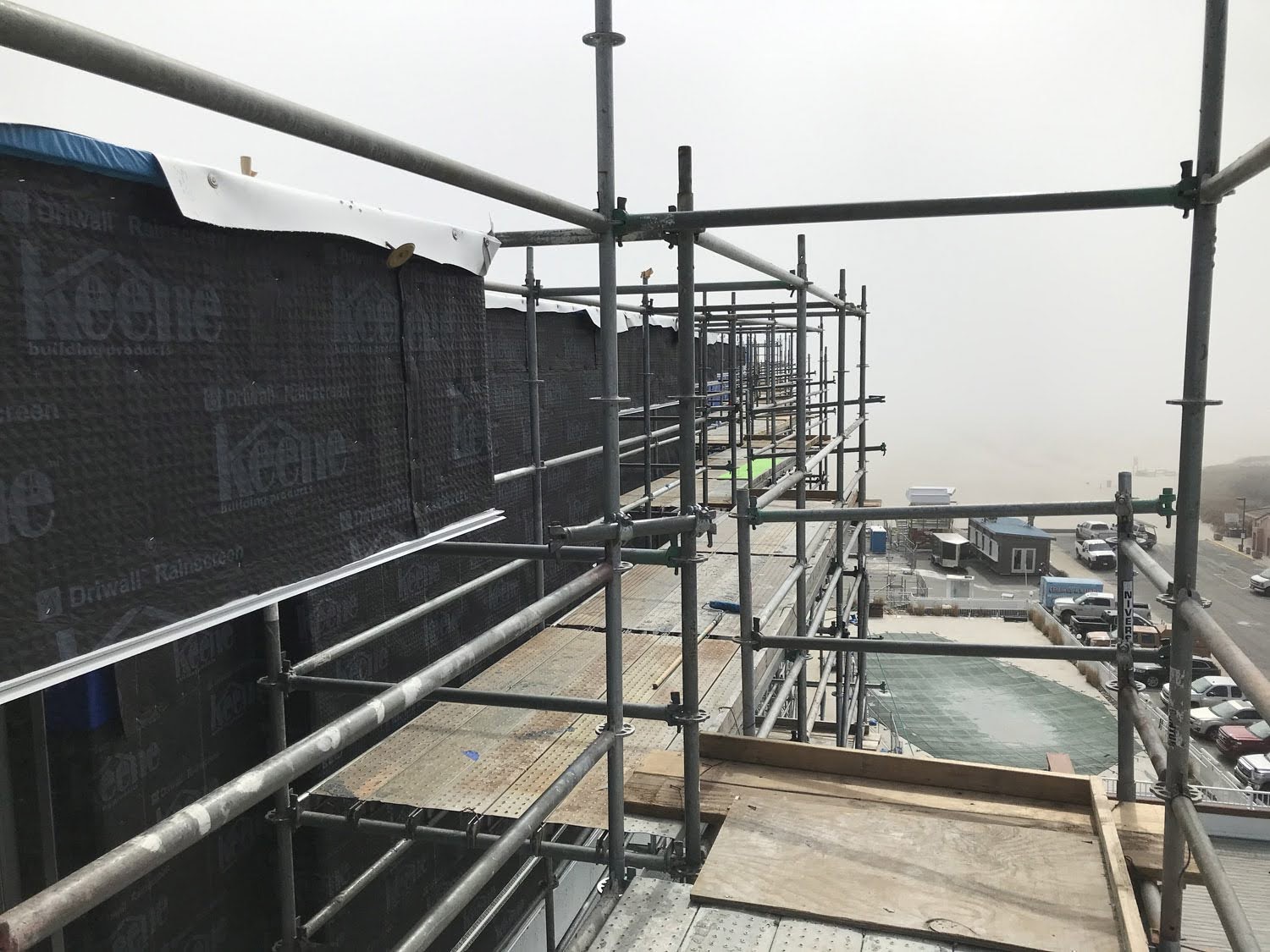 She was a dark eyed, soulful, creature that captivated him the second they made eye contact.  She had olive skin and black hair that ran straight and thin like her body.  She was elusive and yet familiar.  He fell hard and fast trusting that eventually he would know every detail.  Was she even real?  Did she fall as hard as he had?  He had nothing to lose but the place he’d given her in his heart.  So he said yes to meeting her again. 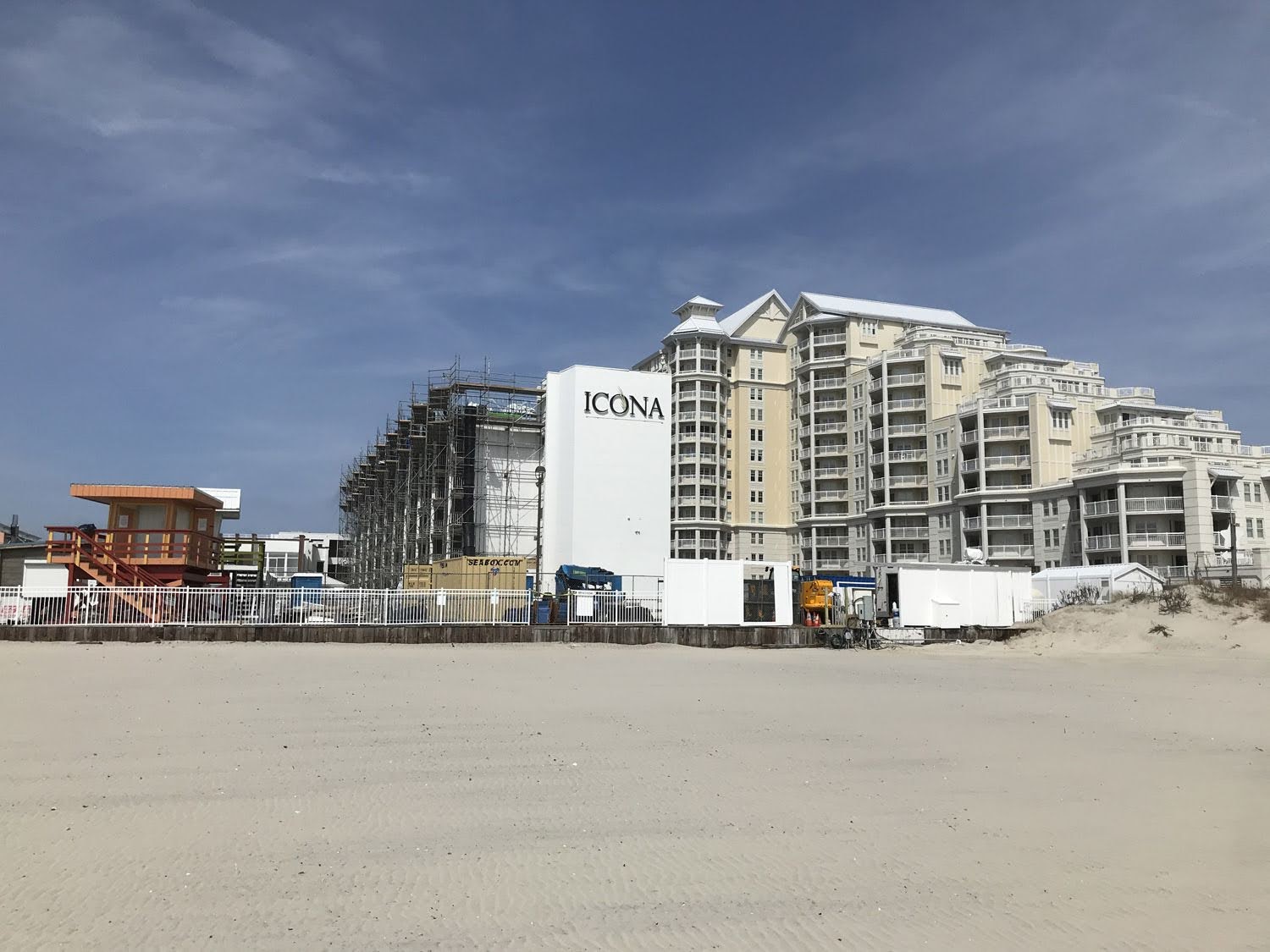 She picked the location.  Said the design and remodel was exquisite. Said she knew a little something about rebuilding.  He assumed she was referring to her ex.  Was it a set up or would she actually show?  These were the thoughts in his head as he pushed through the driving wind, sand and snow towards the main entrance. 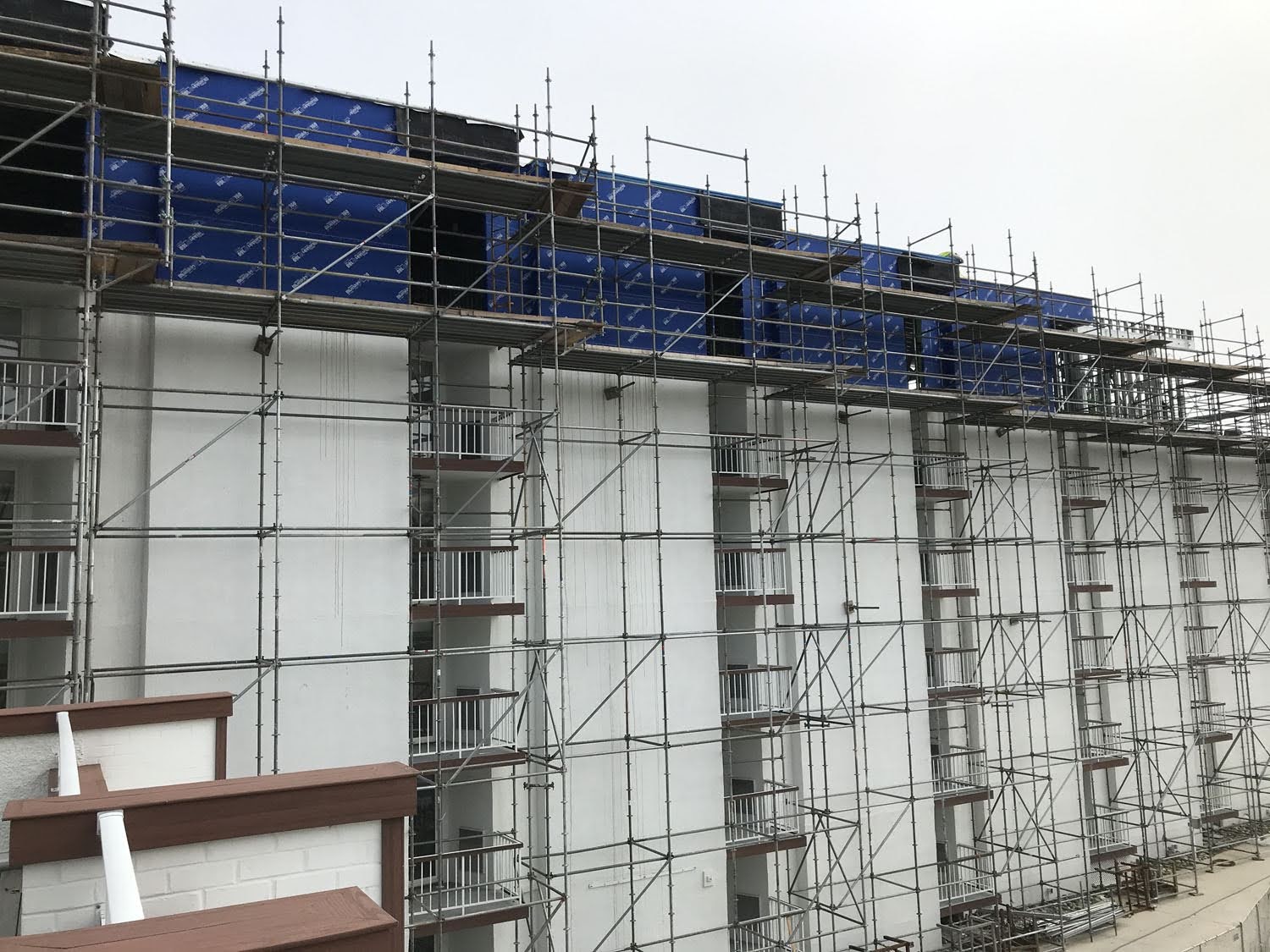 He couldn’t help but notice the giant web of aluminum and steel strapped to the side of the terraced (or saw-toothed building). There were men in bright winter gear everywhere.  He just left the navy but this made him feel oddly at home.  The sign out front said this was all part of a multimillion dollar renovation. They were adding an entire new floor to the top of the hotel.  Was that possible?  Was she a part of this renovation?  His mind spun in a hundred directions. 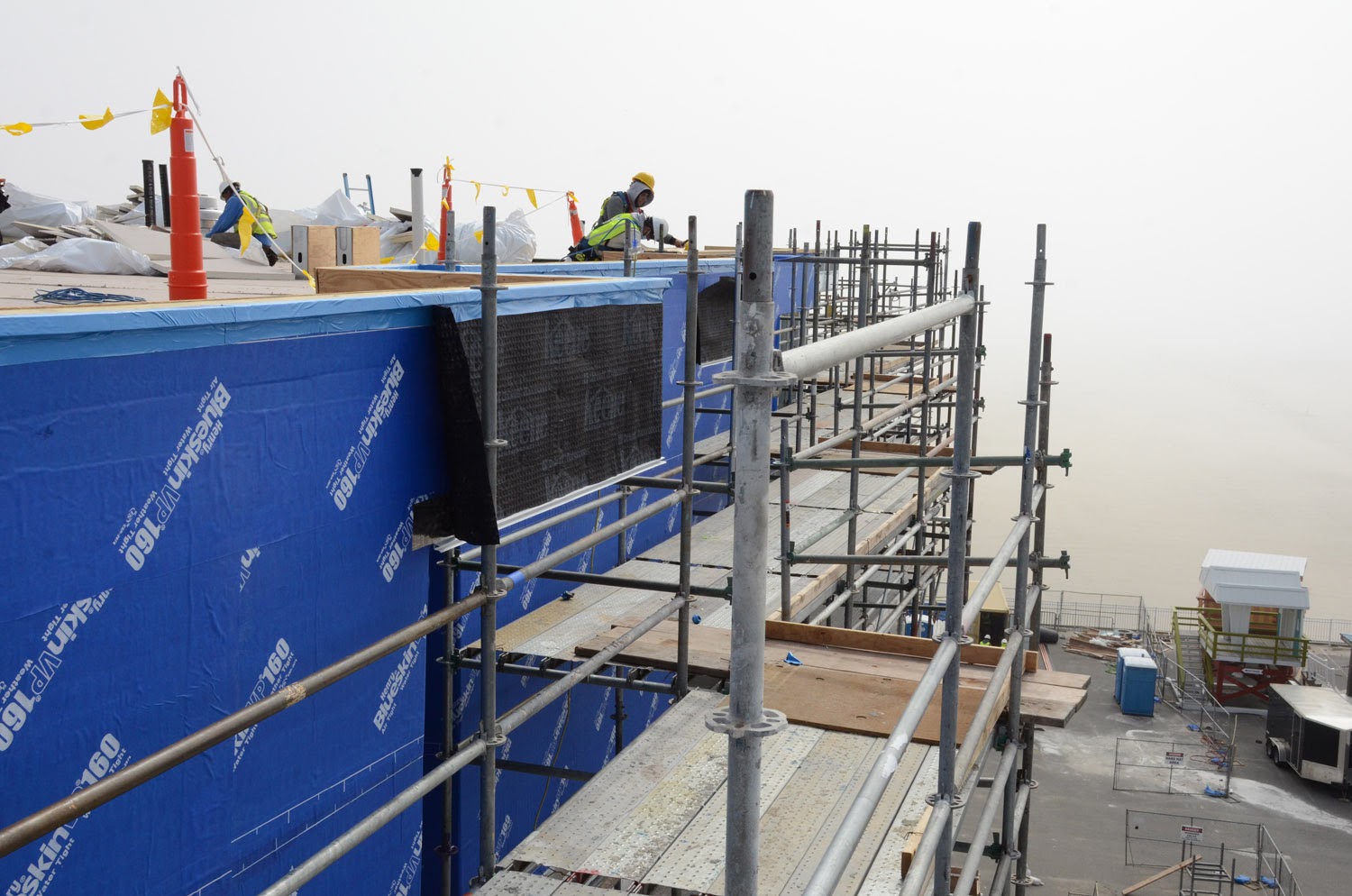 He could see that scaffold was a six-story, system scaffold with work decks on the top two levels to give construction crews complete access to the entire 6th floor addition.  The sign said the new addition would add 20 new, gorgeous penthouse suites.  Why would she call him to a hotel that wasn’t completed yet?  The mystery deepened. 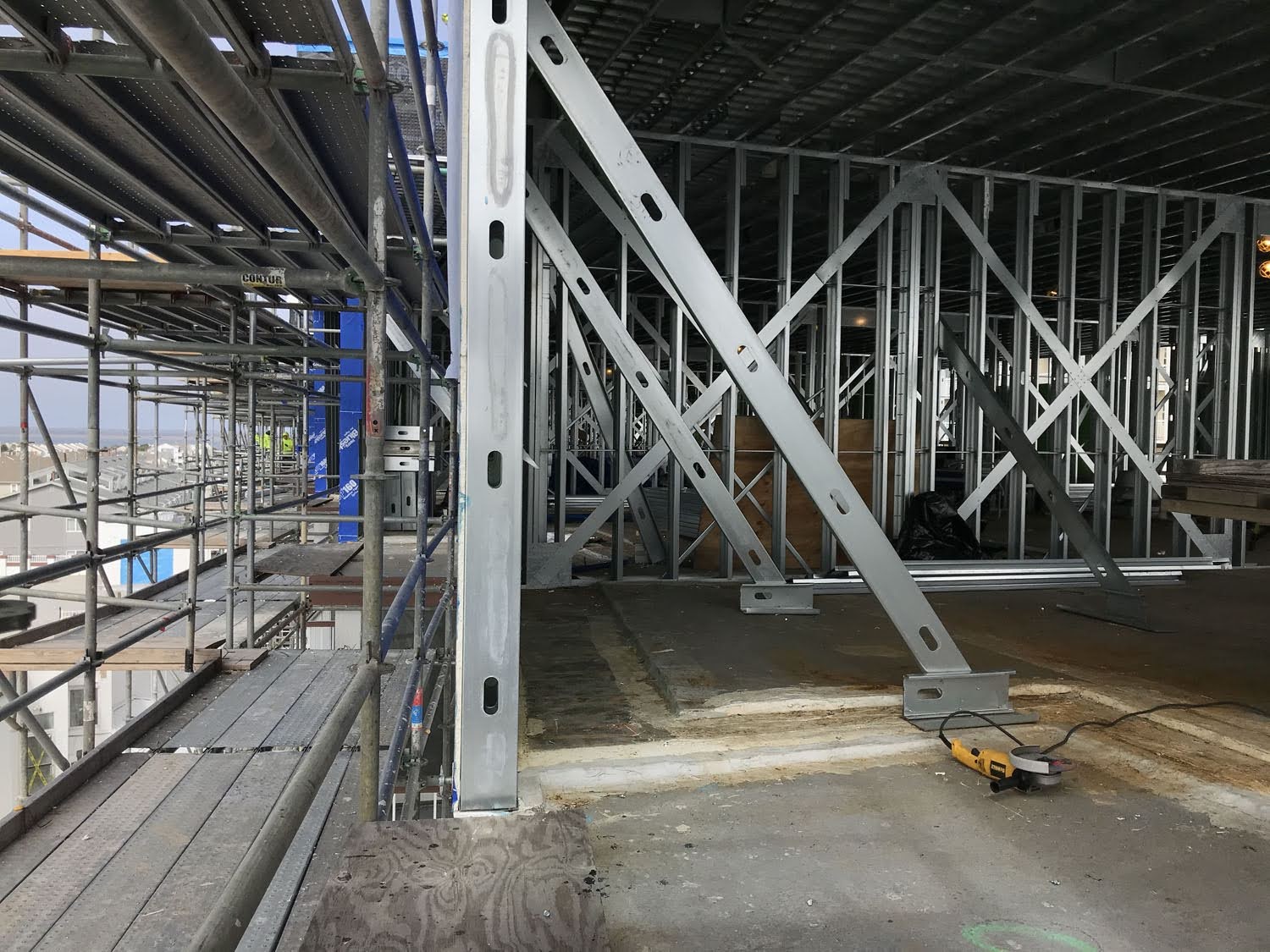 He made his way around the grounds carefully examining the area before walking inside.  As he quietly glided down the sidewalk in between the restaurant and hotel, it appeared that the system scaffold was the only solution to getting crews up to the top.  It was just too narrow for any other equipment.  He imagined the difficulty the workers must have had hauling all of that steel and having to erect it in a terraced manner. 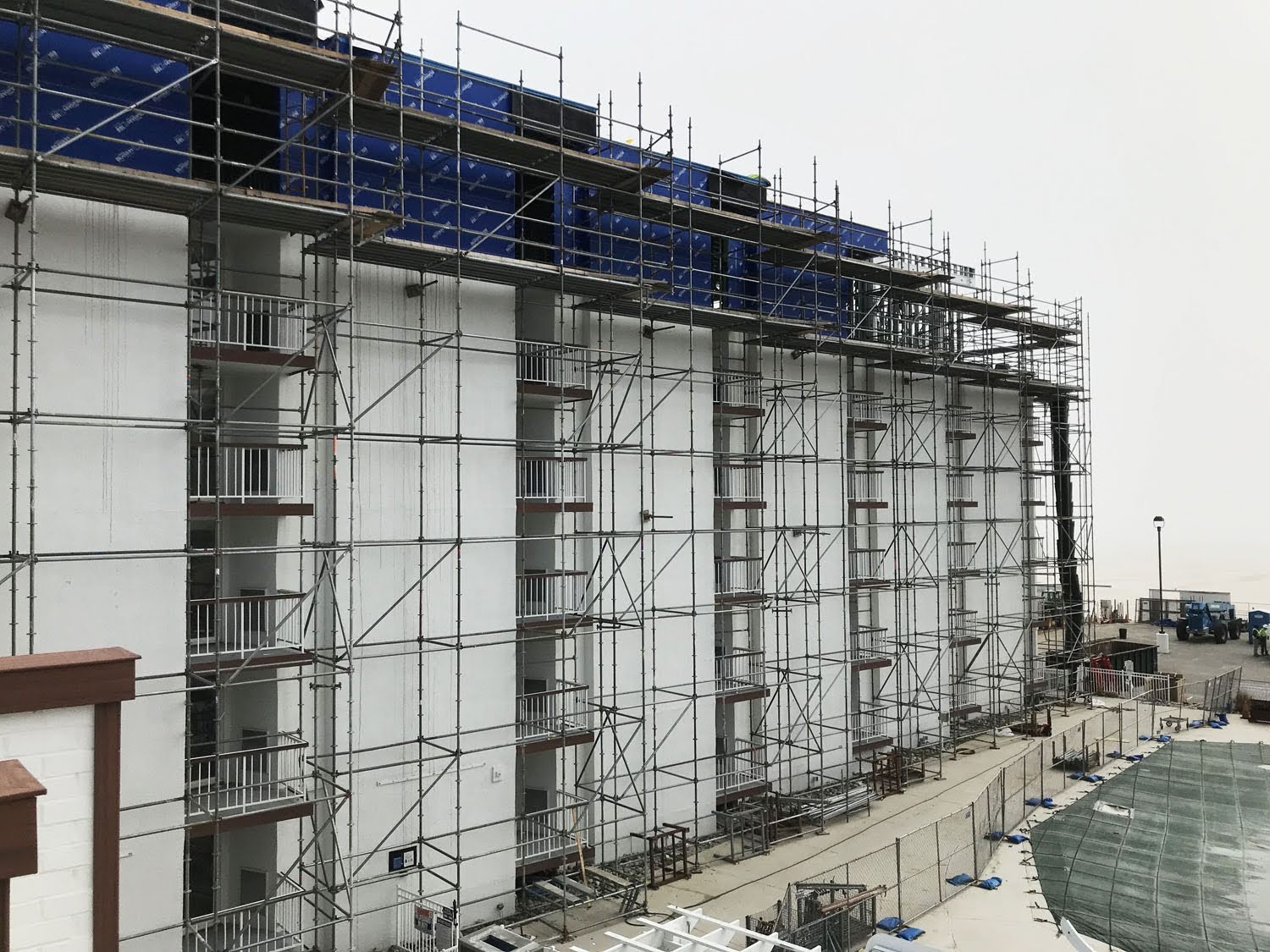 The layout of the building was smart, he thought.  Because of its saw-toothed design each balcony had a view of the ocean… of course, not today.  The gods decided to disguise the ocean, trick him into thinking it was the Sahara.  He wasn’t quite sure why? 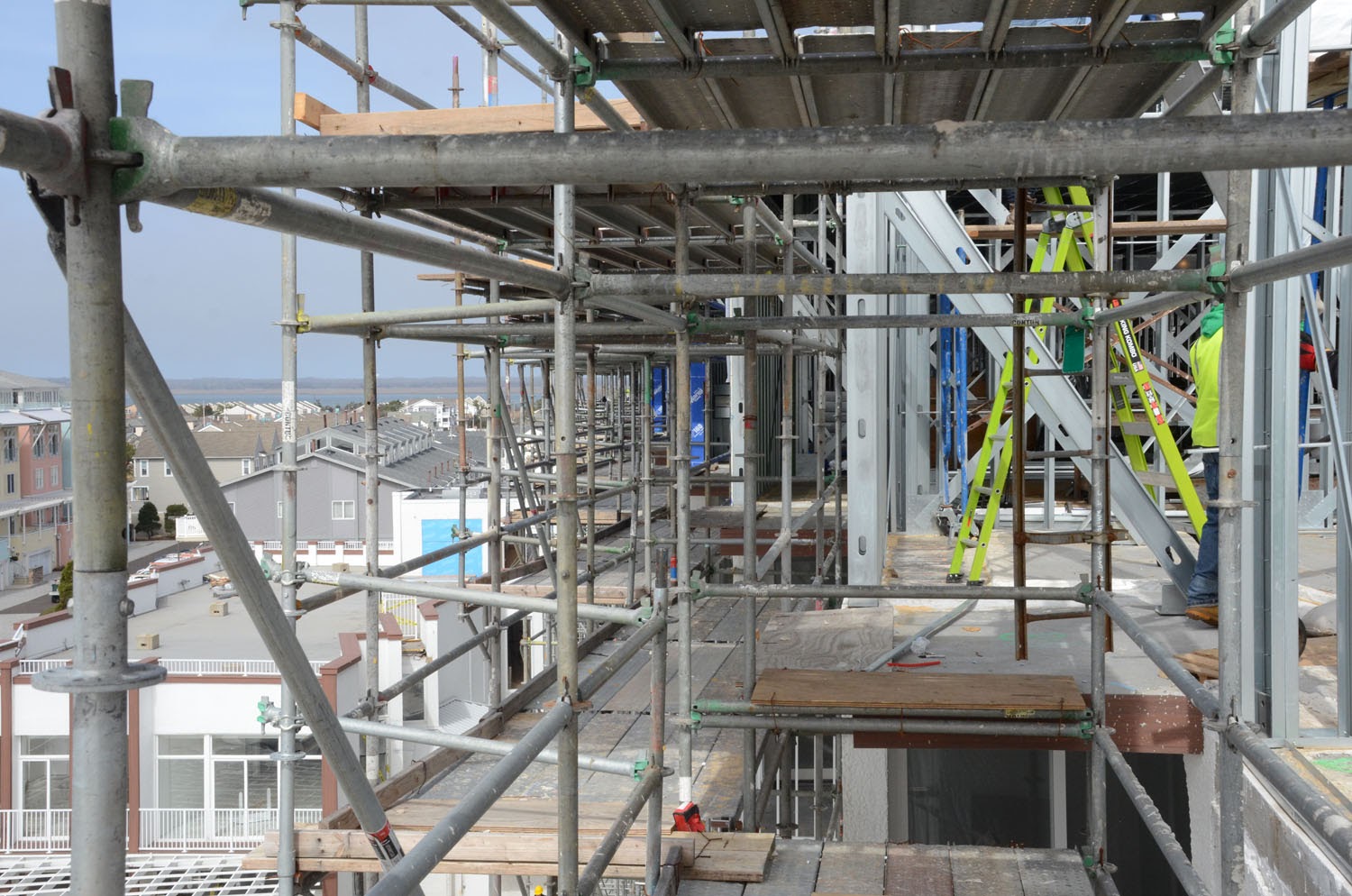 Was she inside one of the newly renovated rooms?  His curiosity piqued as he ascended staircase at the back of the hotel.  Passing workers, carpenters and electricians fresh paint, carpet and sawdust permeated the moist beach air.  Once at the top he could see the construction taking place.  They were using the scaffold to extend their working area to add the new rooms.  People buzzed around obliviously focused on their tasks at hand.  This was all new to him.  He was a fresh-faced college poly-sci dropout who joined the Navy when his money for school ran out.  Four years on a destroyer in deplorable places made him yearn for home.  This encounter would be his re-entry into society.  What would the future hold for them?  Was there a future for them?  He could only hope. 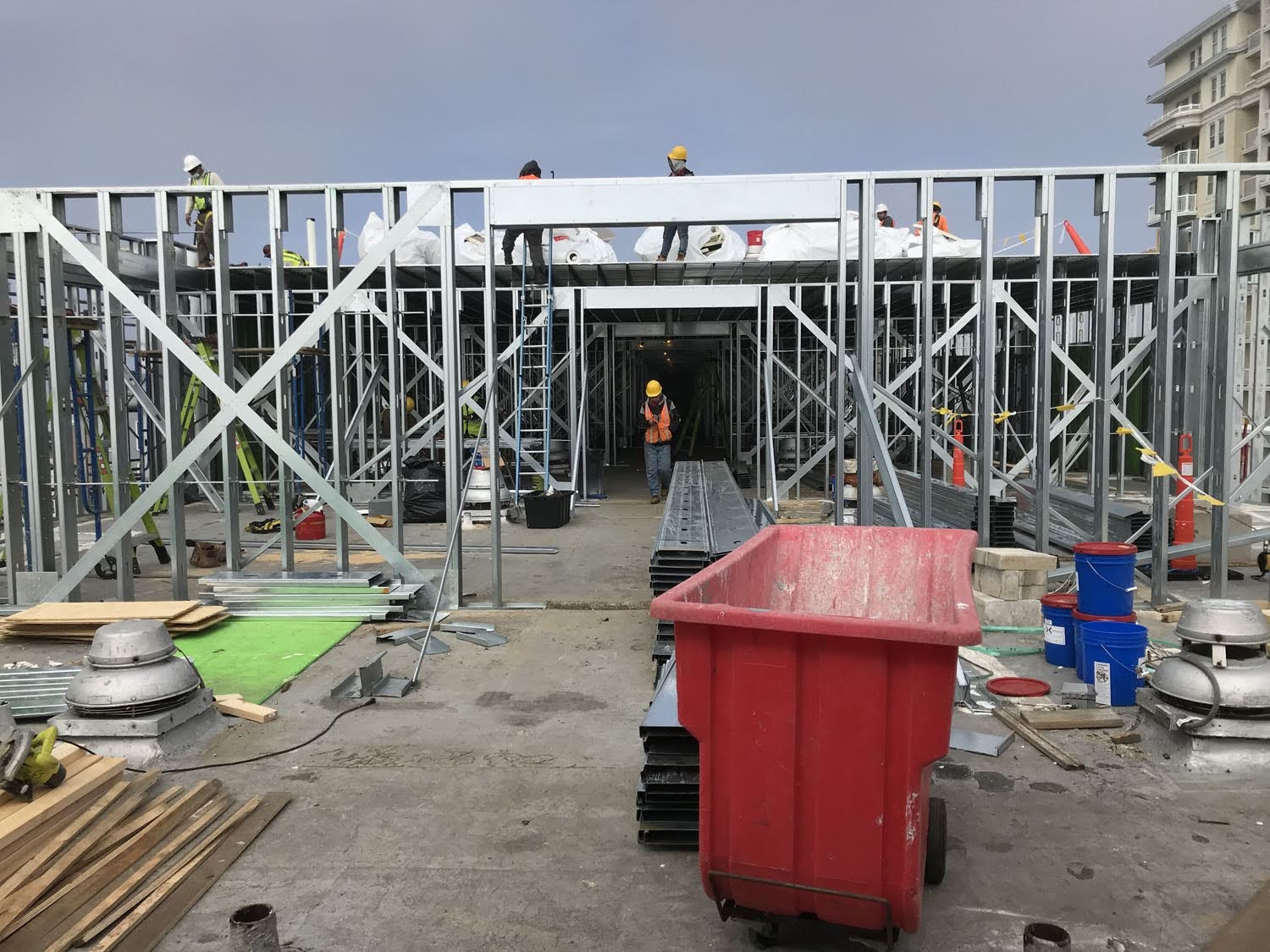 After walking most of the perimeter and checking out the intricate design, he made his way back downstairs to try to find her.  Would she be like he’d remembered?  Would his blood pressure rise and his heart skip a beat when he saw her?  Would she feel the same?  Could she have given her heart to him in the same way?  The whirling dervish of questions, feelings and thoughts made it hard for him to focus but he pushed on. 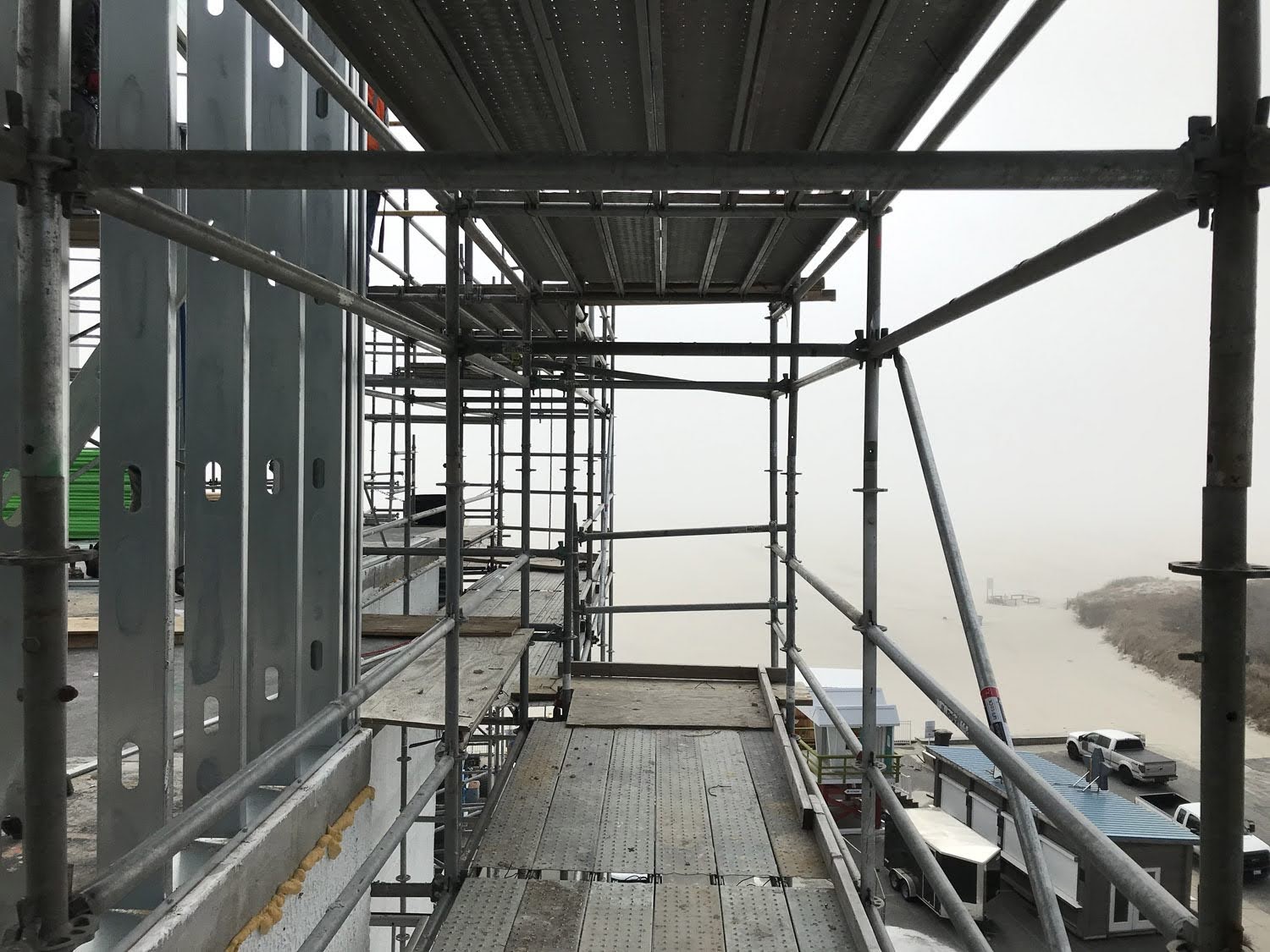 As he rounded the last group of stairs into the hallway – there she was, directing a group of installers.  She looked even prettier than he’d remembered.  Her long dark hair was pulled back into a ponytail and hidden beneath a crisp, white, construction helmet with a Superior Logo on front.  The safety glasses seemed to magnify her molasses eyes.  They lit up when she looked up from her clipboard and saw him.  He didn’t remember her smile being quite so luminescent but it beamed like a lighthouse on the point.  BAM.  The feeling was there!  It was real.  She was there.  She was real.  His heart literally leaped from his chest.  At that instant, he knew they would be okay. 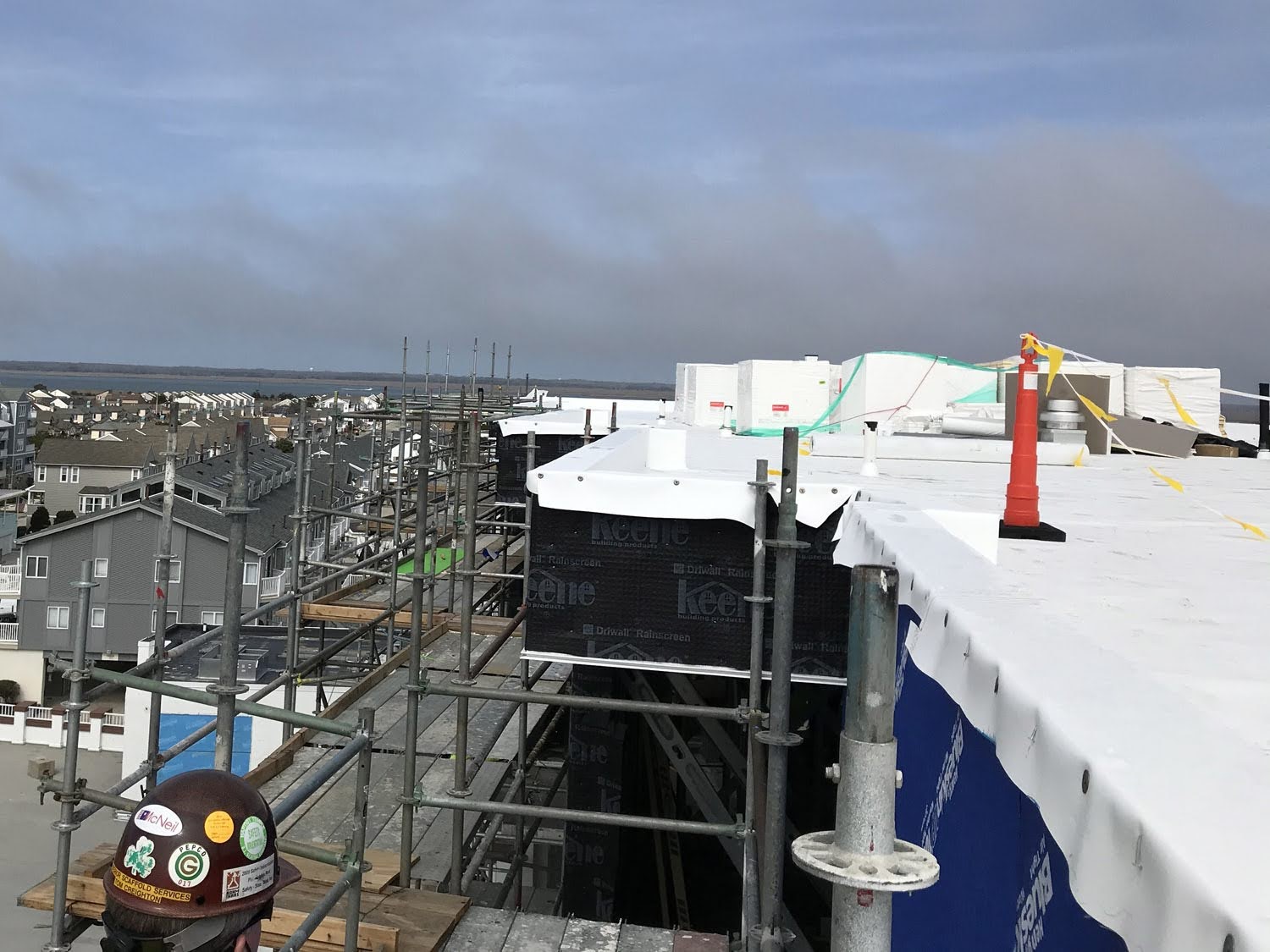 We’ll see you at the grand opening.  😉 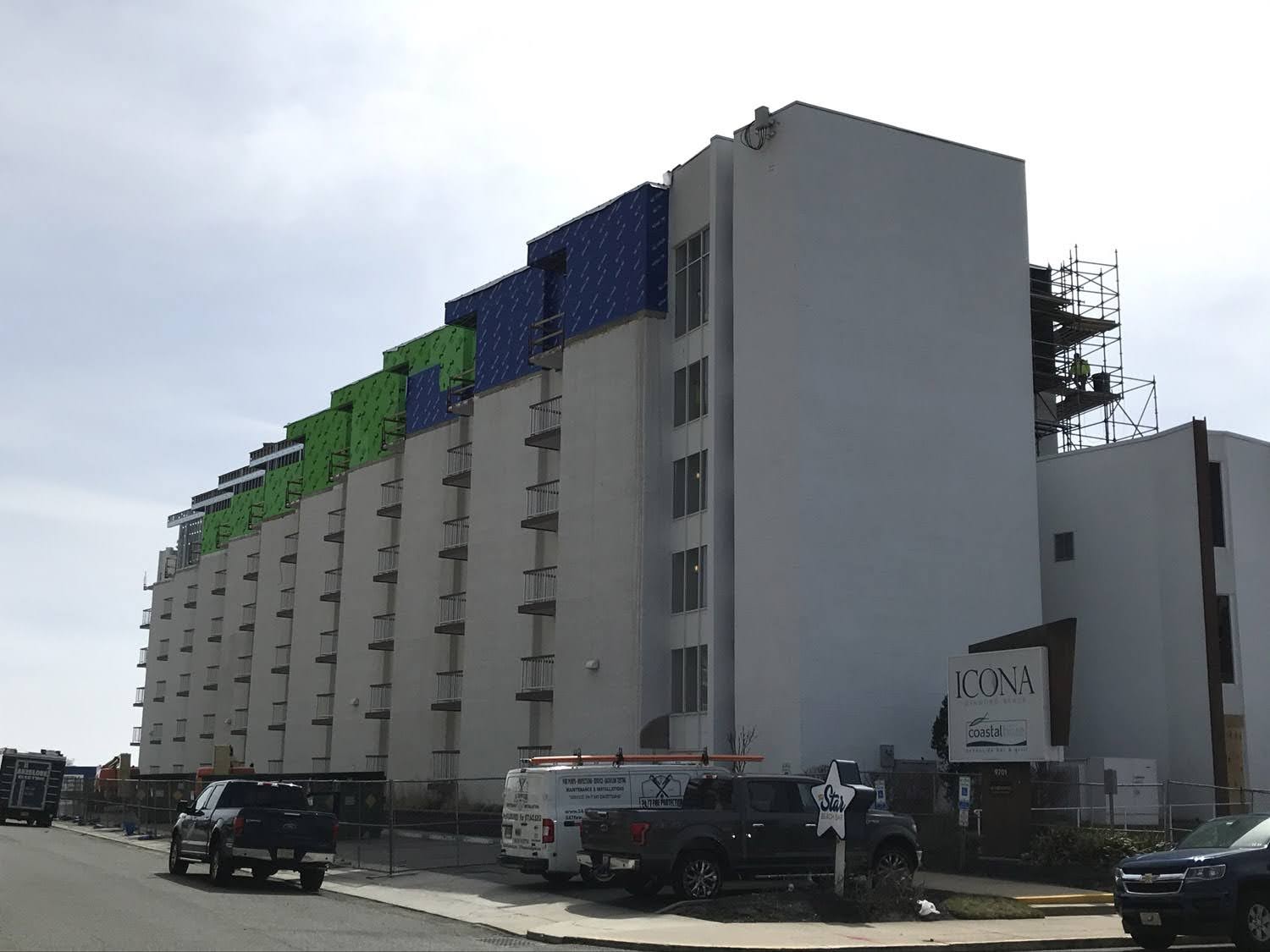 A big shout out to ICONA and Caritas Construction for letting Superior be a part of this project.  It’s going to be a beautiful place once it’s completed. 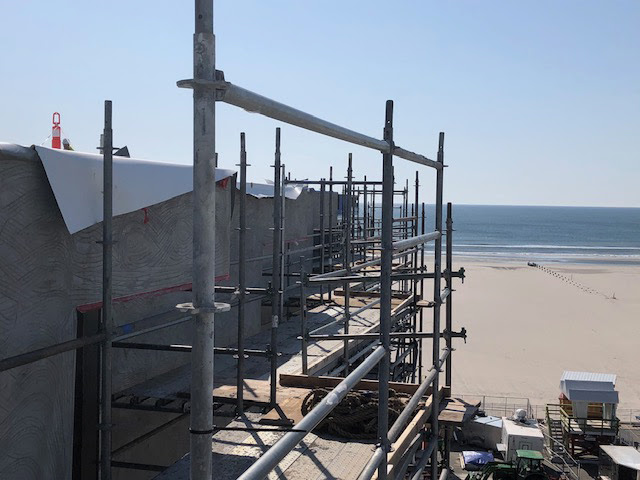 For more pictures visit www.superiorscaffold.com.  Call Tom at (215) 743-2200 today if you need romancing or scaffold – he’ll tell you stories that will plant you in your seat and make you want to cry.  Or he’ll play pole God with you and that will certainly make you cry. And for our musical selection we have…