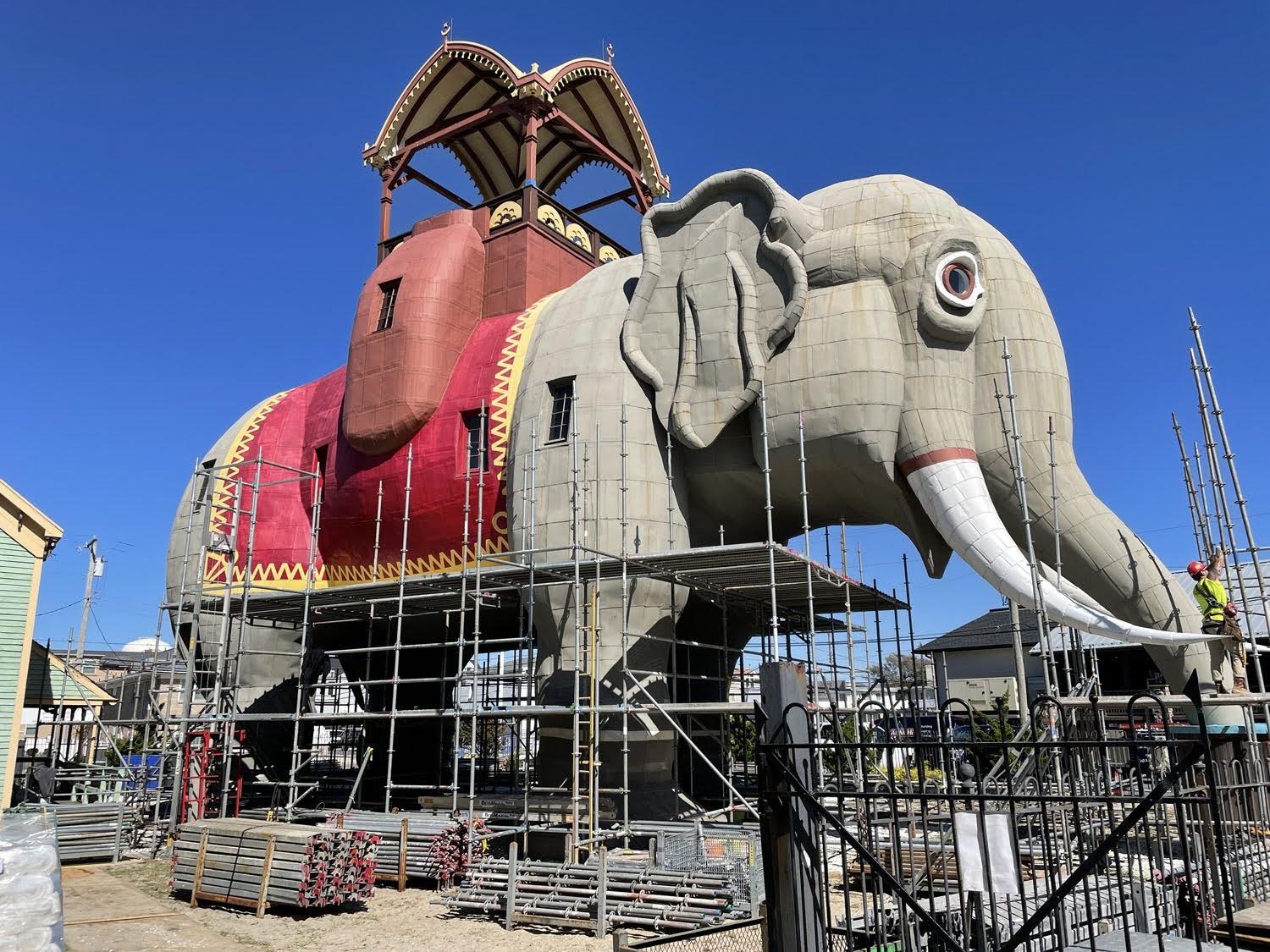 You can’t miss her. They say you can see her from eight miles away. She’s big, bold, beautiful and a survivor! 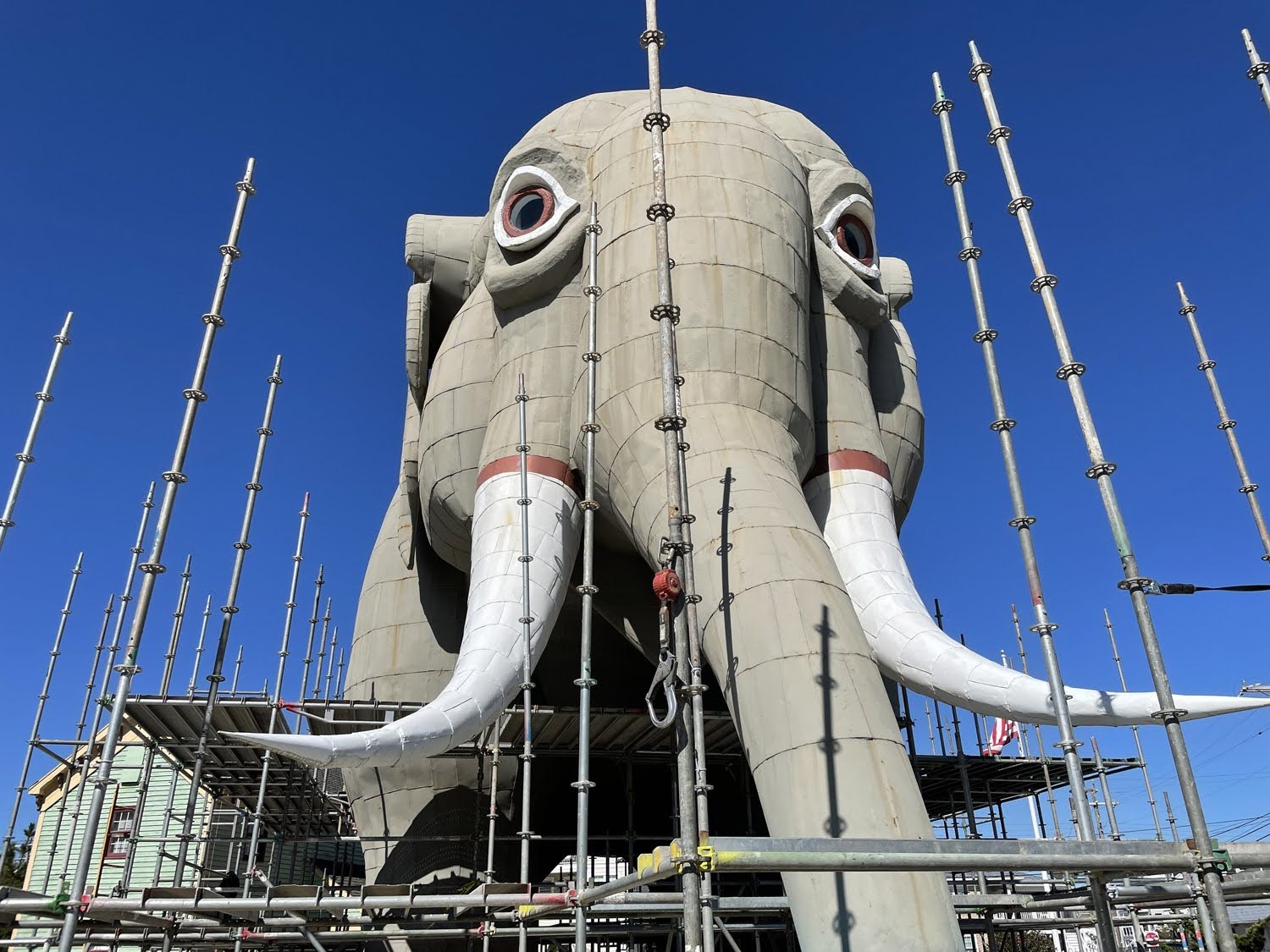 Lucy the Elephant, the six-story tall piece of zoomorphic architecture located in Margate, NJ, is a national landmark constructed of wood and tin sheeting featuring several rooms accessed through staircases in her legs. She was built in 1881 by James V. Lafferty to promote real estate sales and attract tourists to Margate and the Jersey Shore. And boy has she delivered. 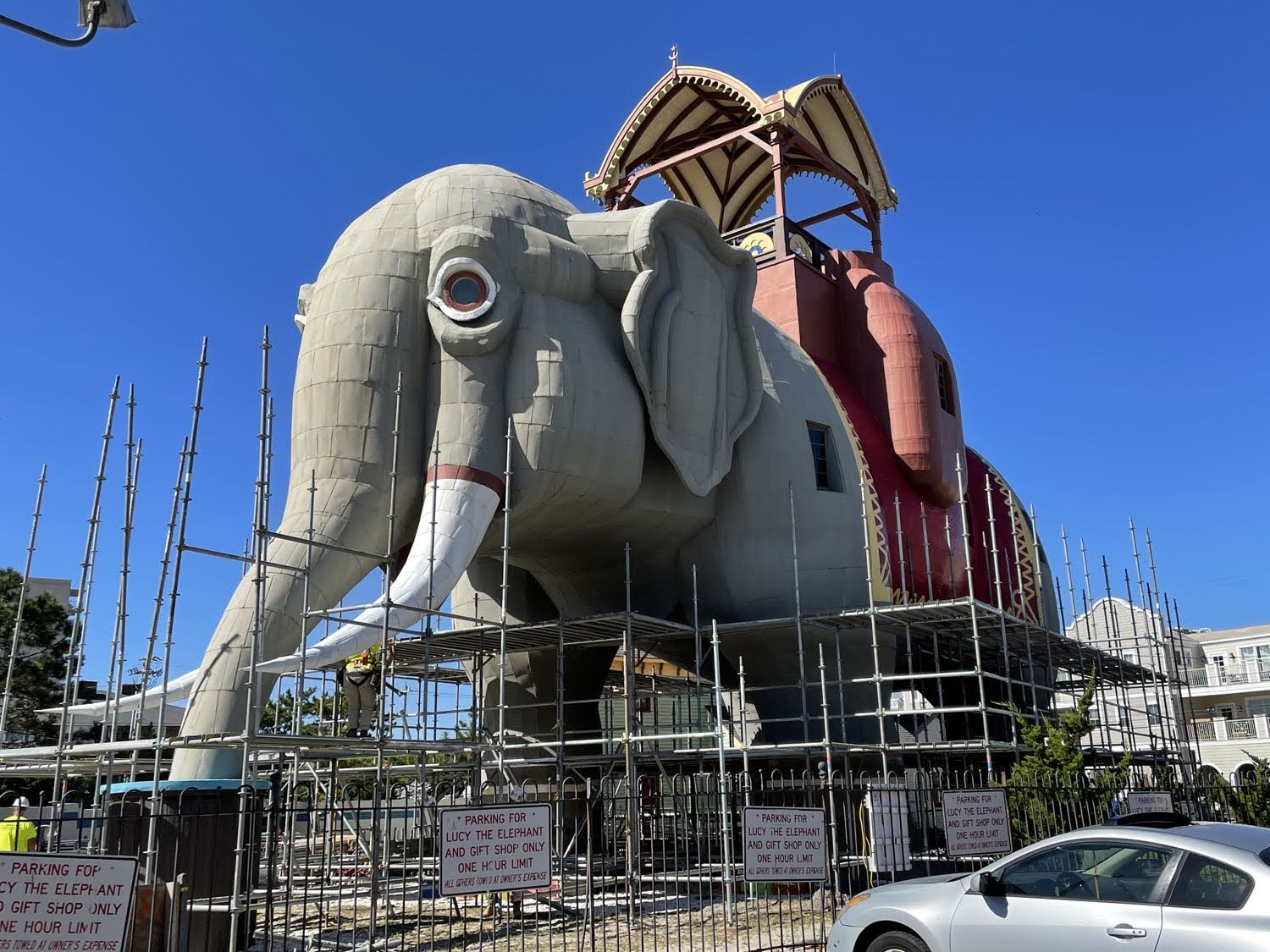 As the world’s oldest surviving example of zoomorphic architecture, she is getting a major facelift. Lucy the Elephant is having her 12,000 square feet of metal skin replaced because more than 50% of its exterior has degraded beyond repair. 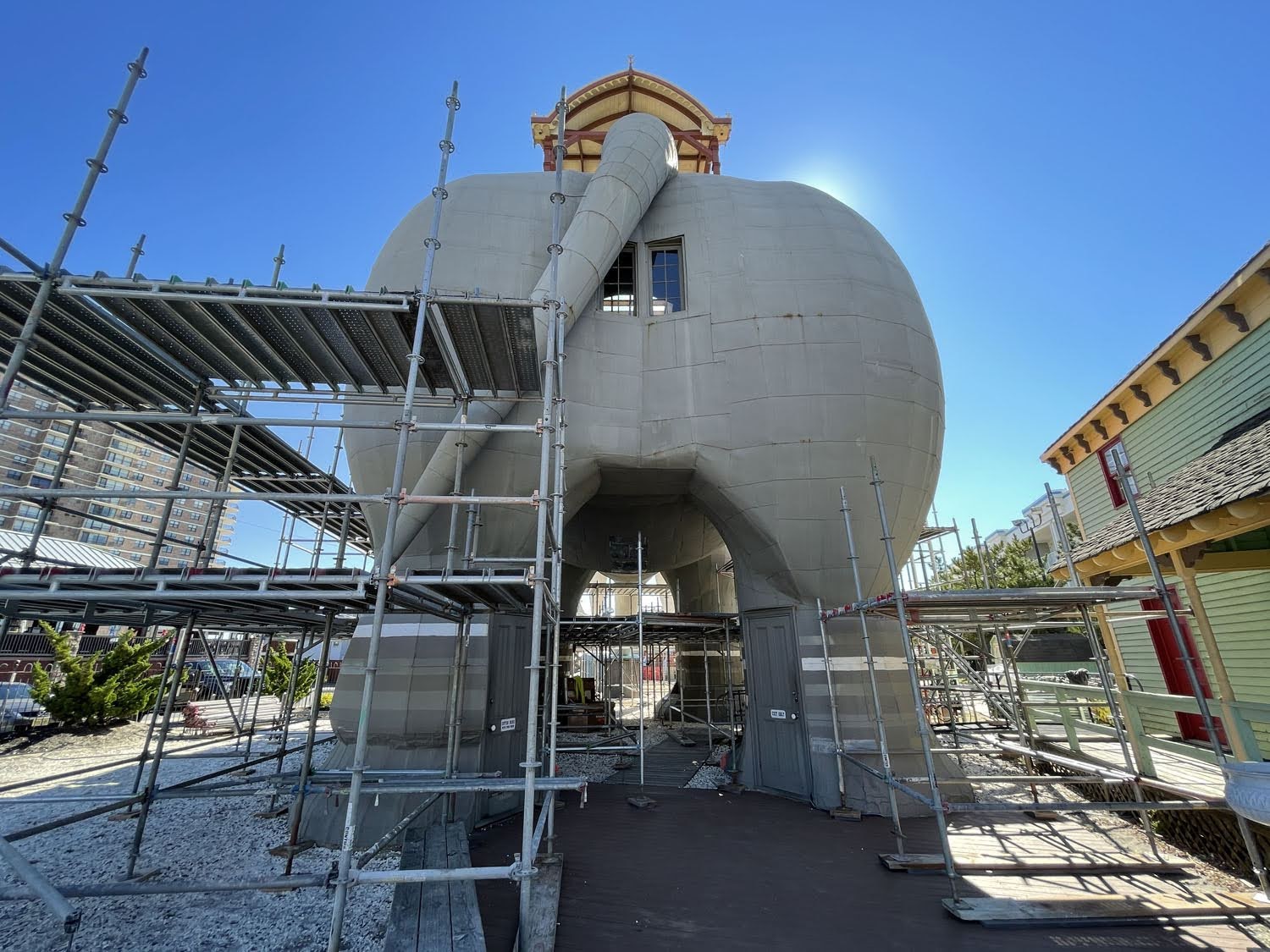 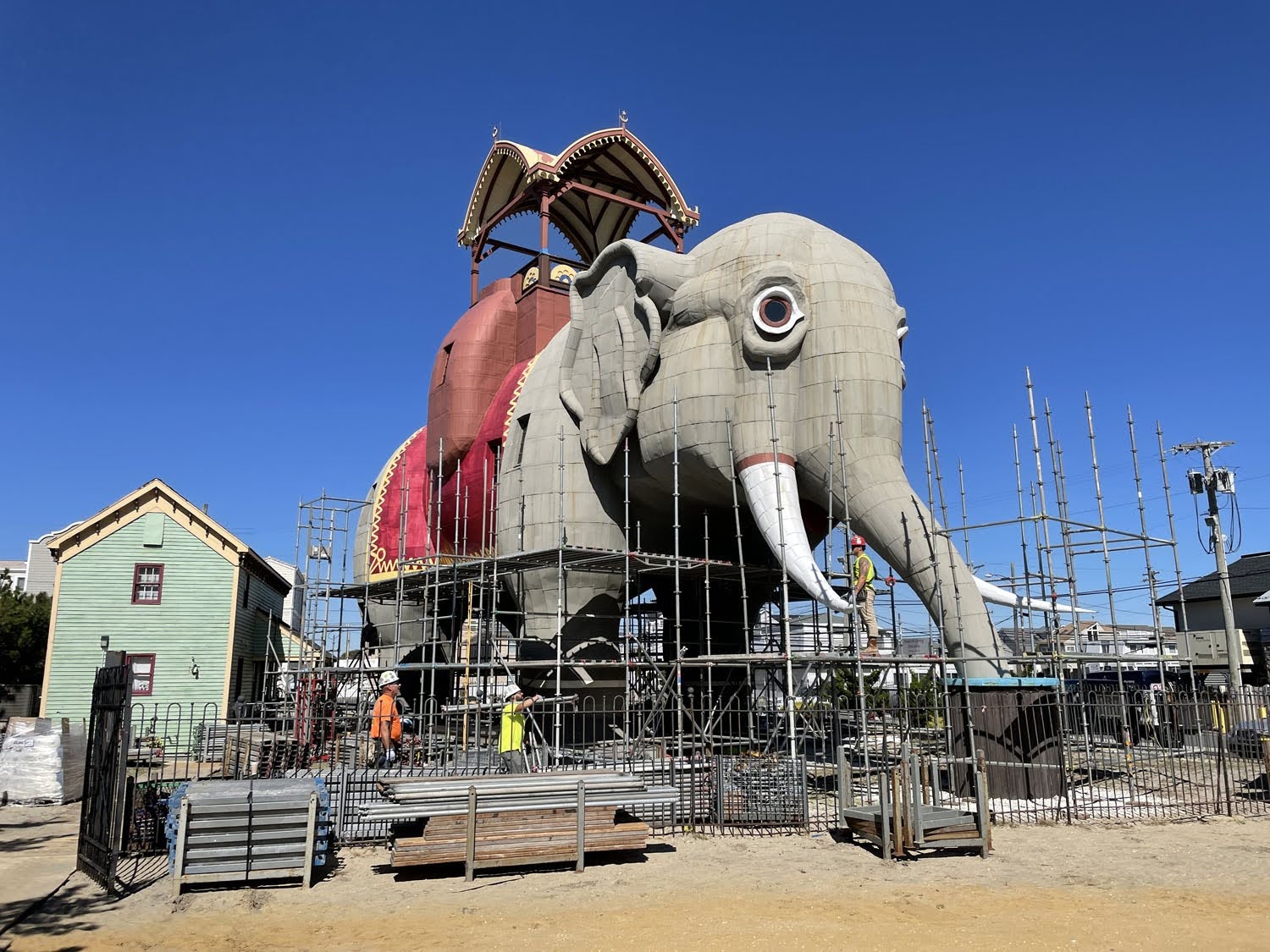 If she could only talk. She’d tell us about being sold several times, being used a pub (and nearly burned to the ground!), and as a summer rental. She could talk about being a media darling, hosting famous visitors such as Henry Ford, President and Mrs. Woodrow Wilson, and the Rajah of Bhong. 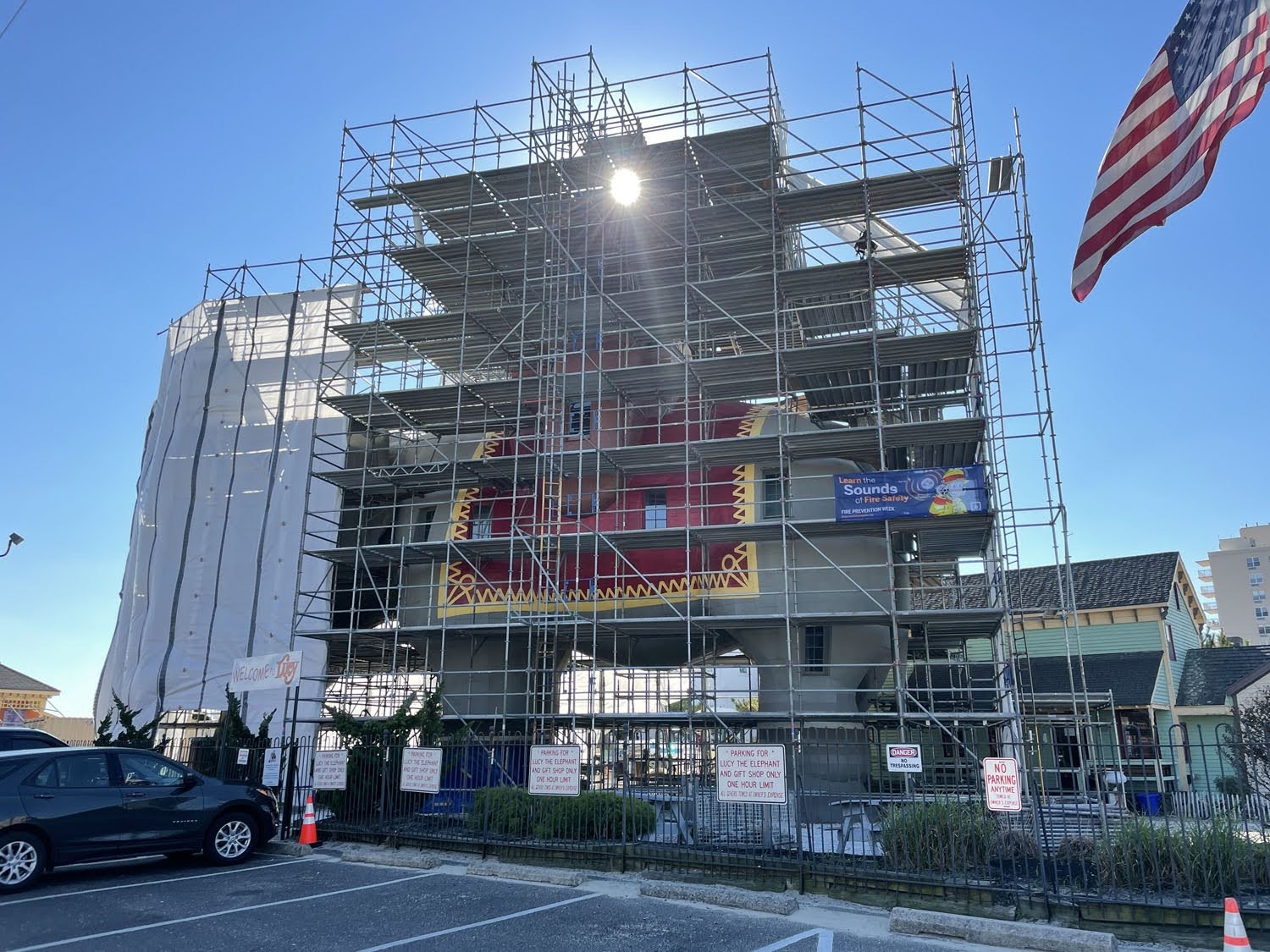 Lucy has survived storms and hurricanes. In 1903, one storm was so bad that she ended up knee deep in the sand, and volunteers had to dig her out and move her further back from the sea. Other similar structures in Cape May, NJ and Coney Island, NY, have not survived the elements. 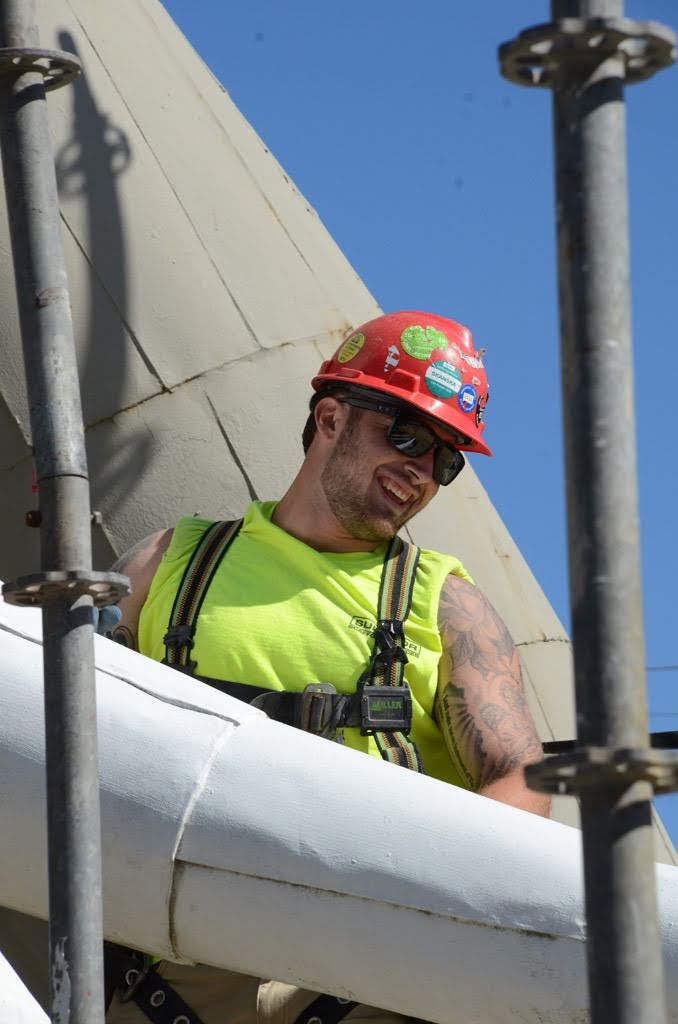 In 1976, Lucy was designated a US National Historic Landmark as the oldest surviving example of a unique form of “zoomorphic” architecture, and the oldest “roadside” attraction in America. Today, she stands as the most popular non-gaming attraction in the greater Atlantic City region. 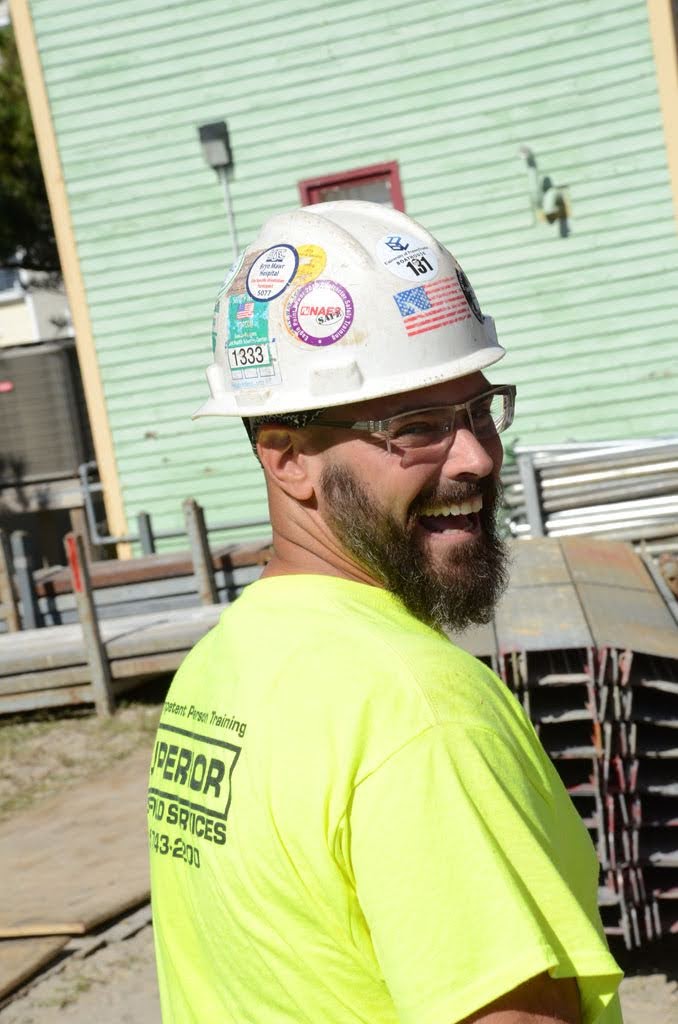 So it’s only fitting that after living an incredible life that she be given her magic back. Superior Scaffold was honored to be just one part of this giant puzzle to bring Lucy back to her full glory. Thanks to GC, Merrell & Garaguso, for bringing us in on this prestigious project. 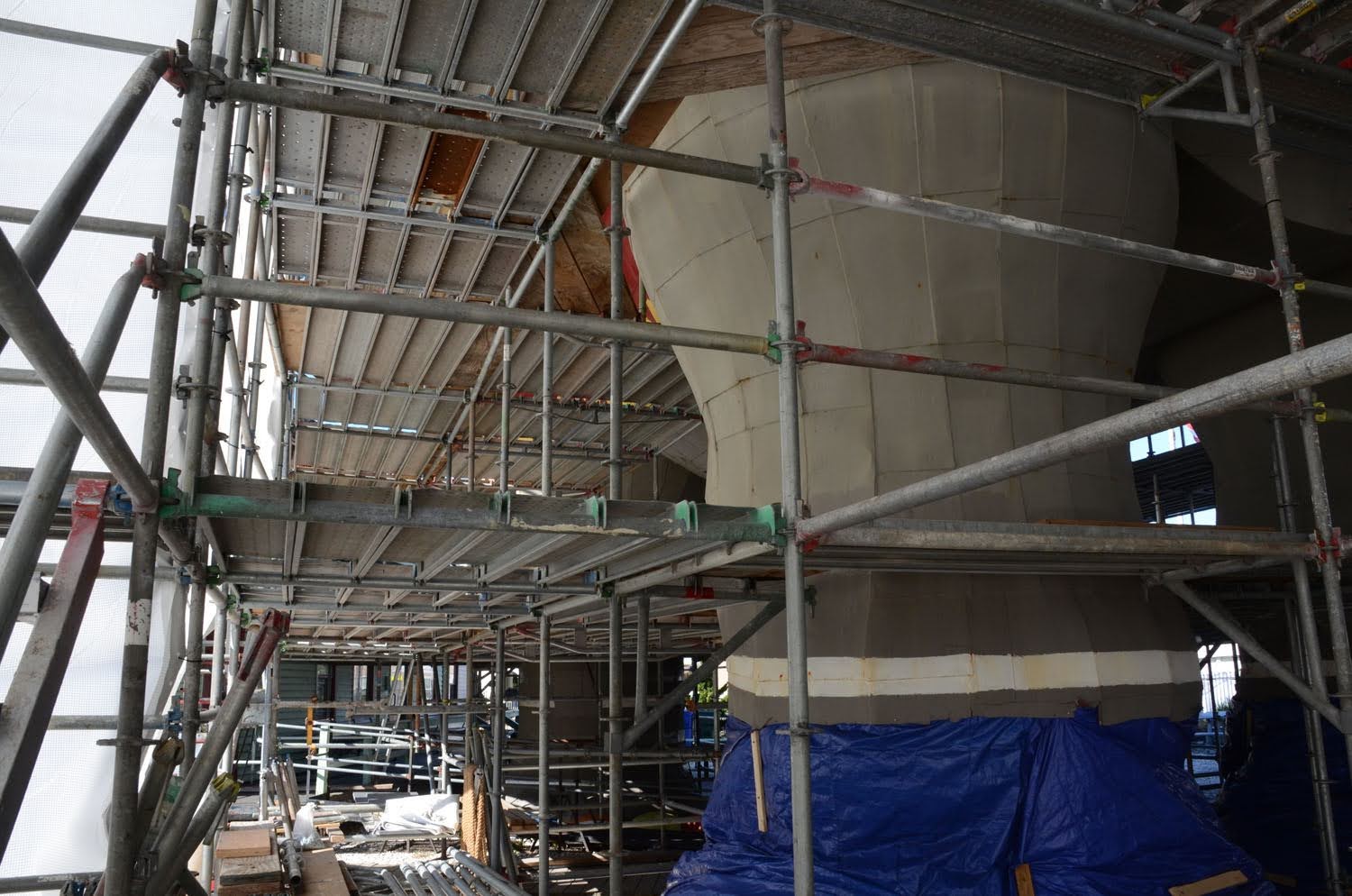 The project involves removing her entire tin skin and repairing the damaged wood beneath, and then re-tinning the elephant exterior. The wood beneath the tin is a special red cedar that is only available from one factory out of Connecticut to keep to the original design. Finally, painters will put the final touches on Lucy with a custom 40 mill thick paint that is being specially made to the exact specifications of her original paint and color so she will shine and last another one hundred years. 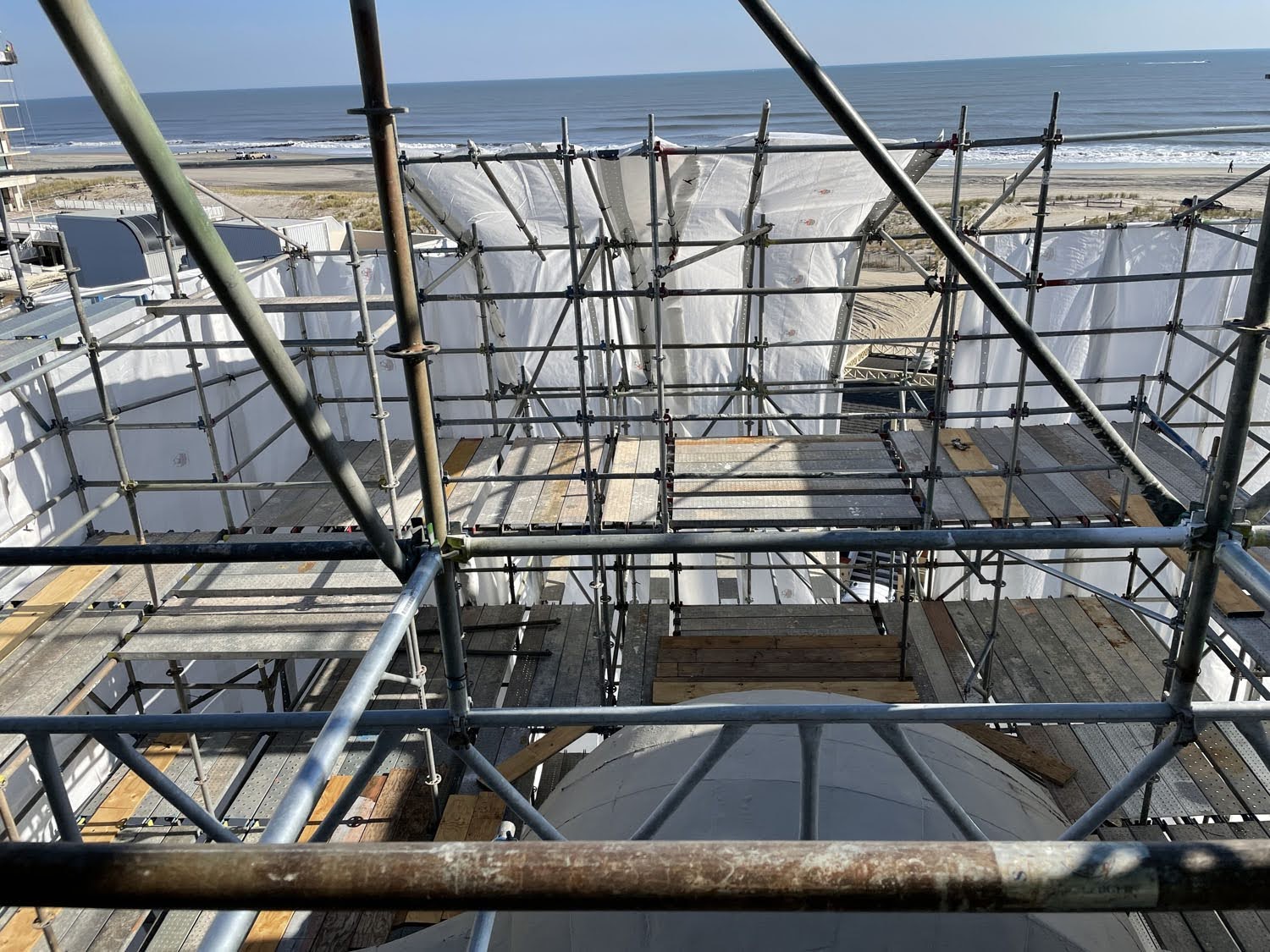 Our original scaffold blueprints, created by our engineer, were just a rough road map on how to erect scaffolding around this pachyderm.  But it was our supervisor, Joe Woulfe, and his amazing crew that assembled a most impressive scaffold. Like a giant puzzle, they wove the pieces in and out and around Lucy’s structure, following the contour of her legs, belly, butt, head, ears, tusks and body. 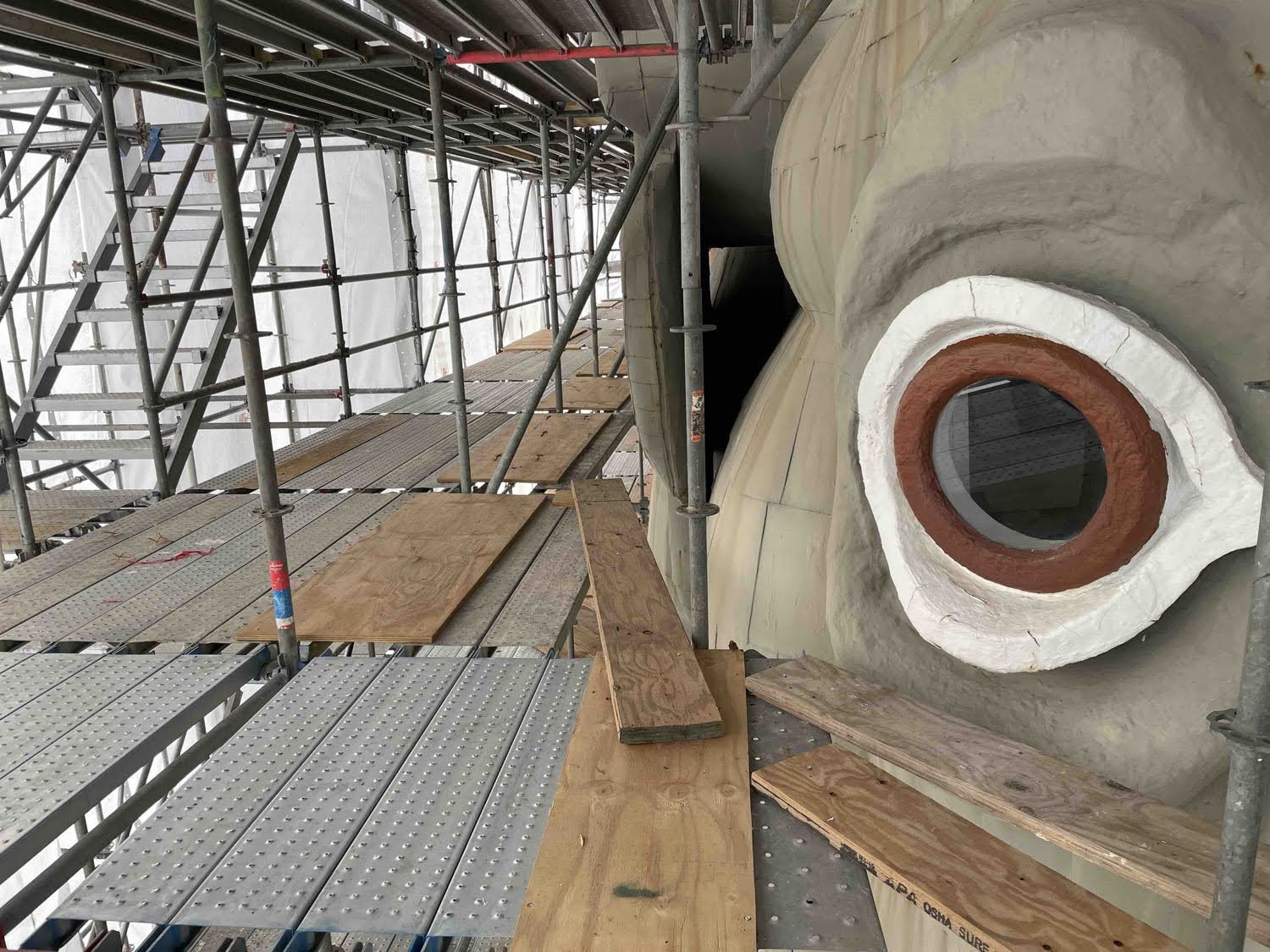 The goal was to keep the scaffolding as tight to Lucy’s form as possible to get all of the different trades, sheet metal workers, carpenters, painters, electricians, right up against her delicate skin. 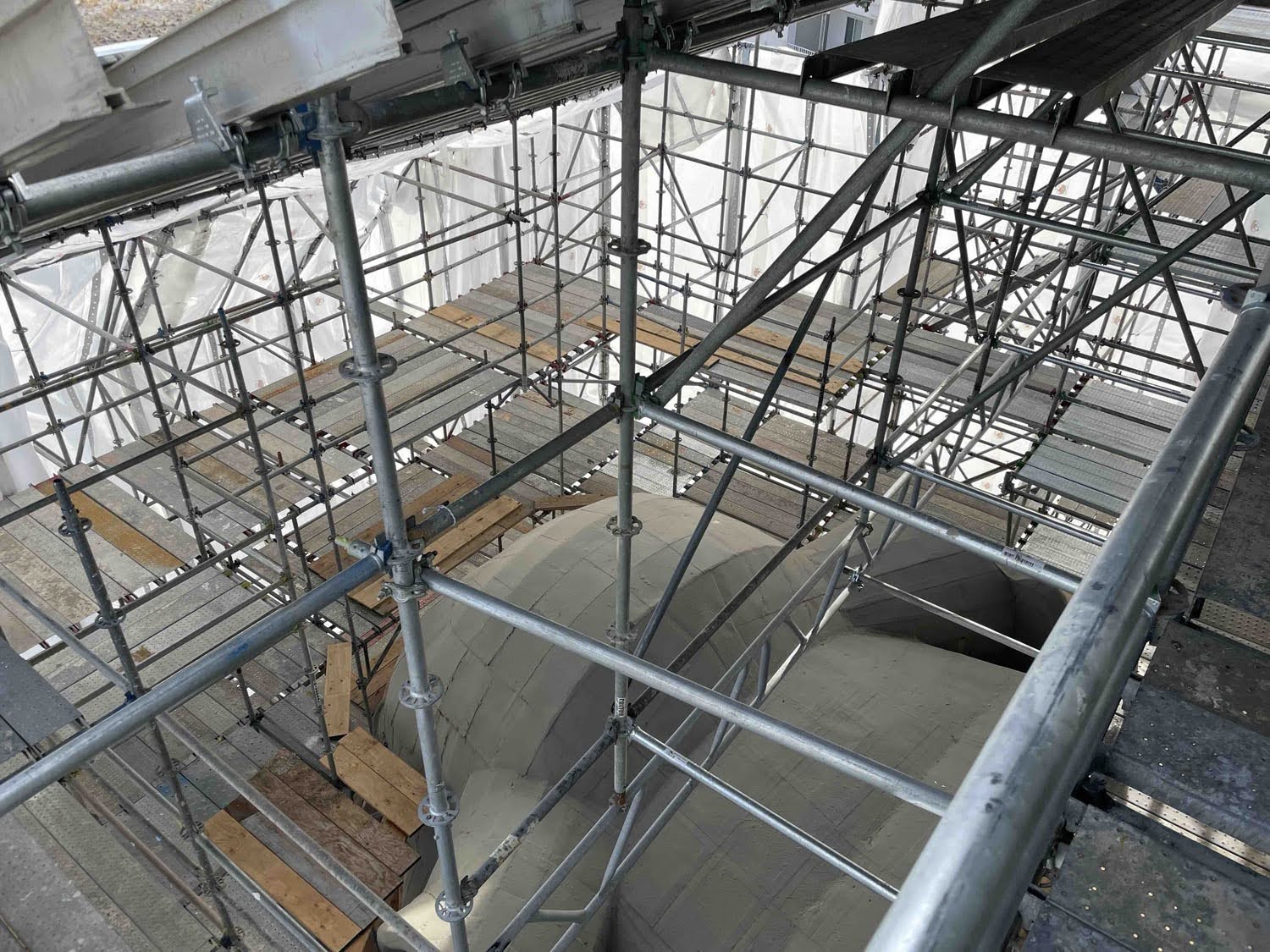 There is system scaffold all around Lucy, including the canopy at the top and also covering the wood howdah on her back.  It is decked at every level up to 65 feet high. The front elevation is 32’ wide x 40’ to top of her head x 75’ long. The rear elevation to top of canopy is 65’ high and her rump is 35’ high X 27’ wide. There is a stair tower for access and 3 ladders in various locations to access different parts of her. We also used one of our 400lb beta hoists for scaffold and work supplies. 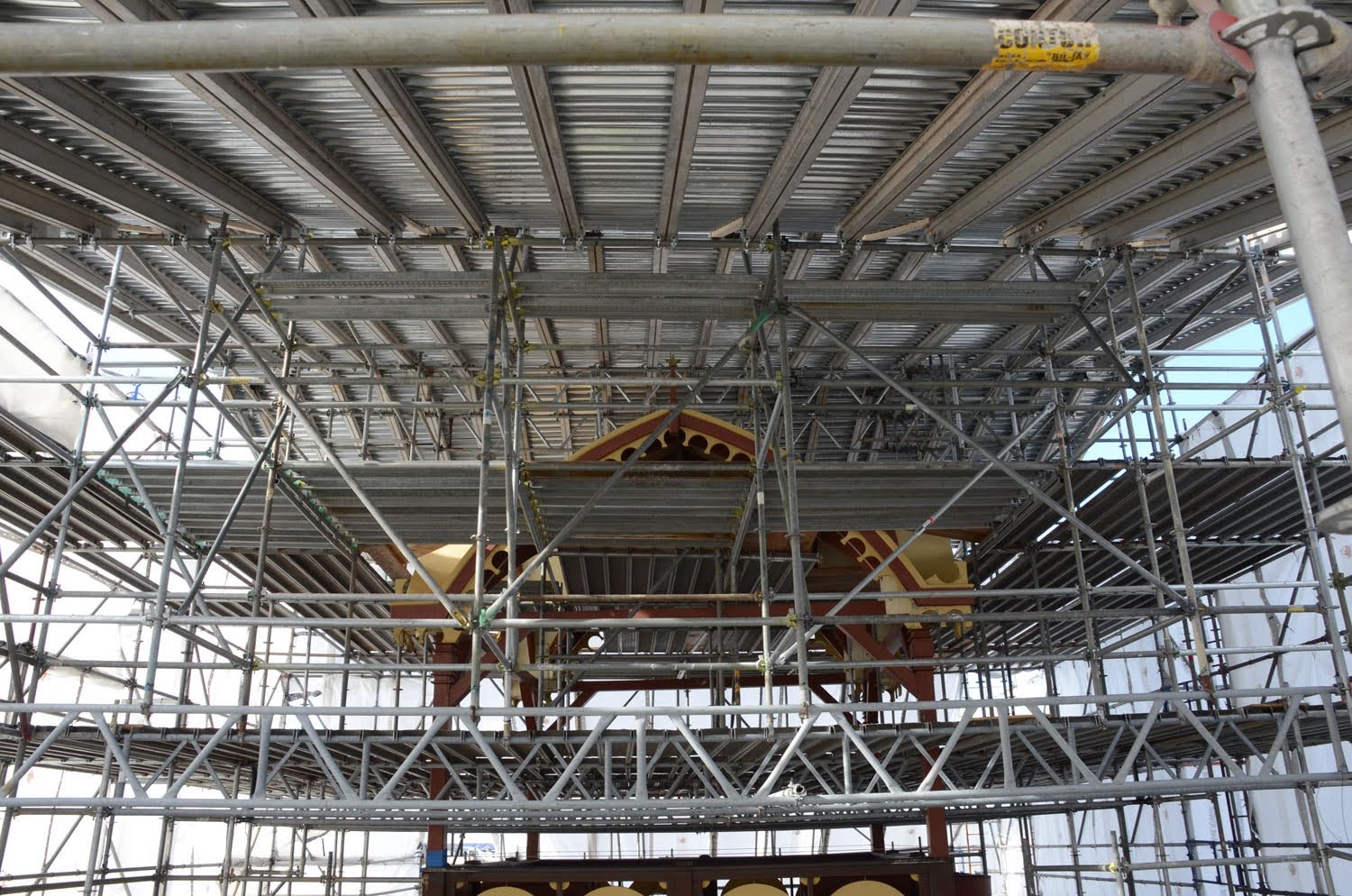 Our scaffold erectors built a sloped roof over her using trusses and corrugated aluminum to keep rain and sun off of the crew while the work was being done. They then wrapped the entire scaffold in thick containment wrap to keep the elements out and the warmth and debris in. Safety for the crews was of course one of our priorities. 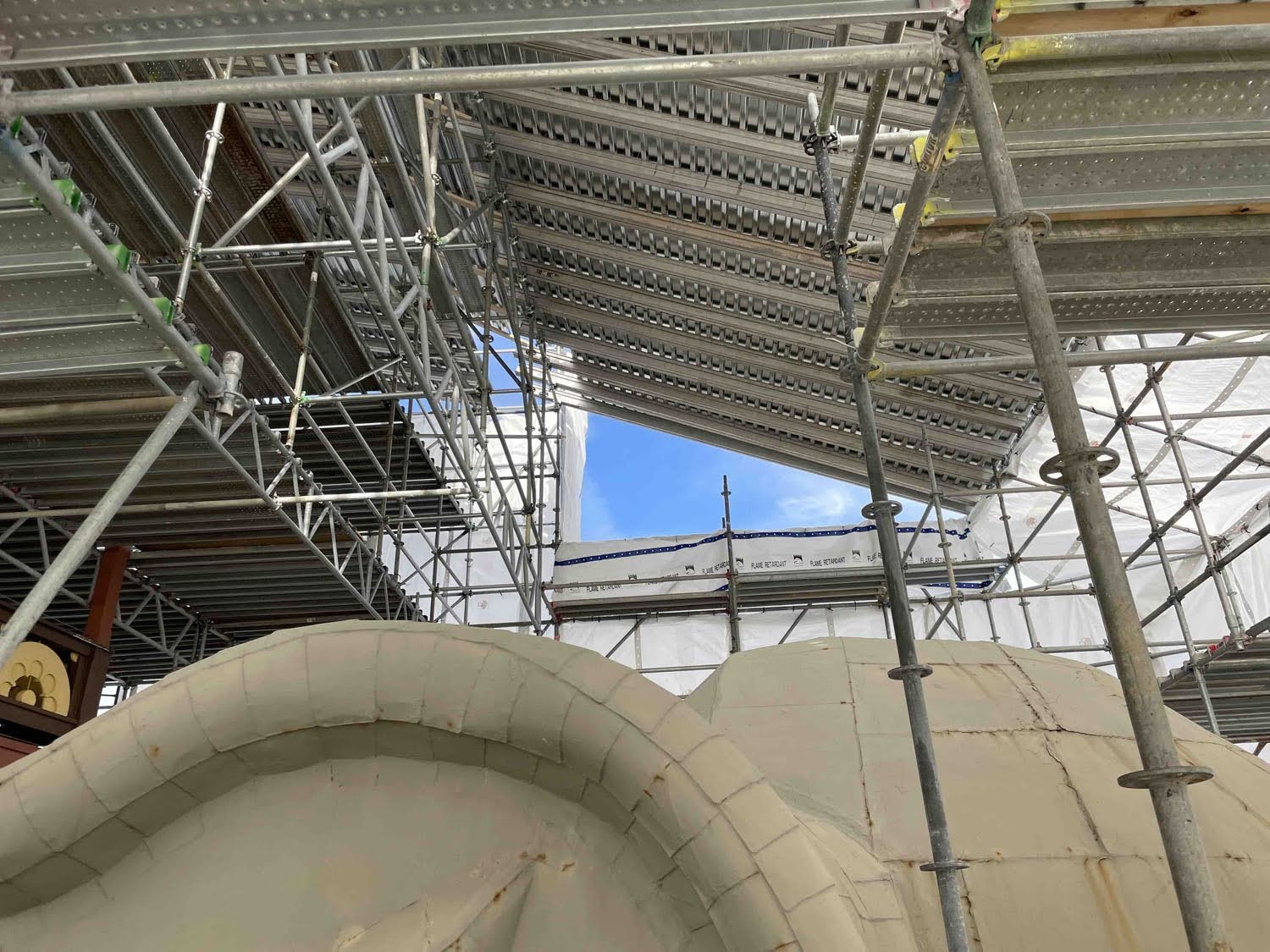 Even with the wrap, the scaffold build would still be tested by the elements: The Jersey Shore is notorious for wind, but what we weren’t ready for was the gale force wind and snow storms. These have tried the durability of our scaffold and the containment system that we installed. At one point, there was fear that Lucy would turn into a well-known flying elephant during one tremendous wind storm, but as she has done all along, she stood strong, as did our scaffold. 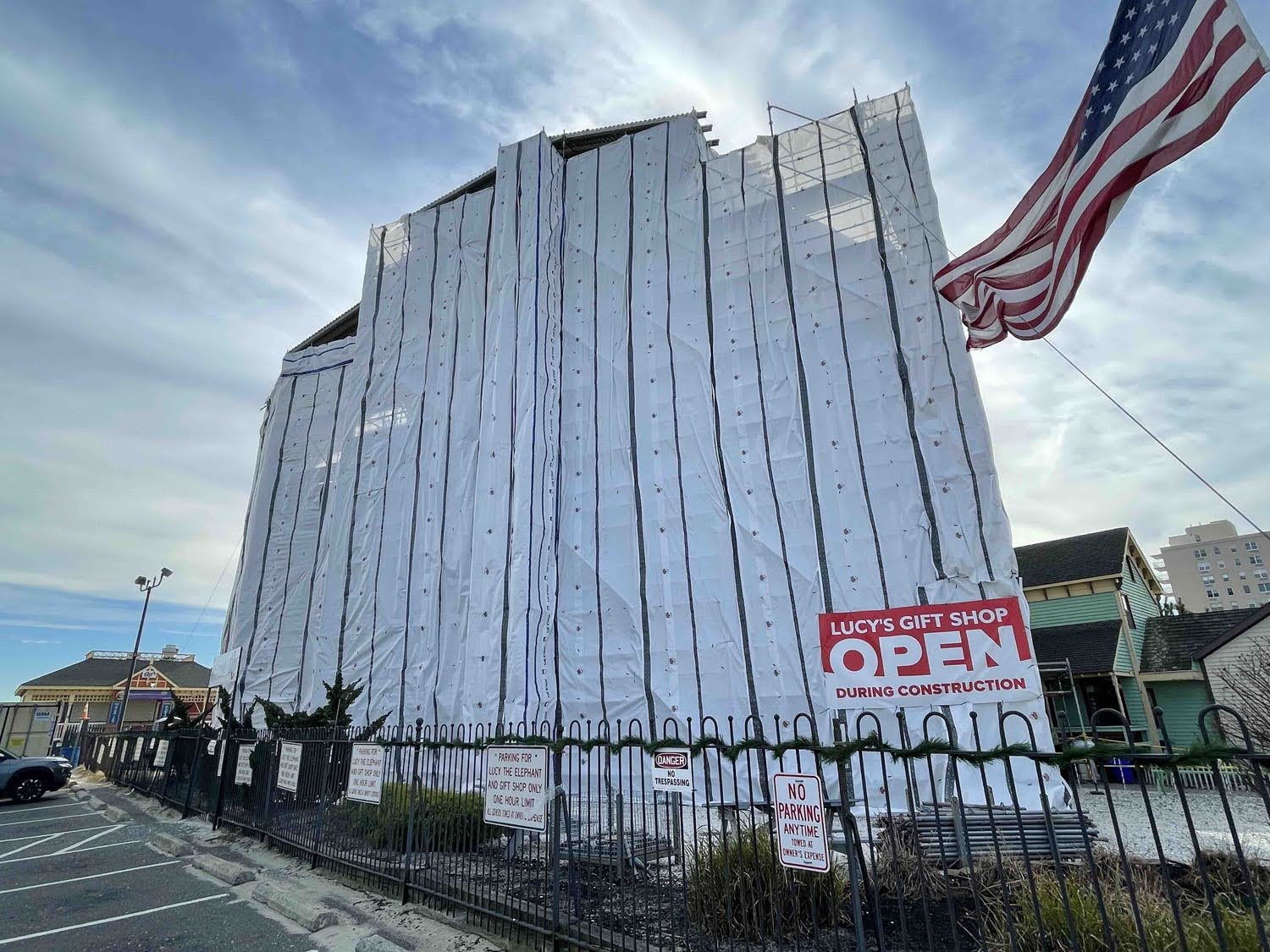 We are very proud to be a part of this renovation, and in the end the scaffold itself was as much of a masterpiece as Lucy. Workers doing the renovation commented on how amazing it was to get so close to every inch of her. 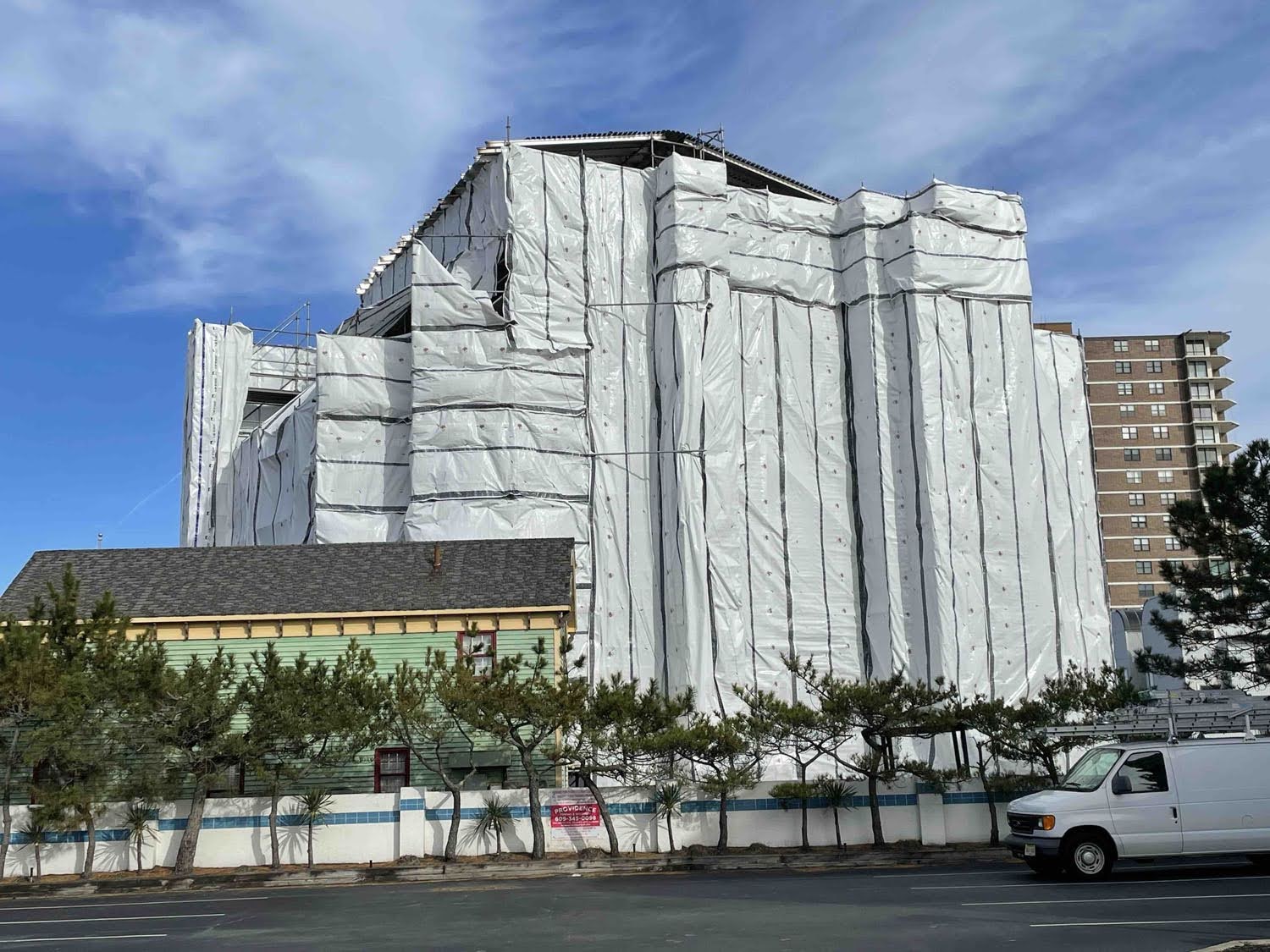 Once this renovation is completed, Lucy will have at least another one hundred and fifty years of stories to tell. If you are a real nostalgia buff, she can be rented on VRBO where you can spend the night inside of her and gaze to the beach from any of her 22 windows. And if you haven’t ever seen Lucy in person, she’s well worth the trip to Margate, NJ! 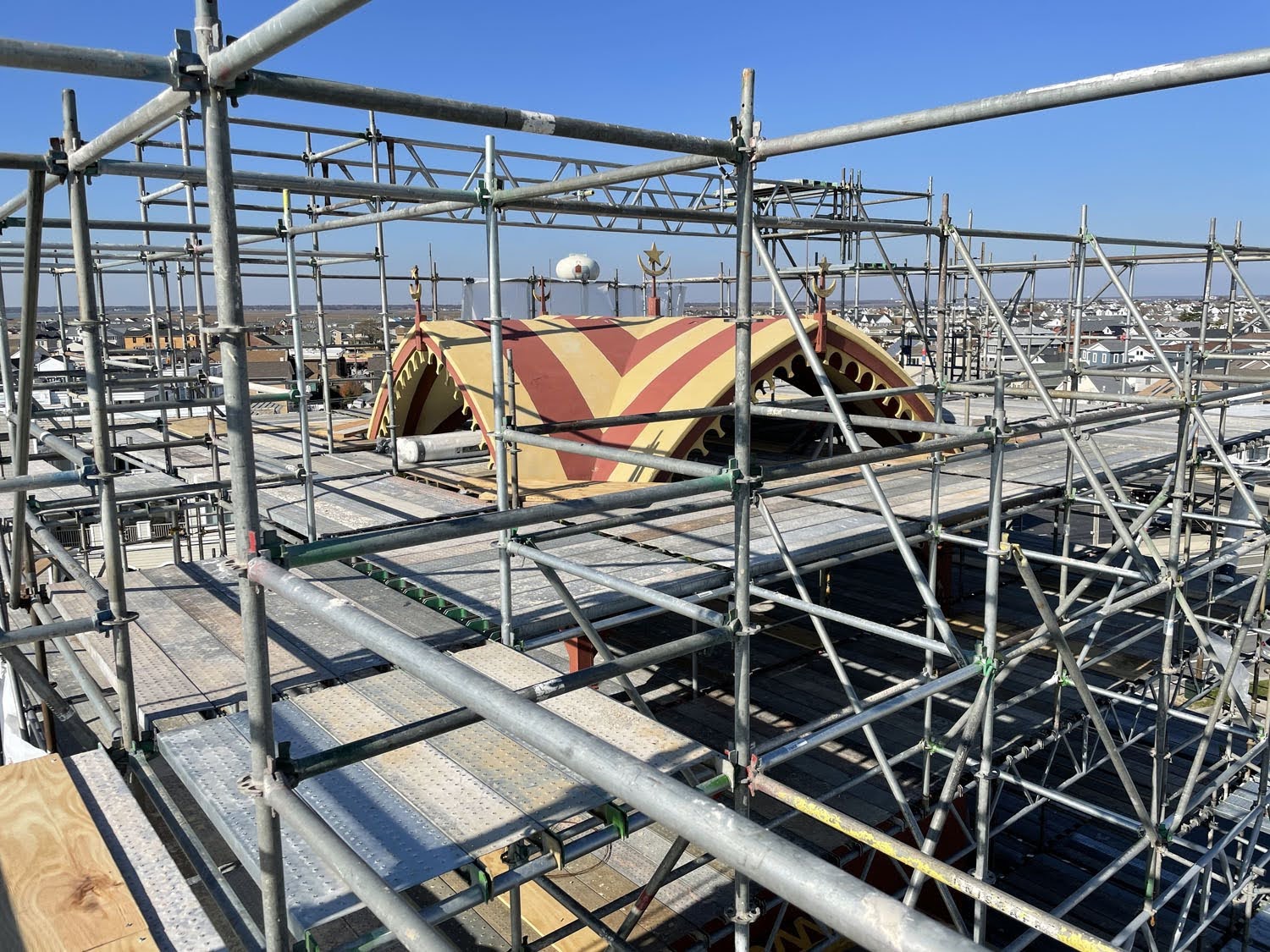 Here’s to another 150 years of Lucy the Elephant! 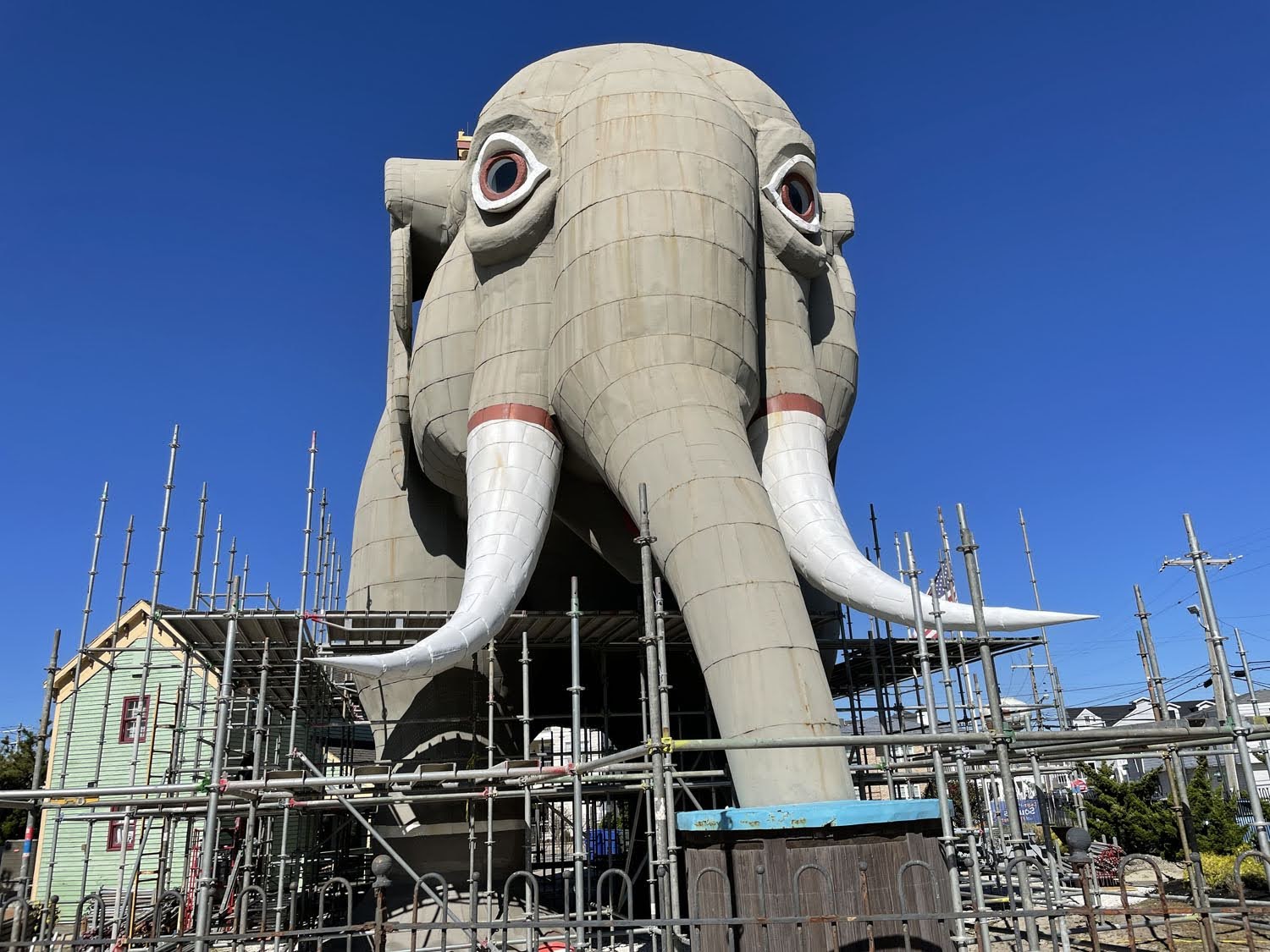 And if you should need the biggest, baddest scaffolders in the business to carefully and safely get your crews next to your renovation project call Superior Scaffold today at (215) 743-2200 or visit www.superiorscaffold.com. 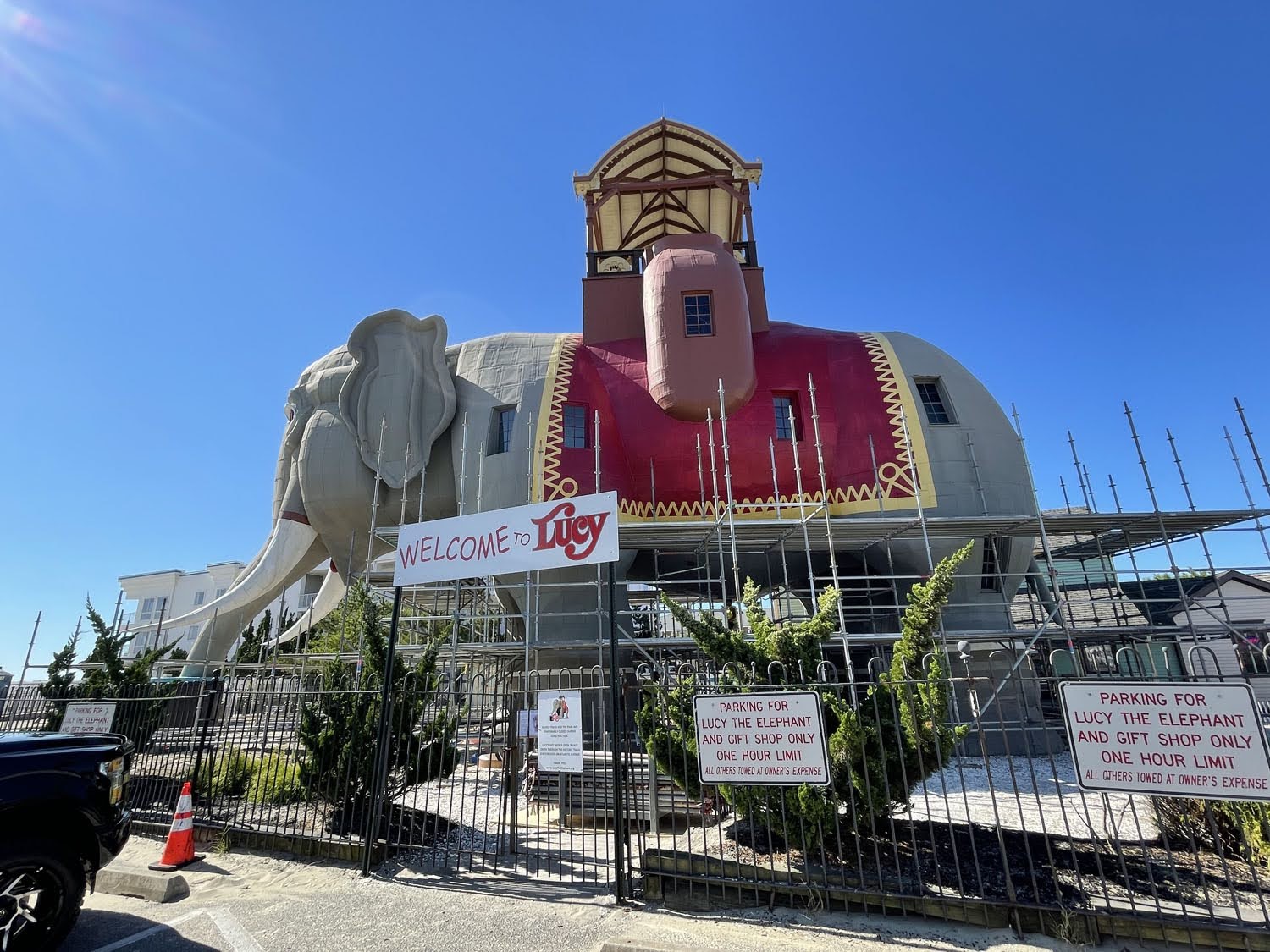 And for our musical selection – well, you guessed it.  Enjoy.