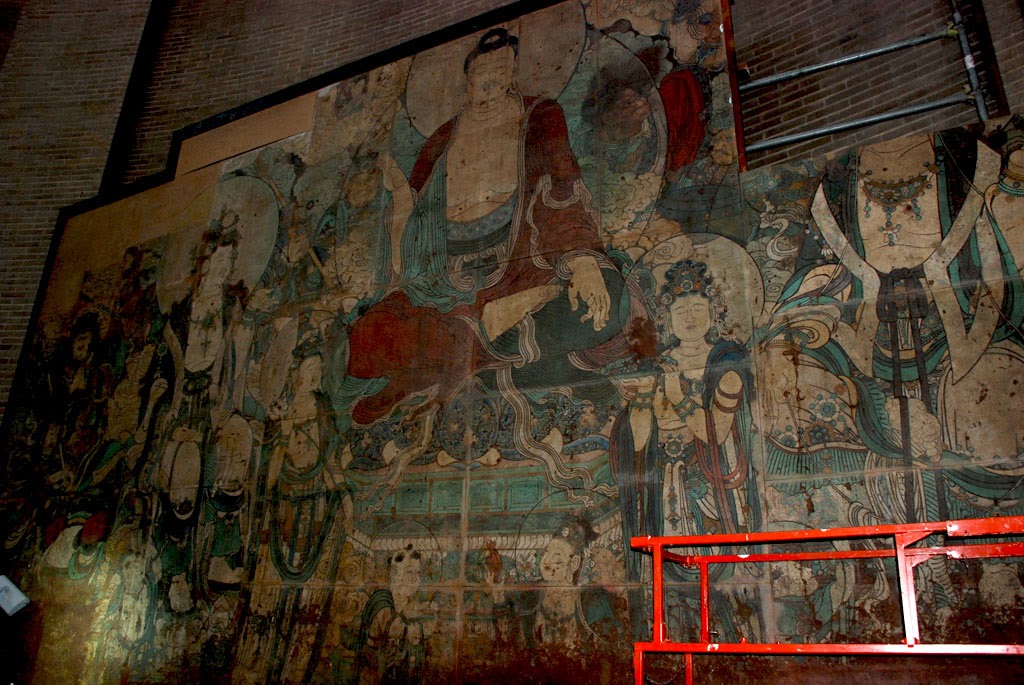 It’s not often that we get a call for scaffolding one project right next to another but that’s just the case here.  We are currently providing scaffolding and shoring all over the demolition of Penn Tower for the new Patient Pavilion at the hospital of the University of Pennsylvania. 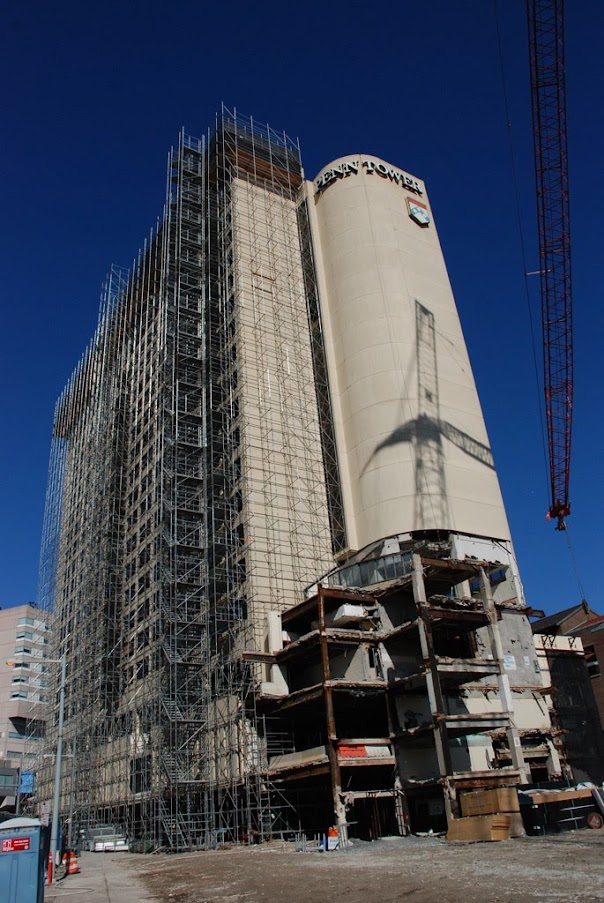 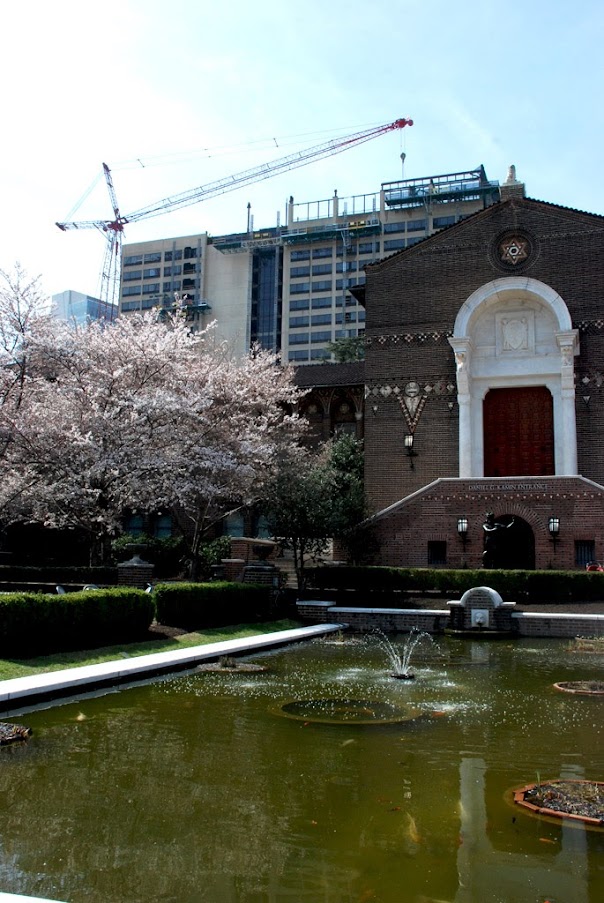 It’s a massive job that we will be blogging about soon. 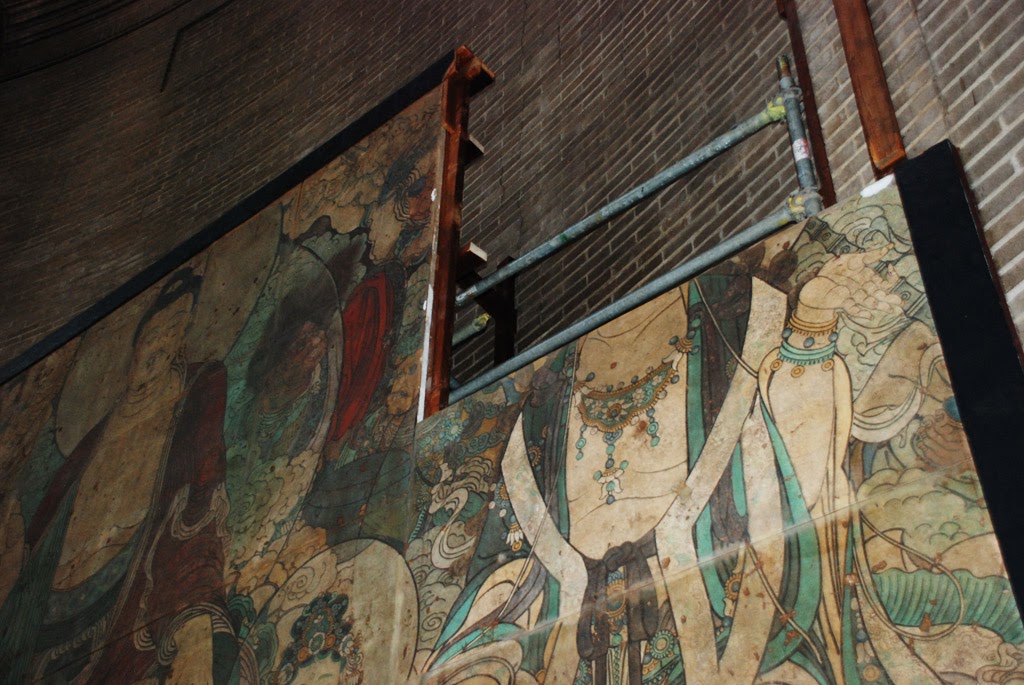 But the unique thing about this job isn’t just that it’s located directly behind Penn Tower at the University of Pennsylvania Museum of Archaeology and Anthropology but it’s that we were called in to provide scaffolding services for restoration crews to dismantle two giant 16 foot tall 14th/15th century Chinese Buddhist wall murals from a Ming Dynasty monastery.  These murals were reported to have come from Guangshengsi Monastery in southern Shanxi Province, China. 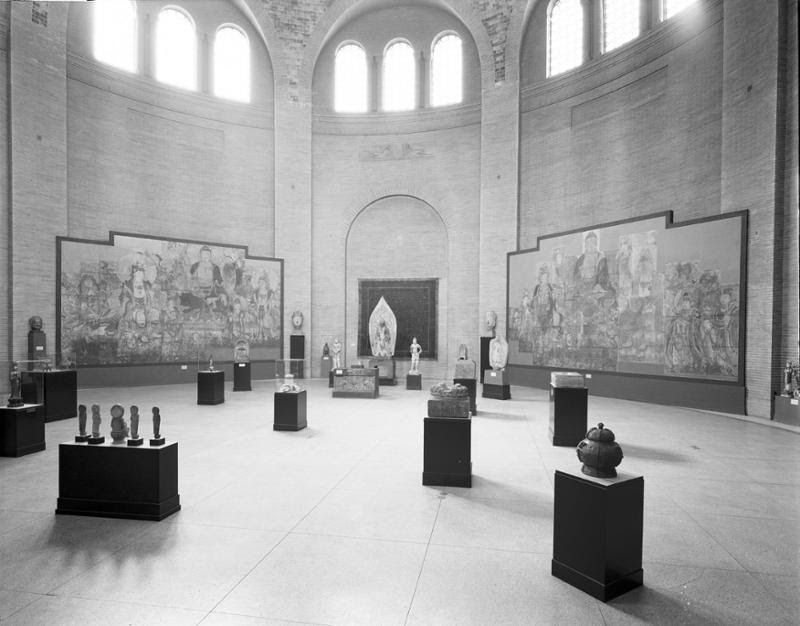 And what’s even crazier is that they are being moved because of the demolition of the building right next door.  Yes, you heard right.  These giant murals are just two of thousands priceless artifacts that are being moved so the vibrations from the heavy equipment next door doesn’t damage them. They, among others, are being moved into storage for safe keeping while the old building comes down and the new hospital complex goes up.  It seems that the old Penn Tower and the Museum are in such close proximity and share the bedrock and they are particularly worried about the vibrations when crews start digging down for the footers.

Vibration specialists have been called in and monitoring sensors have been placed throughout the museum to keep a vigilant eye.  You can read about that here at the museums blog.  Senior conservator, Lynn Grant, and her team of specialist have had a giant task on their hands.

So, you see, this job isn’t as massive in size as the Penn Tower demolition but it’s just as important. These murals were brought into the Museum in the early 20th century in pieces and then assembled onto a type of scaffolding themselves to keep them in place.  When the murals were taken off of the monastery walls, they were assembled into larger panels and backed with plaster and wood for support. These larger panels are the separate segments visible today. 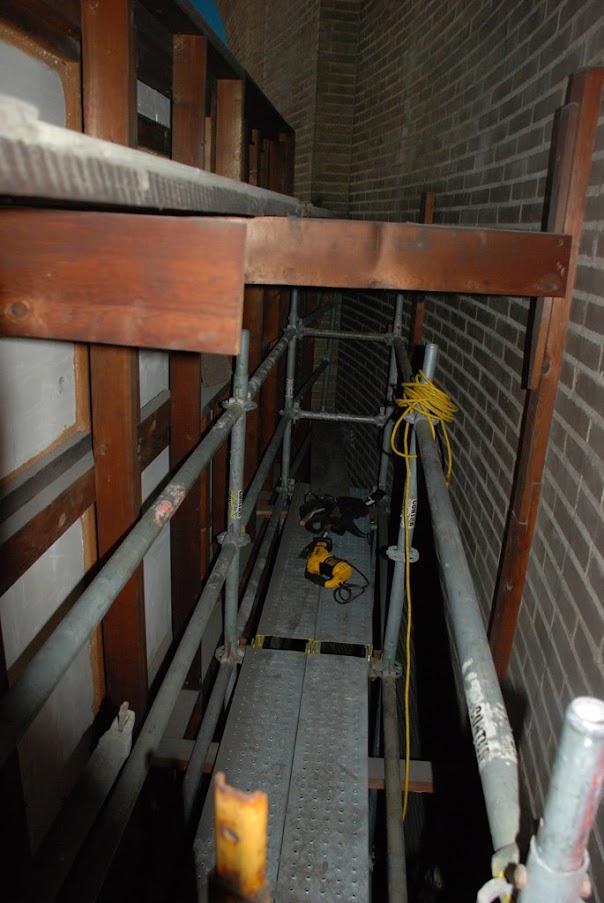 We had to provide scaffolding behind the murals so crews could get access to detach each panel one by one and move them into storage.  And although it seems straight ahead, there isn’t much room back there AND we could only get the scaffold through a tiny trap door at the base of the mural. 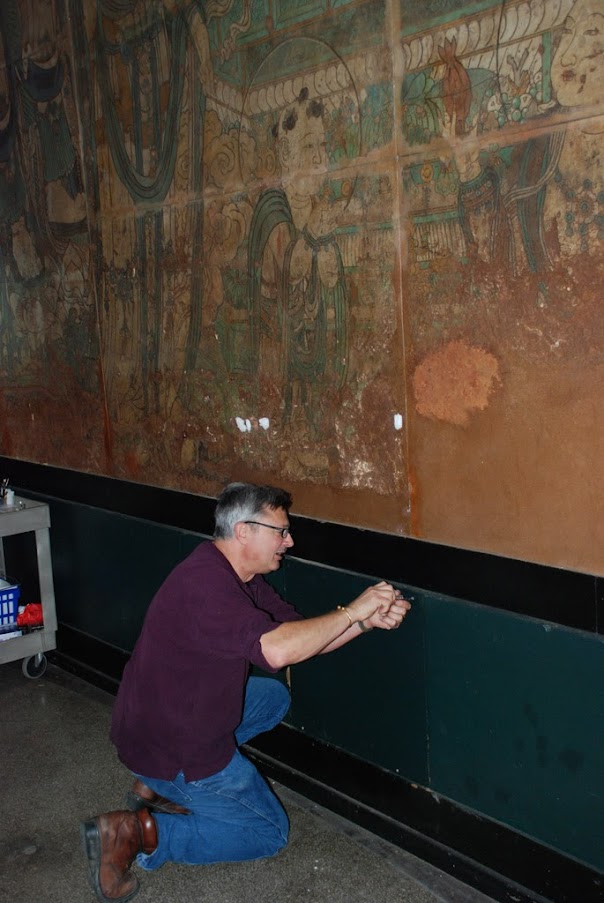 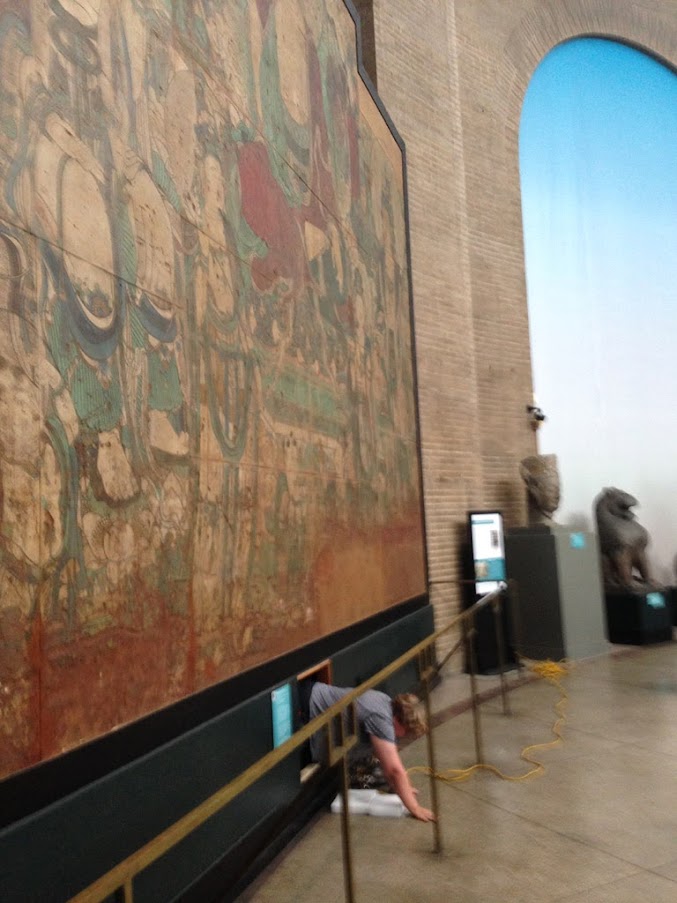 Above left, see top estimator, Pat McAndrew, about to open the 2 foot by 2 foot access port.  And in the shot to the right, Lynn Grant shows us just how small it is.

It was through that access way that our crew had to hand in and assemble this scaffold.  Originally we were thinking standard 9 foot trees but given the size of the opening and the limited room behind the mural we went with 6 footers.  We also added 6’ steel and wood plank giving crews access to the entire elevation of the mural. 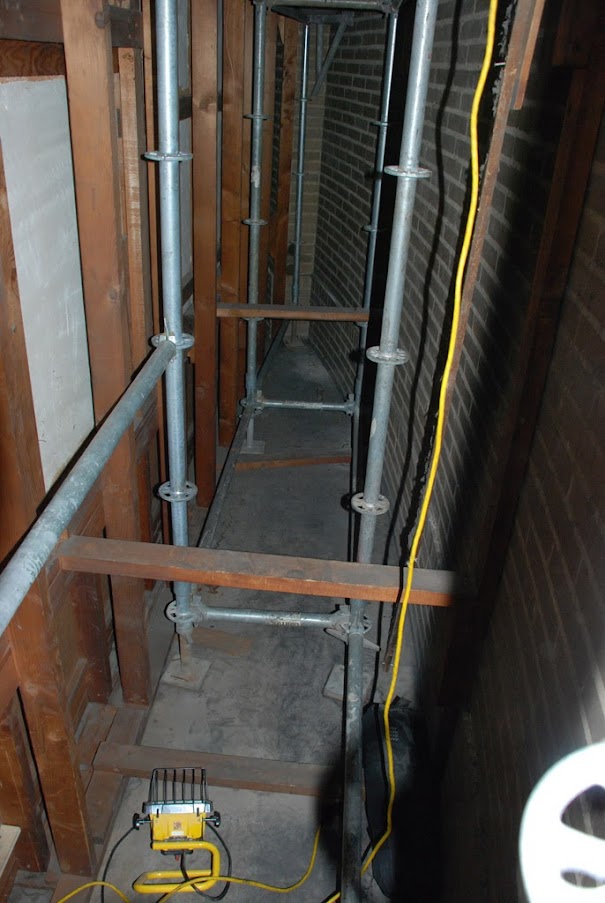 And on top of everything, we had to be super careful to not touch or damage the mural in any way.  We specialize in working with delicate historic buildings and structures and this was no different.  We’ve done sensitive work in the Museum before helping install 1700 year old Roman Mosaic tiles exhibit – read about it here. 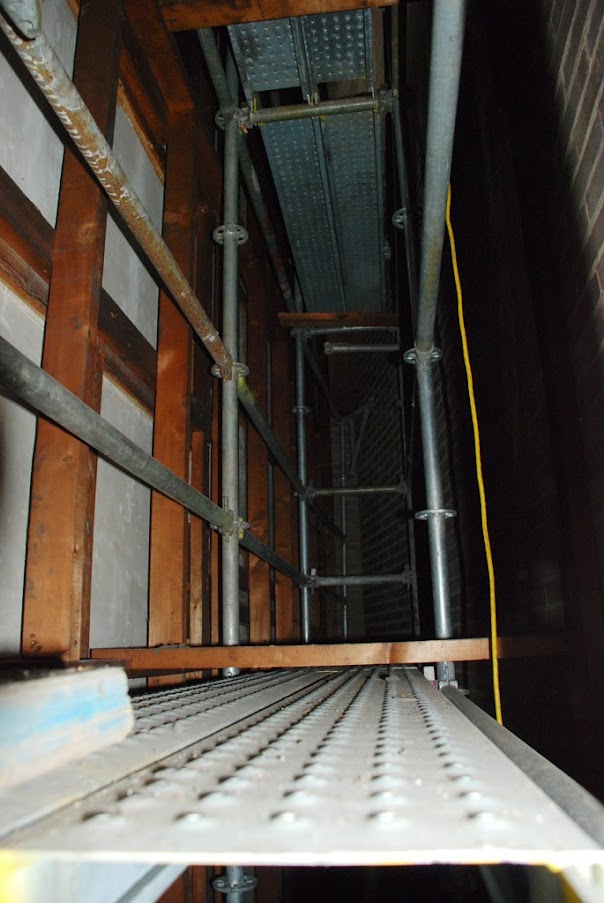 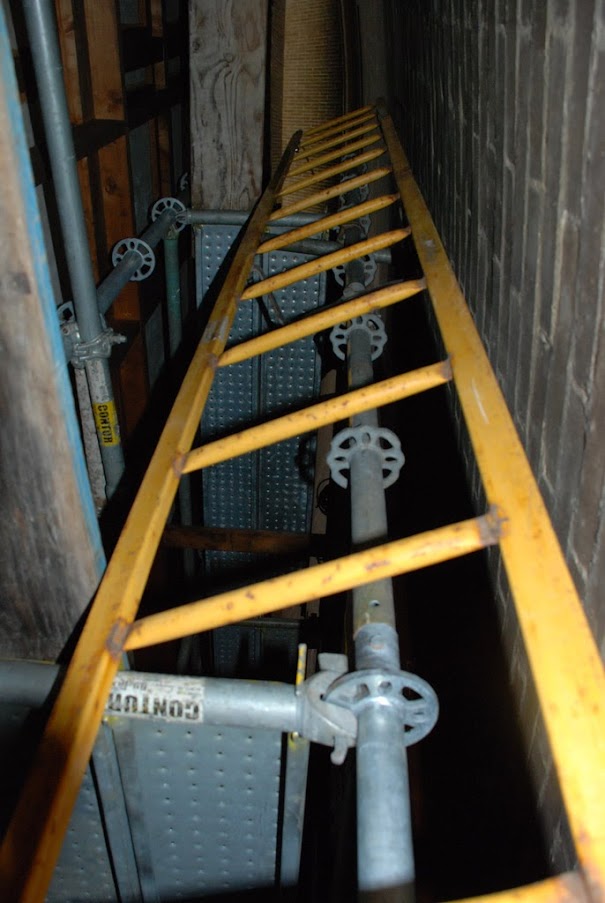 But before crews can remove the panels, conservation specialists like Emily Brown have to stabilize the ancient mud and paint.  Here she applies a dilute adhesive to secure unstable paint on the surface. 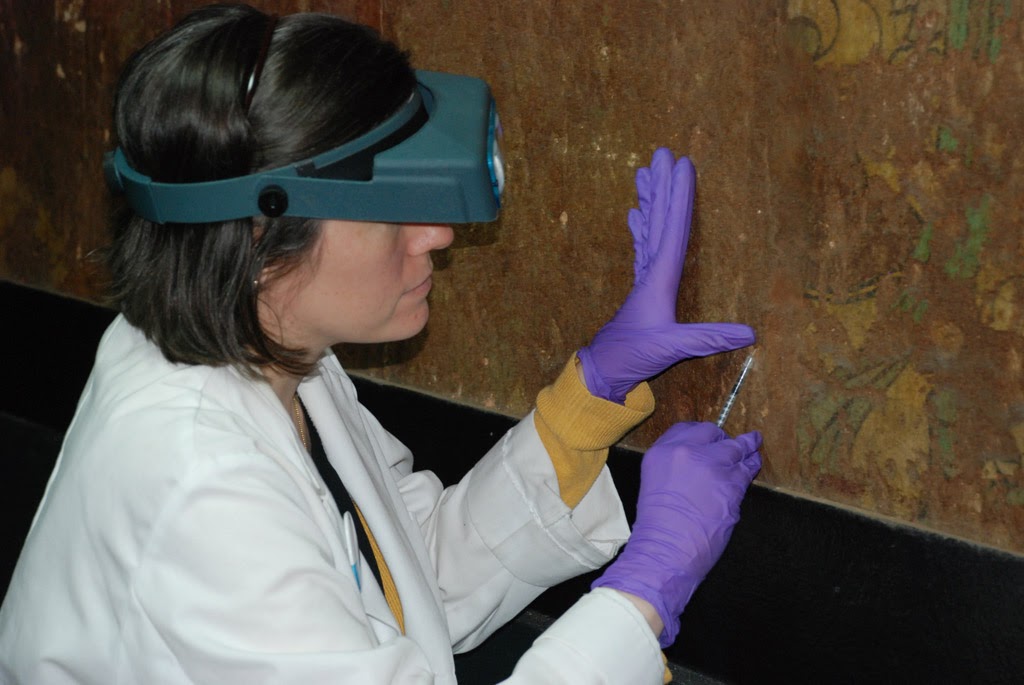 The murals are painted on a mud surface and follow a basic mud-ground-paint construction pattern.  Essentially, there are two different mud layers under these Buddhist murals.  But I won’t get into too much detail; these conservators are the experts and here’s a link to an article that can explain just what these beautiful murals are made out of and how they are preserving them for generations to come. 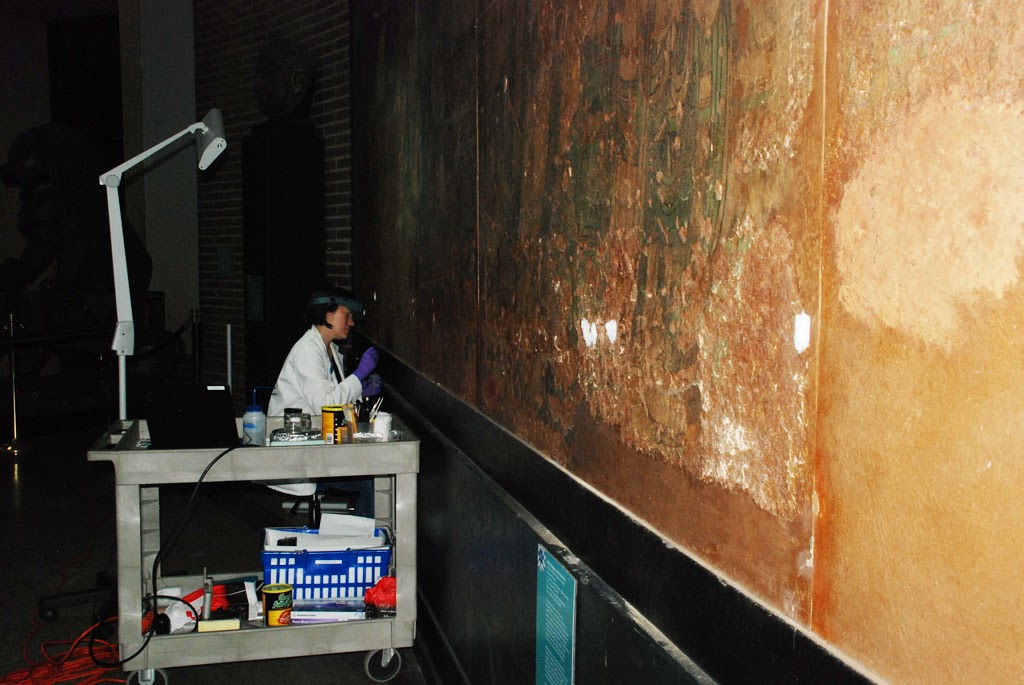 Founded in 1887, the museum first opened at its present site in 1899. It houses some of the world’s great archaeology treasures encapsulating and illustrating the early cultures of ancient Babylonia, Egypt, China and Native America, dating from as far back as 2600 B.C. 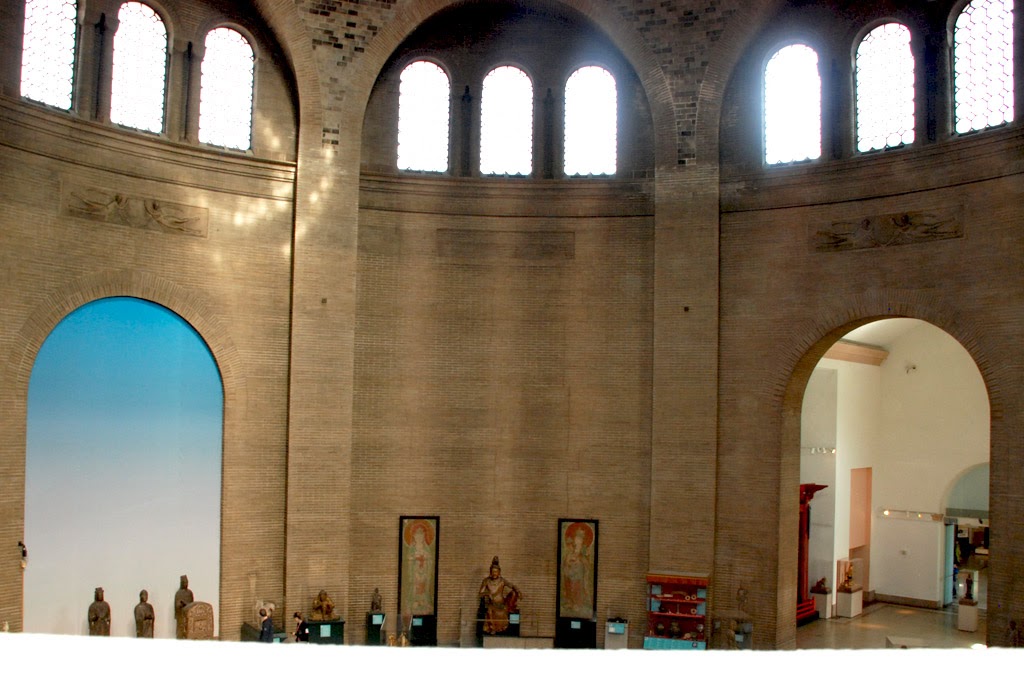 Superior scaffold was proud to lend a hand with these ancient artifacts – and to help make way for the new patient pavilion next door.  It just goes to show how no job is too big or small for us.  We pride ourselves on our ability to work with delicate objects and structures. 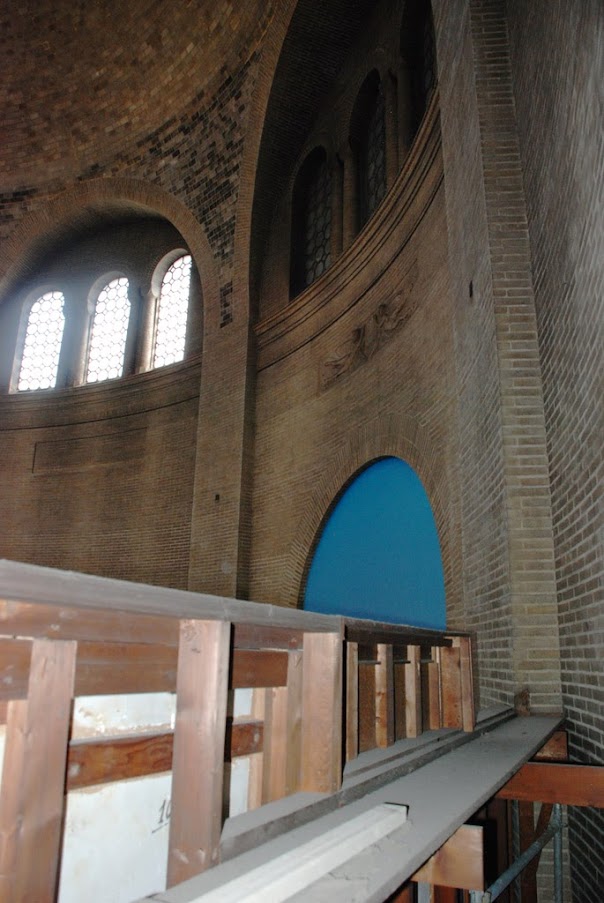 We hope that Penn’s Museum of Archaeology and Anthropology and its vast collection of artifacts are all safe and sound and not affected by the demolition next door.

This is a tremendous Museum and should be seen by everyone in the Philadelphia area.

If you need scaffolding or access around or to a delicate object, situation, or structure, call Superior Scaffold today at (215) 743-2200 and ask for Pat, or visit www.superiorscaffold.com today.  No job is too big or small.

Here are a few additional links including a video news story on the situation.

Conservator Emily Brown documents some of her findings during this move.

A news story from Philly.com.

Channel 6 News story covering the protection of the artifacts.

A great article from Penn Medicine News about moving the murals.

Here are a series of blog posts from the Museum.

Wrong era but you knew I had to do this… Enjoy.