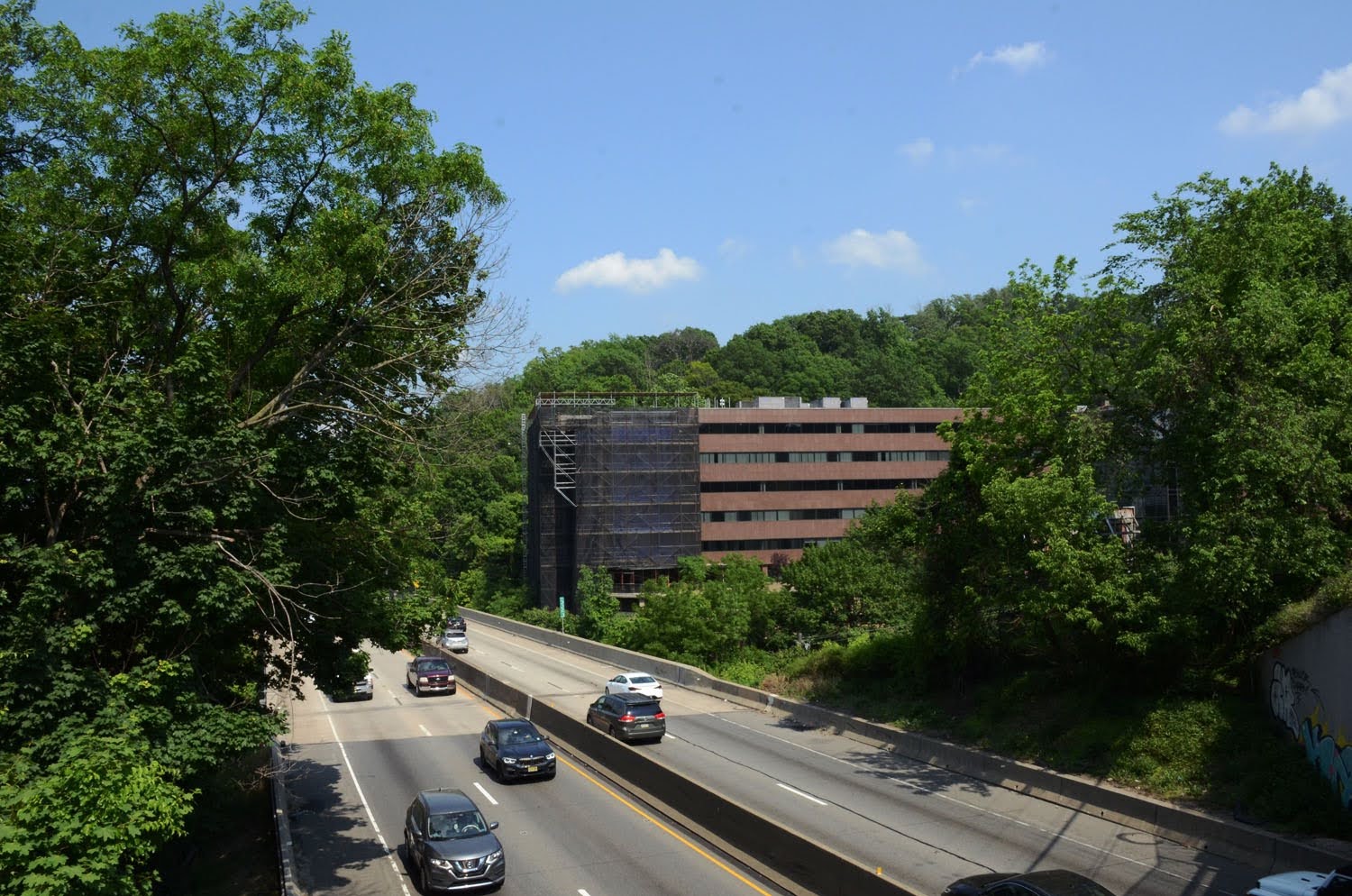 So, you’re sitting on the Schuylkill, just near the Conshohocken exit and what do you see?  Traffic, of course, but what else?  If you glance to the West you’ve probably seen the Four Falls office building shrouded in scaffolding and black netting. 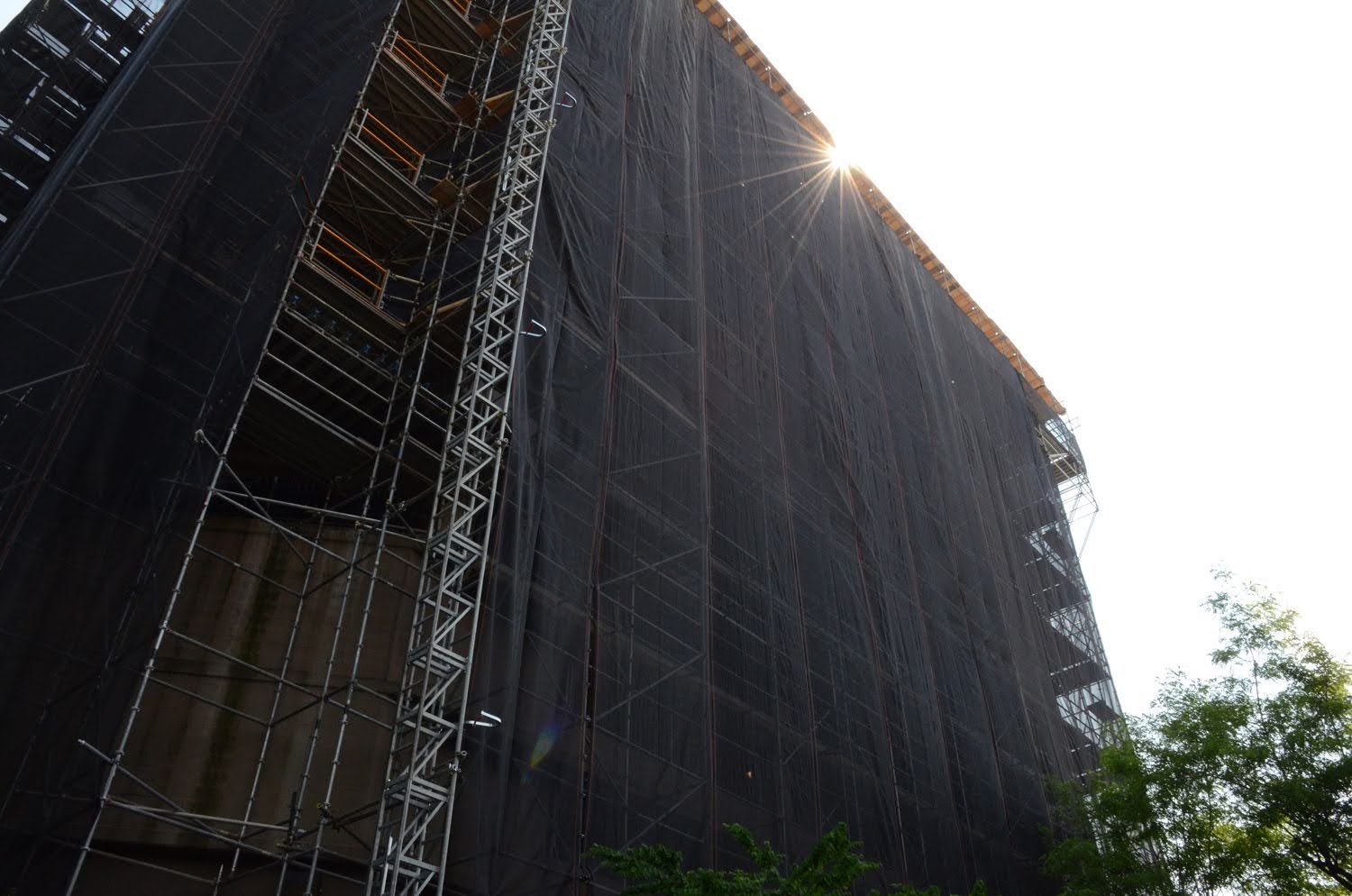 If you took the GBCA Fall Protection Competent Person Training, you’ve been in the building. 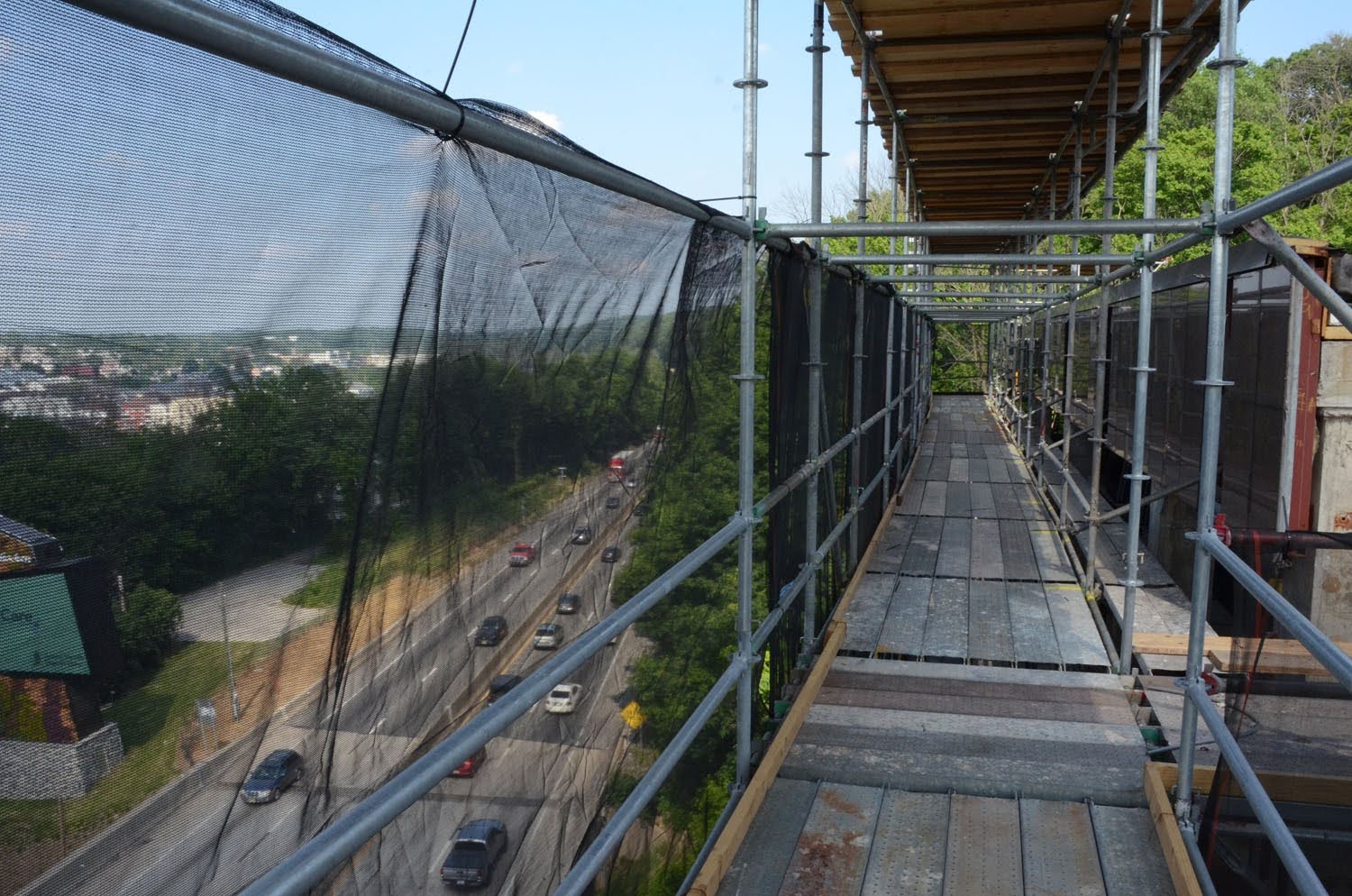 Just a normal day at the office for the Superior scaffold builders, right?  Well, from the highway it sure looks that way but in reality it’s an entirely different story.  One that starts in the bowels of the building and juts out over the stream below. 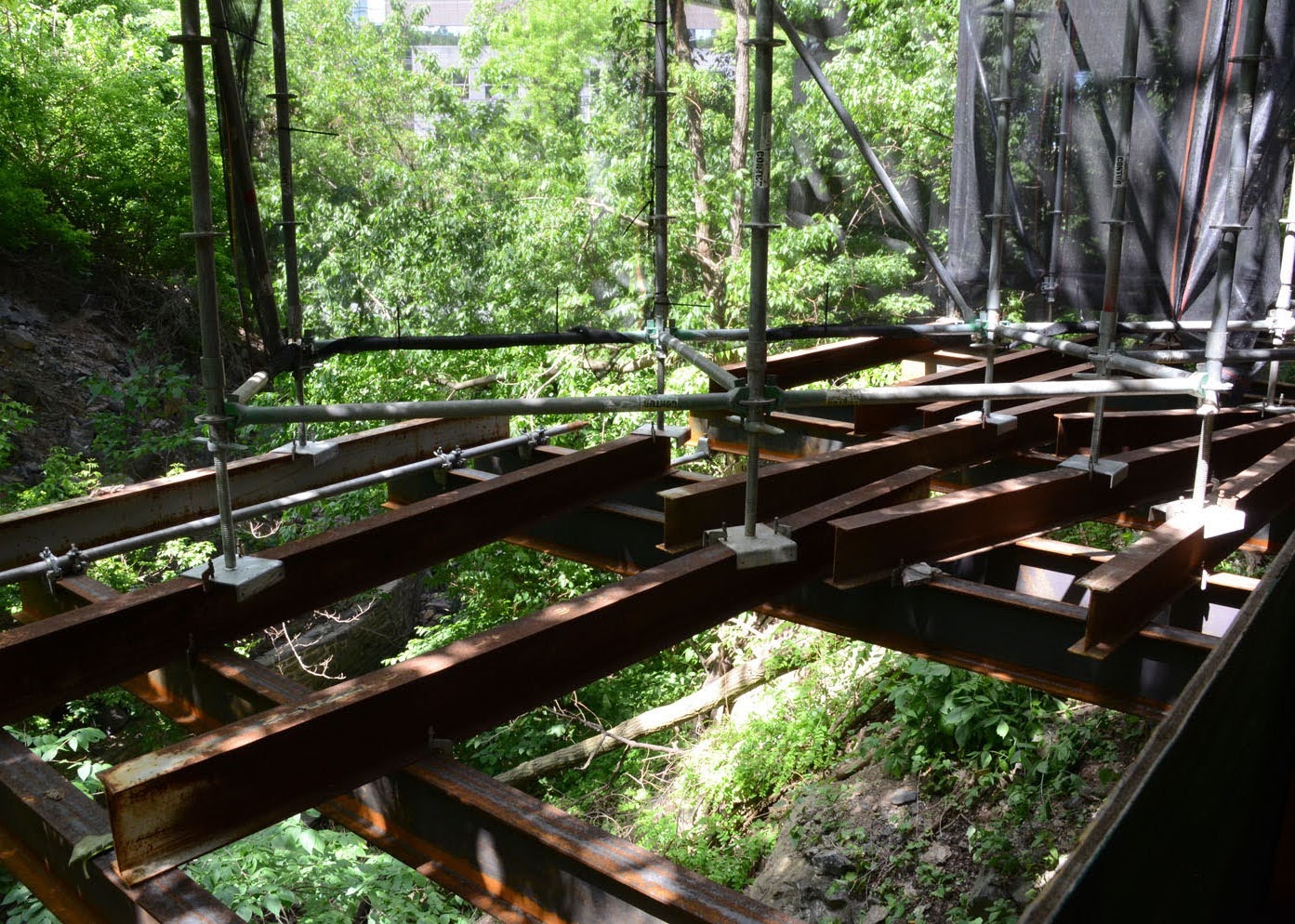 You see, the entire right side of that giant scaffold sits on a cantilever system over the stream, supported by shoring from the parking garage 2 stories under the building.  Imagine the conversation… 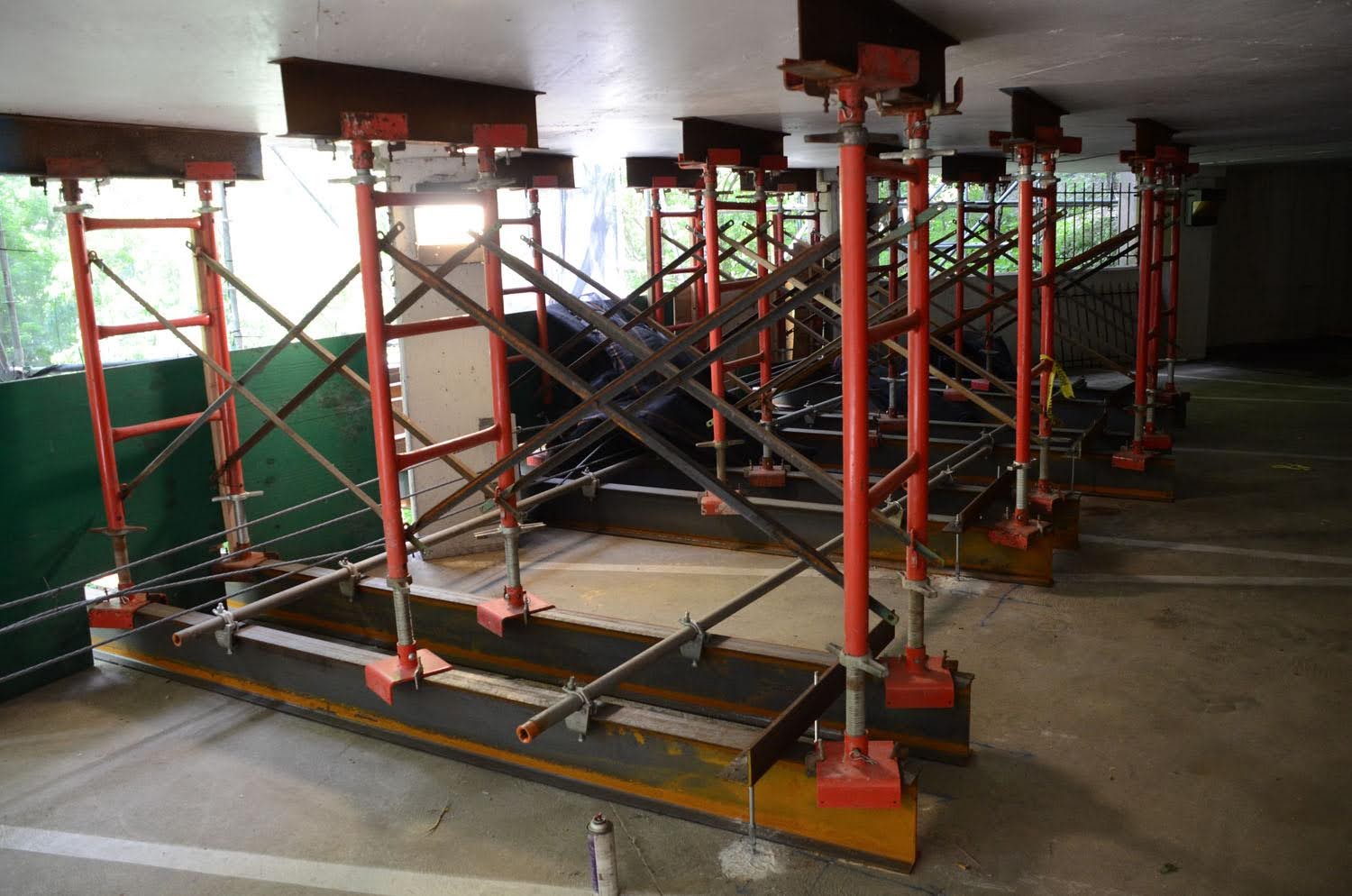 Wait, what?… We have to build a scaffold… starting 2 stories below the ground level AND in order to do so, we have to build a cantilever in the underground garage which protrudes horizontally 20 feet out… 15 feet above a stream? 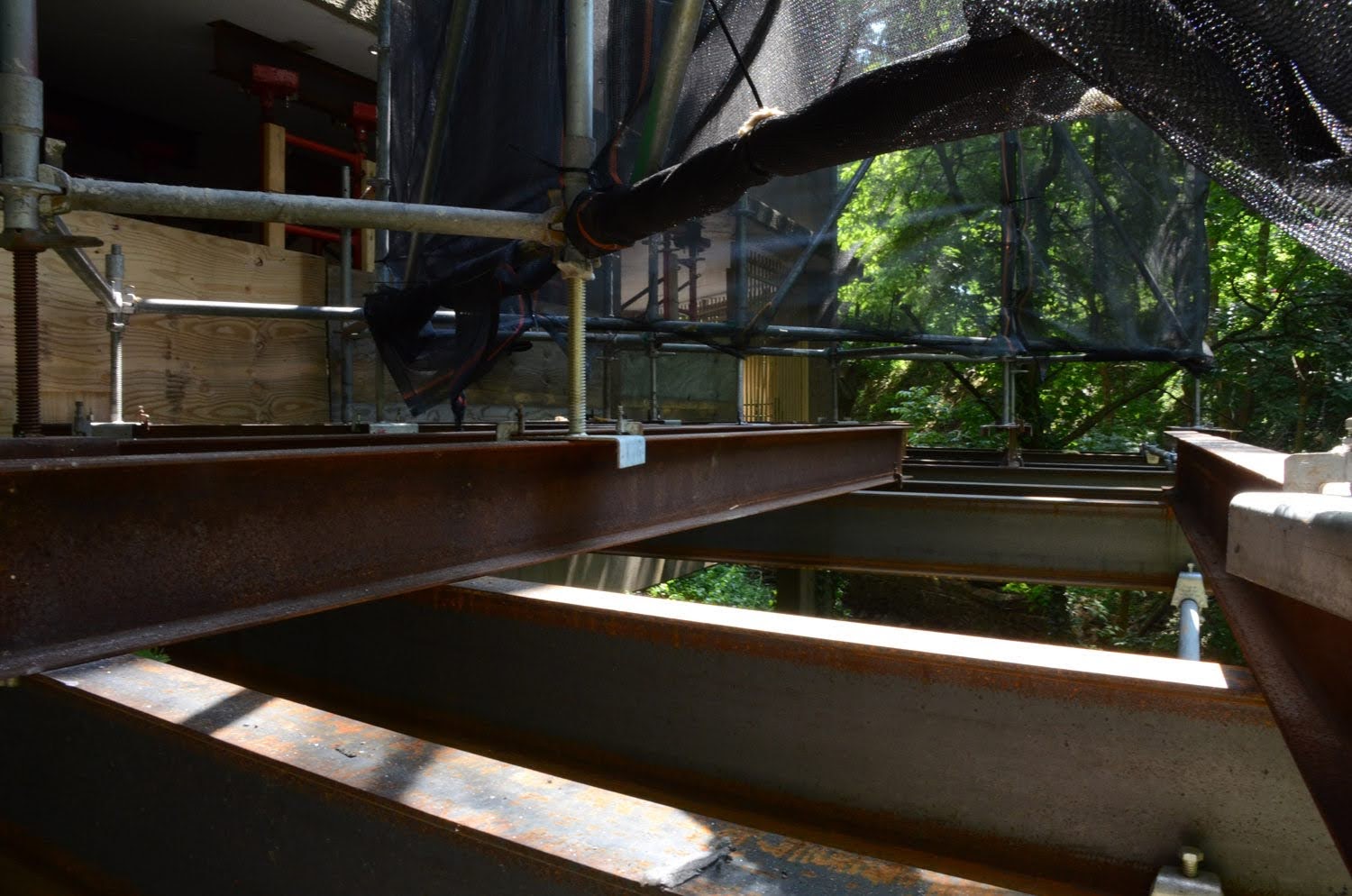 What kind of weird upside-down building are we talking about? 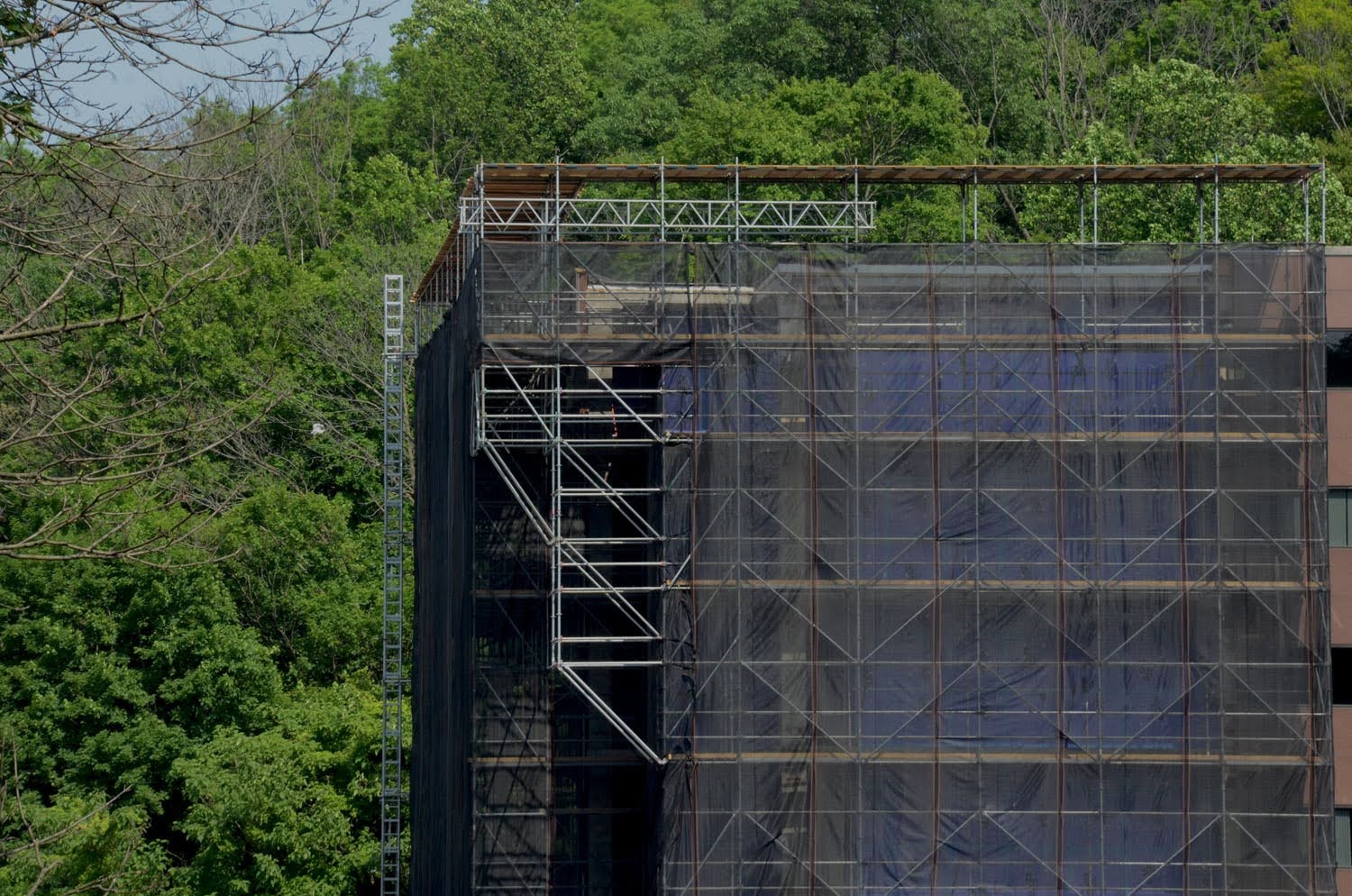 Several years in the design and planning stages, this job was a mighty challenge.  EDIS called Superior Scaffold’s, Tony P, to help orchestrate a working solution to replacing the old, outdated facade with a new illuminated sage glass curtain wall system.  There were many challenges to getting work crews safely to the exterior of the building. 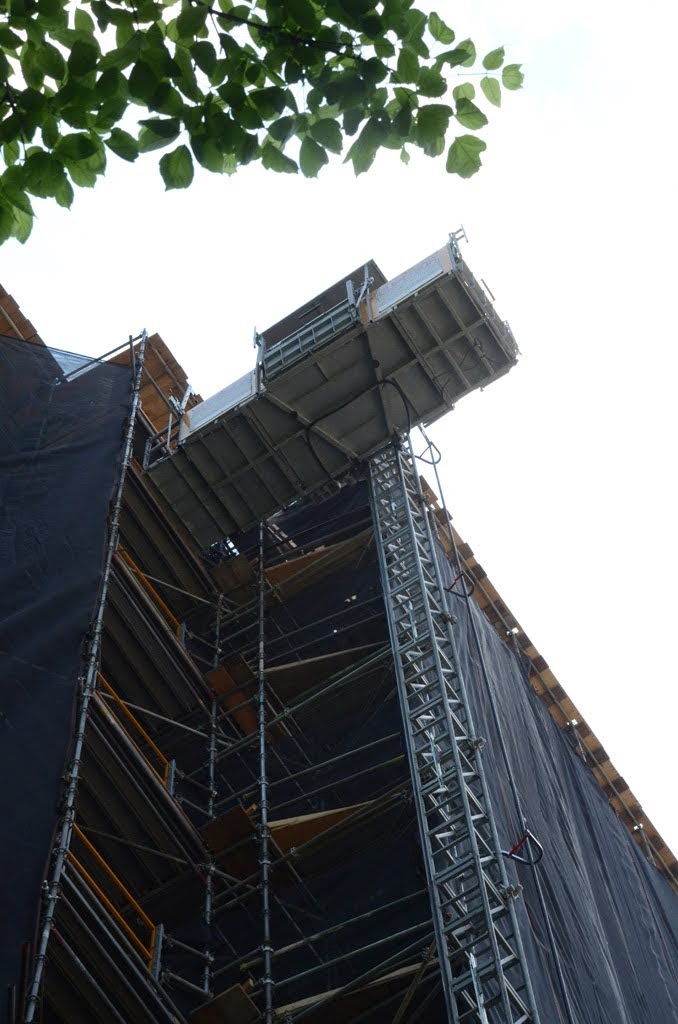 In addition to the cantilever system, they also had to design special tie-in points to anchor the massive scaffold, with transport platforms (personnel/material elevator) attached, to the building so it would not only safely support everything but allow the large pieces of glass curtain-wall to be installed. 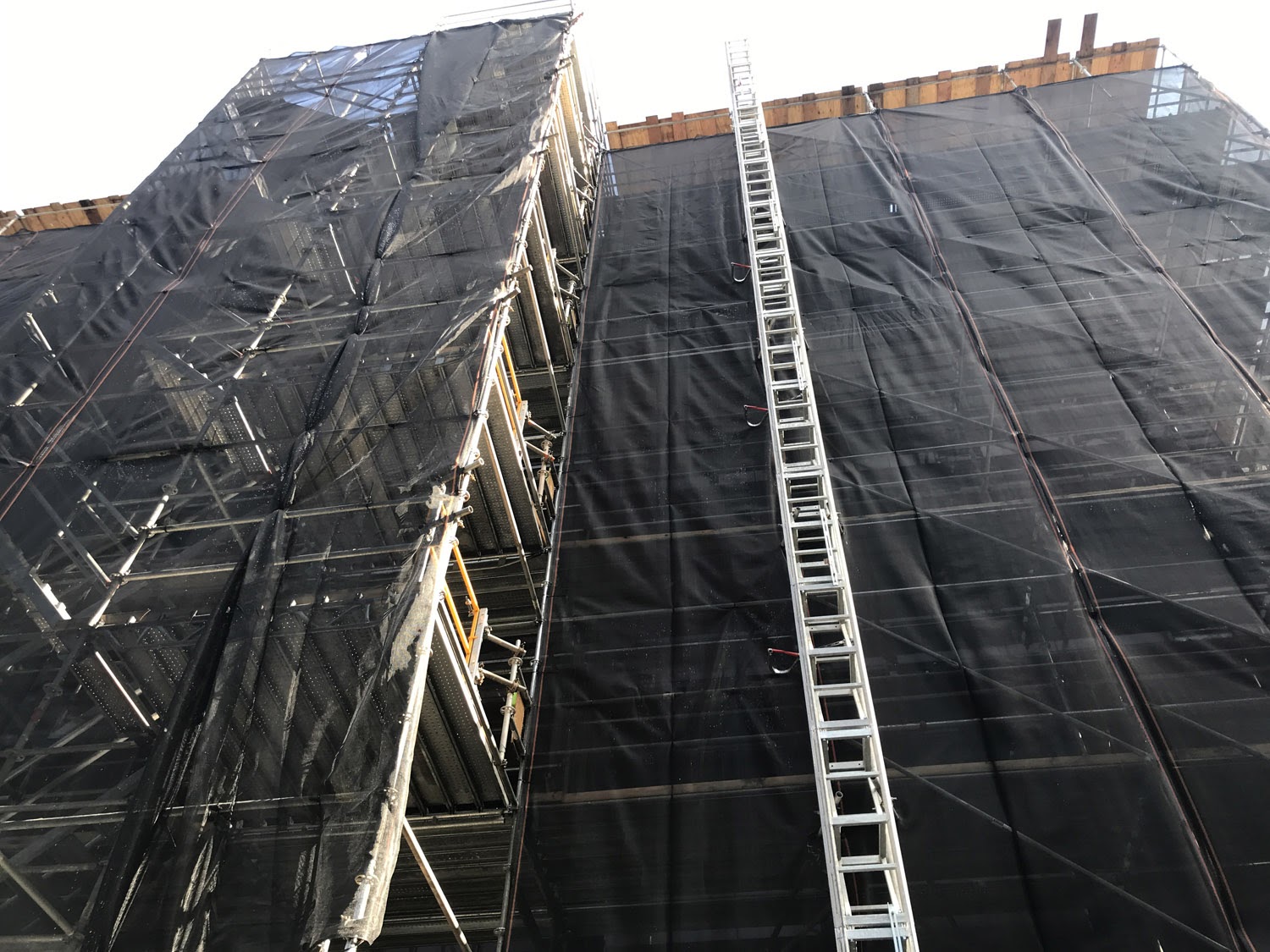 A curtain walls is NON-structural and therefore you can’t anchor a scaffold to it. There was lots of engineering involved from Alternate Design Solutions (ADS) to make this happen. 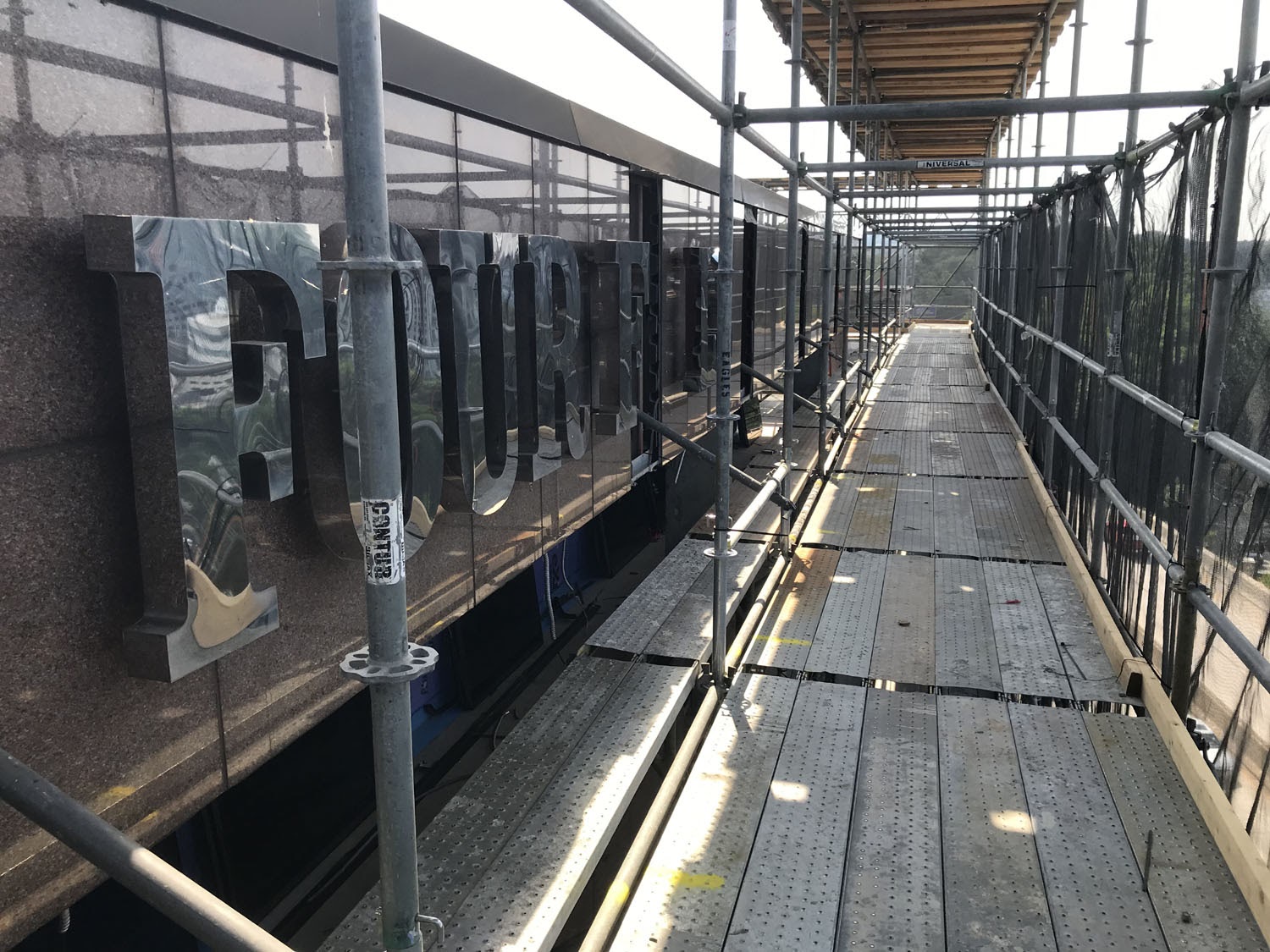 And when you add work platforms, at custom levels, using side brackets placed according the needs of multiple trades to do their work and then enclose the entire scaffold with debris netting to keep objects from falling – you have added another dimension to the safety concerns that had to be factored in. 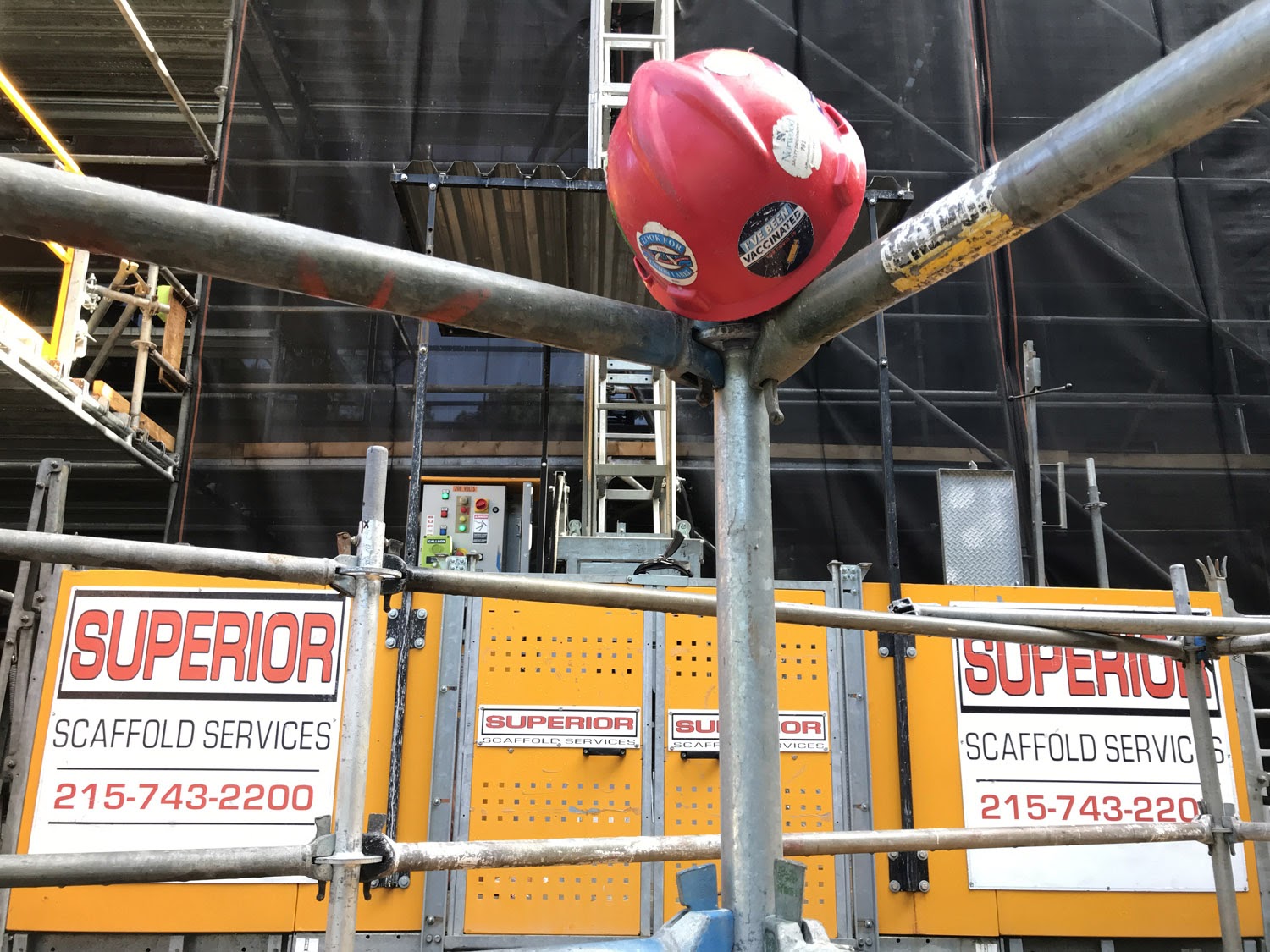 There are scaffolds at both ends, with transport platforms attached.  And if you look at the top of each end there is a custom cantilever section with trusses that was designed to aid restoration crews to construct the new artsy-fartsy diamond shaped roof system thingy that is part of the new facade. 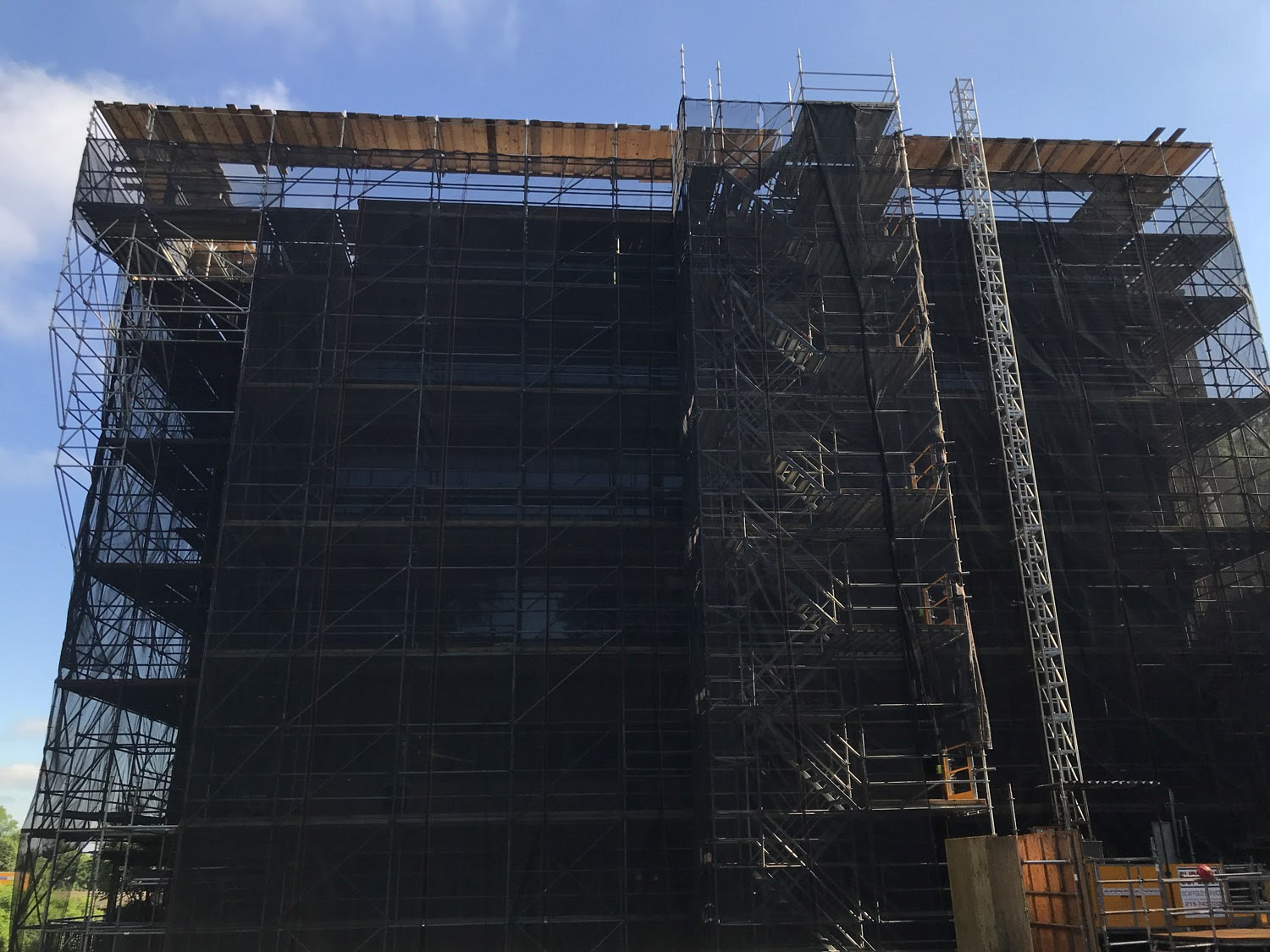 Safety was obviously our greatest concern; both for the erection crews, and ultimately the workers that would be using it. When the building you’re working on was constructed on the side of a cliff the “Fall Protection for Dummies” should not be the go-to reference. 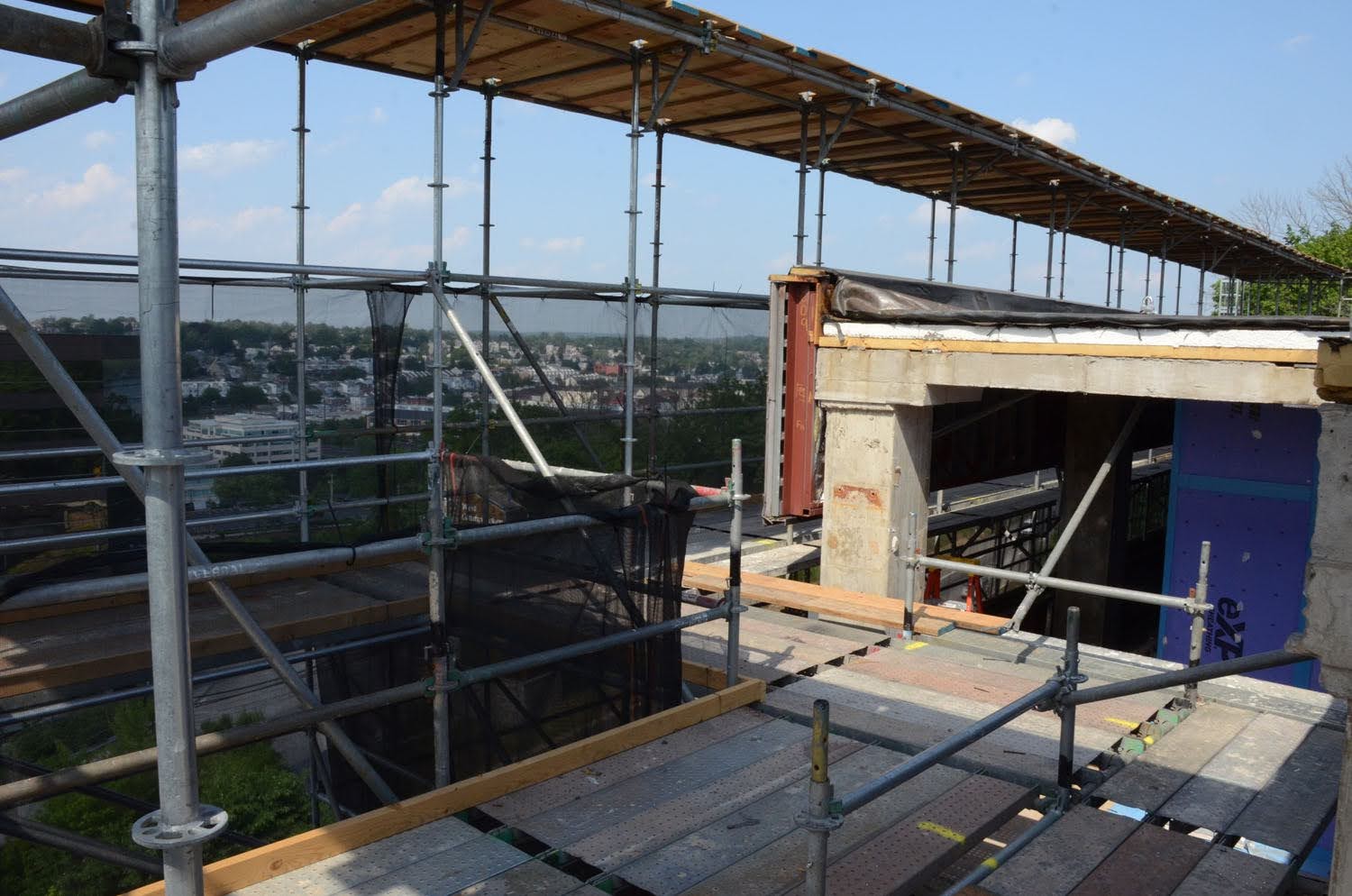 Keeping the workers safe without requiring personal fall arrest equipment (PFAS) meant guardrails on all open sides, netting for falling object protection and safe passage to all work areas, and extension of the work platform in towards the structure to prevent the need for front guardrail or PFAS. 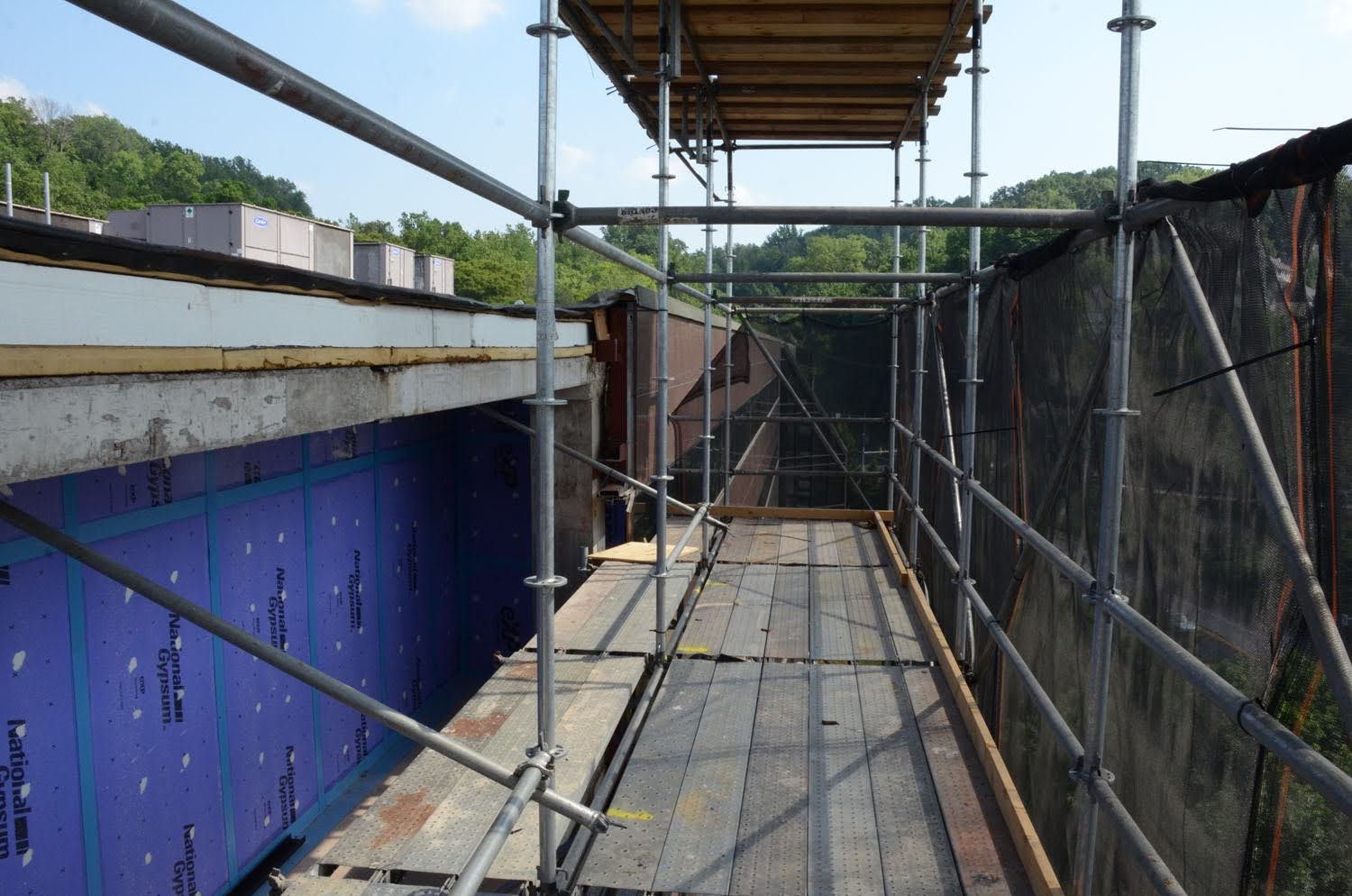 Let’s recap some of the safety elements that went into this build. 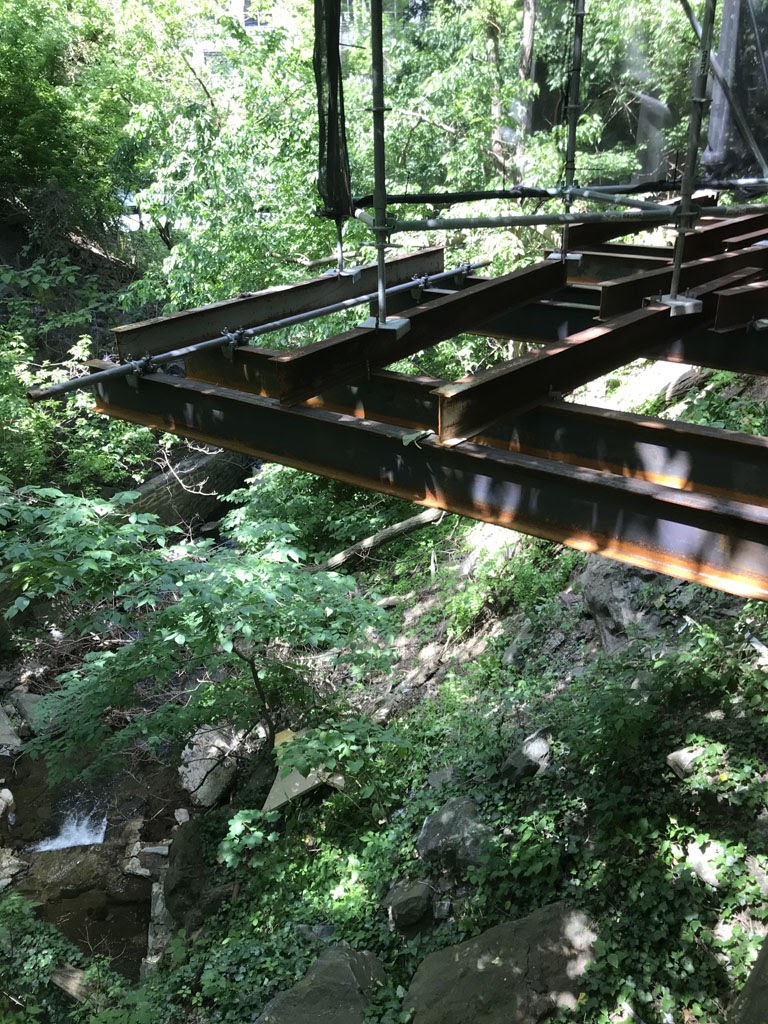 First there was a conception and then engineering from ADS that had to calculate all of the weight on the cantilever system that supports one entire side of the scaffold over the stream fifteen feet below. 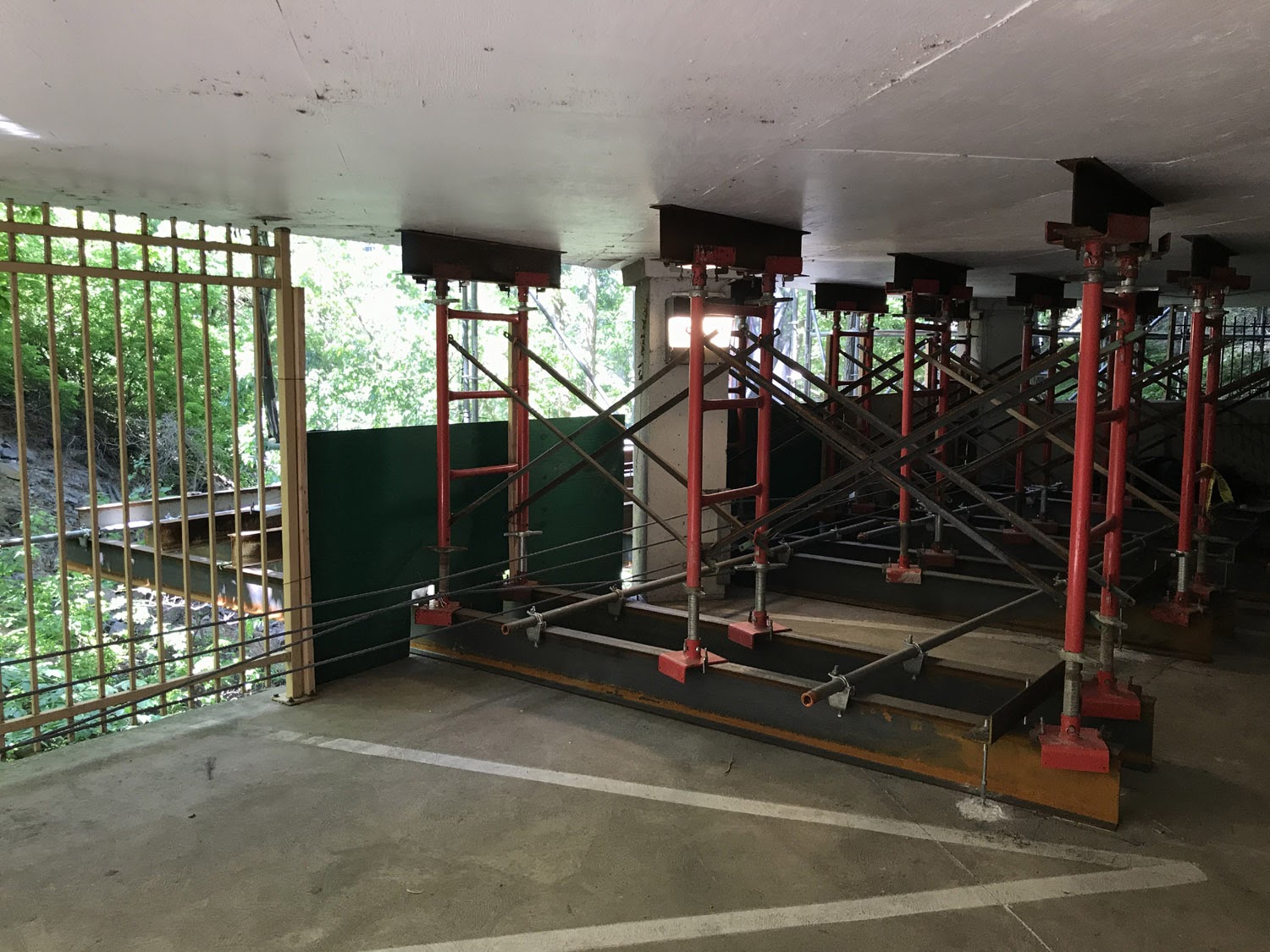 Then there was the shoring to safely support the cantilever in the garage. 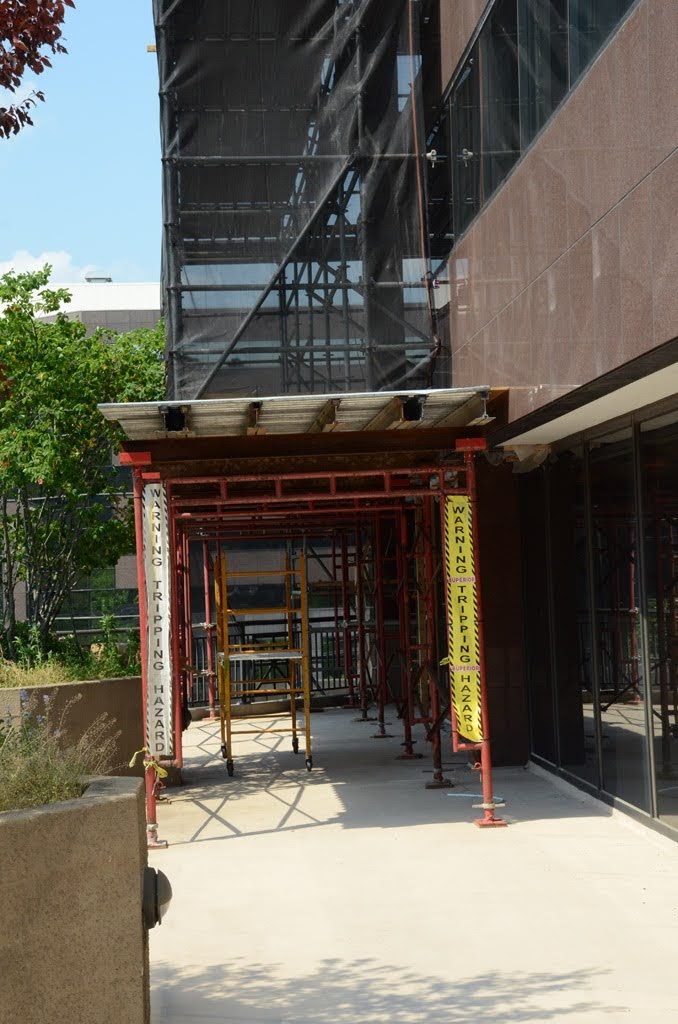 Canopies (overhead protection systems) were installed to provide a safe “tunnel” right through the scaffold so people could get to their offices in the building while work was going on overhead.  Our scaffold erectors used a two-point fall protection system to insure 100% tie-off while erecting this scaffold and the customer was provided a safe, compliant work platform that does not require additional fall arrest equipment. 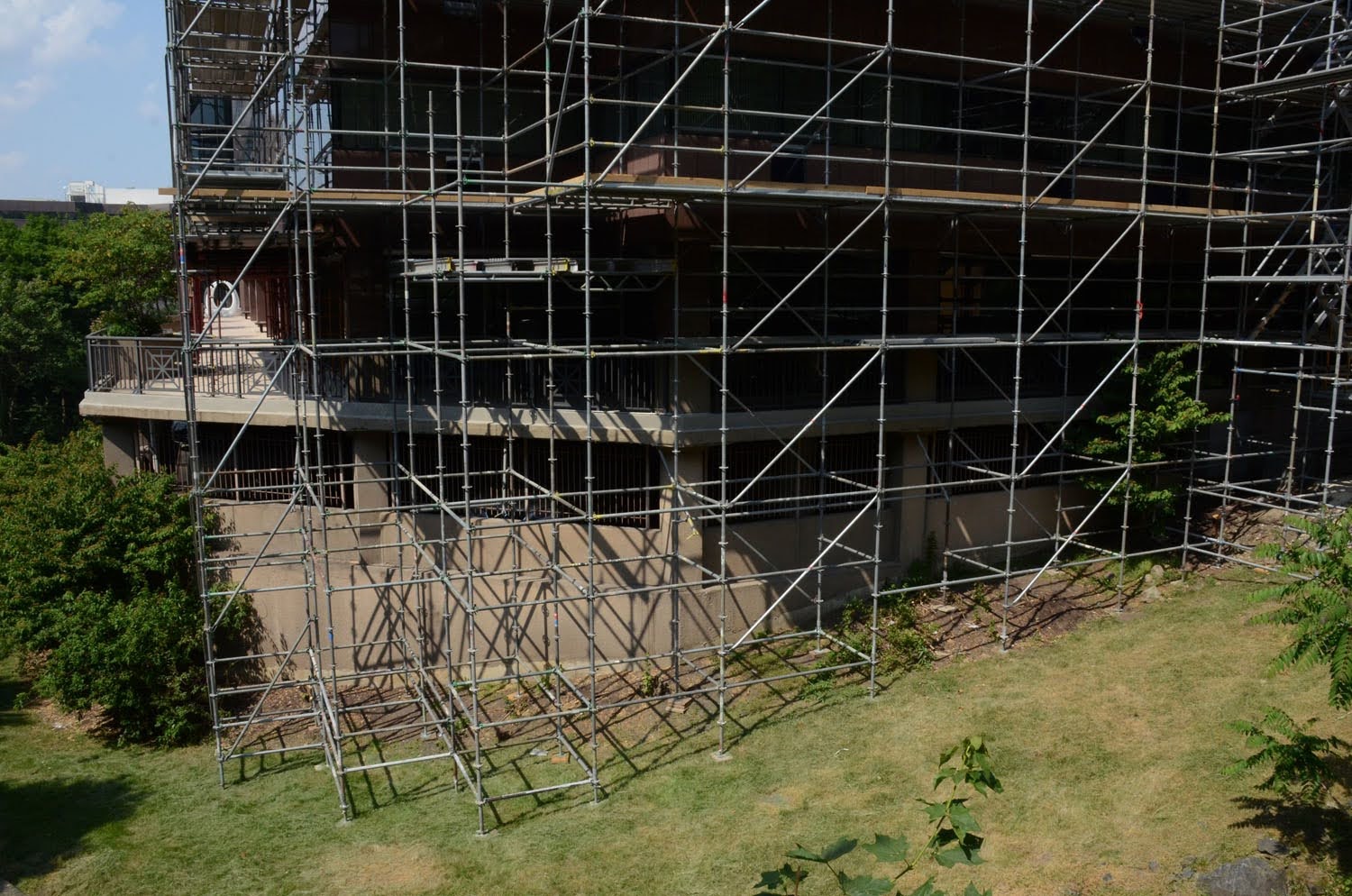 But wait… There’s more! In Phase 2 of this project we will be hanging multiple swing stages (suspended scaffolds) on the building, in the center sections for additional lighting work. 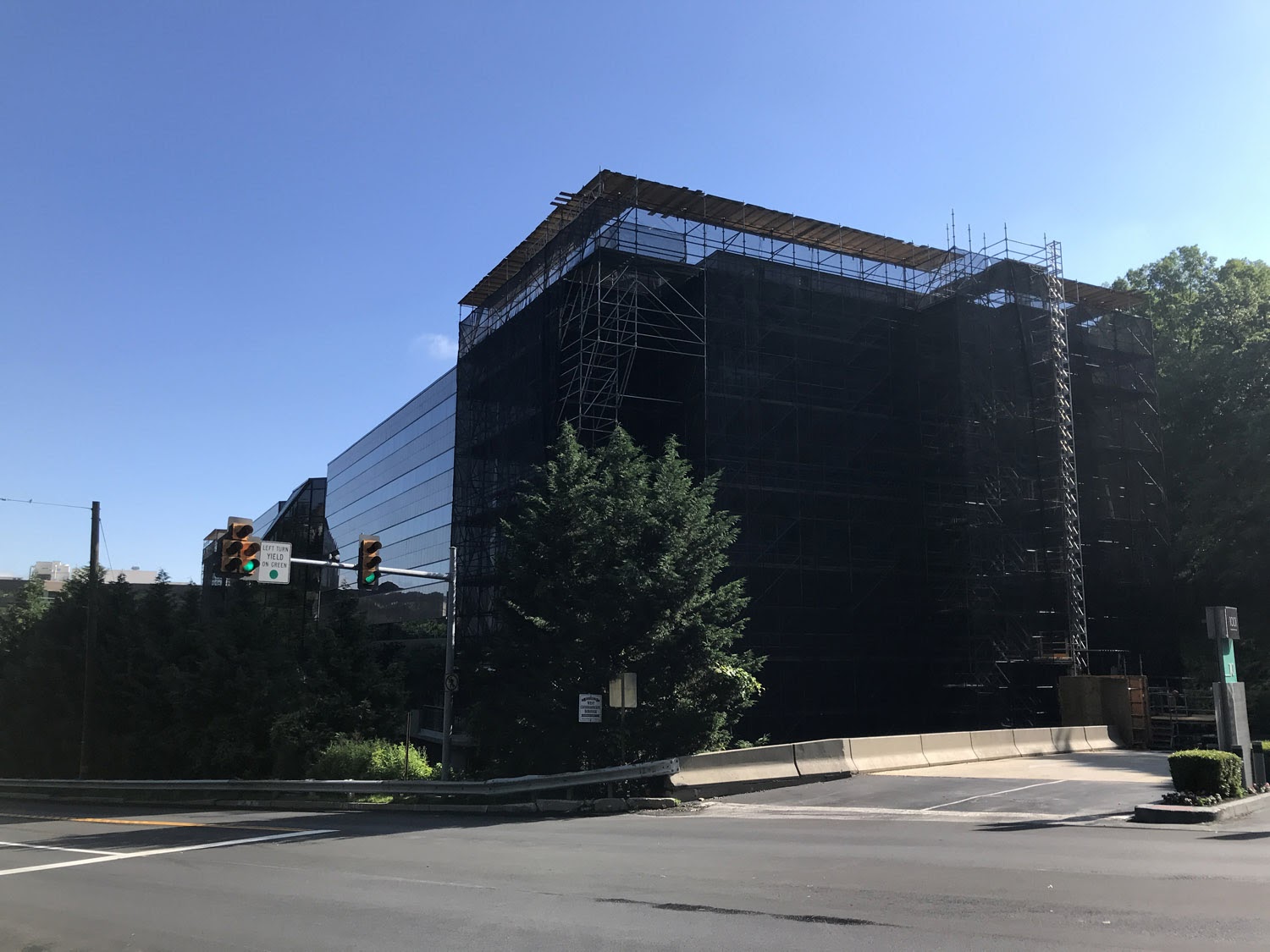 This was quite the engineering and erecting feat and prior planning provided a safe work environment for everyone involved.  And when it’s completed, this building will shine like a diamond on the Schuylkill and give thousands of drivers something to look at each day. 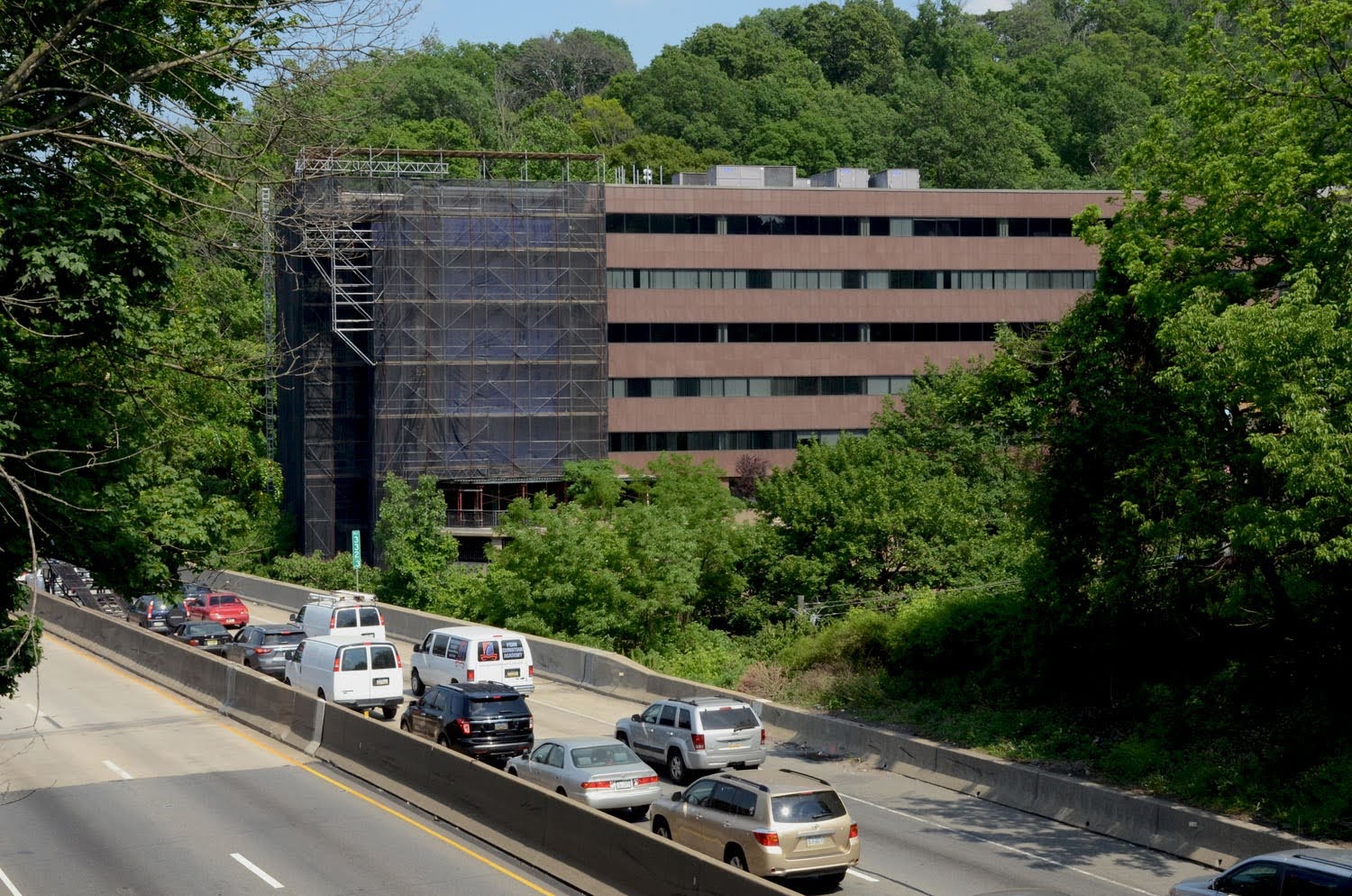 If you need scaffolding, access or a transport platform call Tony P today at (215) 743-2200 and he’ll take care of you.  Or visit www.superiorscaffold.com today for more jobs and info.

Today’s musical selection comes from mind of the honorary mayor of Wilmington.  Enjoy.