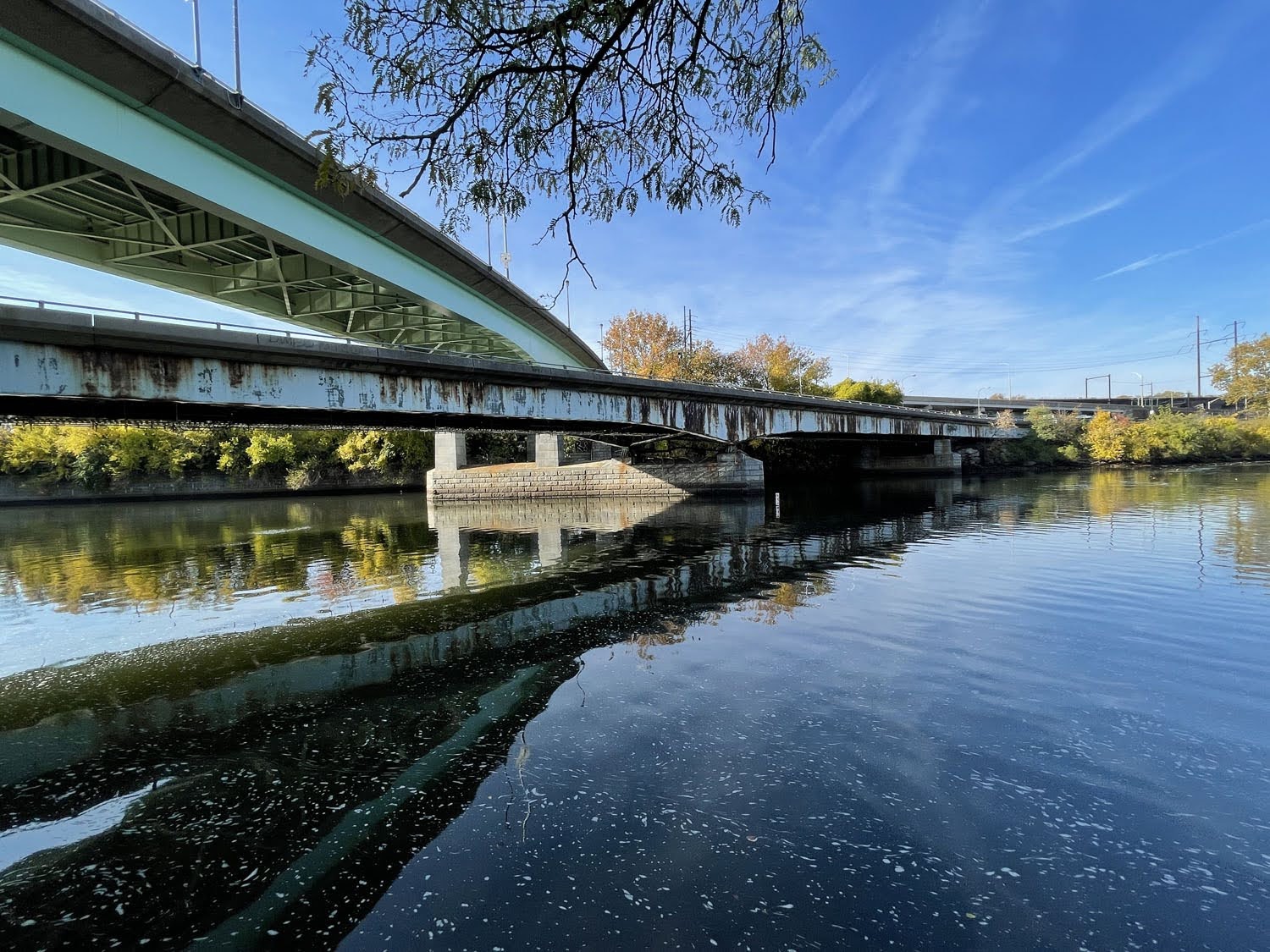 Here is a really cool and really long hanging bridge scaffold job on the Spring Garden Street bridge in Philadelphia, PA.  It’s a 690 foot-long highway bridge that crosses the Schuylkill river below Fairmont Dam.  It connects West Philadelphia to the Philadelphia Museum of art and Benjamin Franklin Parkway.  It is the fourth bridge at this location. 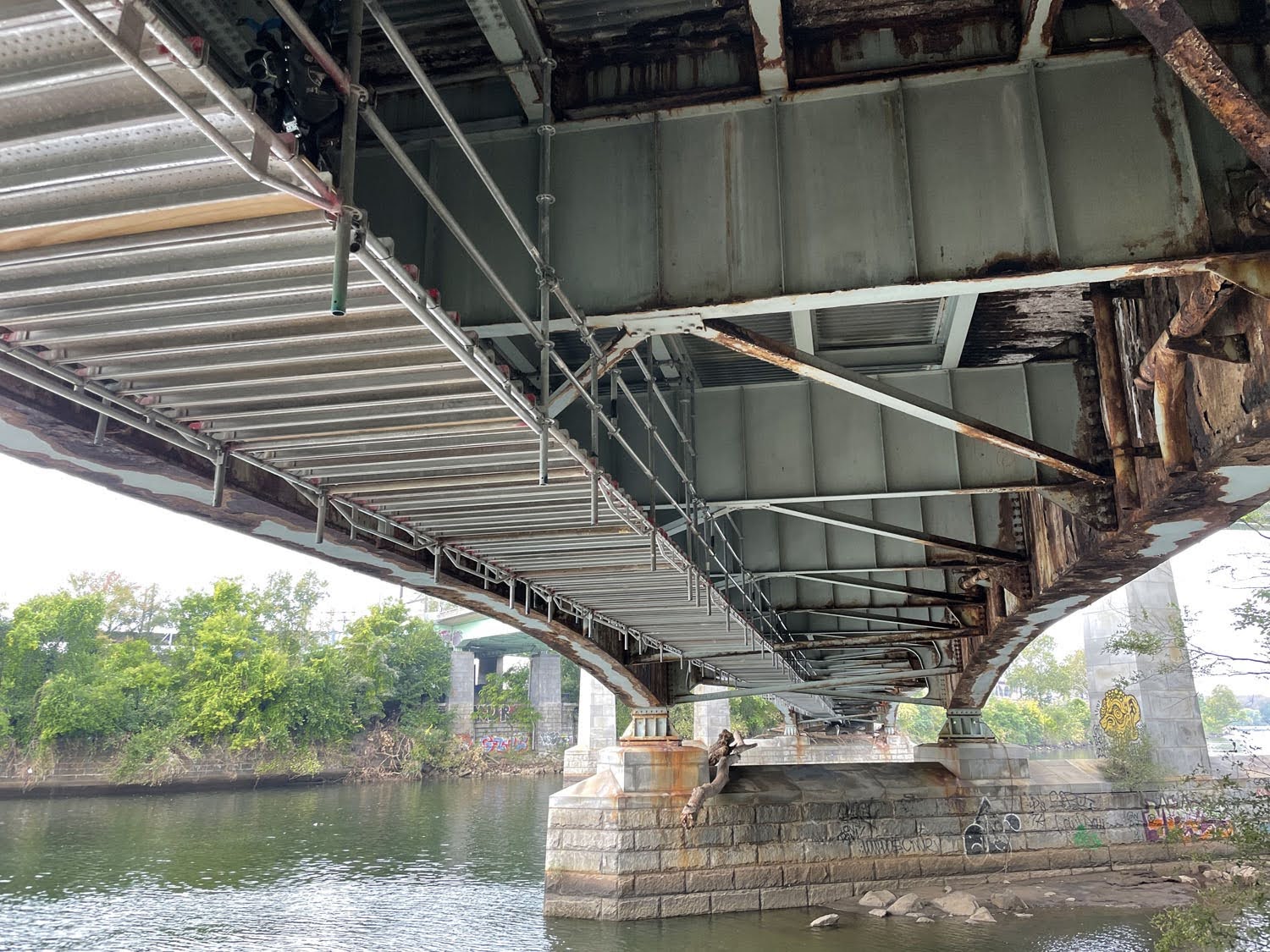 I’m going to put a link to the history of the bridge because it’s fascinating how many different structures have been built there since 1812. 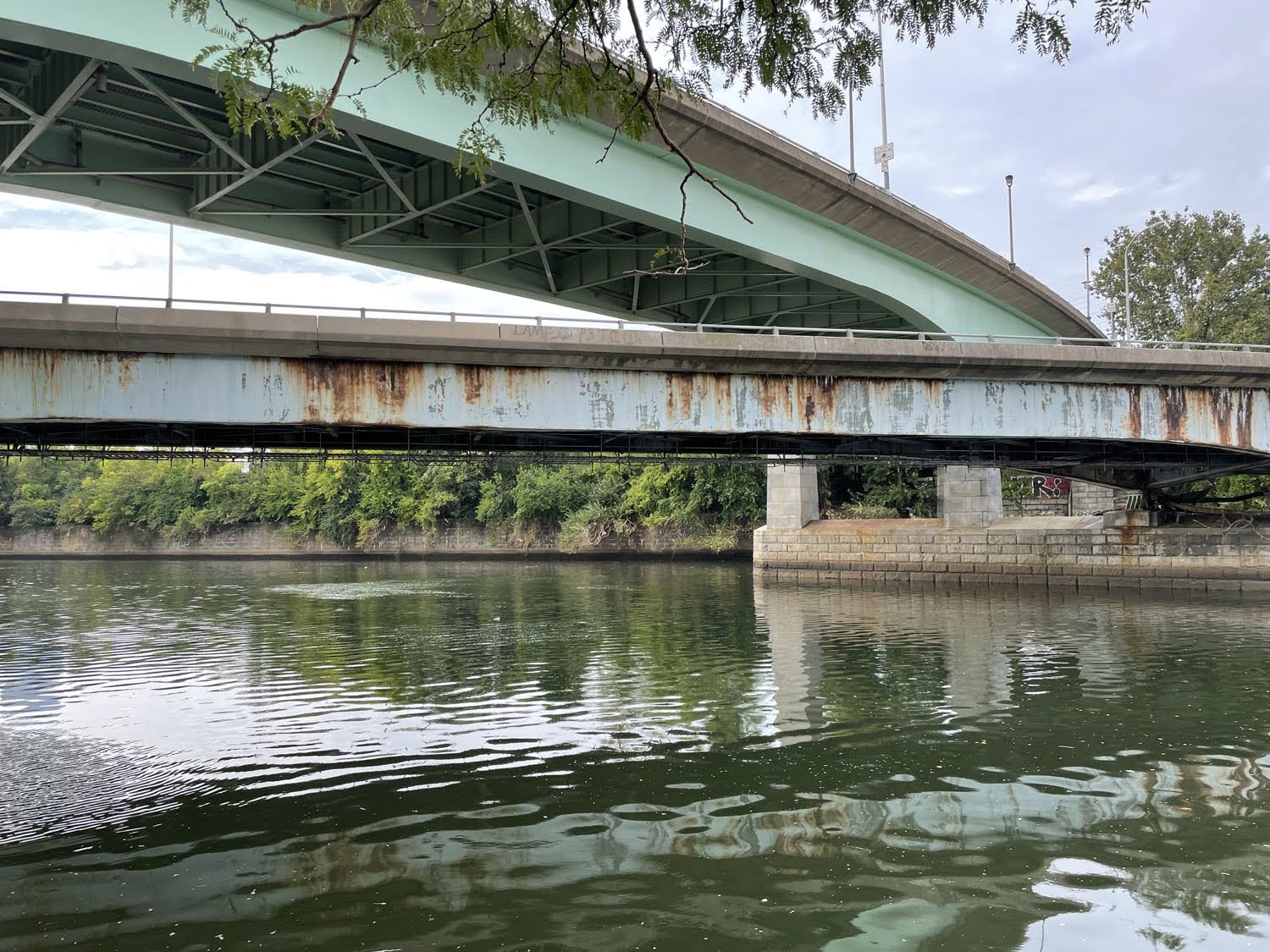 The Spring Garden Street Bridge and its sister bridge, The Martin Luther King Jr. Drive Bridge, opened in 1966 to great acclaim. The pair of steel box-girder bridges were presented with an award of merit by AISC for their design the following year. 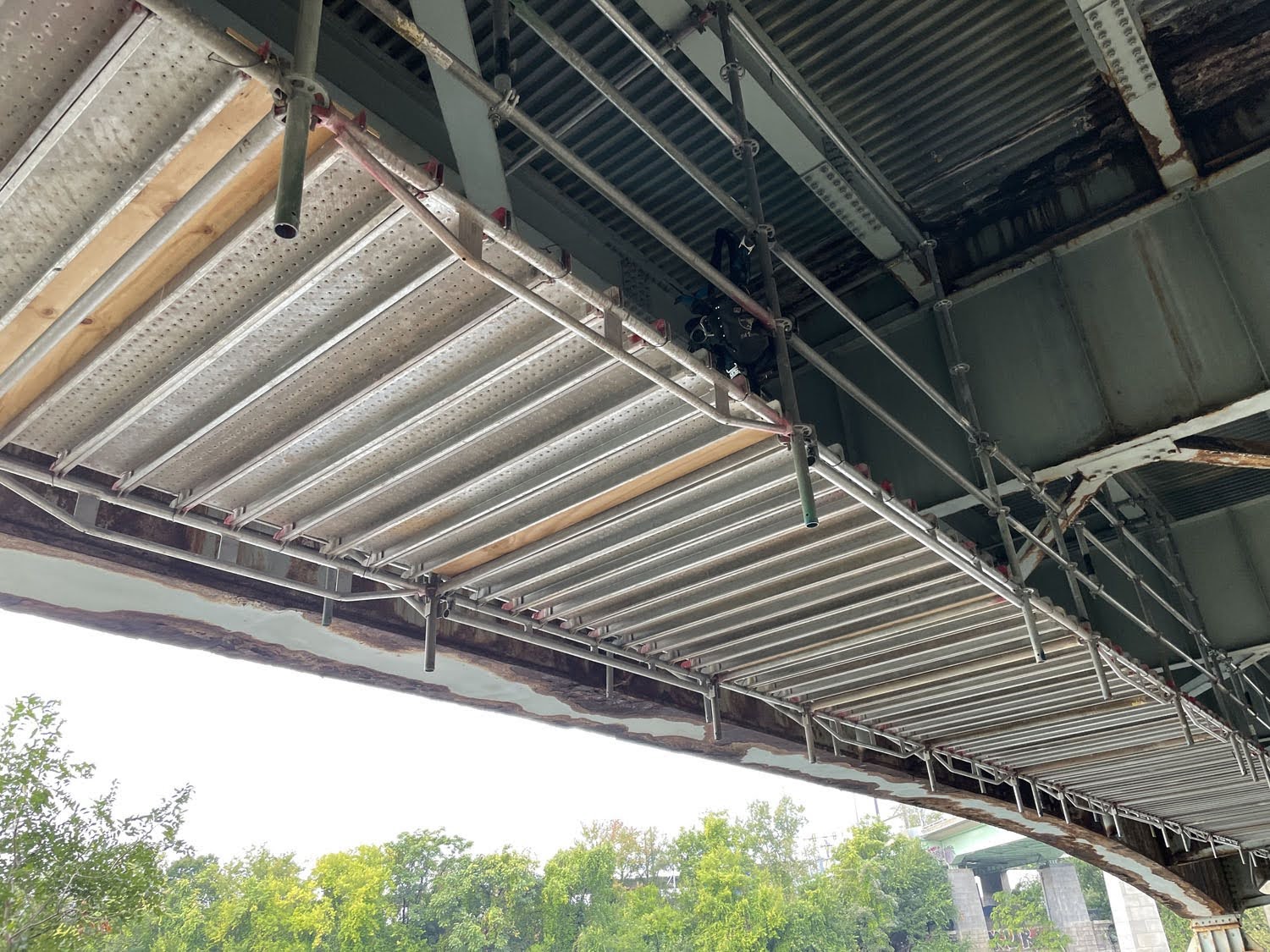 Superior Scaffold was called out to provide a work deck solution to get crews up under the far reaching areas of the structure for asbestos abatement and removal of old rusted electrical conduit, so new fiberglass conduit could be installed. 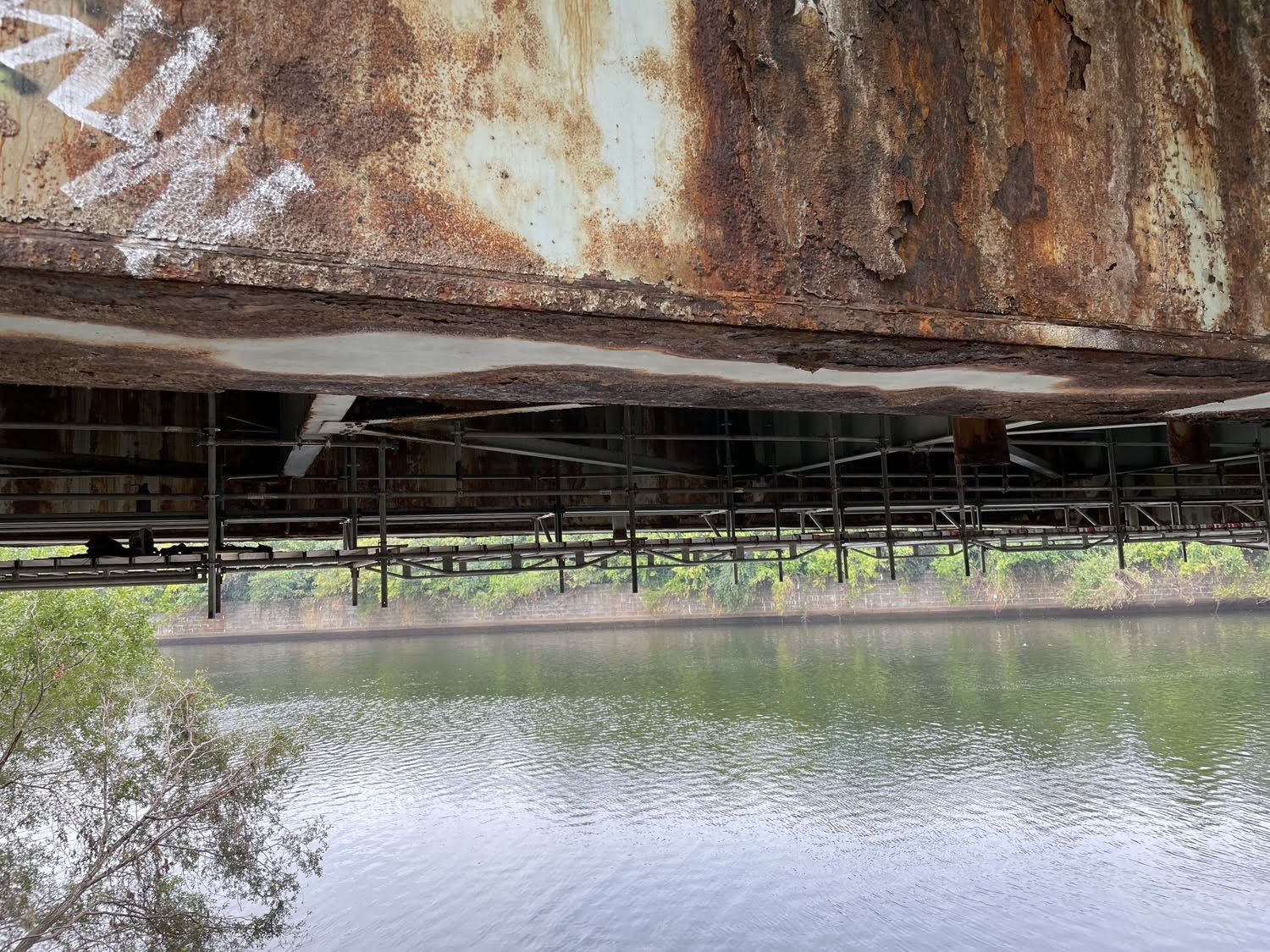 This was no easy feat.  Superior had to jump through many hoops to make this job happen. 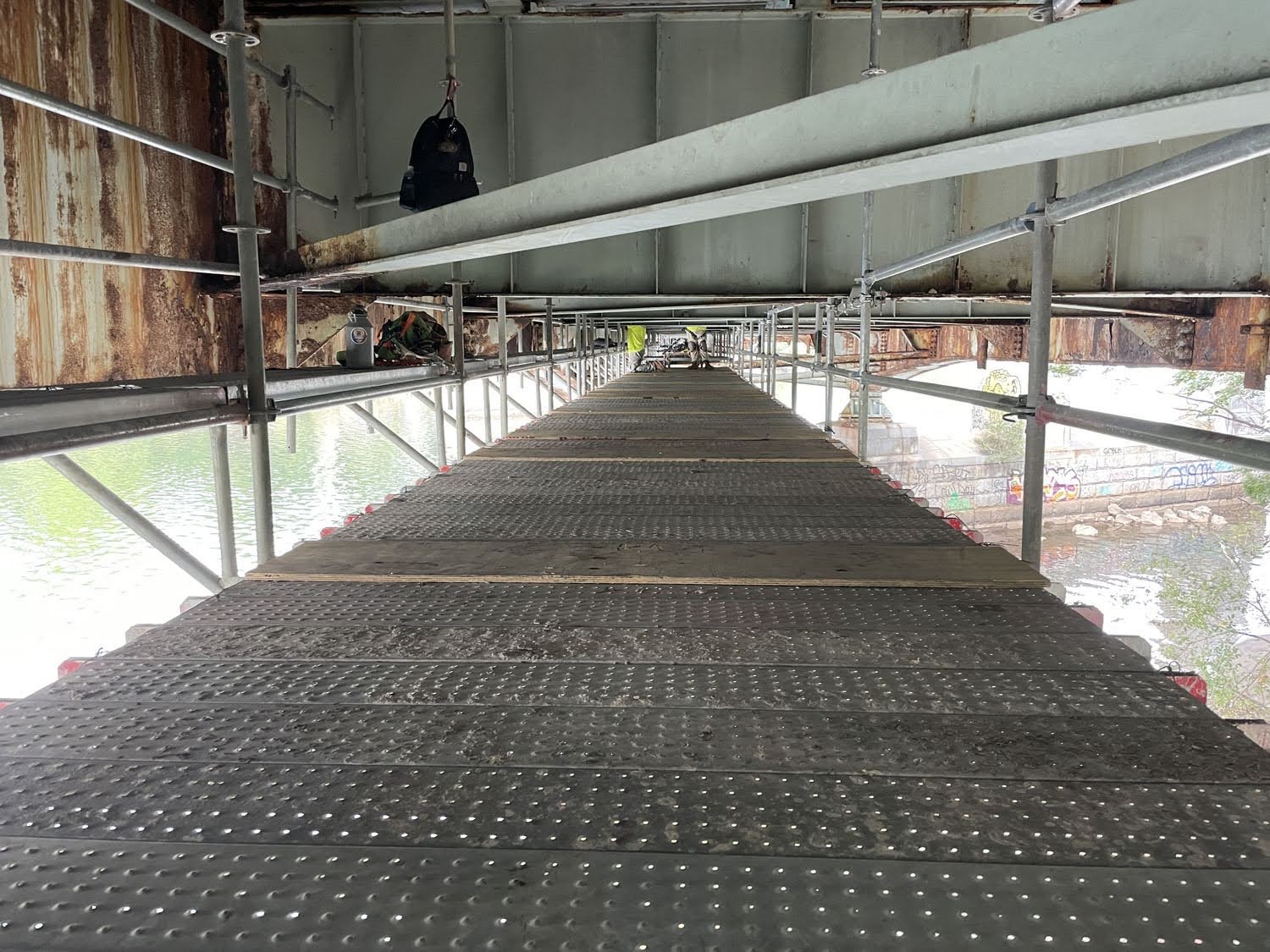 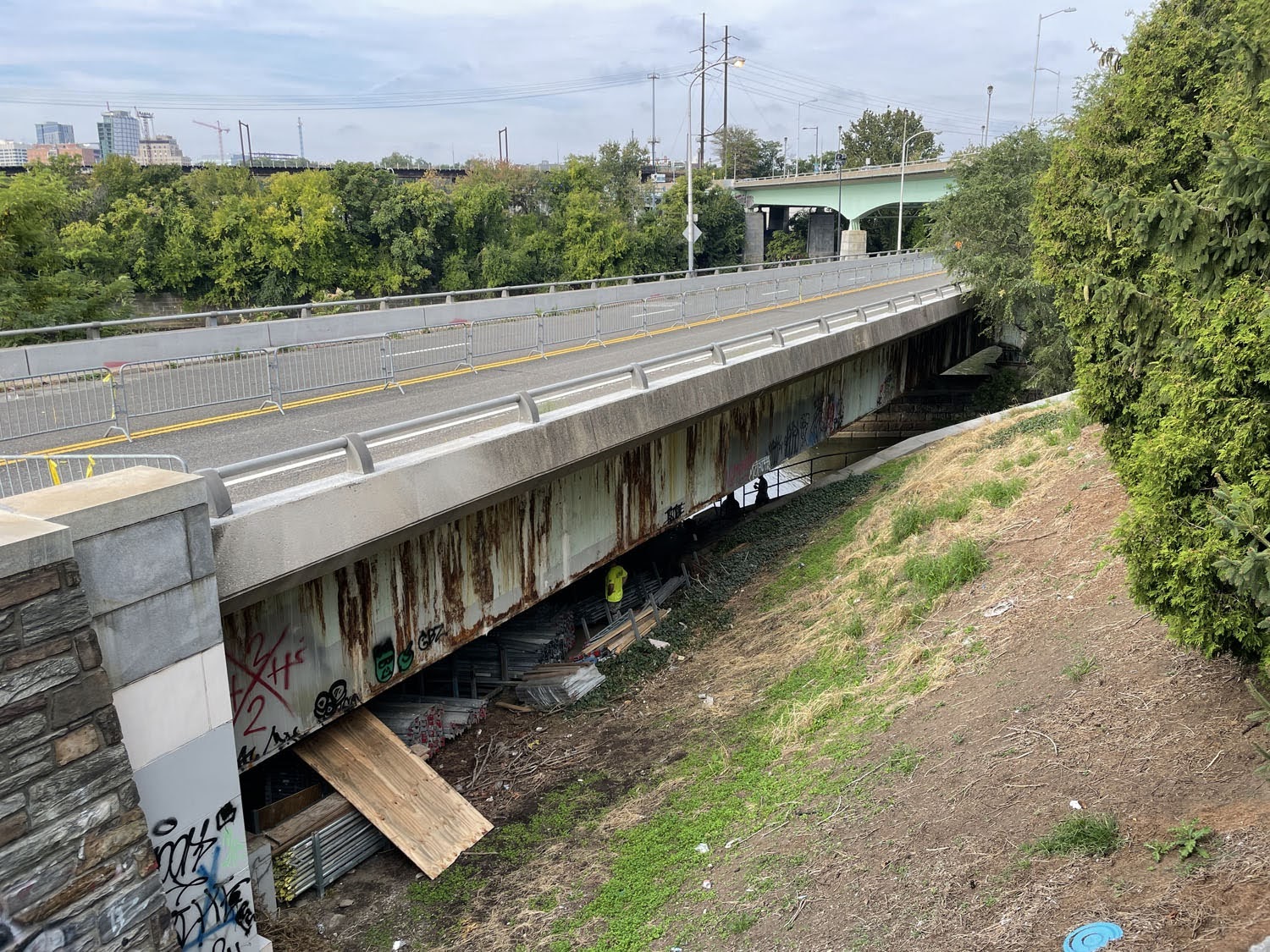 Then we had to work with the City on getting approval from their bridge division just to work on the bridge and then another division to make a lay-down area or staging area for our scaffolding.  All to get crews beneath the bridge to work on the electrical conduits.  I think this all might be part of the city’s MLK Bridge Rehabilitation project that sets out to upgrade and modernize the sister bridges.  Don’t hold me to it but I assume that they are both part of the same project. 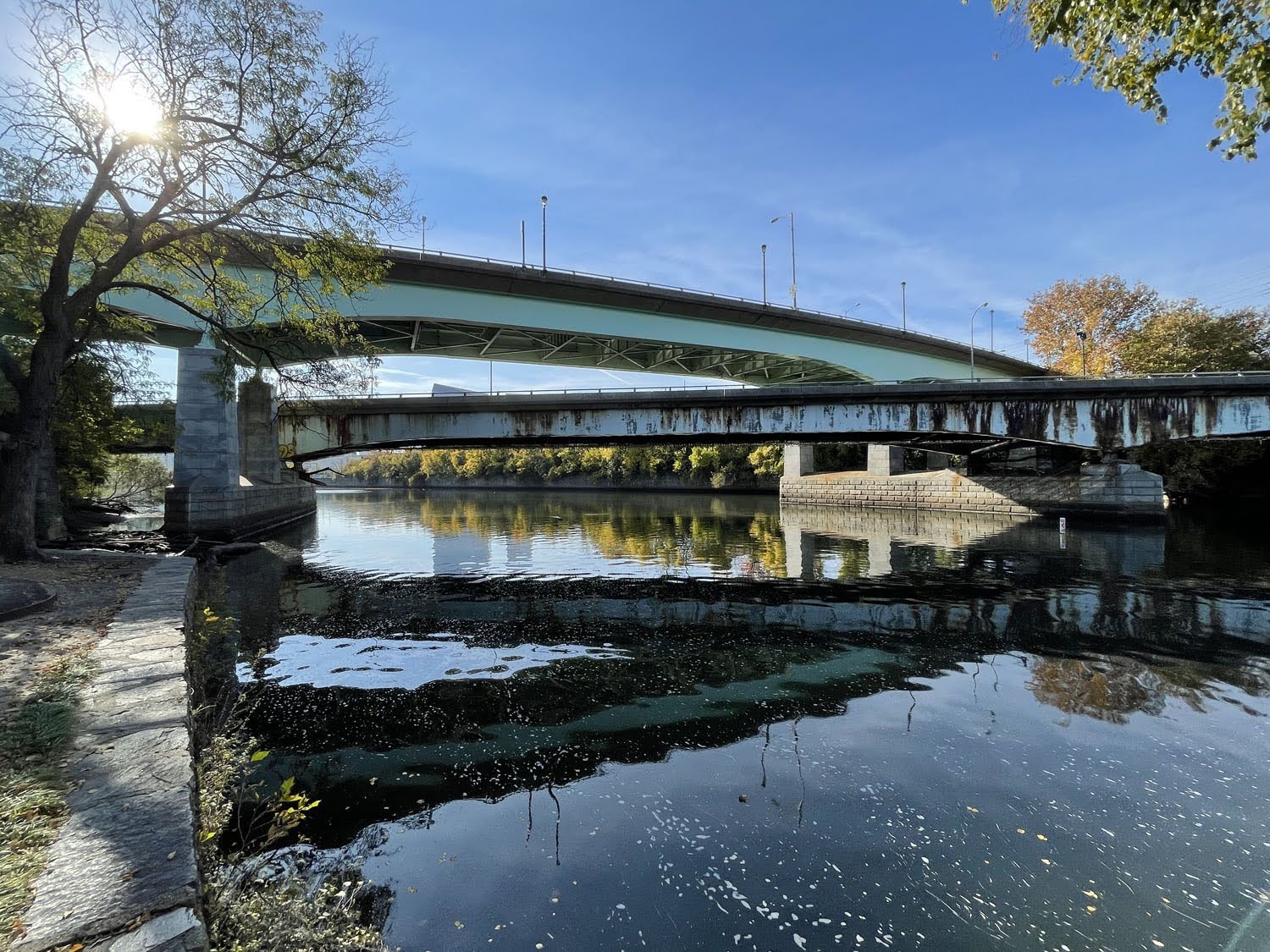 Either way, we started by doing what we call a hanging bridge platform which allows us to hang and attach our system scaffold to the existing steel structure beneath the bridge.  (We span the abutments and hang from the structural steel already there.)  We then assembled a 7’ wide work deck onto that scaffolding so crews could travel to the specific areas to do their work. 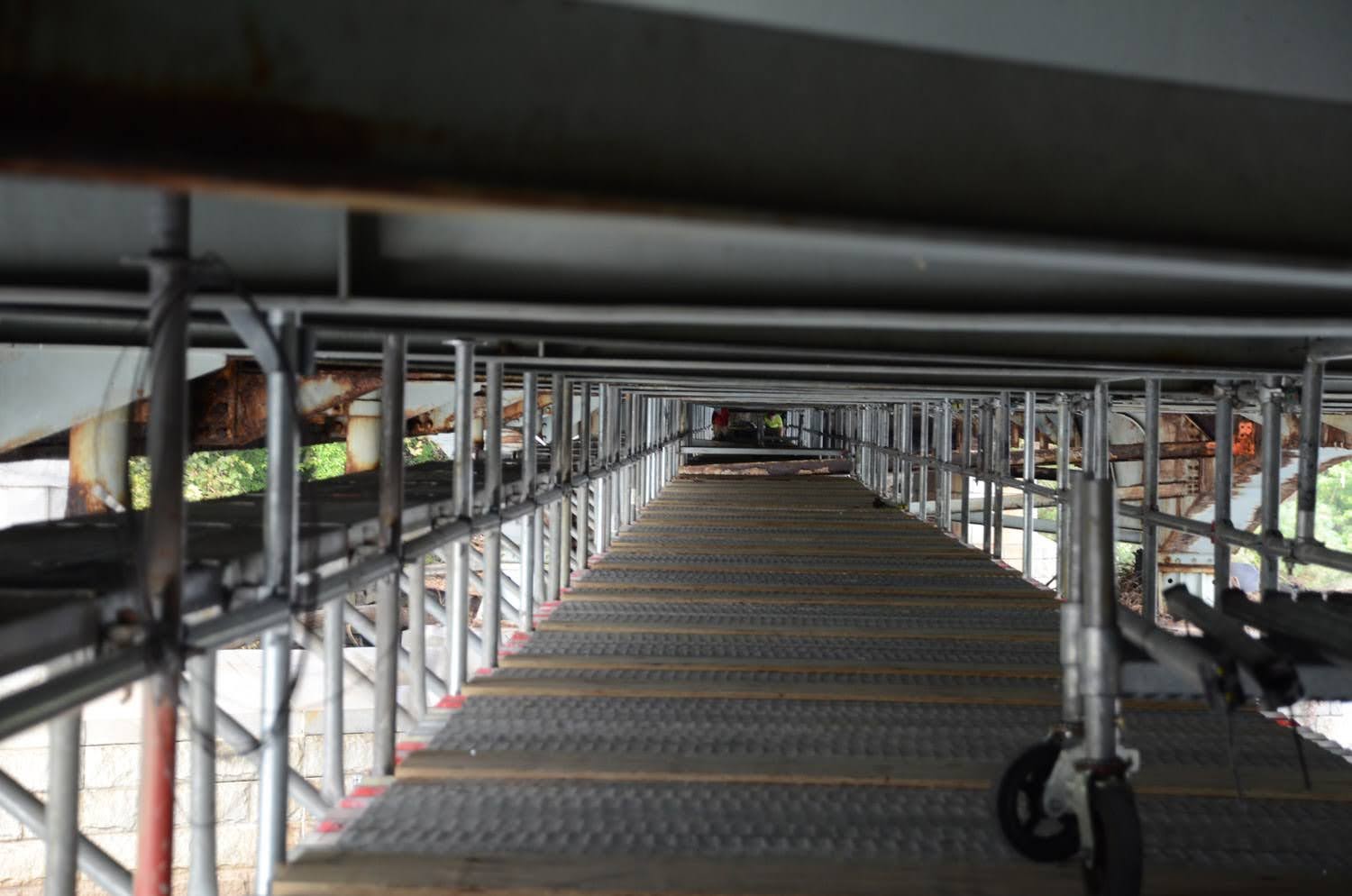 You can see from the photos that our crew had to literally assemble this from one side to the other, of the 690 foot-long bridge, while working on their hands and knees.  Ouch.  A shout out to our scaffold erectors. 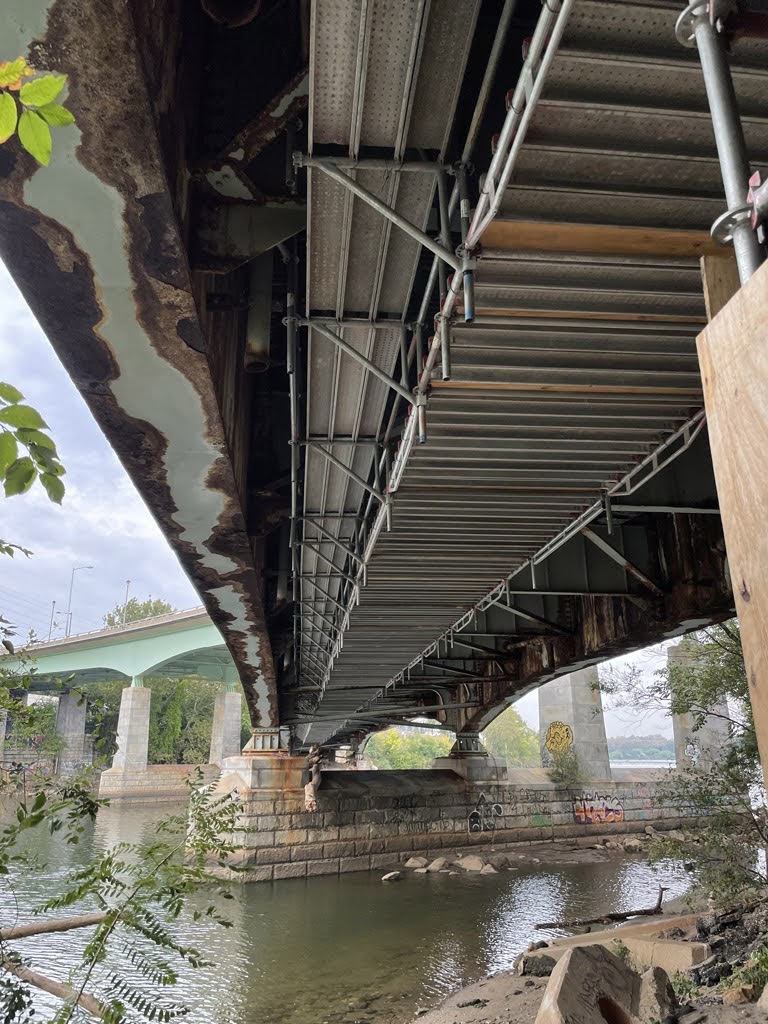 We then added 3’ outriggers to the side of the work/walk deck all the way down the line and then decked them in.  That’s really where the crew guys will be standing doing most of their work removing the old rusted conduit and replacing it with brand new fiberglass conduit to run electrical wires.  (see the photo). 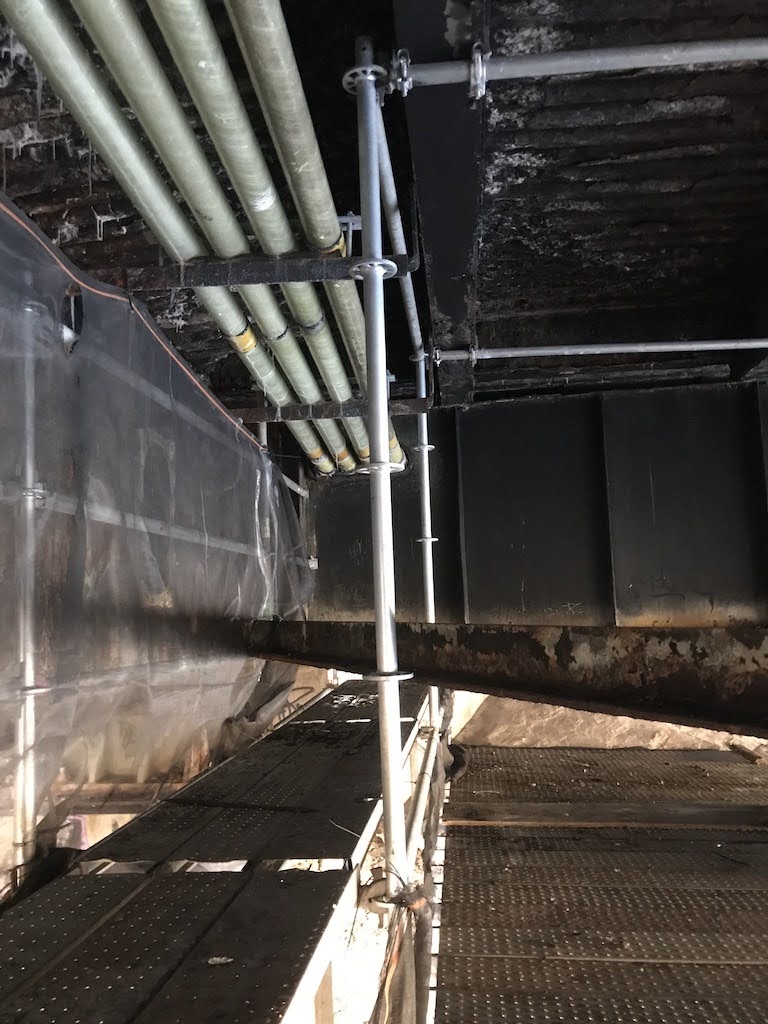 Once the system scaffold was in place and the aluminum work deck was attached, our guys added debris netting to the entire scaffold to contain any debris or tools that might fall into the river. 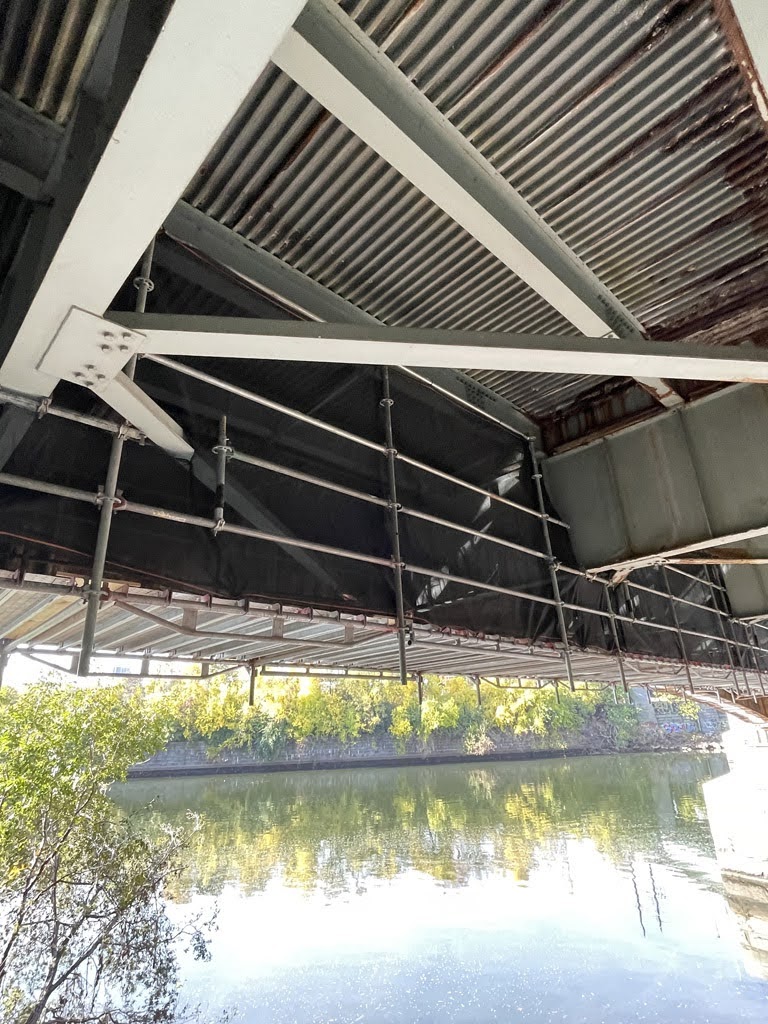 There were a few major challenges to getting this job completed.  First, was interacting with all 3 or 4 divisions to get the proper approvals and permits to start work.  And secondly we also had to keep the pedestrian and bike traffic and access going at all times during the erection of our scaffold.  You can see where we had to stage our equipment on one end and hand it up and over to assemble the giant scaffold. 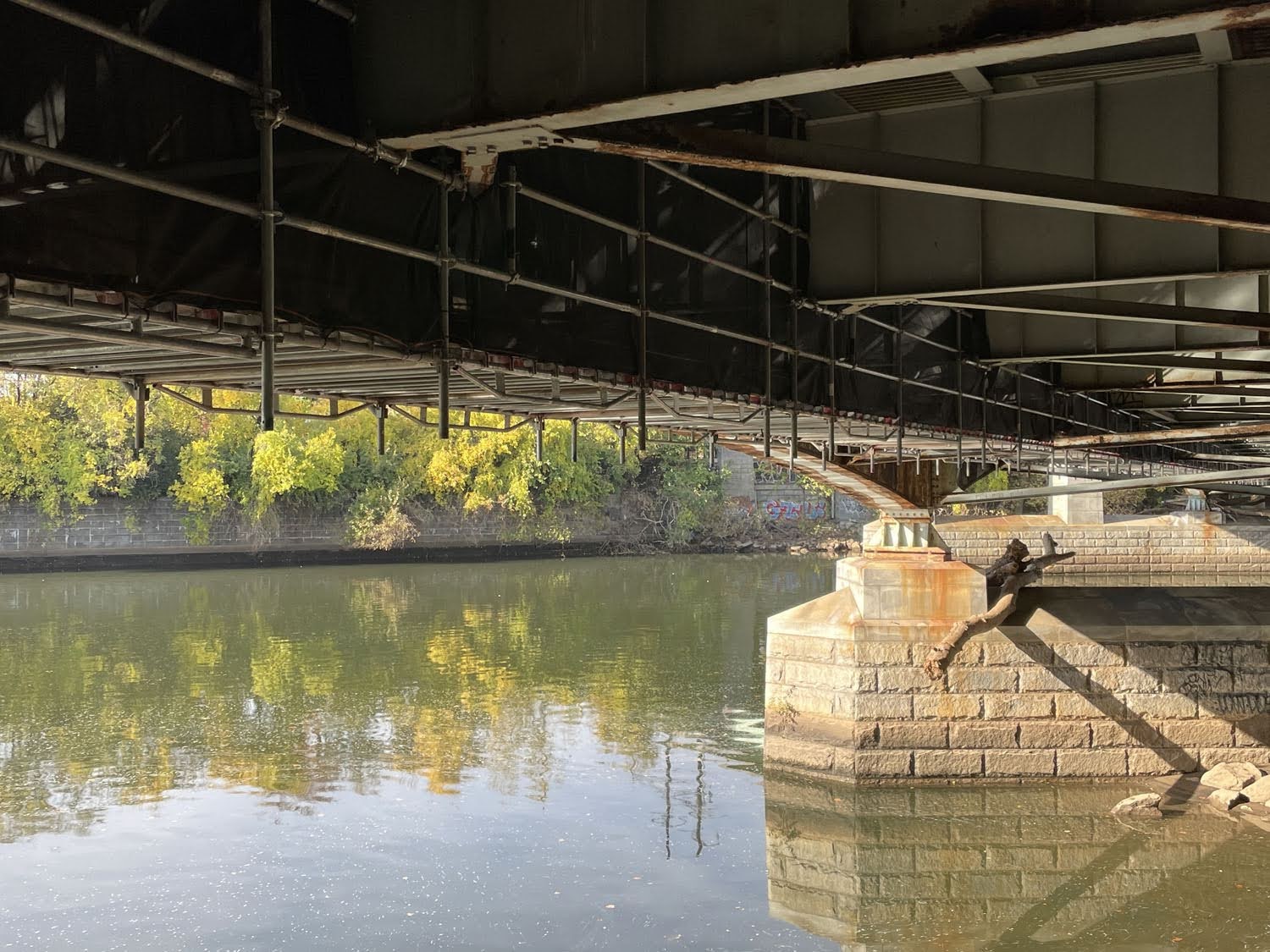 This hanging bridge scaffold or platform really is a perfect way to give crews access to the underside of a bridge while also not letting the scaffold or deck hang down too close to the water.  It also replaces the need for traditional ground up scaffold when it can’t be used, like over water or busy roadways. 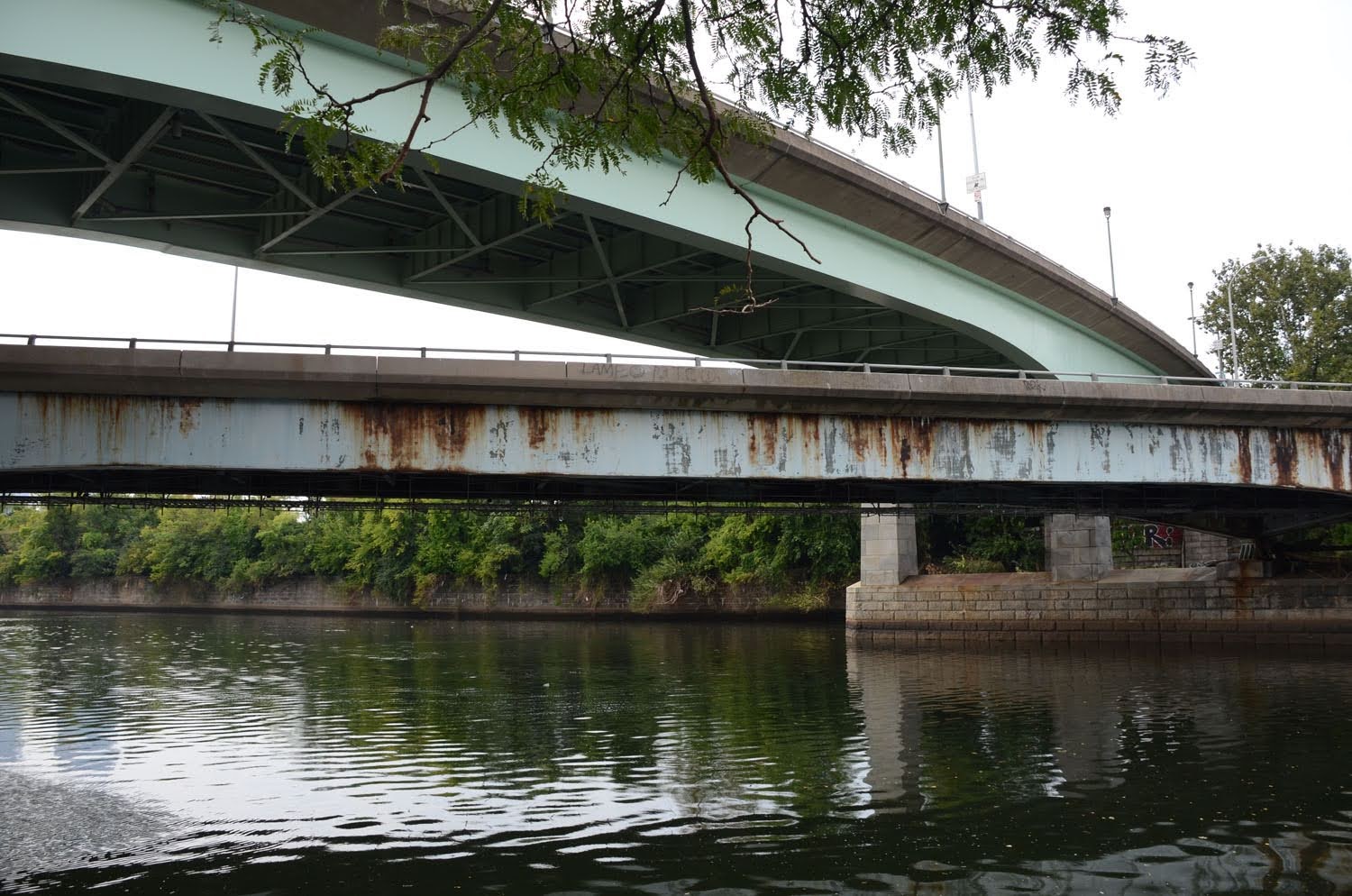 We are proud to have been called to come up with a working solution for this prestigious project.  And if you should ever need a hanging bridge scaffold or access for any of your projects, call Tony P at (215) 743-2200 today and he will take care of you.  You can visit www.superiorscaffold.com to see all of our projects or get more info. 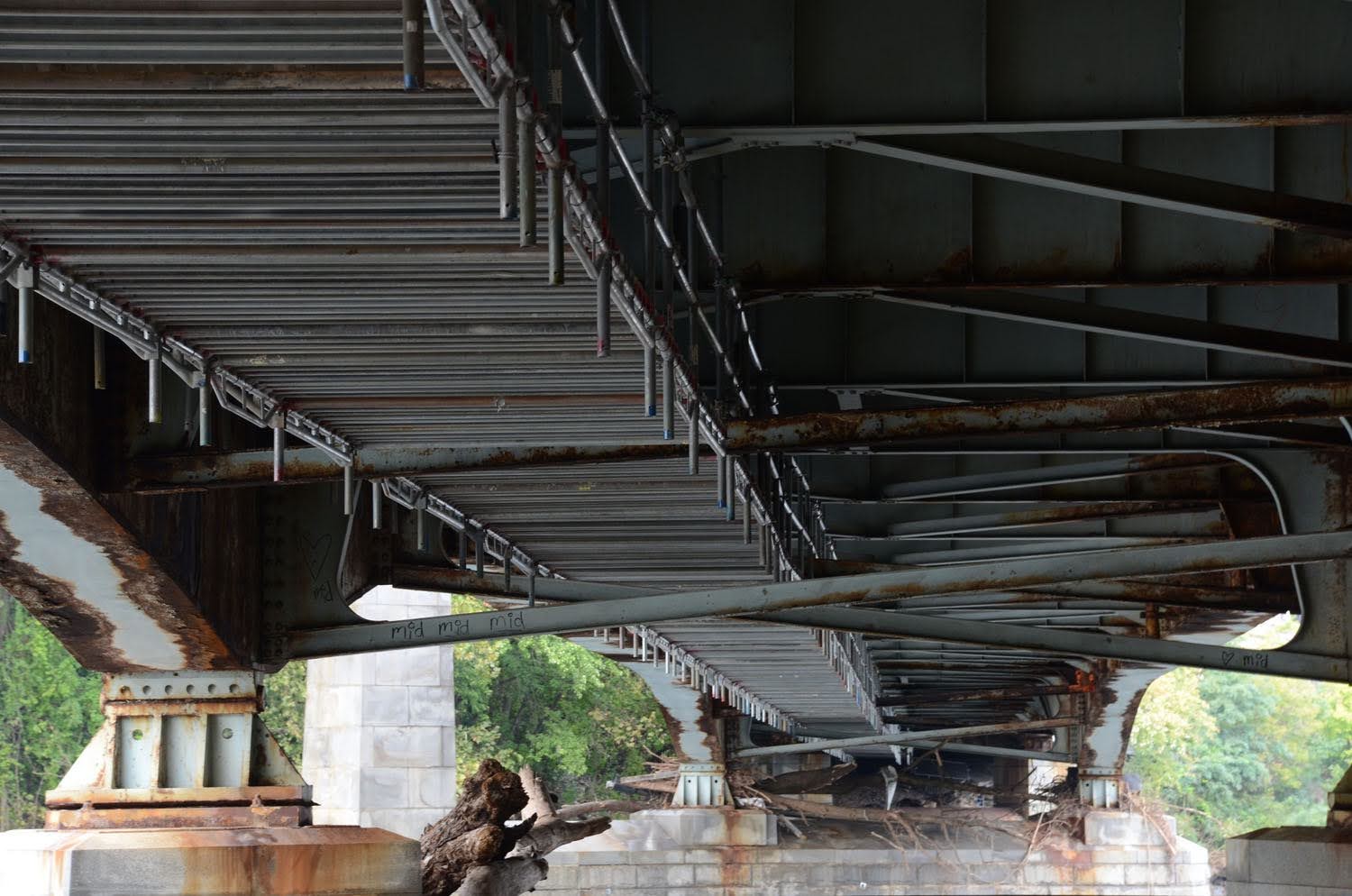 And for today’s musical number we have GnR with Patience.  Because when you do a job like this – you had better have plenty.  Rock on.