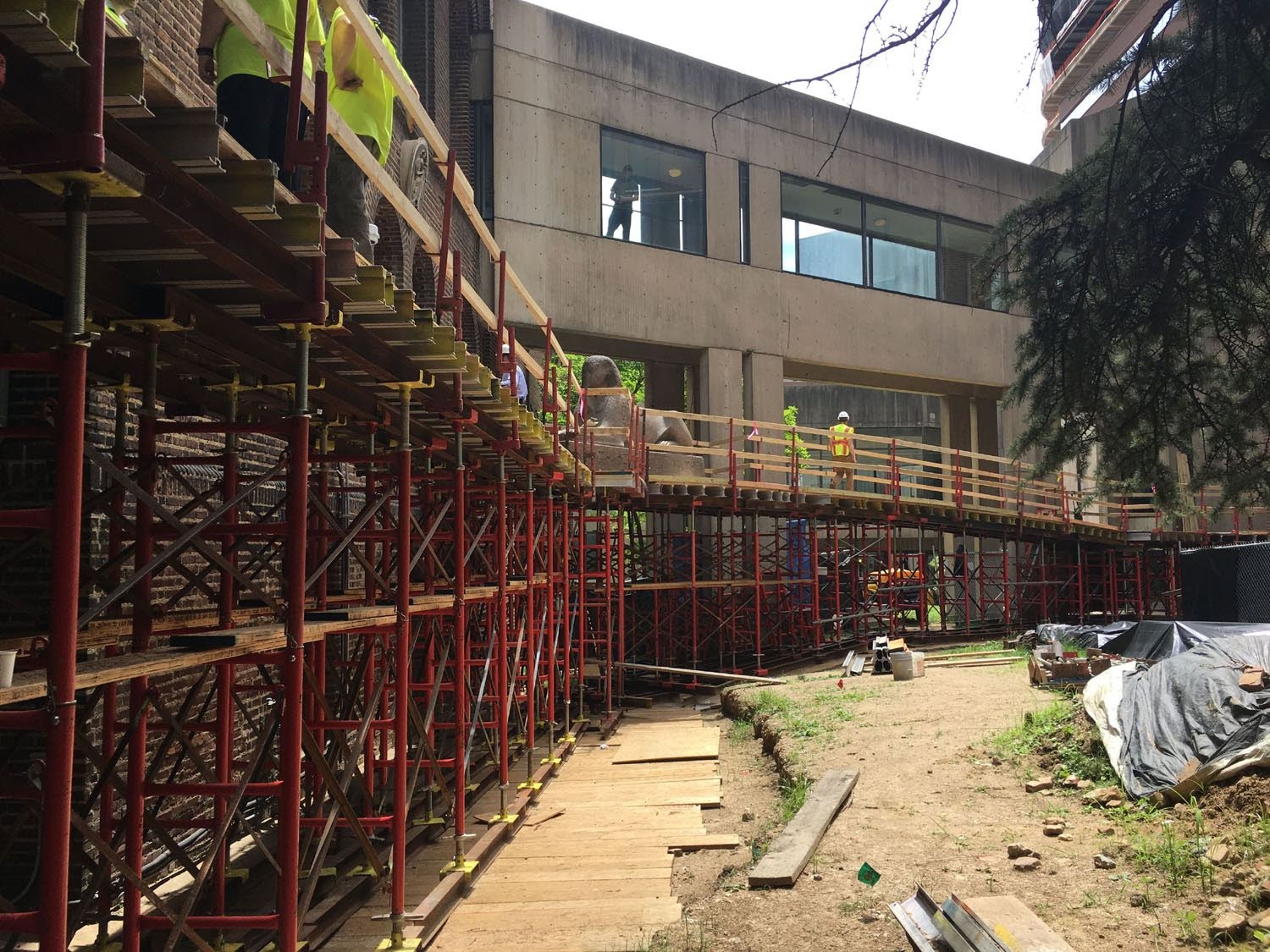 Superior Scaffold provided the intricate scaffolding ramp at the Penn Museum to get the priceless, 3,000-year-old, 25,000 pound Sphinx of Ramses II to its new location 250 feet away.

It’s not everyday that you get a call to construct a ramp to move one of the world’s rarest objects 250 feet to its new exhibit location. And it’s even rarer when you have to take that 25,000 pound statue outside, through a window, across a courtyard and then back in through another window.

Quite the challenge if I may say so myself. But the University of Pennsylvania Museum of Archaeology and Anthropology has used us on some other very delicate items (read about it here) so they had the confidence that we could deliver the goods.

This is the anatomy of that once in a lifetime move. 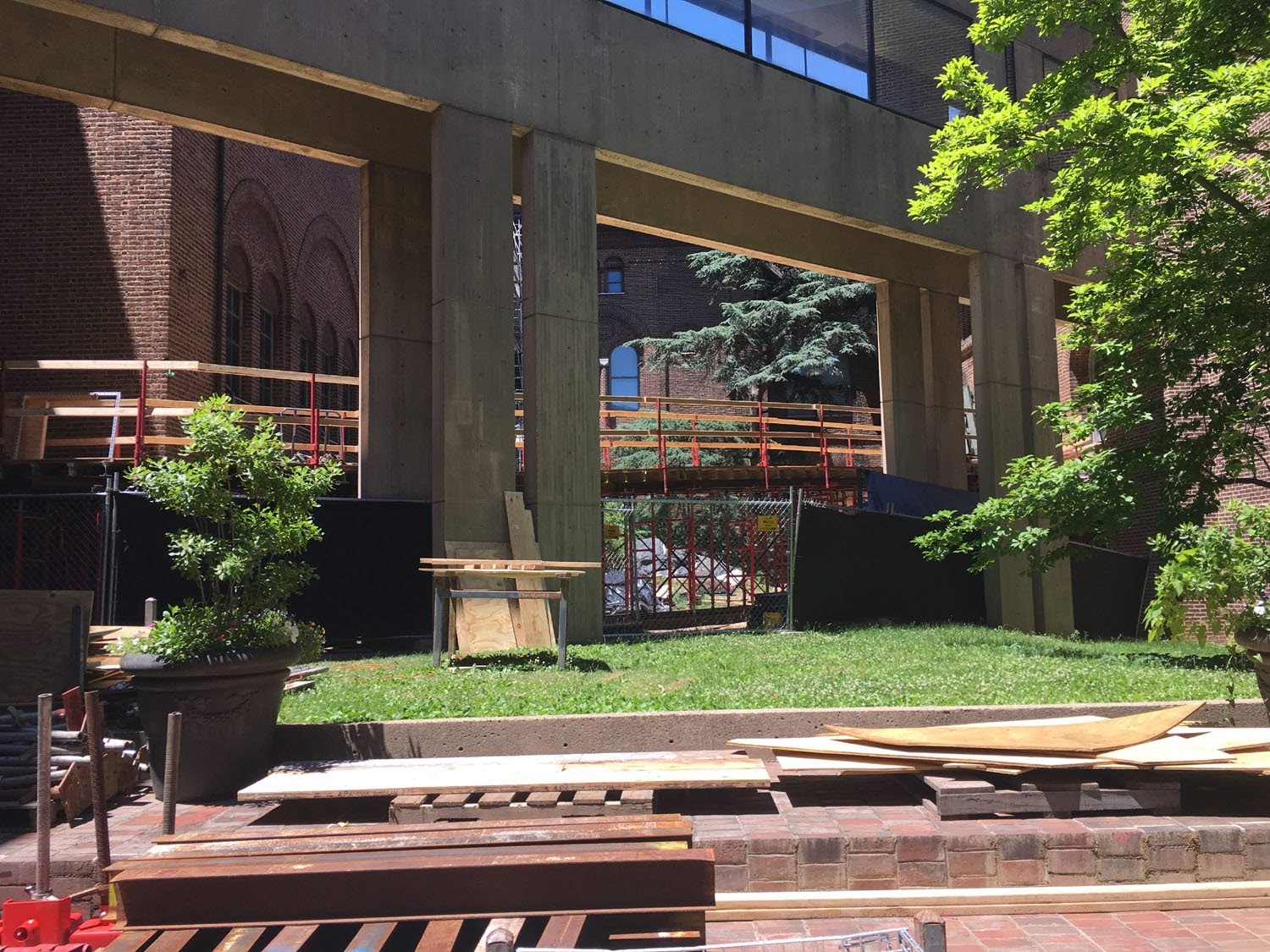 Each piece of scaffold equipment had to be walked in because there was very little access to the courtyard. 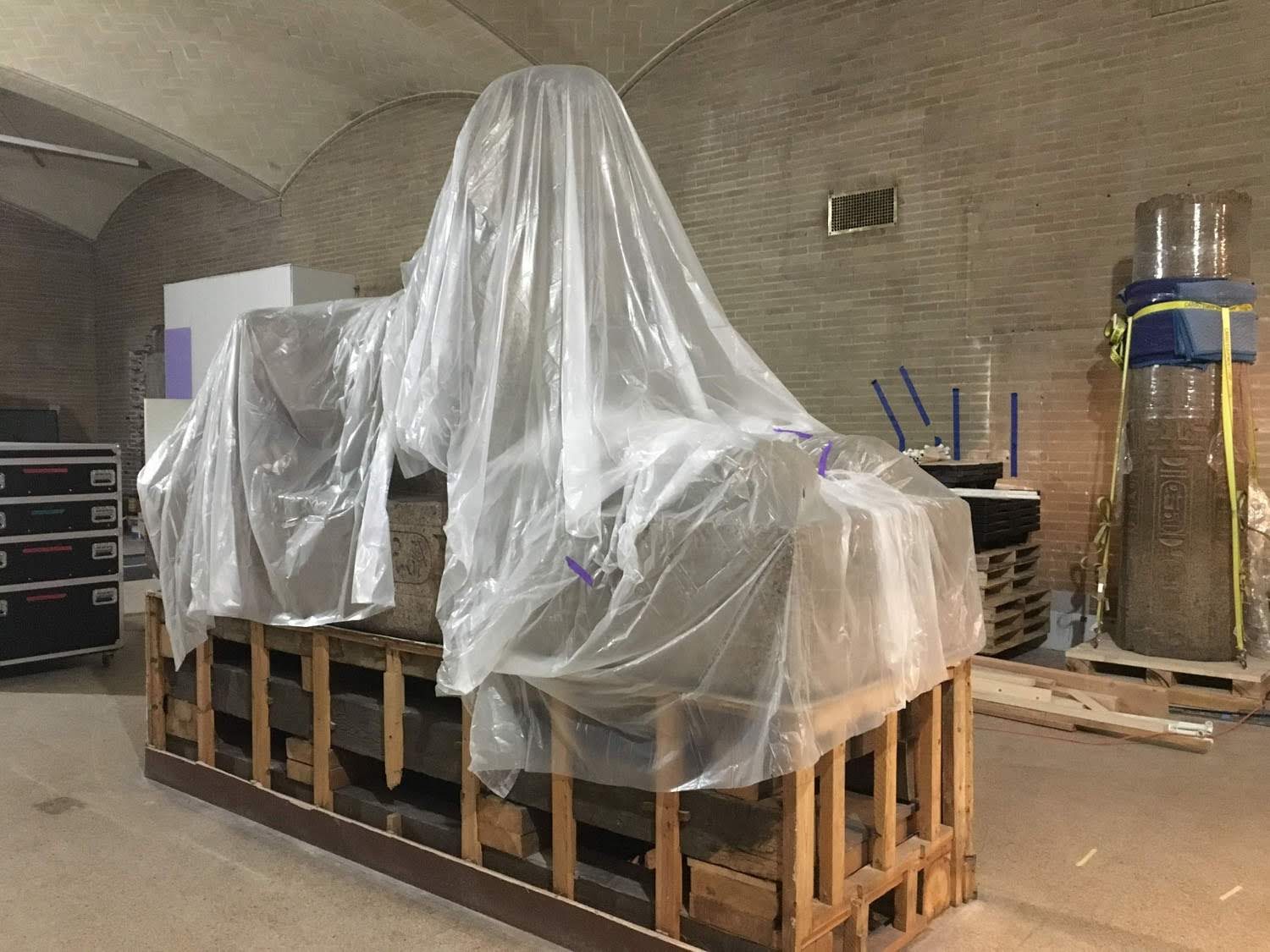 Our crew shored up the floor beneath the giant Sphinx with hi-load frames and post shores, just as security measure, in preparation for the move to the exit ramp. 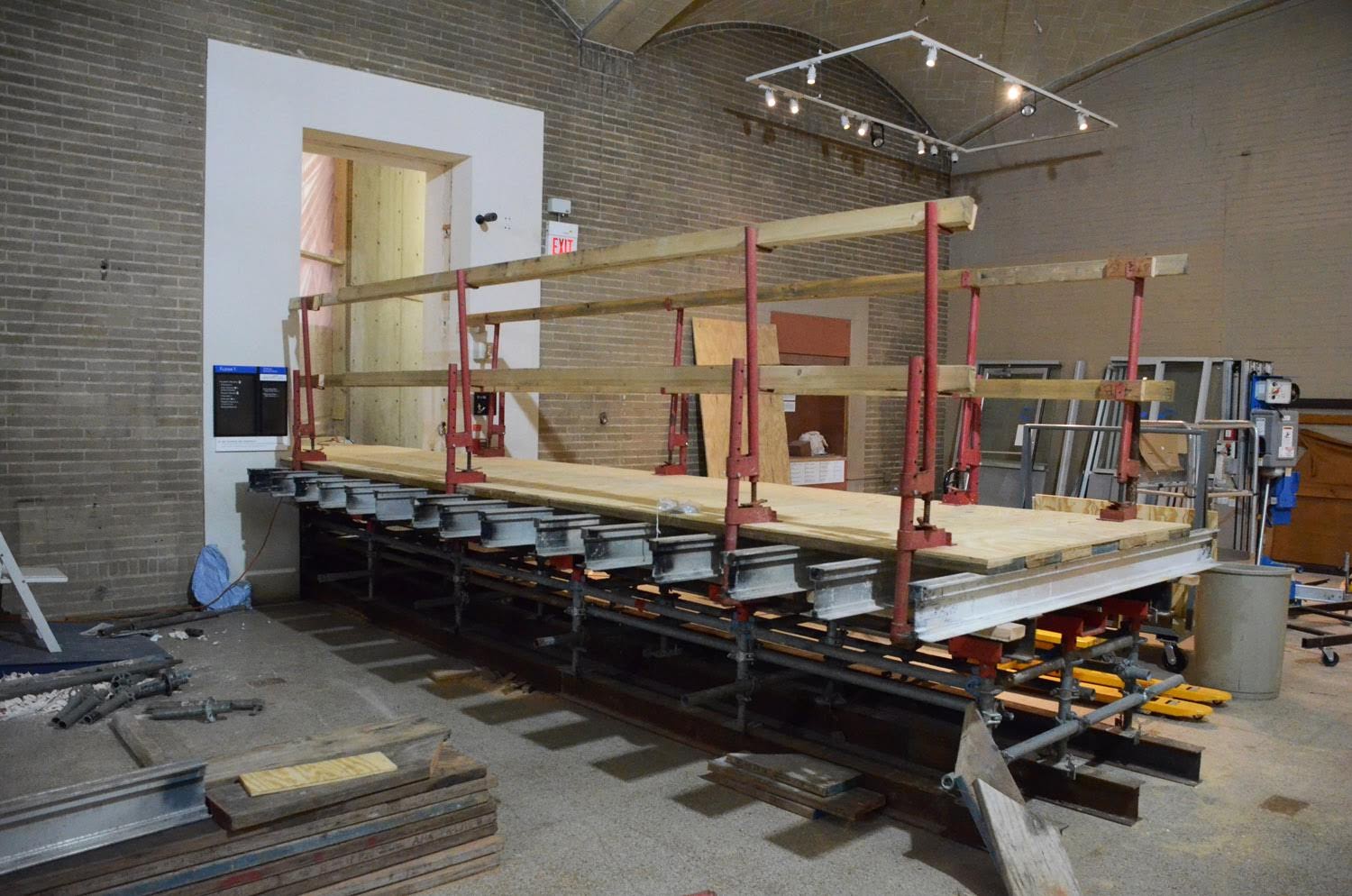 We then built an exit ramp out of system scaffold because we had height restrictions to elevate the Sphinx enough to get it through the window. 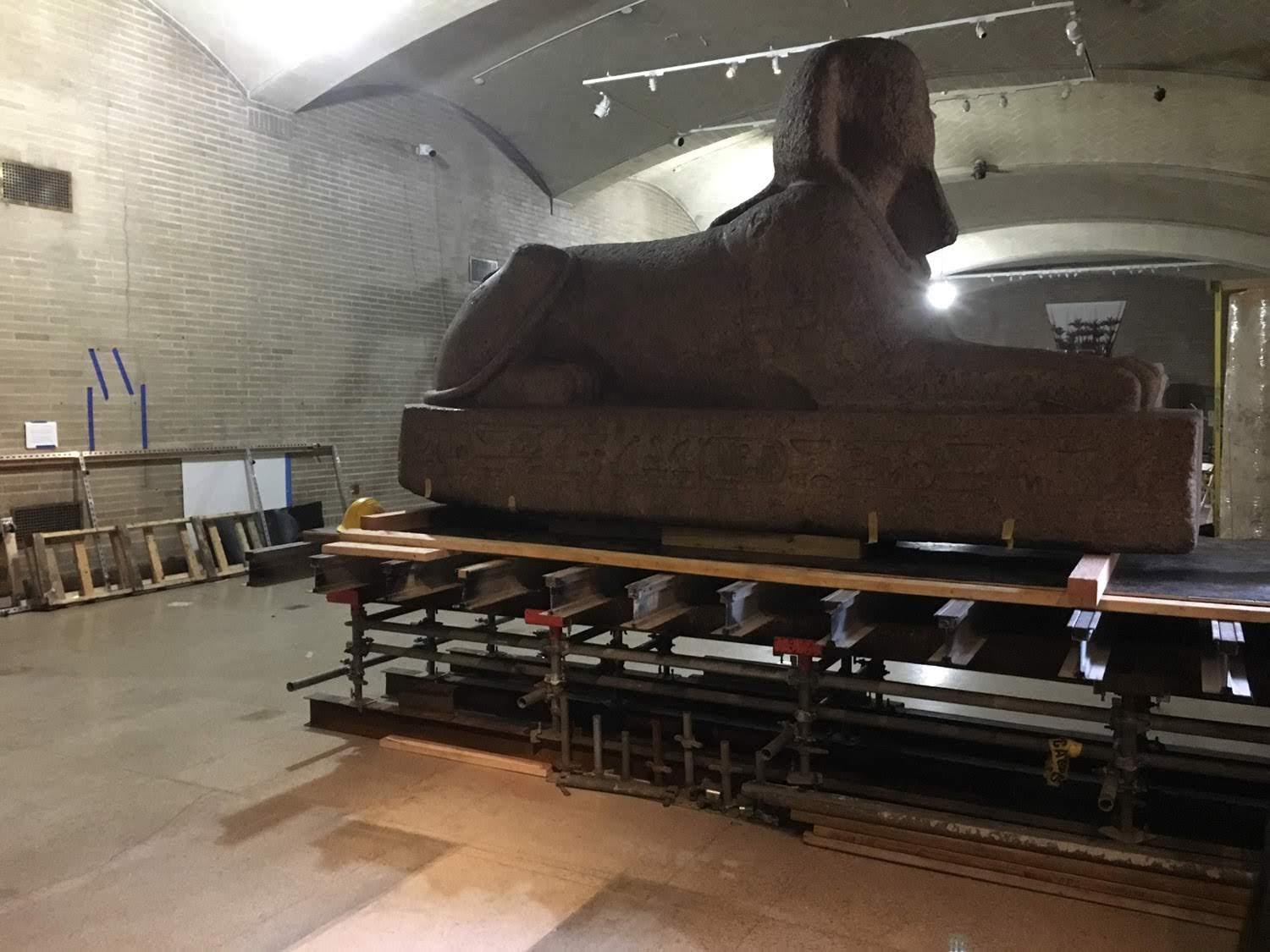 Concurrently, they removed a large window and opened the wall a bit so it would fit through the opening. 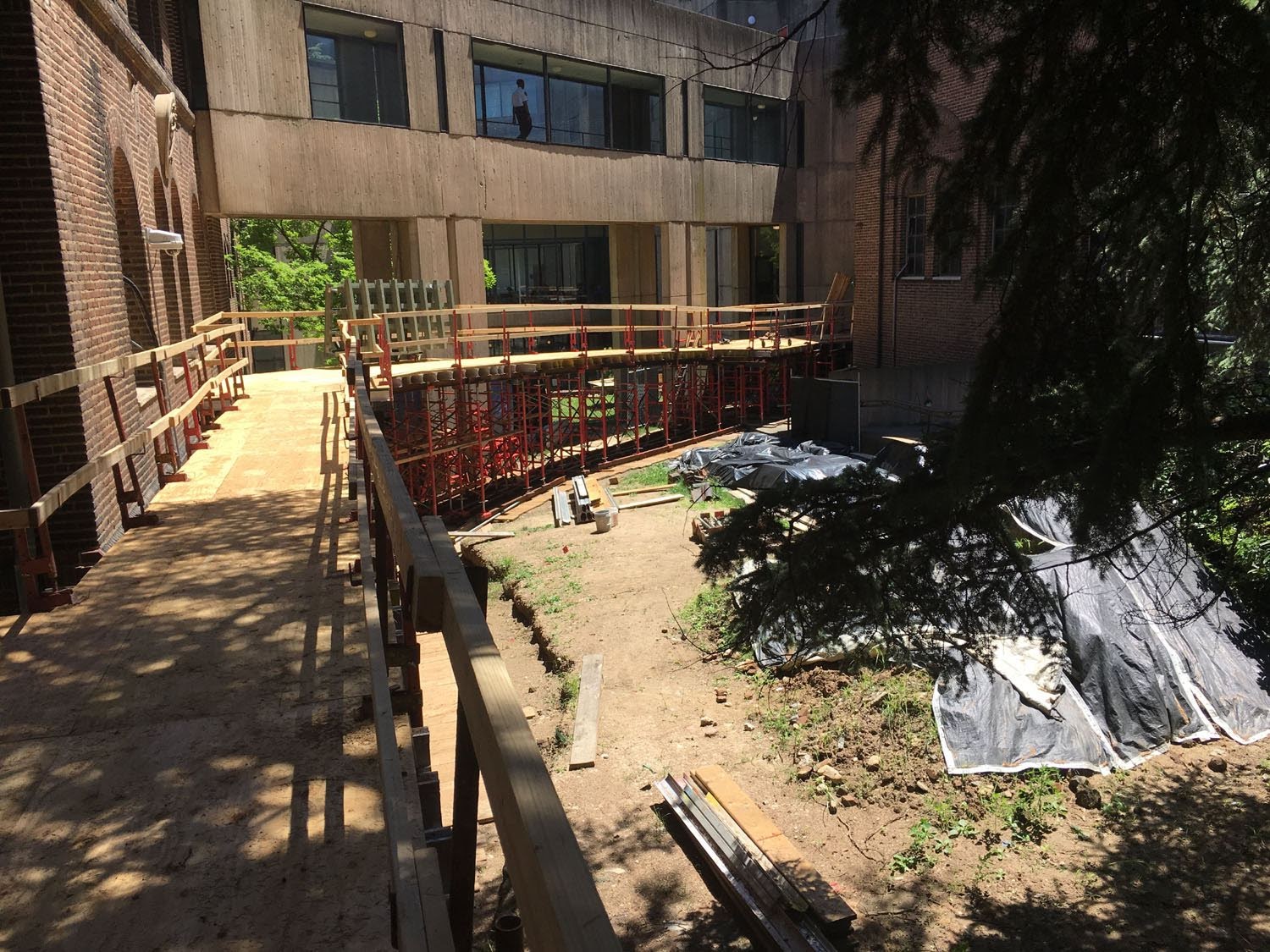 The outside ramp was constructed using hi-load shoring frames to hold the weight of the stone beast. 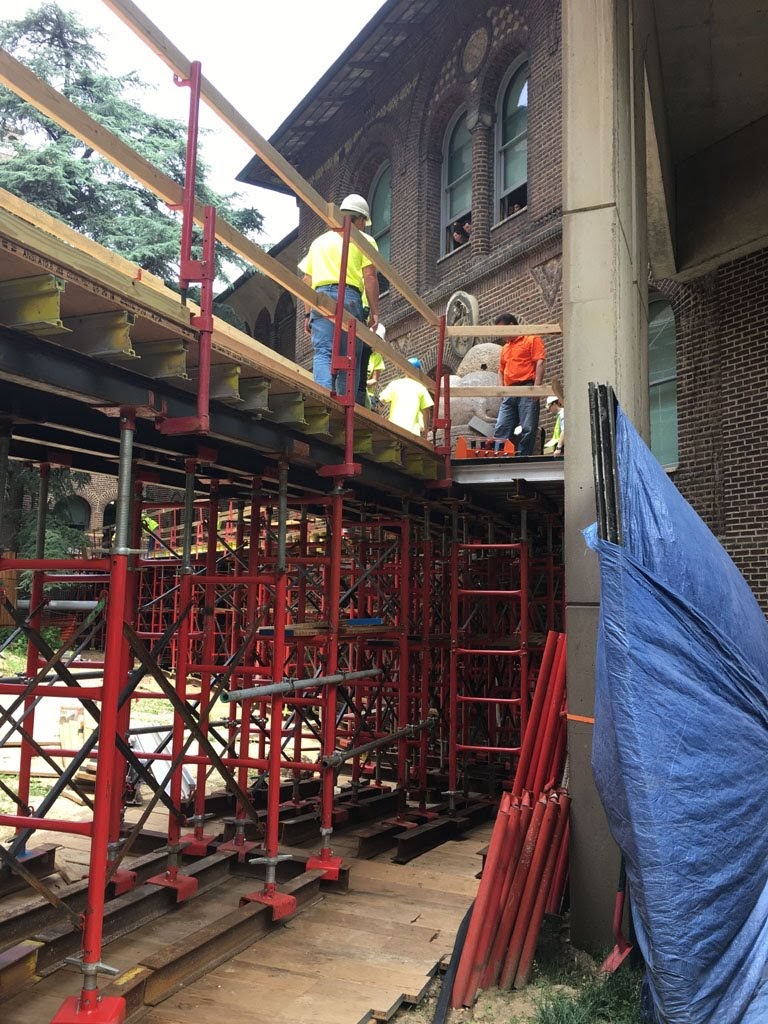 We started with wood sills on the entire run over the dirt/grass followed by steel beams and then a variety of hi-load shoring frames down the entire 250ft run. 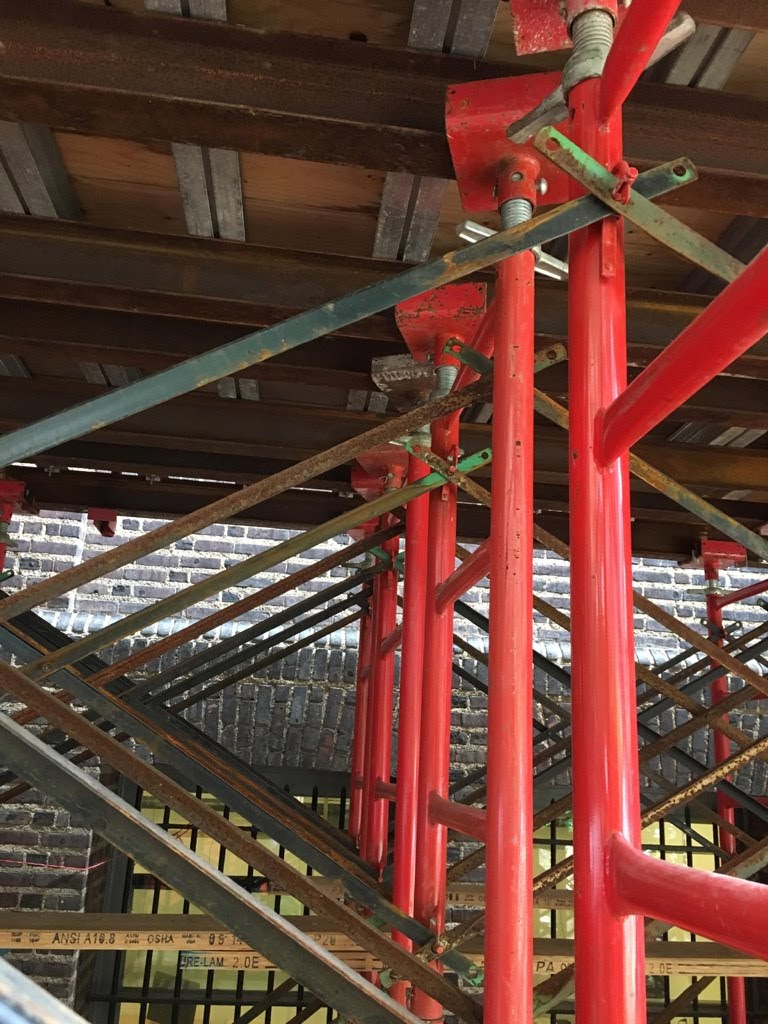 Those frames had U-heads and steel beams crossed with aluminum beams then topped with solid plank and then ¾” plywood. 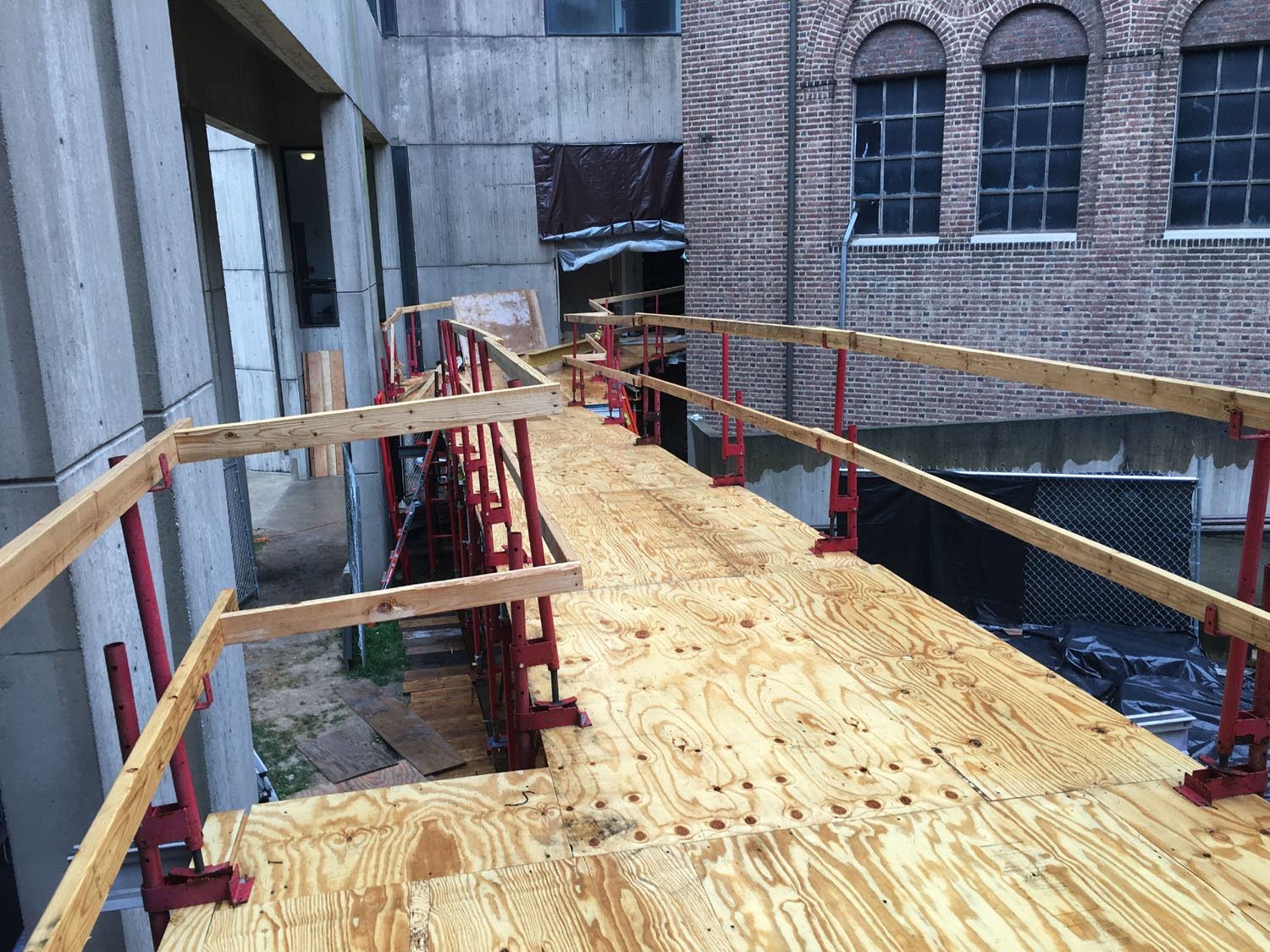 The plywood was then covered by a special surface that would help the air dollies float beneath the Sphinx. We also installed an elaborate maze of guardrails or stanchions along the entire route. 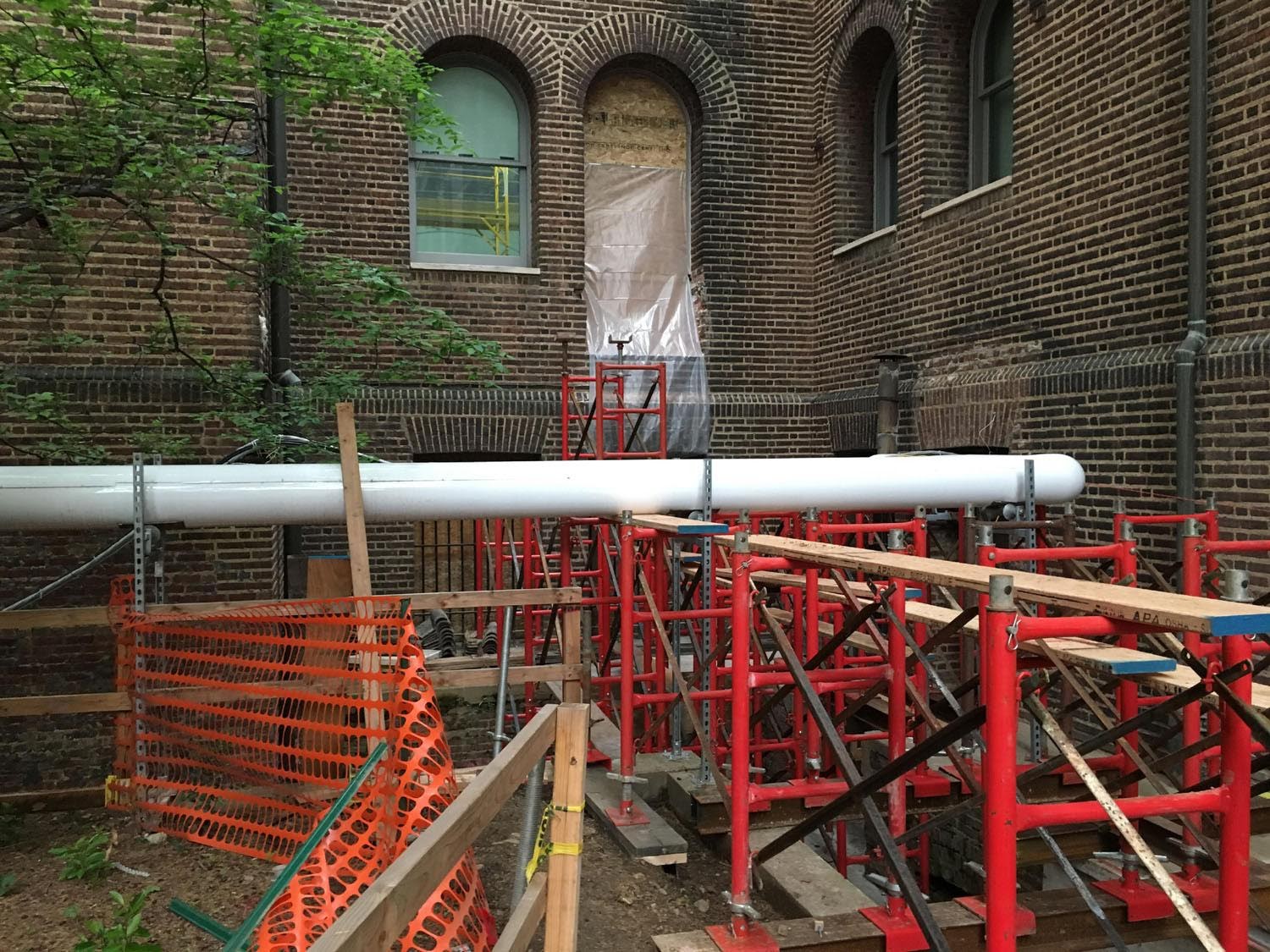 It took some creative layout to position our shoring frames around several pipes at the back end of the ramp. 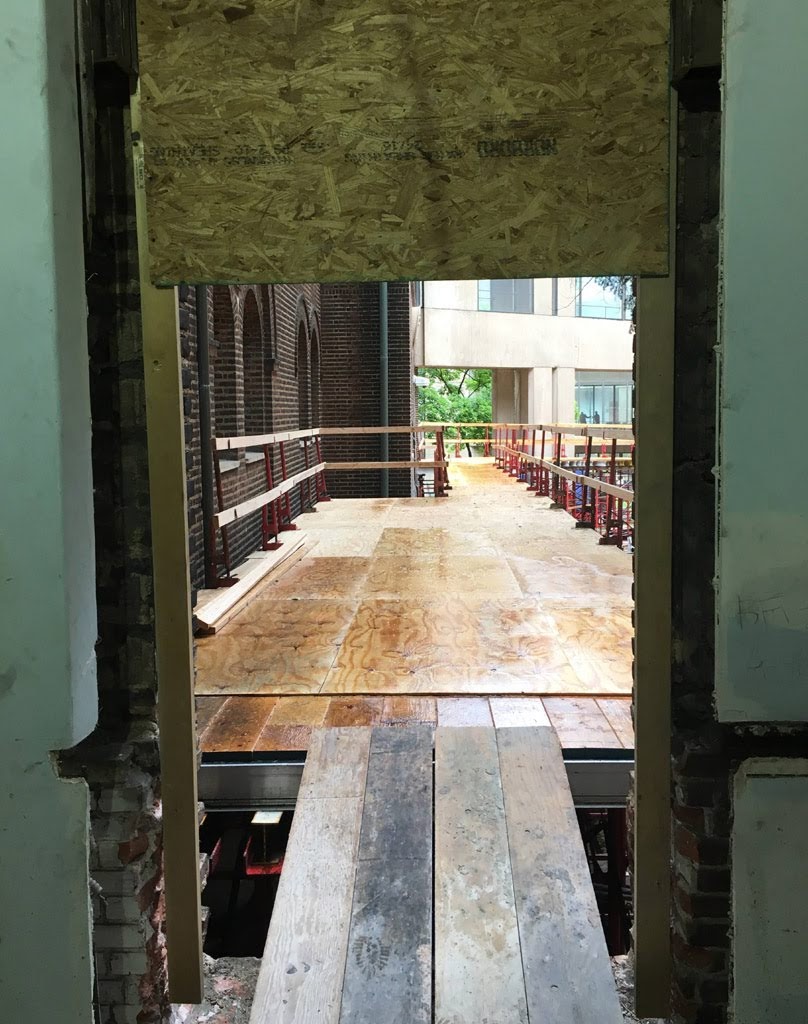 Another window was removed to get the Sphinx into its new resting place. 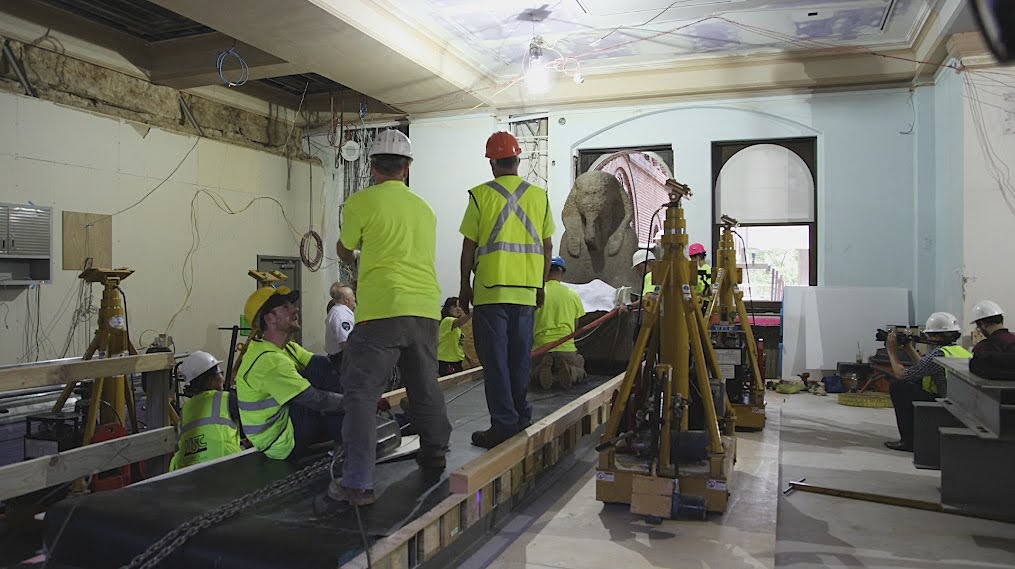 And finally, we built another deck or loading platform out of system scaffold on the inside at the other end of the long ramp to receive the giant stone carving. 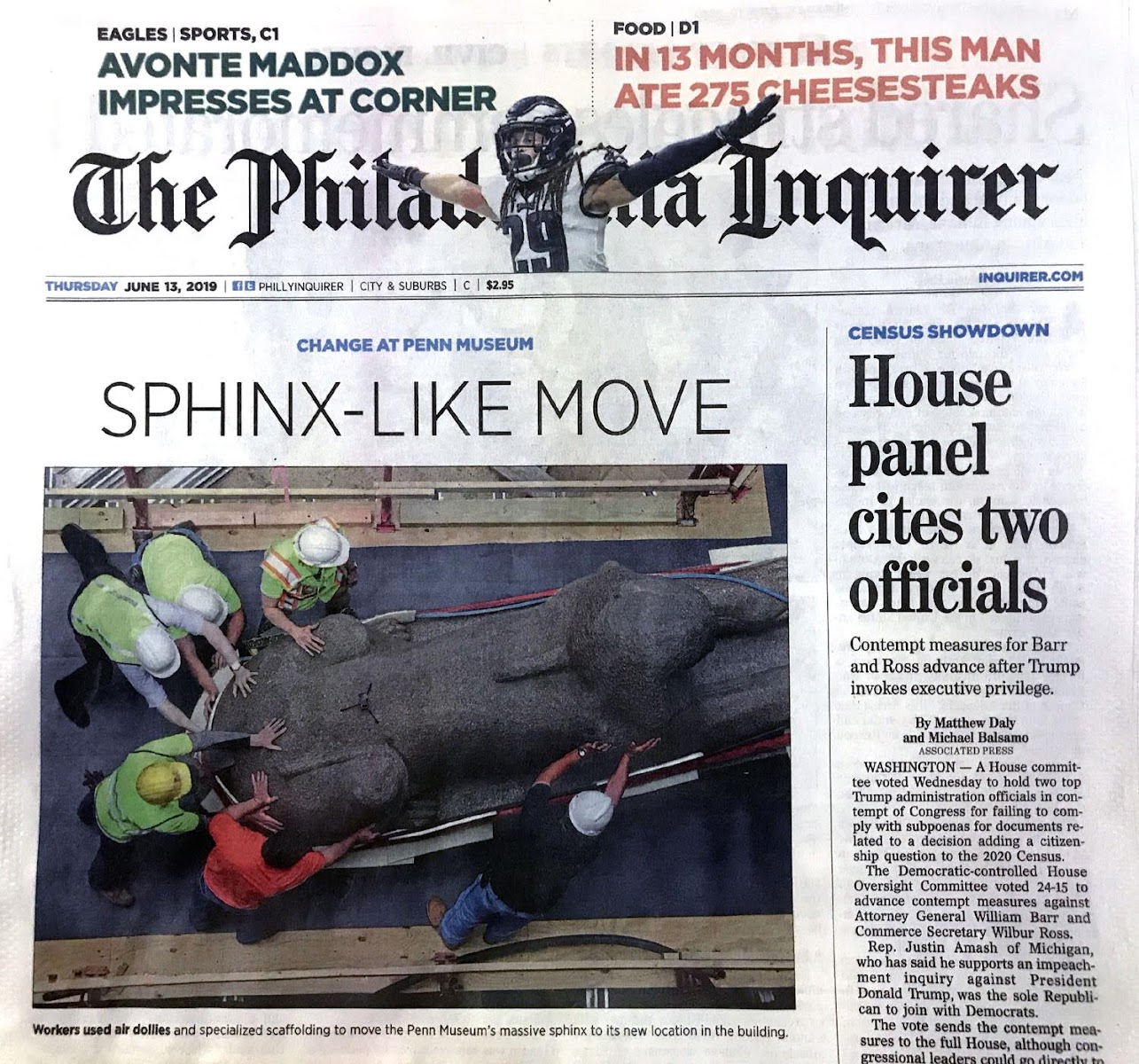 Here is a series of photos as the priceless stone object made its way across the courtyard to its new resting place. 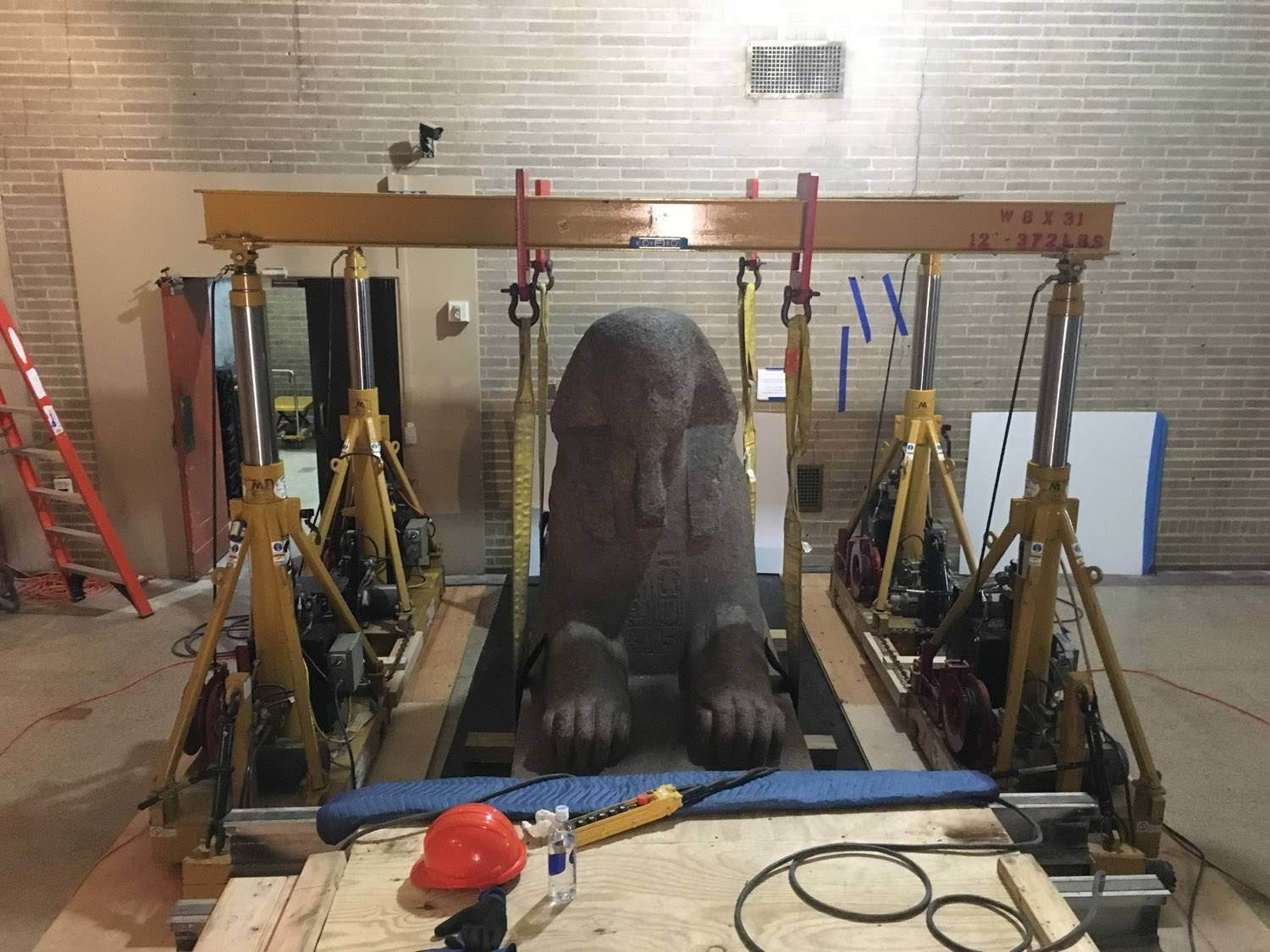 The Sphinx was first hoisted onto our ramp using a hydraulic lift and placed onto 4 air dollies that used compressed air and essentially floated it off the ground allowing crews to push it the entire distance. 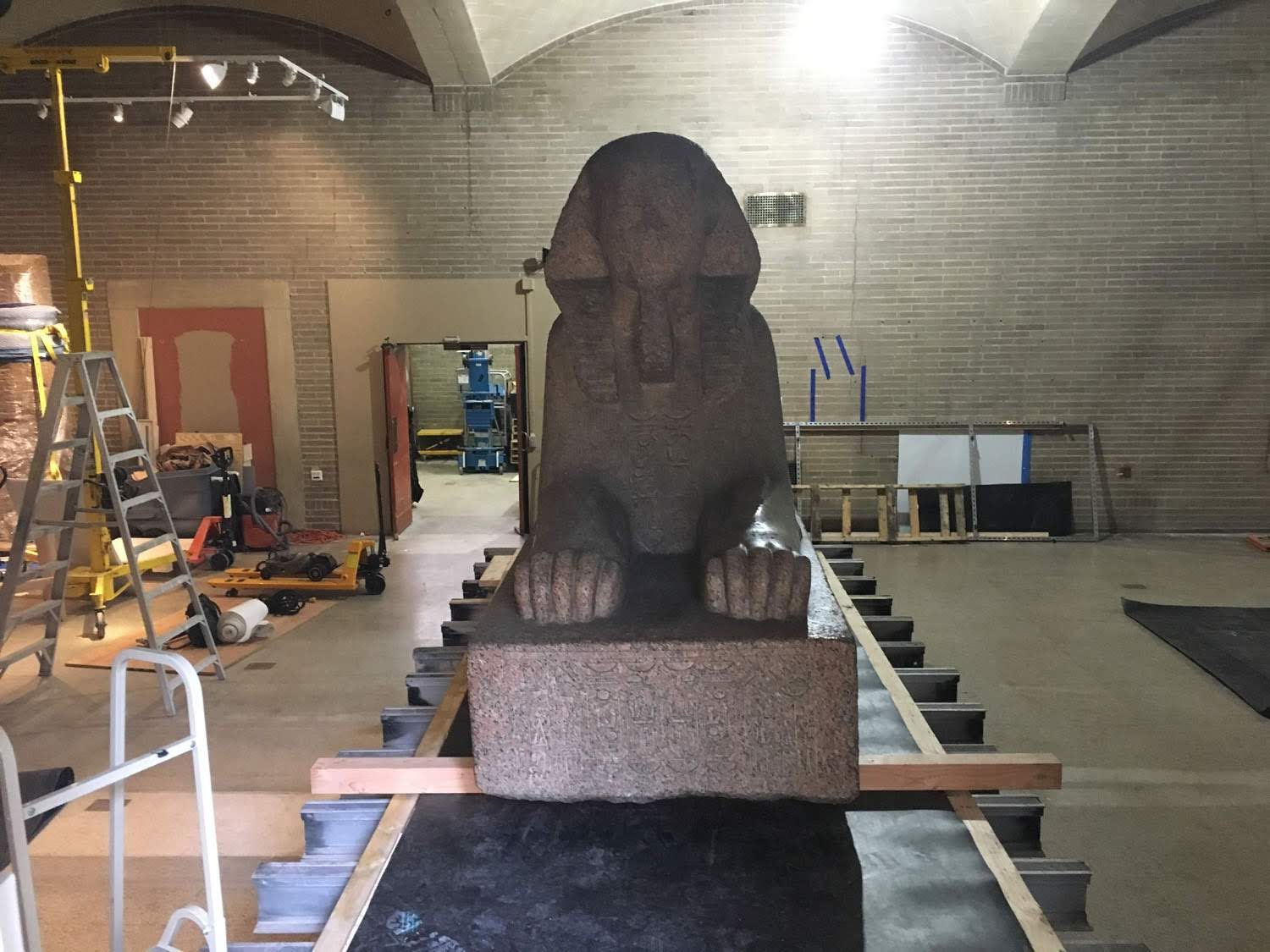 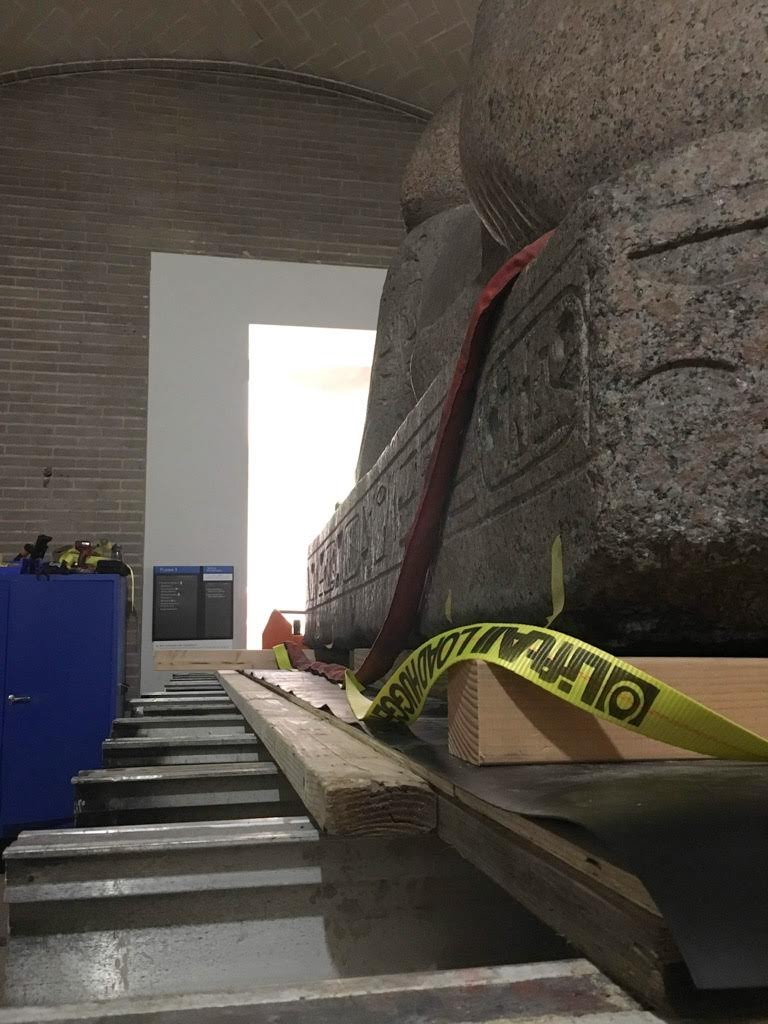 Here is the Sphinx on its way out. 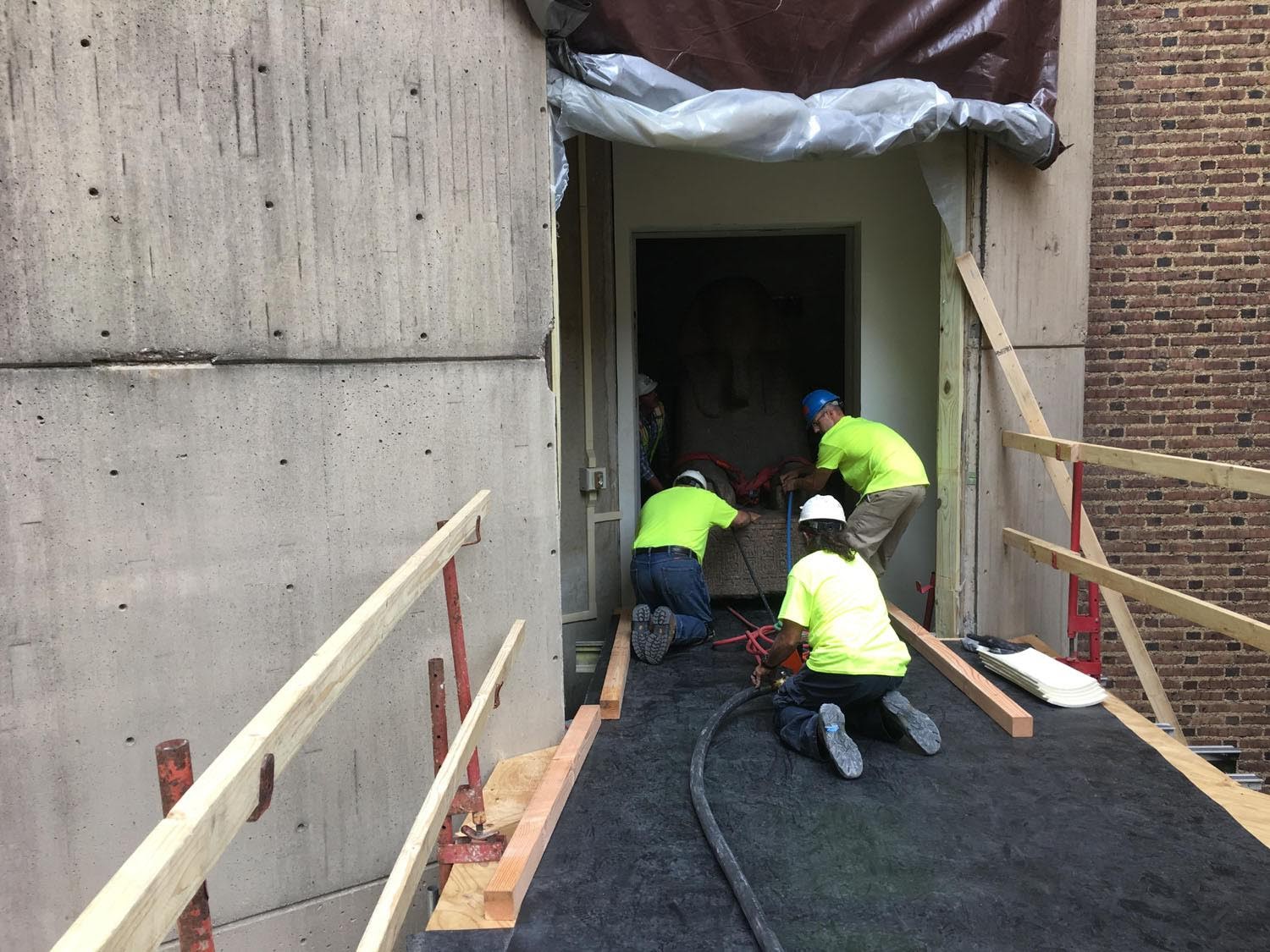 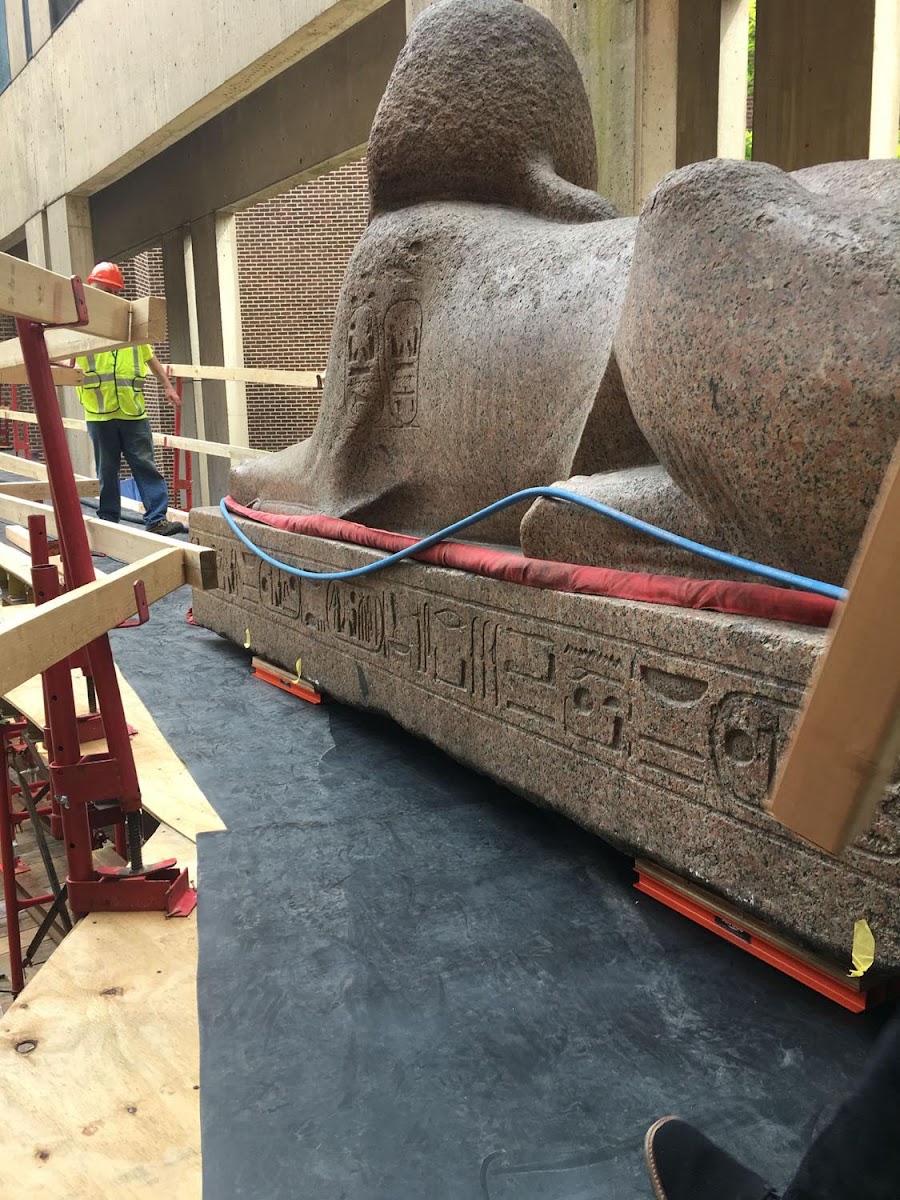 You can see the air dollies under the corners in this photo – as well as the intricate carvings on the side of the Sphinx.

This is the first time it had seen light since it was moved into the museum back in 1926, when the gallery was built around it. (see the pic from the museum’s website by clicking here).

The red granite, or stone of kings, as it was called, sparkled in the sunlight. 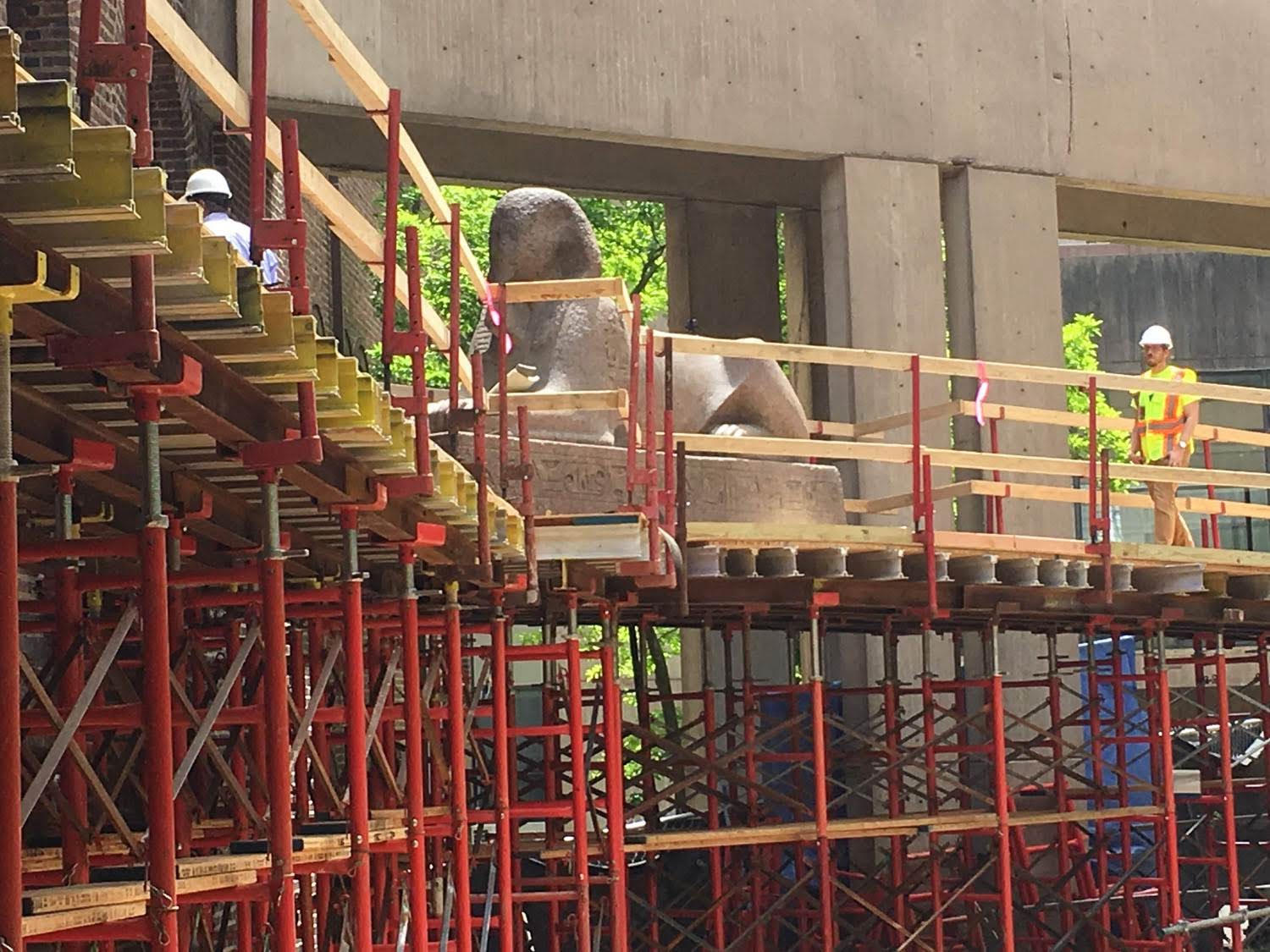 The Sphinx is a lion with a human head and represents the power of the Egyptian king. It is carved out of a single block of red granite.

Alternate Design Solutions did the engineering on this job and they did magnificent work. John at ADS was given the weight and dimensions of the Sphinx and used soil compression test measurements to calculate the size and weight of the platform/ramp needed to make the move.  The resulting platform is something to behold. 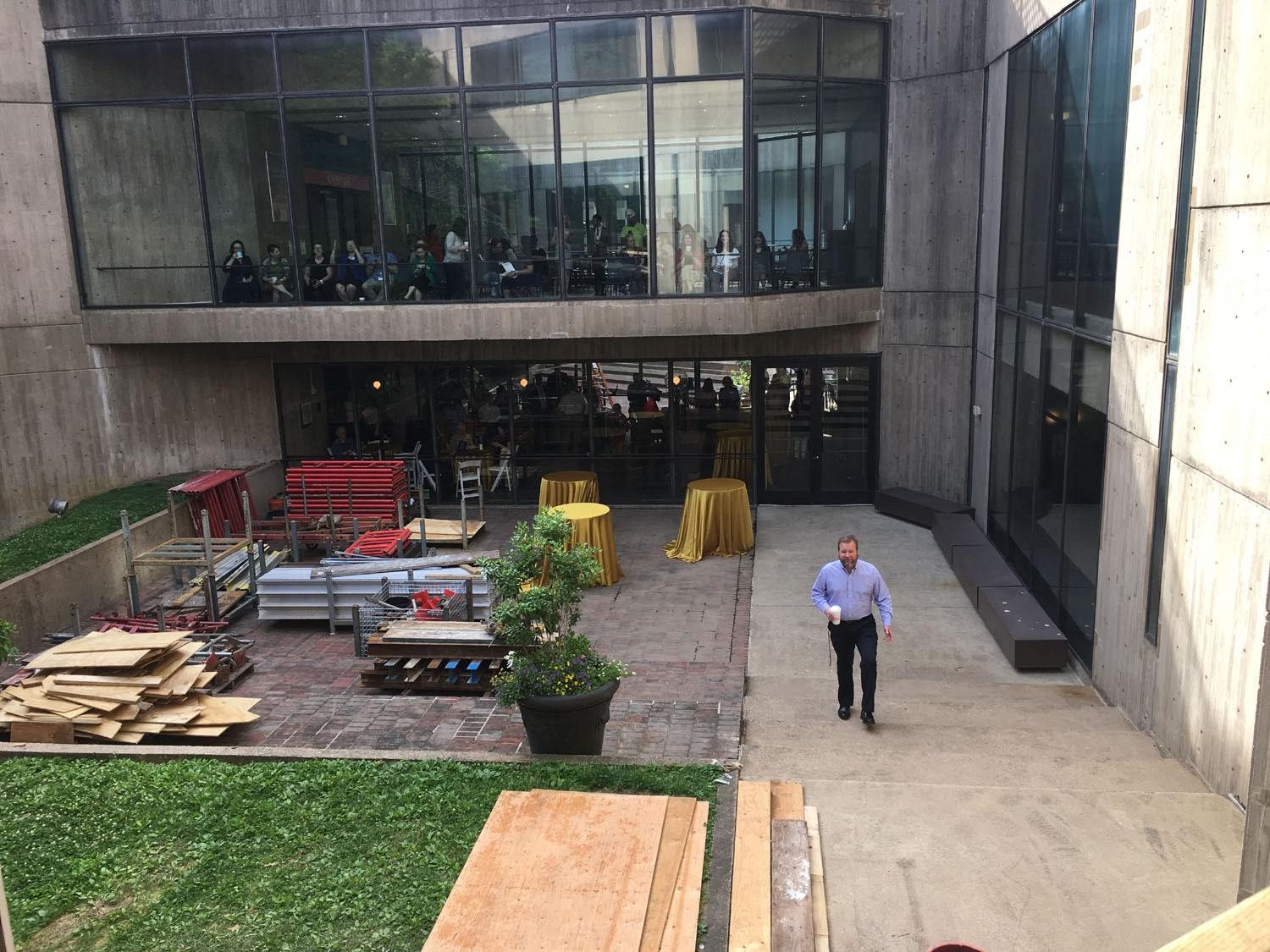 It moved at a slow pace while hundreds of spectators watched the event. 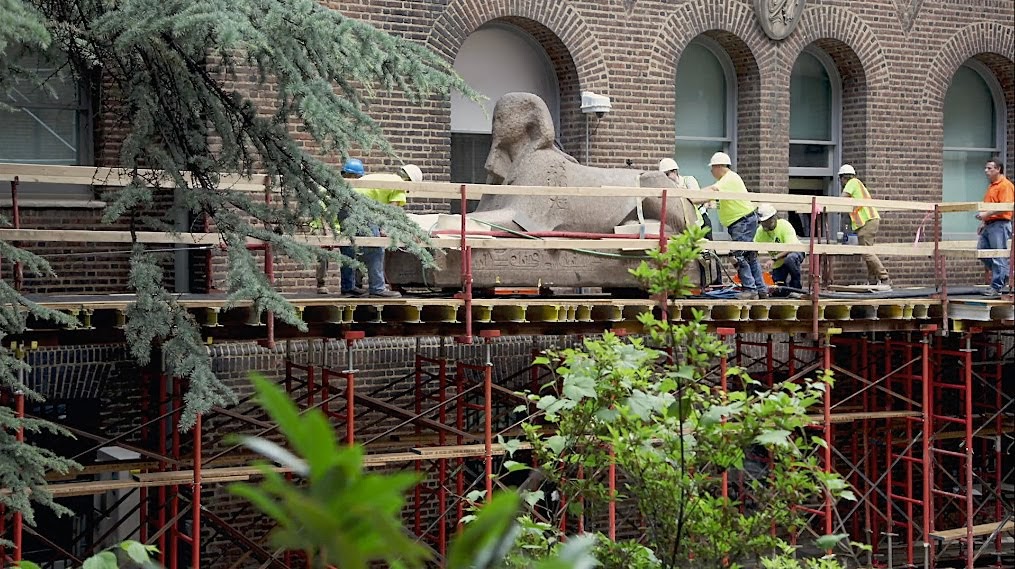 It took between 4 and 8 people to move the behemoth along the route. 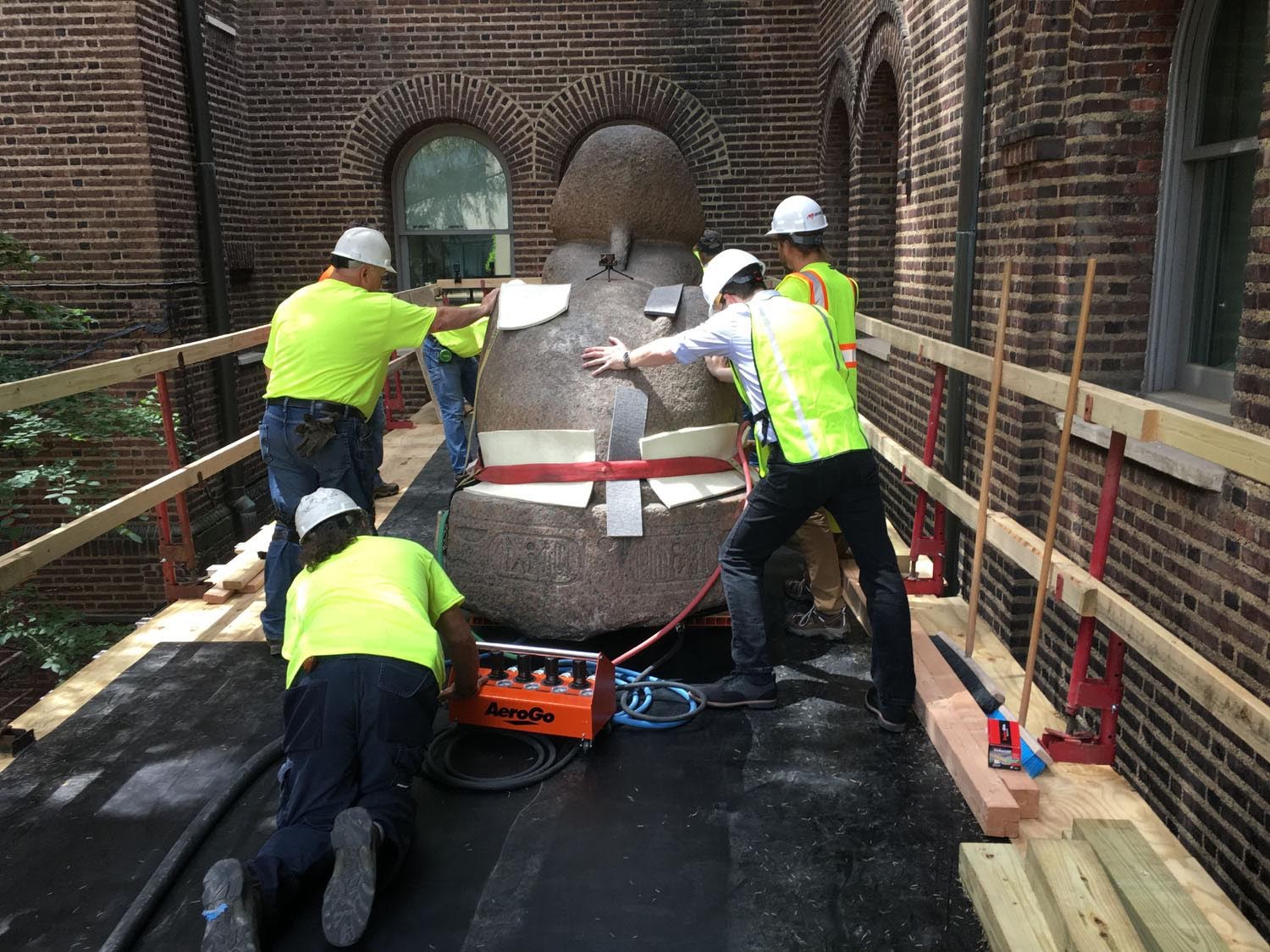 Once to the other side of courtyard, there was only 1.5 inches of clearance on either side of the new opening for the stone statue to slide in between onto our second loading platform.

As a precaution we shored up the floor beneath the entry point as well using 20 kip shores. Penn Museum had a new floor designed and poured just to accommodate the weight of the ancient object in its new display. 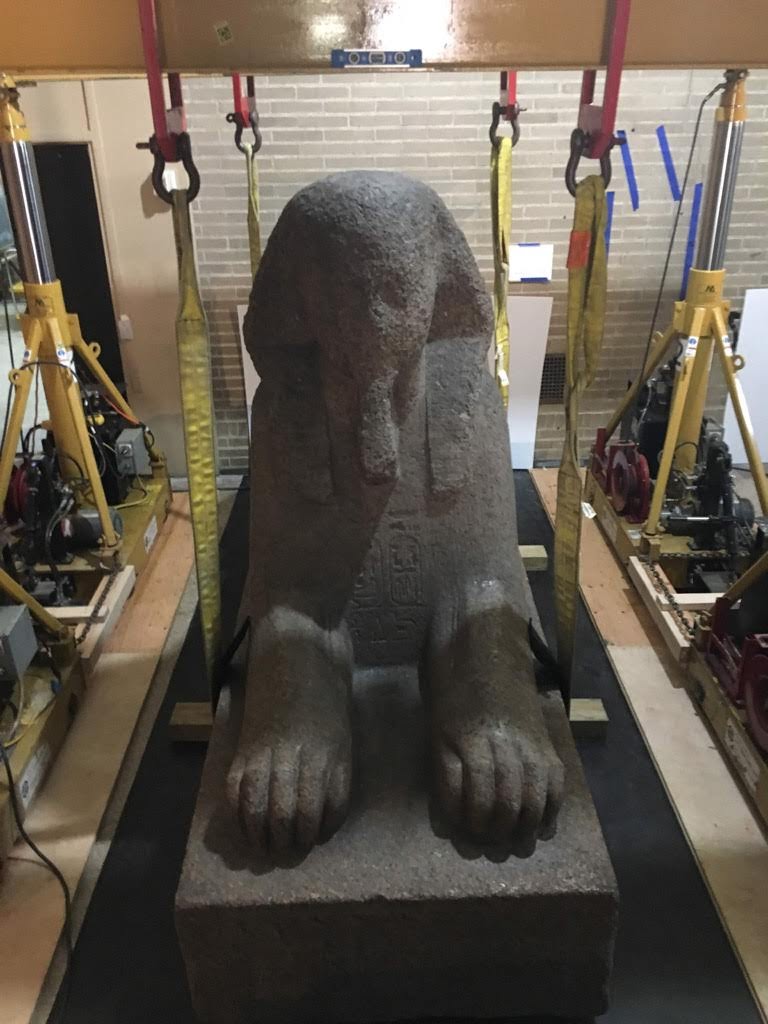 A hydraulic lift removed the Sphinx from our platform and onto the concrete where it would be moved to its final resting spot.

The entire move went off as planned and it was truly a once in a lifetime opportunity. We are thankful that the Penn Museum trusted Superior Scaffold with this priceless object. 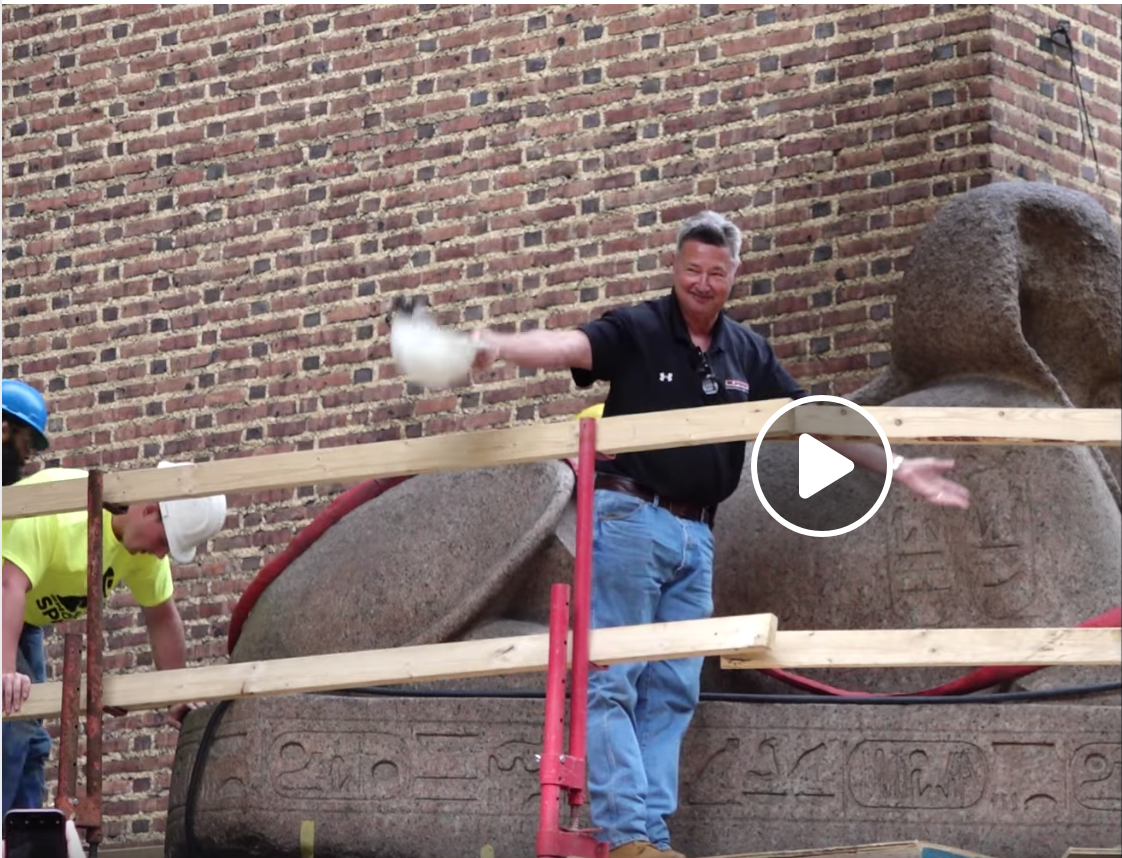 The satisfaction of everyone involved was evident in this screen grab of our estimator, Pat McAndrew, just as the Sphinx passed the The Philadelphia Inquirer video camera.

Be sure to watch this incredible time-lapse video Penn Museum put together. 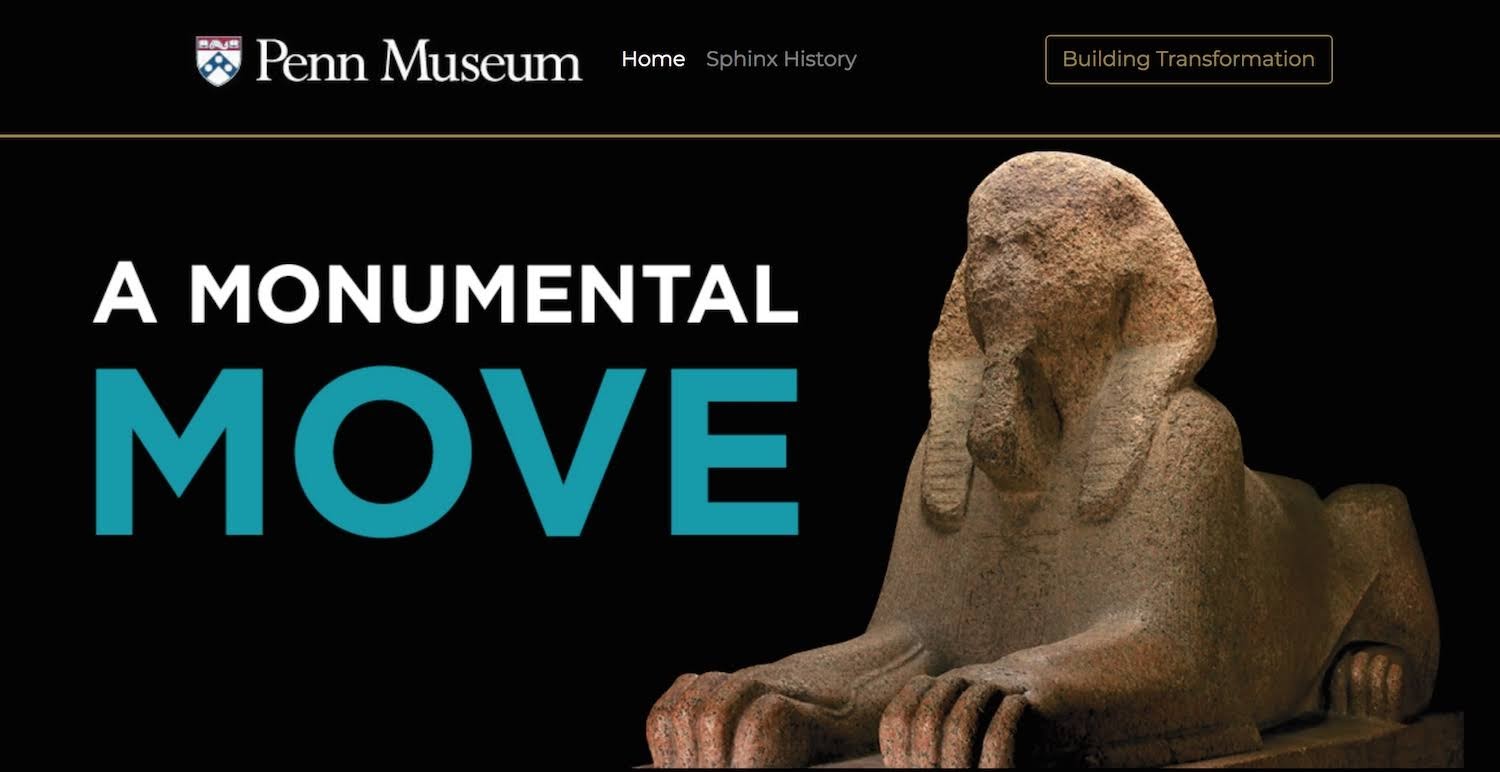 They also have great links to the history of the Sphinx and how it got here in their blog.

And below are some other video links for you to check out.

If you need scaffolding, shoring or access trust the best, Superior Scaffold. Call (215) 743-2200 today or visit www.superiorscaffold.com to see how we can help you.

It just makes sense to play this for today’s musical selection.

Pat suggested “You Belong to Me” from The Duprees – and what a nice track. Enjoy.