Some jobs go off just as planned and then others…well, let’s just say need a little extra attention.  You see, from the outside a job looks one way and then from the inside it turns into an entirely different animal. 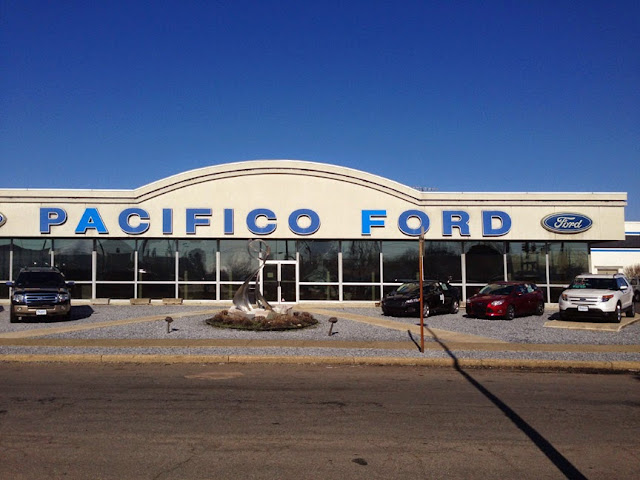 Pacific Ford was one of those animals.  A simple shoring job to create a large display room and offices overlooking the service center turned out to be more than anyone imagined.  But because we have the best guys in the business – it wasn’t anything we couldn’t handle.  Just like Ford trucks we can go anywhere and do just about anything. 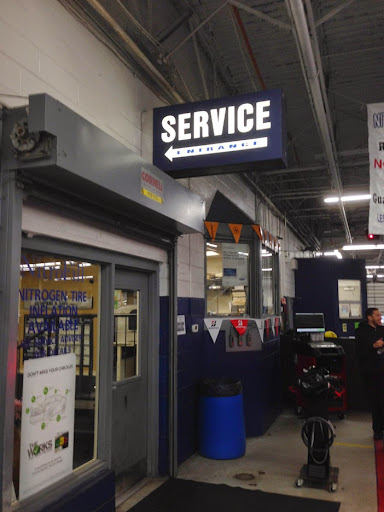 Let’s take a look at this complex job one photo at a time. 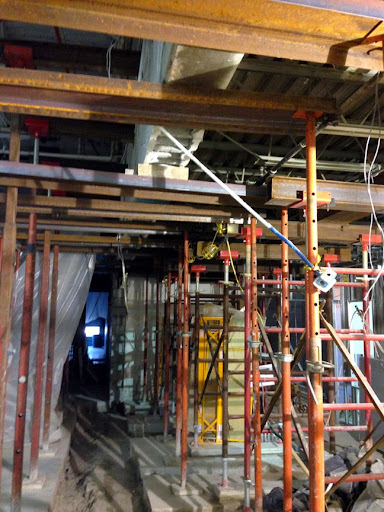 Just giving you a peek of what’s to come…

Pacifico Ford, serving Springfield, PA & Camden, NJ, wanted to expand the working space for their service guys so they decided to remove an entire wall facing the drive-in service bay.  No problem.  Oh, and they wanted both the service bay to be open every day for business as well as the offices on the 2nd floor above.  Again, no problem. 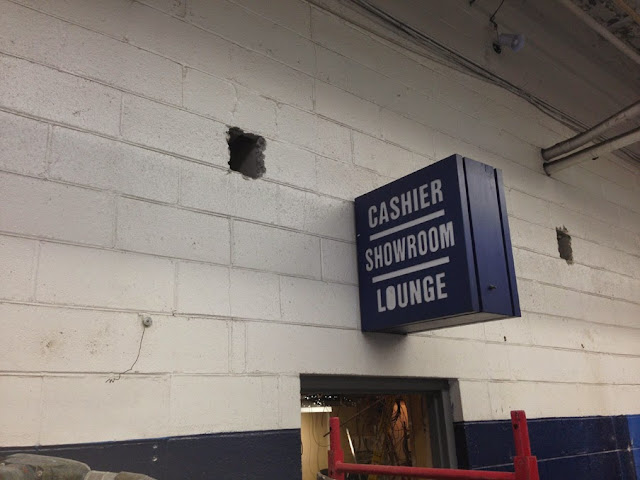 In order to do that they called Superior Scaffold to shore up the wall so giant steel beams (headers) could be put in place to support the 2nd floor above the opening. 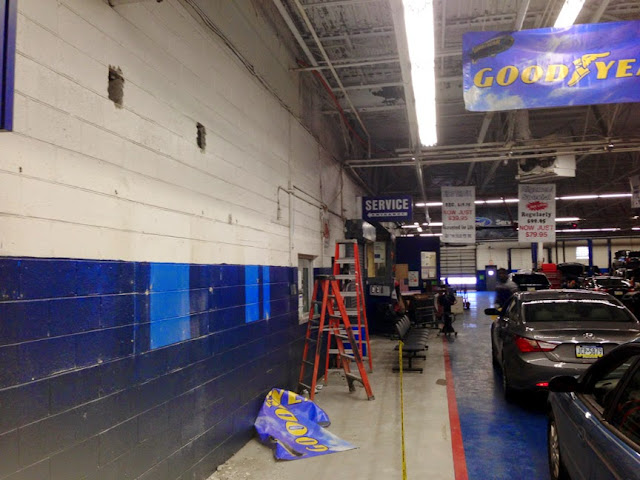 You can see the start of the job was to cut holes in the wall where the needle beams would go to help support the office on the second floor.  This is where the entire 40’ wall or span was going to be removed to make the new opening. 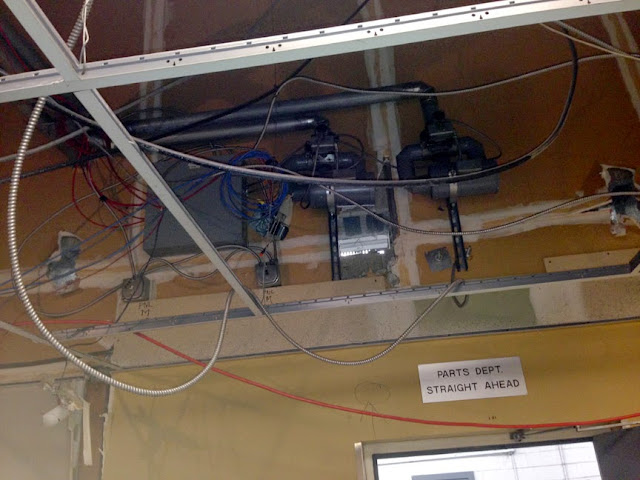 First obstacle – the electrical up in the ceiling hiding behind the ceiling tiles had to be moved.  Yes, moved.  We needed to get our high load frames and kip shores up there. 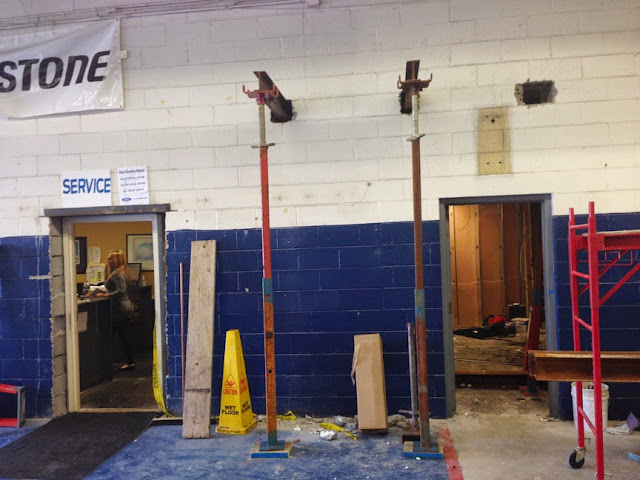 Ths is the start of the shoring.  Needle beams support the offices on the second floor while the demoliton goes on below. 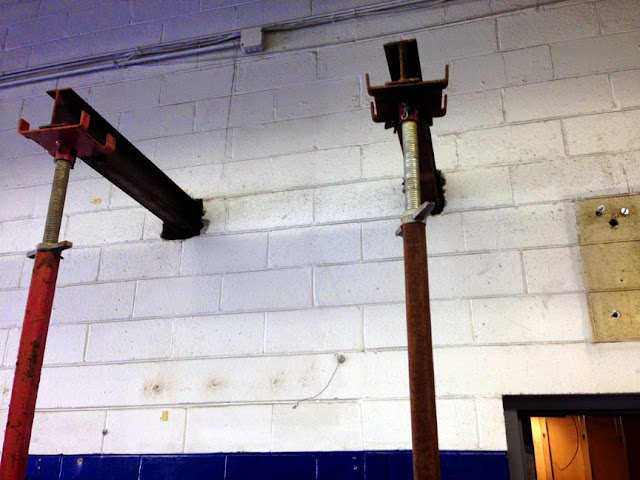 The other end of these beams need to be supported as well. 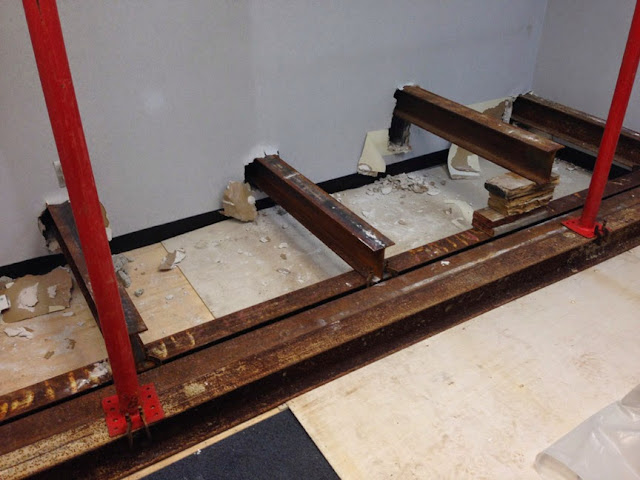 Up on the 2nd floor, these are the other end of the needle beams that we saw sticking out of the wall at the service bay.  They are now part of an elaborate shoring system that also carries the weight of the roof.  I hope this makes sense.  It’s like a giant 3 layer cake all supporting each other. 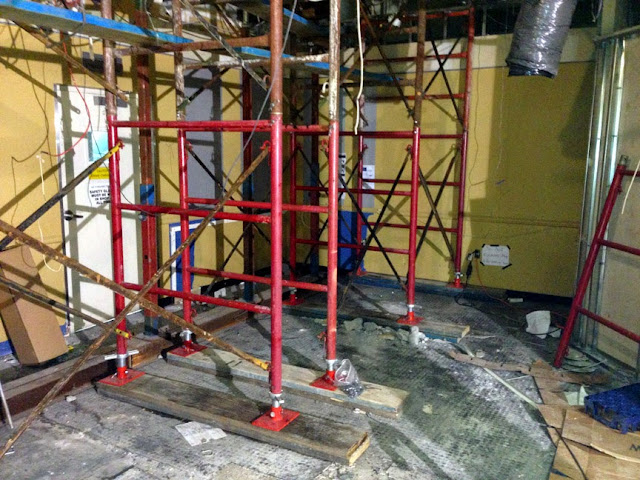 These Hi-Load frames are carrying the second floor bar joists. 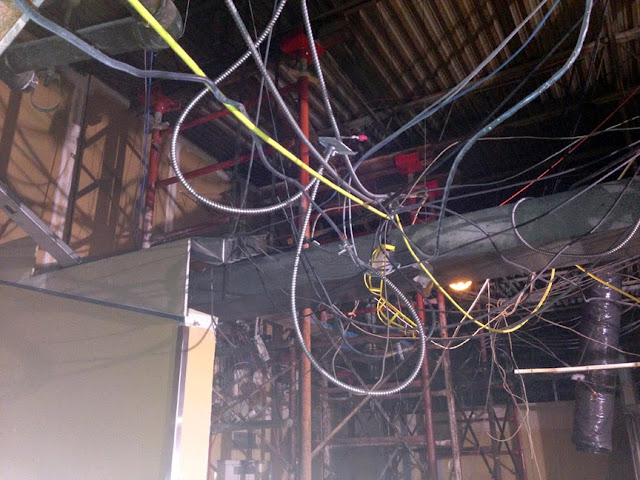 You can see the spaghetti electrical we had to work around or in some cases, have moved. 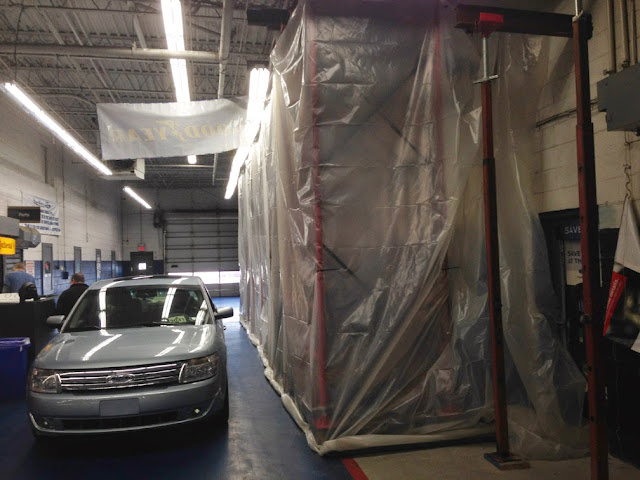 The containment wrap is up and the wall is about to be removed.  Remember, this is all while the service bay remains open for business. 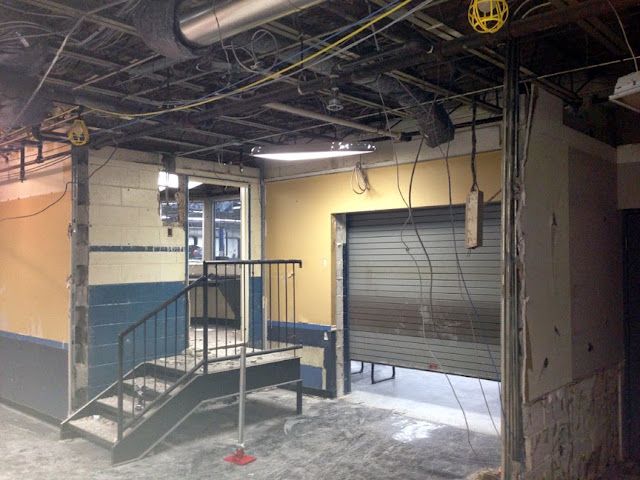 There were actually two areas in the service center that were being expanded and this was the second.  These walls were being removed as well to make an open area and offices. 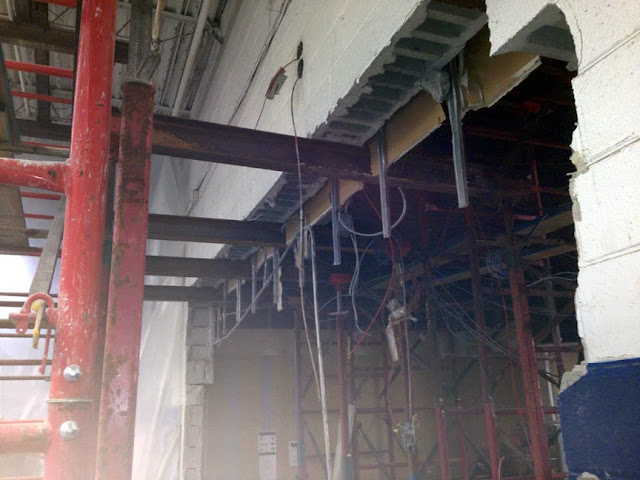 The wall has been removed.  You can see the beams, frames, and post shores holding up the floors above. 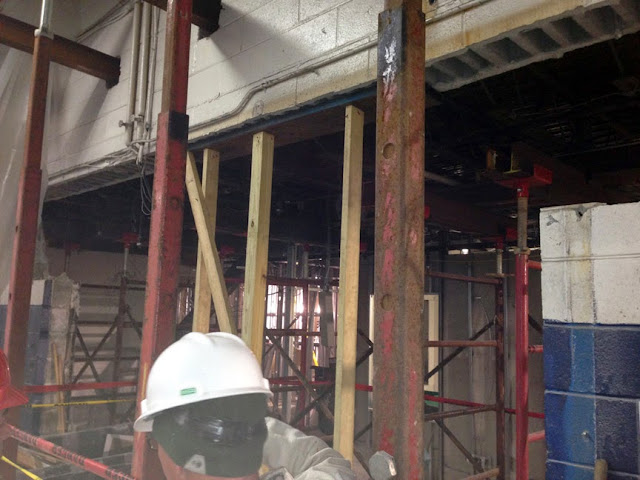 This is where the real fun begins.  Second obstacle – After the wall was demo’d engineers realized that the standard support beams would not be enough for the new addition and crews were brought in to dig/remove/excavate enough room for helical piers. 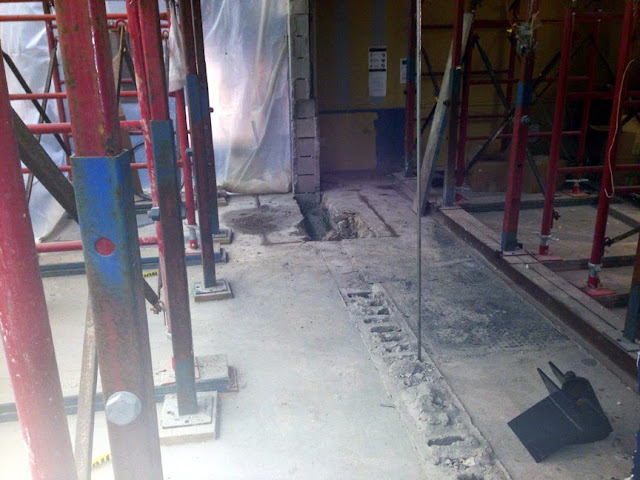 What is a helical pier?  Well, glad you asked.  A helical pier is a steel shaft, usually square with helices, similar to a large screw that provides a foundation support for various types of structures. Helical piers are often used when challenging soil conditions prohibit a traditional foundation system. They are also commonly used to correct and support existing foundations that have settled or failed. 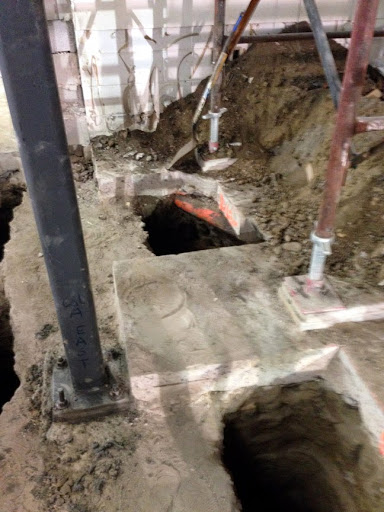 The purpose of a helical pier is to transfer the load of the structure through the unsuitable soil to a stronger, more suitable soil deeper in the earth. Helical piers are a deep foundation solution. 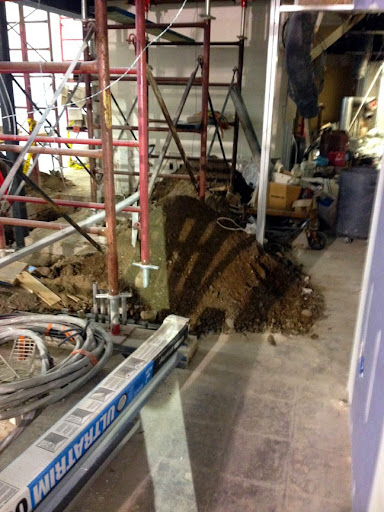 And that’s exactly what we had here – difficult soil conditions and the need to correct an existing foundation.   We had to make room for the excavators while still supporting the floors above.  Surprise – our small shoring job has just grown exponentially. 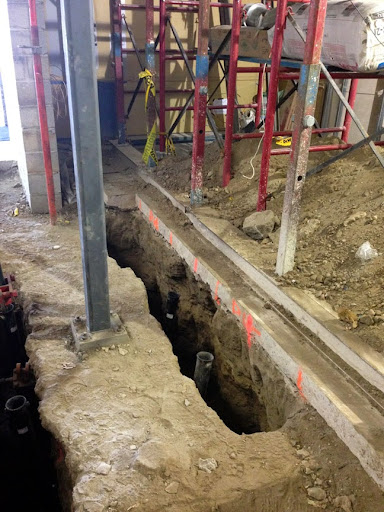 Here you can see where the crews took jack hammers to the existing floor and dug trenches for the helical peirs.  You can even see the helices in the dirt in the trenches.

Third Obstacle – Our biggest concern was that the crews digging and removing dirt and cement would compromise the integrity of the ground supporting the 2 floors above. 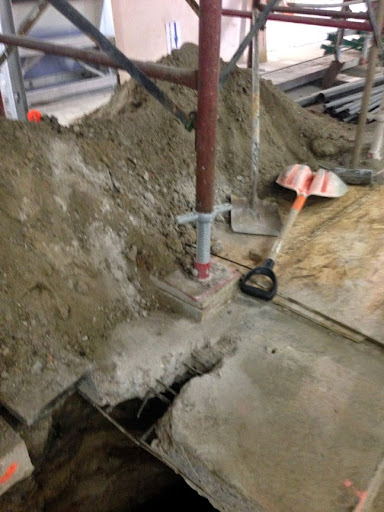 You can see just how close our frames were to the holes. 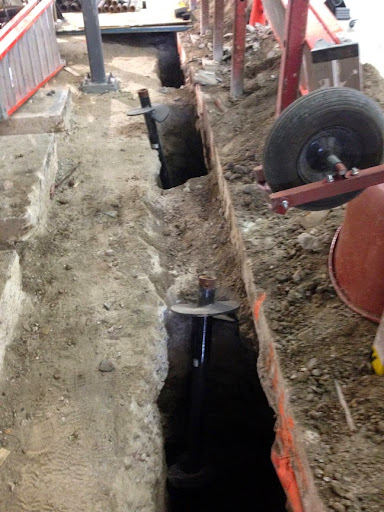 Here is a closer shot of the helices buried in the soil.  The are kind of like giant augers. 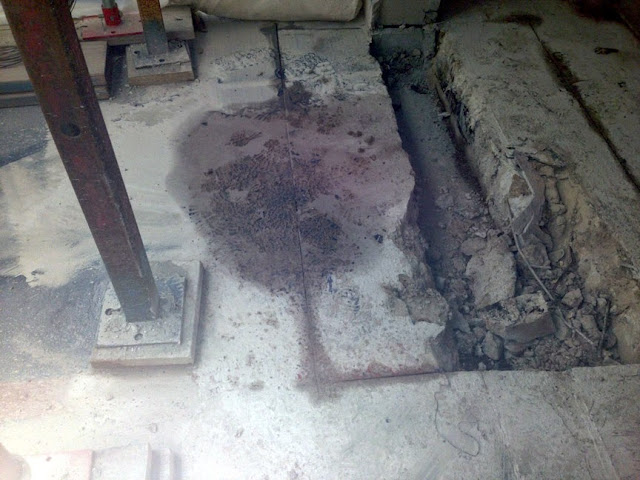 And this shot shows the scoring in the cement where the new helical pier is to go once it’s dug out. 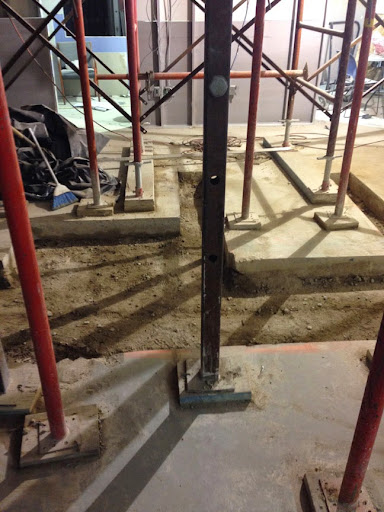 And here is a nice neat shot of the troughs for the new cement and helical piers – all around our shoring posts. 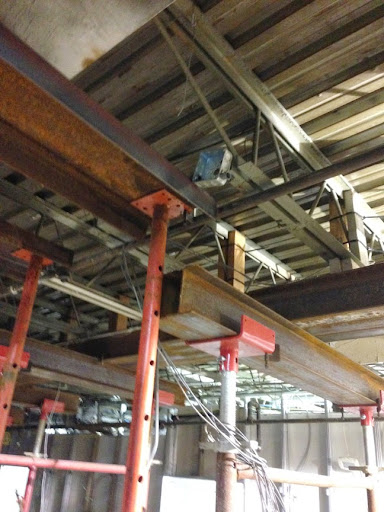 And above – support everywhere. 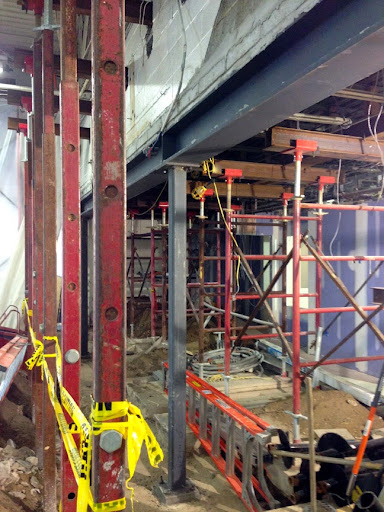 New steel support beams are in place – awaiting the concrete and helical piers to be completed. 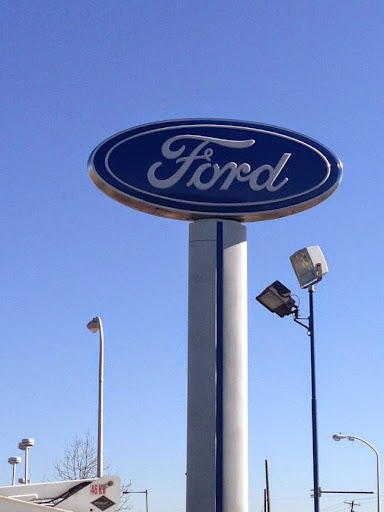 When life gives you lemons – throw Ford trucks at it. 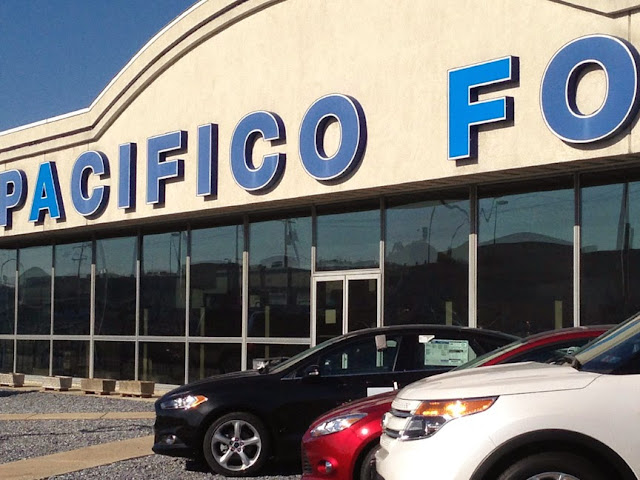 In the end, the new bay looks great and the offices on the right side are in and running smoothly.  Proving once again that Superior Scaffold is truly built Ford tough.  Crews and engineers overcame all of the obstacles and challenges thrown at them to get the job done right.

Call Pat for your next job – he promises to bend, shape, morph and adapt as needed – although, he’d prefer to have most of it worked out ahead of time.  Heck, wouldn’t we all.

You can also see more pics of this job here.