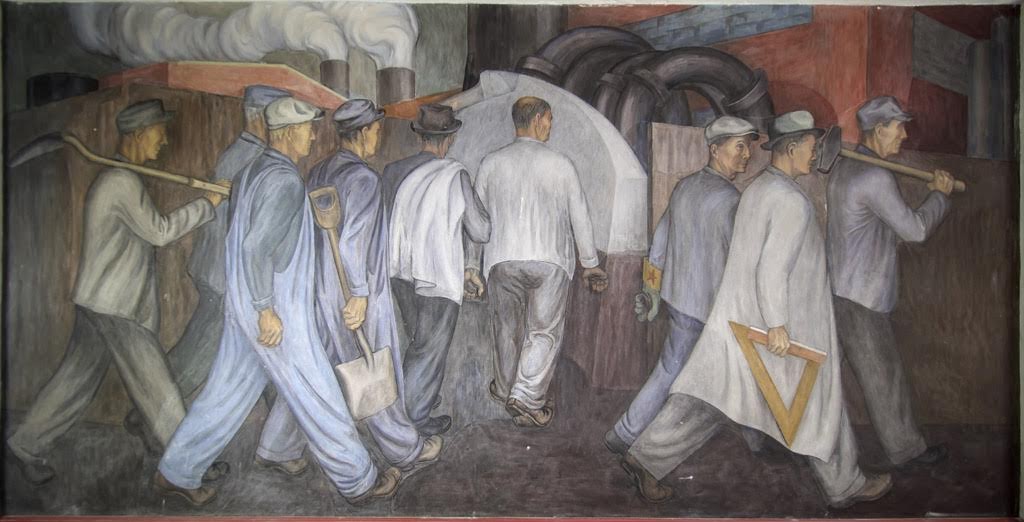 Most of the time when people tell you “out with the old and in with the new” it’s a good thing. Technology has advanced, building practices are more efficient, materials are better – you name it. And they are usually right. But sometimes when you are making that switch something from the past grabs you and holds on. Maybe it’s a memory from an era long gone or maybe the craftsmanship is unparalleled or just maybe there is something unique and one of a kind about it. Which is what we have here. 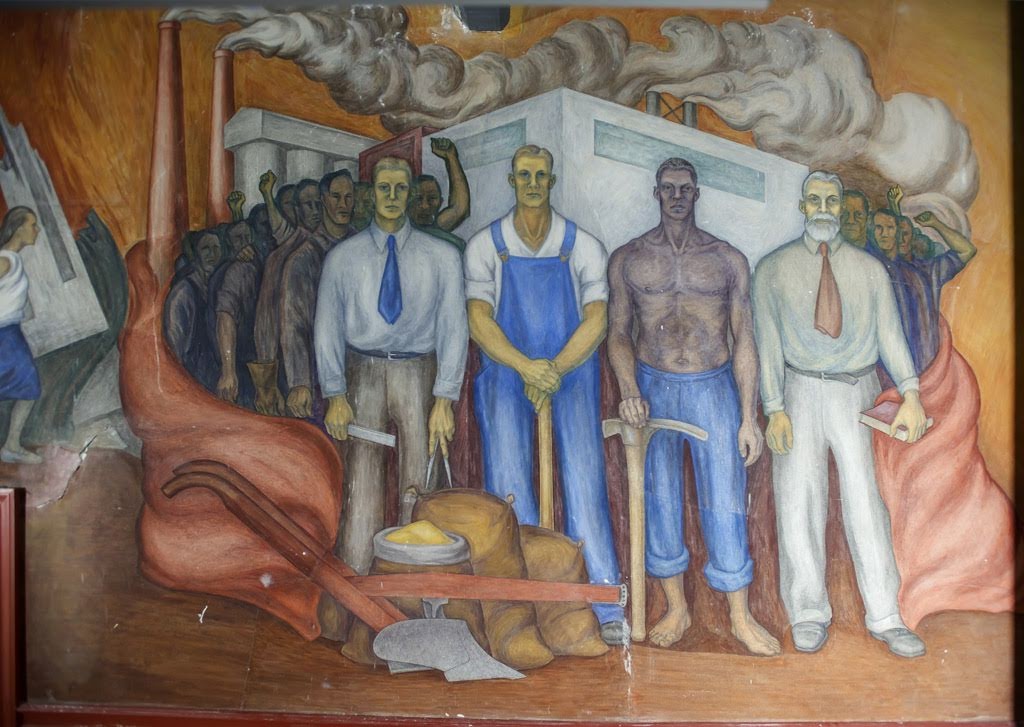 You see, while Swarthmore College was preparing to demo an old building and construct a new one they realized that they had some very unique pieces of art in Hicks Hall that could never be duplicated. So they decided to move them to a new building that actually houses the drawing and painting studio. Fantastic. But these fresco’s, painted by James Egleson (class of 1929) in 1938 were on plaster and there was no easy way to get them down and out safely. This project had an incredibly high level of planning and design, to make sure they weren’t damaged in the move, long before we got involved. 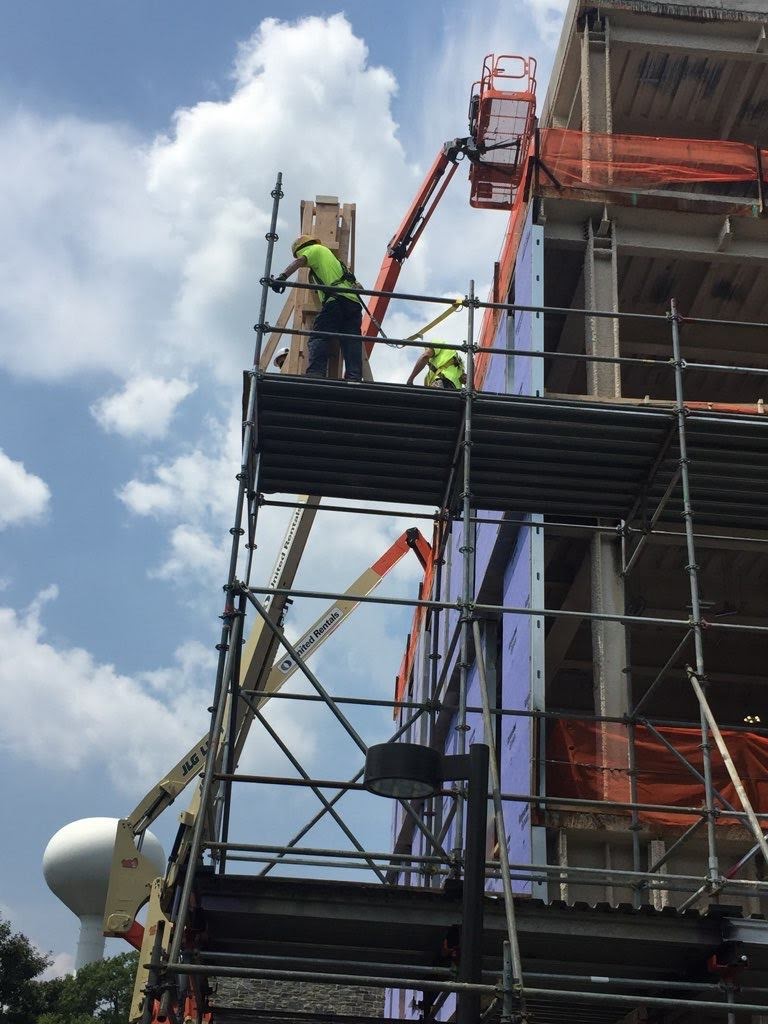 Superior Scaffold was called to not only erect a canopy in between the two buildings, to protect pedestrian traffic, as the new one went up and the old one came down but they also needed a way to get the giant pieces of plaster out of the building and down to the ground where they could be transported to their new resting place. 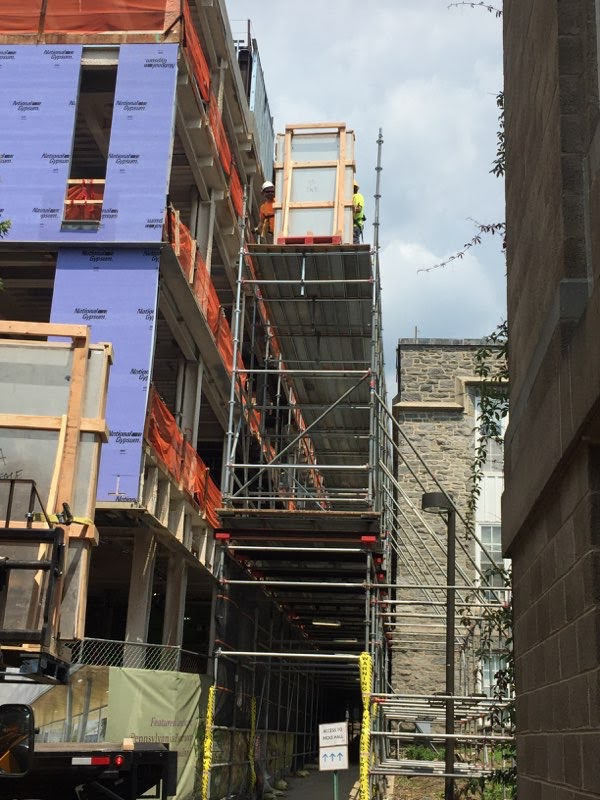 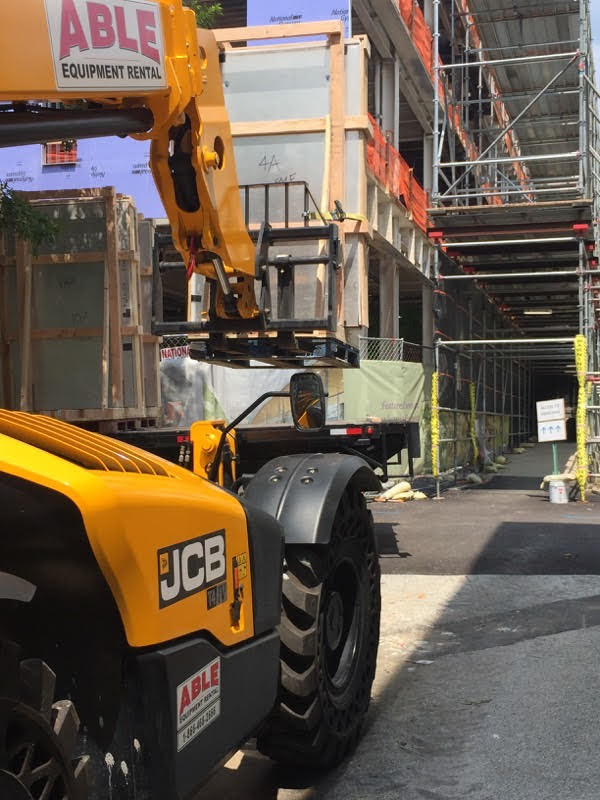 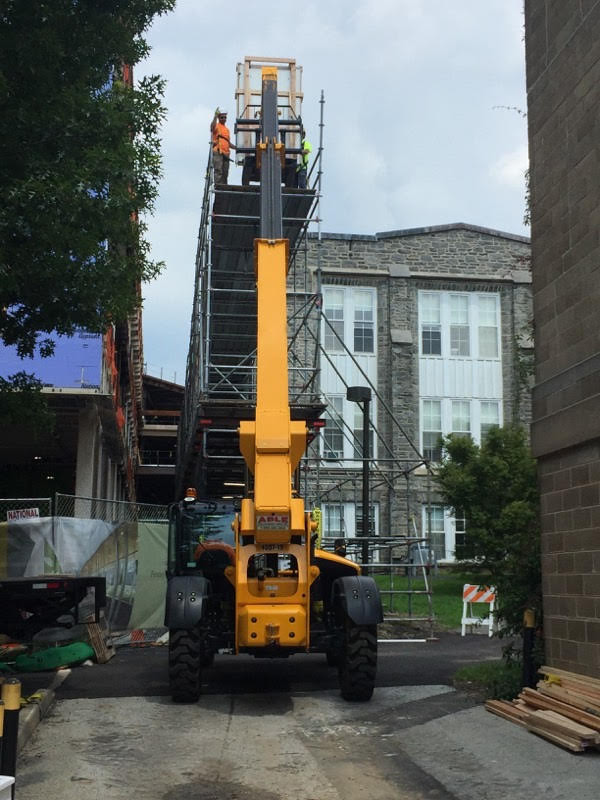 One unique feature of the scaffold was that we couldn’t tie into the side of the building in all of the places so we built back up towers that essentially make the scaffolding wider at the base and become push anchors. 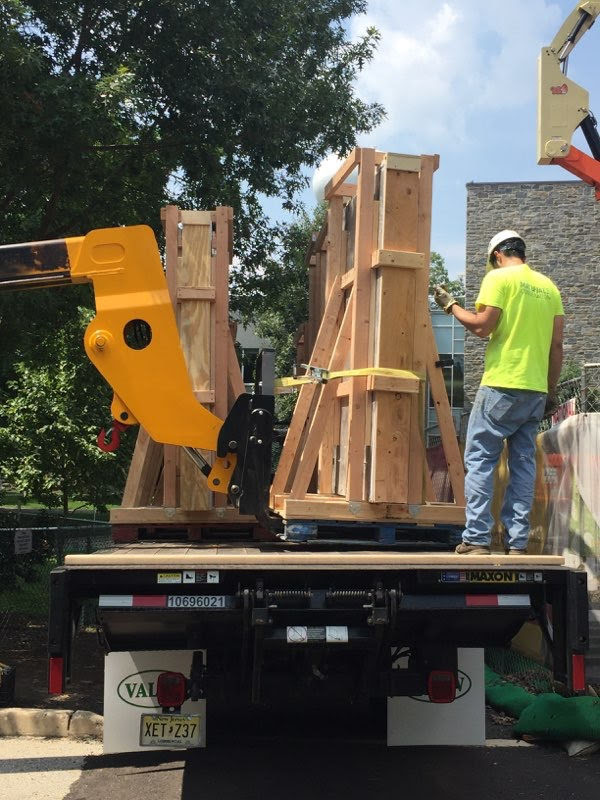 The murals were done on plaster in 30’s by an alumni of the college who studied with Mexican muralists at the time of WPA projects. And since they were on plaster the utmost care had to be used to get them out and down. There were 4 walls worth and they ended up taking them down in sections. The Biggest was 11’ X 7’, the rest were approximately 7’ X 5’. They installed an aluminum honeycomb epoxy material on the back and a mesh on top and then crated them. 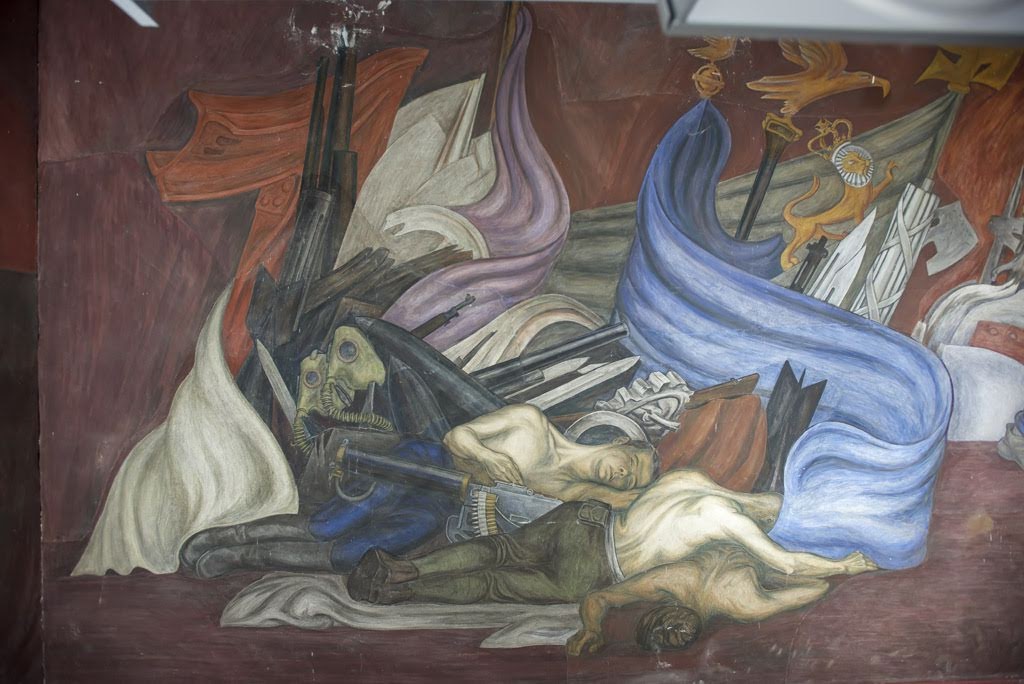 In his own words, “The frescoes at Swarthmore depict conditions and concepts out of the life of our times in America. Painted in a building devoted to the teaching of engineering science, out of which has developed industrialization as one of the orienting conditions of modern life, most of the work deals with the effects of that condition upon human beings, ourselves and our fellow-men. The murals do not pretend to give a factual account of those effects, nor to tell a story. Rather they are a dramatization of the human values involved, of the people of our times in the struggles and aspirations that constitute the fundamental realities of a civilization and a culture.”

Superior used great care to make this transition as seamless as possible. The job went just as planned and the frescoes will enjoy life in their new building. 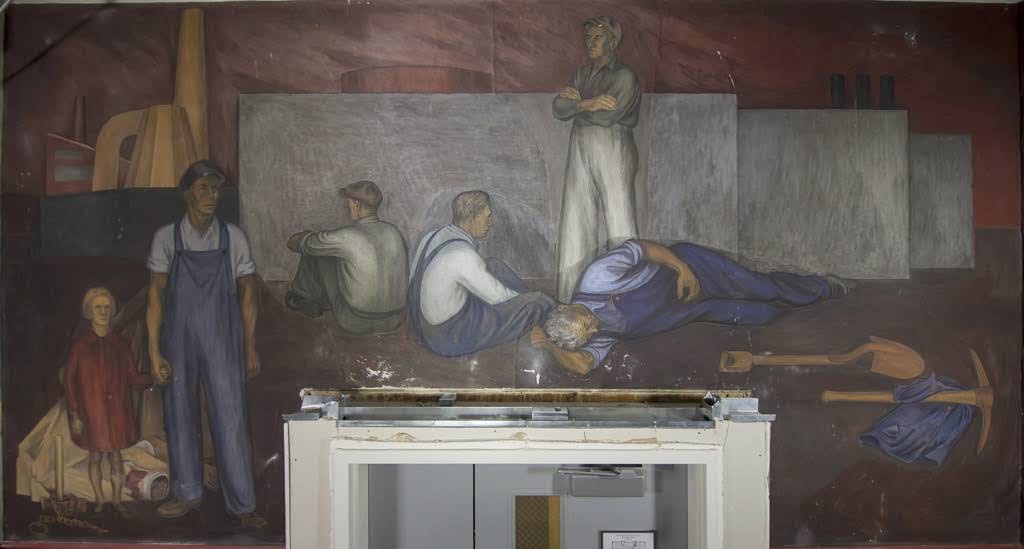 If you have a job that needs a delicate touch and skills that are hard to find, in fact, like master craftsmen from a gone by era – call Pat at Superior Scaffold today at (215) 743-2200 and he’ll take care of you. Or visit www.superiorscaffold.com for more info. 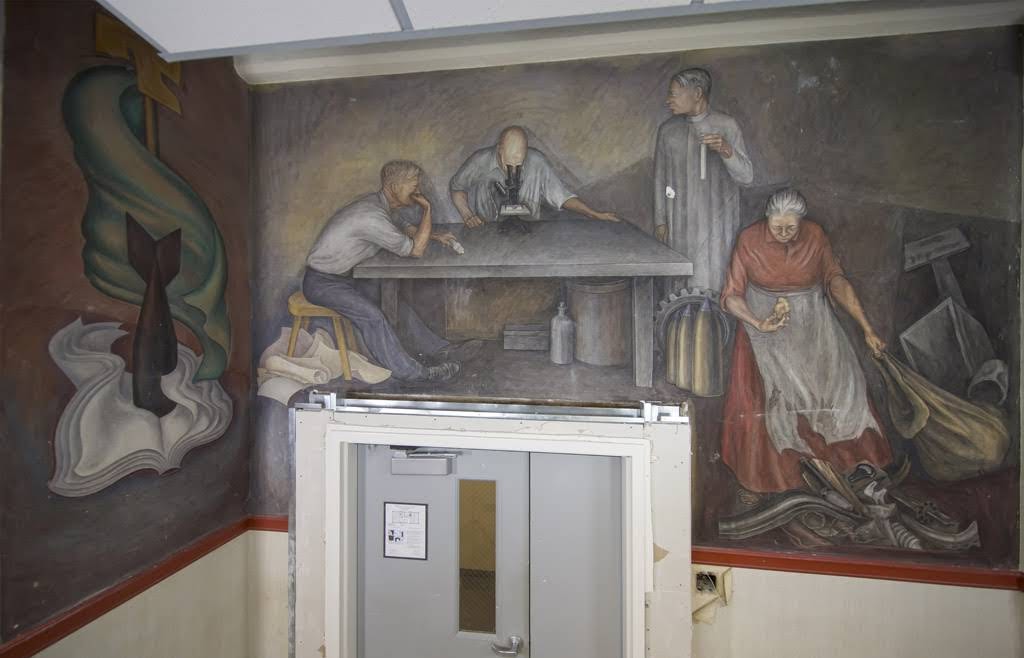 And today’s musical selection is for the bossman – He’ll get the Hicks reference.

And for Pat – we go a little further back to a diametrically opposed musical genre.

More on the paintings here.