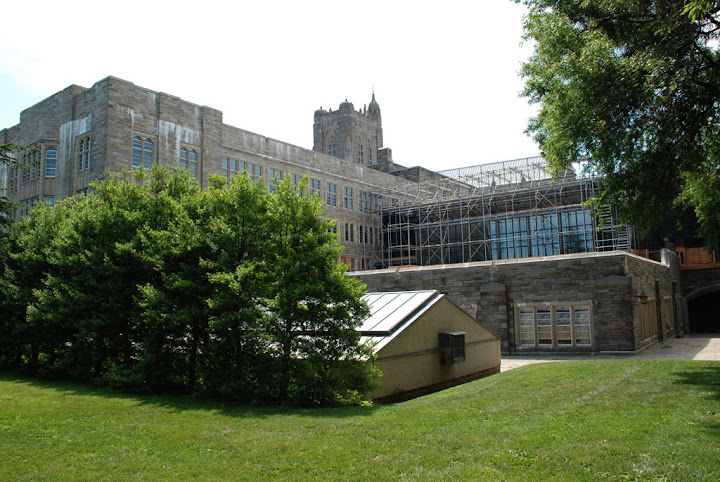 Yes, we are already on phase 3 of the renovations at the Firestone Library on the Princeton University campus. Crews are replacing the entire parapet around the top of this floor of the library. 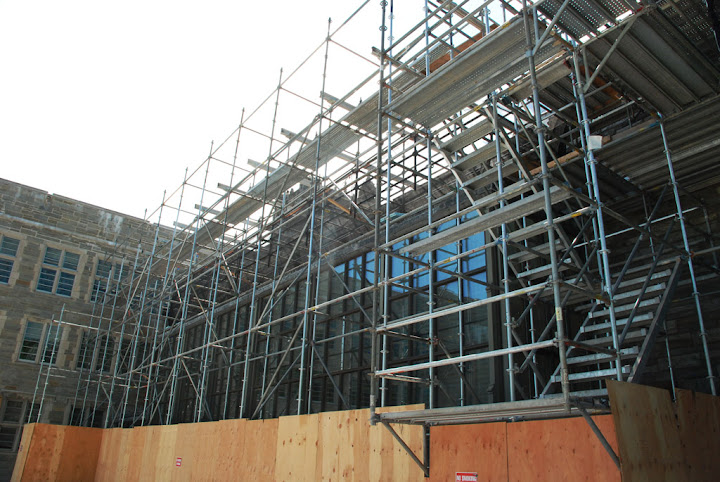 Each time we do a phase it presents a new set of challenges. This was a unique scaffolding job, in that, we literally had to design and build it from the top down. That was because of the glass windows or façade on the North side of the building, directly over the library. 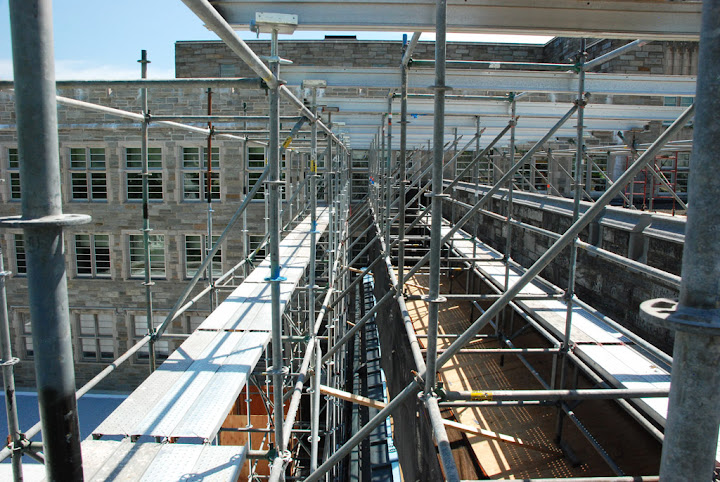 Crews needed access to the entire parapet and that included the portion over the glass windows. They also needed a place to store the incredibly heavy replacement stones while they were put into place. 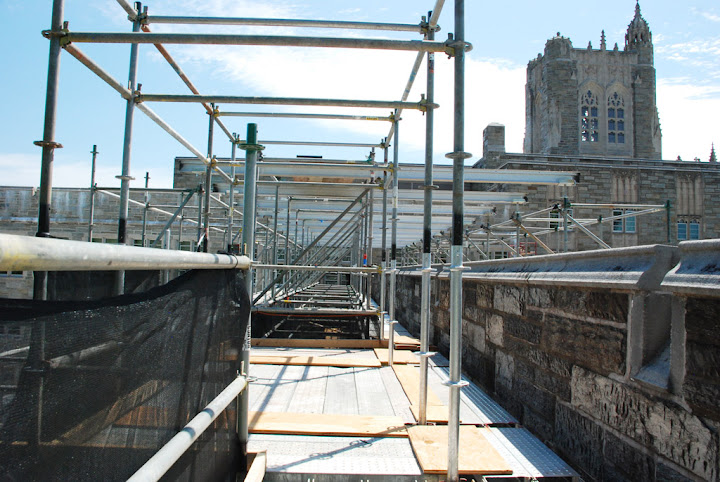 Superior Scaffold foreman, Ken Foreman, came up with a truss system similar to the type we would use under a bridge or dock. This would allow the weight to suspend from trusses above so that nothing would touch the glass atrium below. 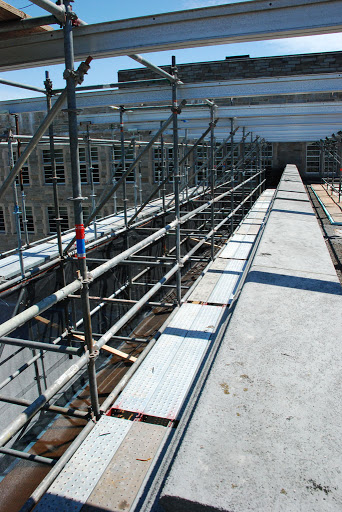 This out of the box thinking gave the crews the necessary impetus to design and build the rest below. 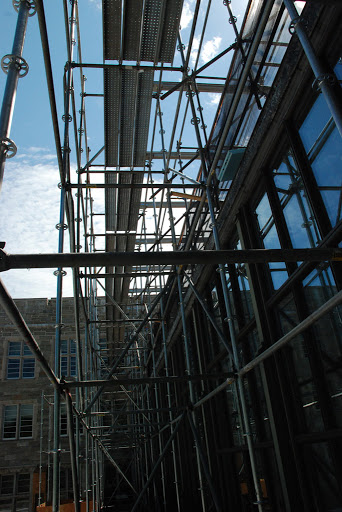 They started with towers on each side of the atrium or glass – one that extended all the way to the ground or other roof roughly 20’ high and the other tower from the top roof 7’ high. 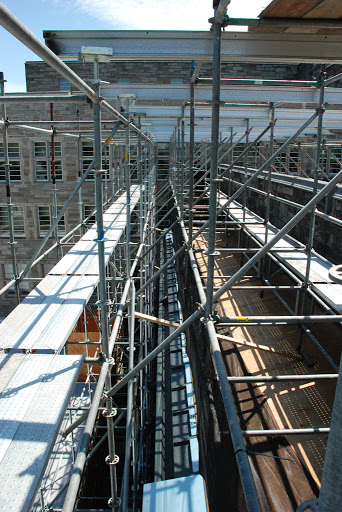 They used 16’ aluminum beams to cross the 14’ span and then designed a system scaffold to hang from the beams below.   That scaffolding, in turn, supports a series of trusses that keeps the entire scaffold floating above the glass windows. 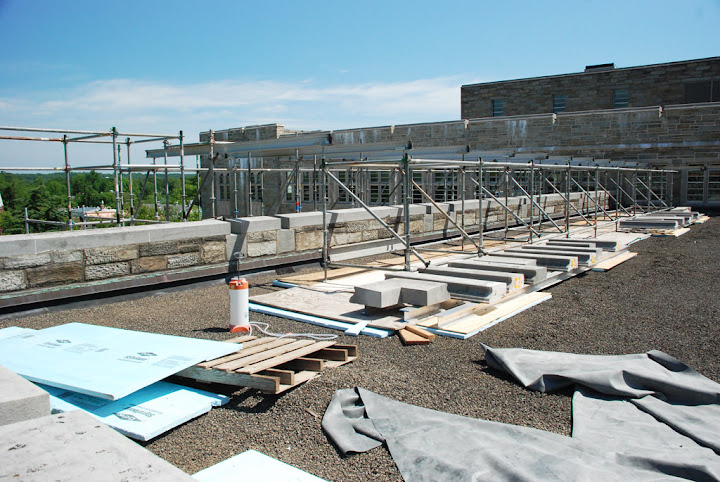 Decking was then put into place to allow crews access to the parapet for replacement. 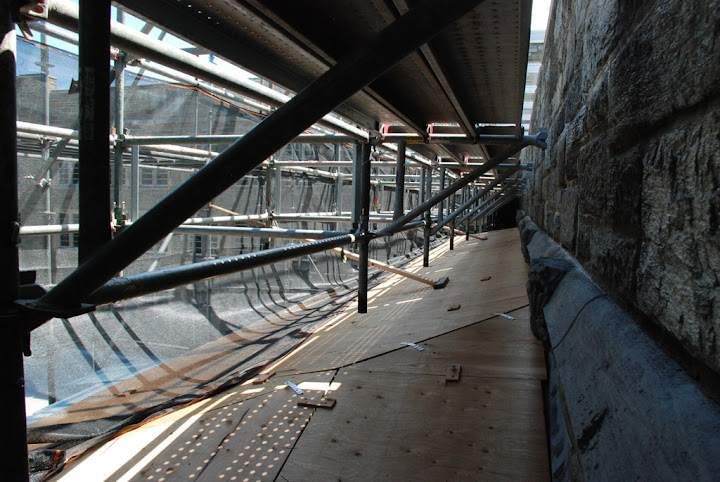 We then used system scaffold around the entire section of library. Debris netting, wood panels and fencing was used for protection. 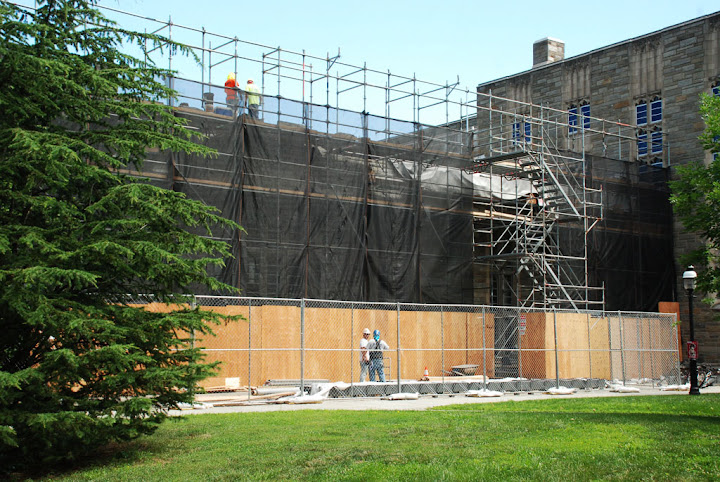 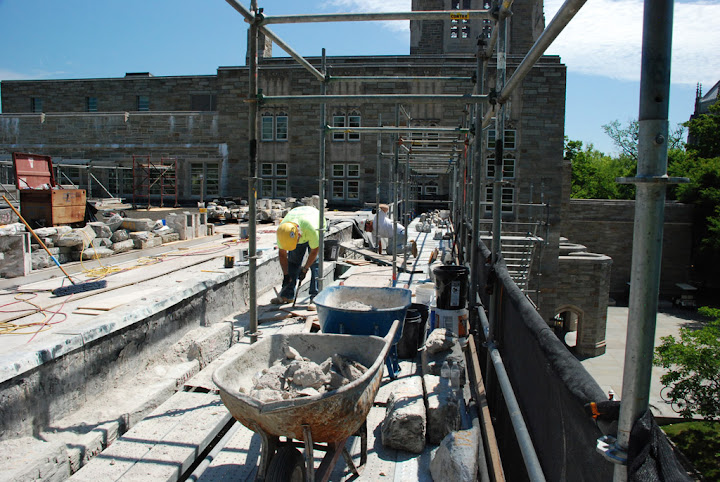 We added a Beta Max hoist to lift the stones from the ground to the crew up at the top. 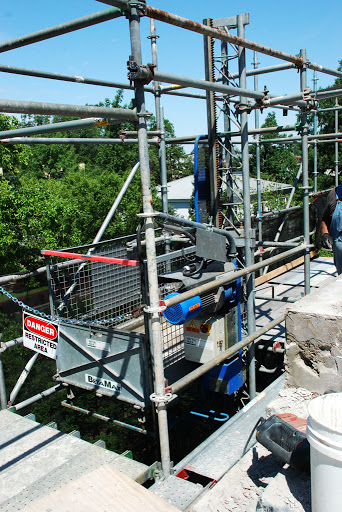 Here you can see the masonry crew from Joseph Dugan working on the parapet. They are removing the old stones and replacing them with new ones. 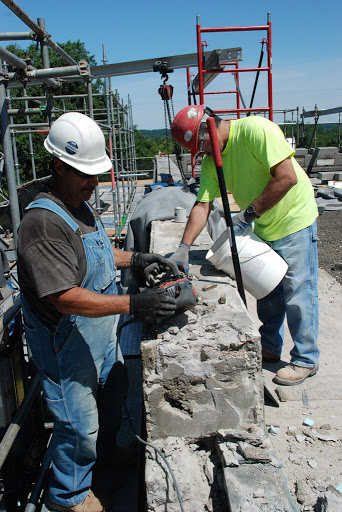 They are doing a fantastic job. It really looks great. 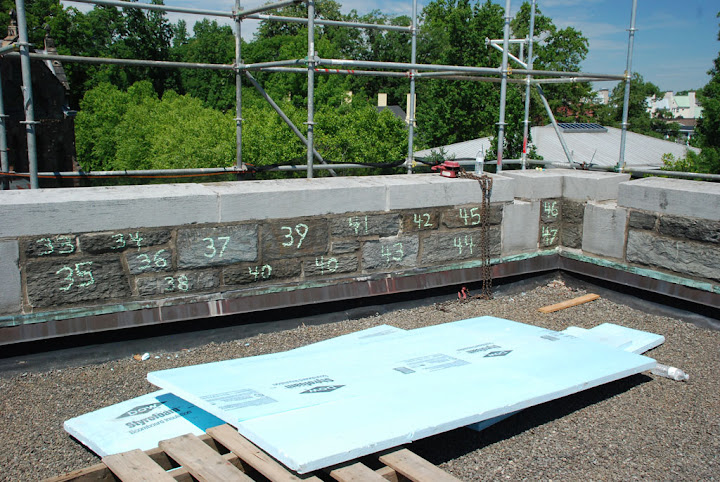 This is an historic building (and on the prestigious Princeton campus) so we had to tread lightly. You will see that we never tied to the building and used the utmost care when erecting any scaffolding around the grounds of the library. 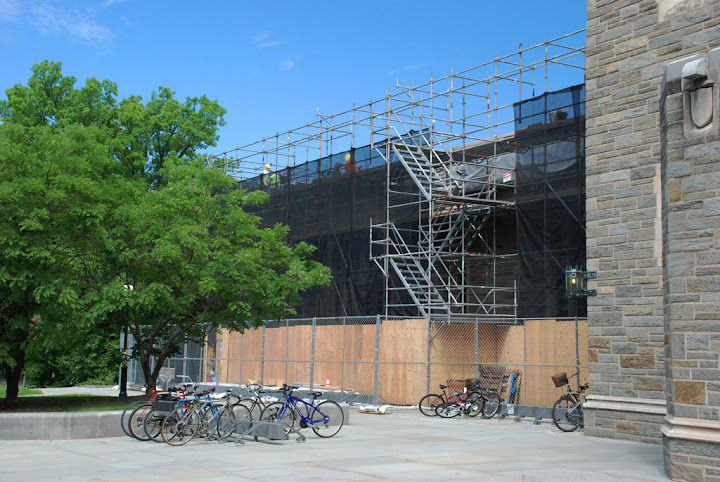 The first two phases have really brought this magnificent building back to its former glory and we can already see that phase 3 is adding another dimension to the overall renovation. 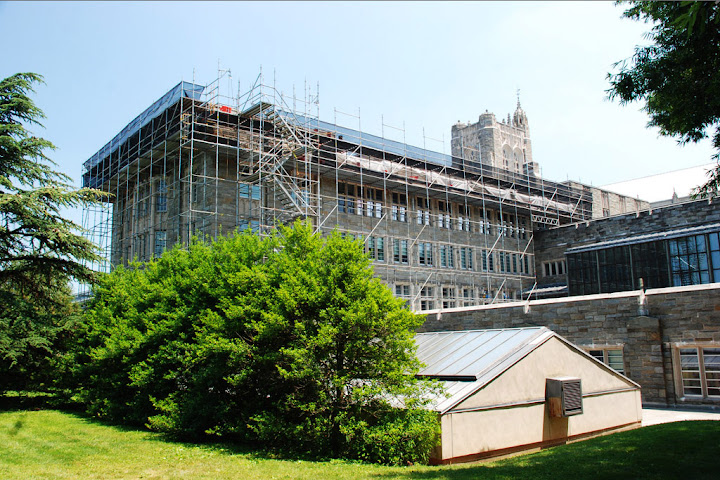 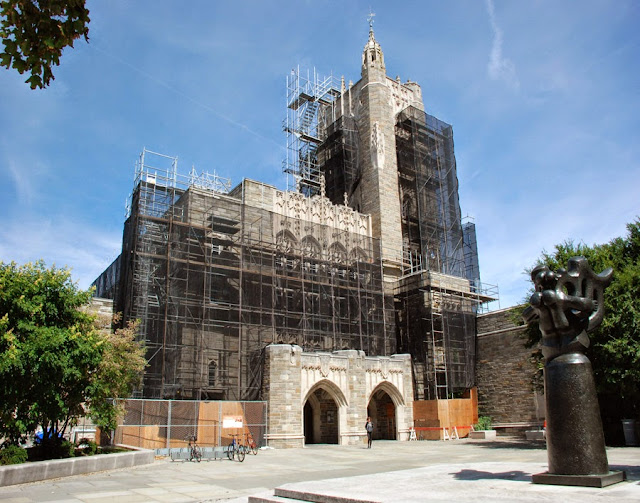 You can read about the first two phases by clicking on the pics above. 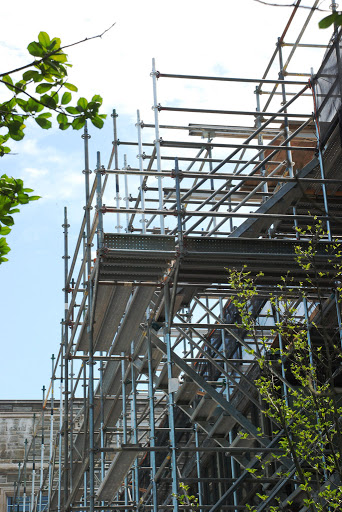 Superior specializes in working on historic buildings. We are experts at making sure everything is just the way it was when we started. 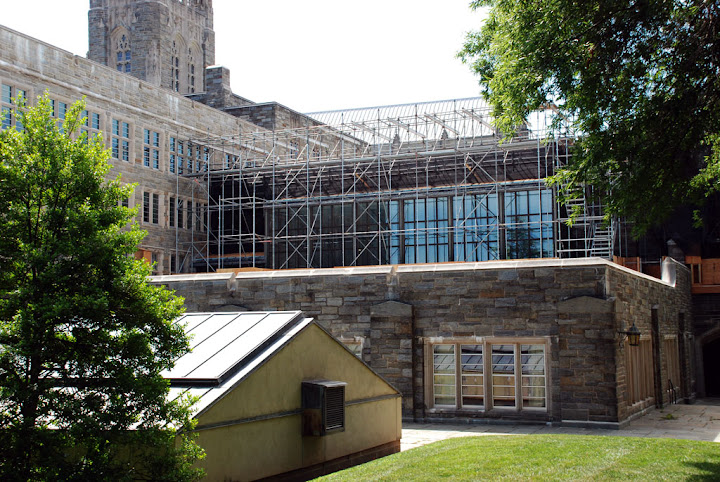 If you need out of the box thinkers who get the job done call Superior today at (215) 743-2200 or visit www.superiorscaffold.com to see more of our work. 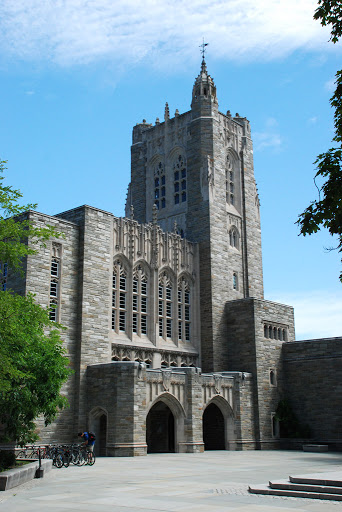